Moving cross country, and we just bought a house. Moving in hopefully in a couple of week or so. Need to make a decision on internet quickly.

It appears that AT&T here (Birmingham suburb) does not have fiber in my new neighborhood nor are there any other fiber options I can see. The main cable internet provider is Charter Spectrum, which doesn’t thrill me but the other option is someone I’ve never hear of (Kinetic by Windstream?) Both of these offer “Gig” internet speeds, most importantly with no data caps. Spectrum states their “Gig” is 940 Mbps.

Questions: Has anyone experienced near gig internet service over cable? I didn’t know you could provide that fast via cable.

Second question: It appears my beloved Orbi system doesn’t support speeds this high. What are the current options? I have found, after years of buying a new router and access point every year or so, that the Orbi worked perfectly so I’d prefer a mesh system.Hardwiring the house isn’t an option at the moment.

I have near-gig speed over cable via RCN (PA east coast). They sell it as 1GB, and its close enough. Last time I checked it was around 890-960Mbps download, thats where it tops out, and up to 50Mbps upload. Very Fast overall. Around $110 per month with taxes, VOIP, and modem rental costs. No bandwidth limits.

I did a quick google, Orbi should be ok with these speeds, depending on your model and the most recent firmware. What version do you have right now?

That’s good to hear, thanks. Spectrum is about $95 per month with no bundle, which I can live with.

Sure, gigabit cable works fine. If you have any choice other than the evil Spectrum or Comcast that isn’t much more expensive or much slower, go for it.

Did the ISP mention your upload speed?
I read more into the Orbi setups, and it seems you will be getting anywhere from 250 Mbps to 500 Mbps max over wifi , depending on your hardware.

Also this thread will make @krayzkrok die a little inside. :)

My former company in NYC used Windstream for biz Internet. They resold fiber Internet. They’re a pretty big ISP. It’d be worth comparing what options they provide vs Spectrum.

Good info on Windstream, looks worth at least investigating them rather than just dismiss them. In our small town up in Iowa we had a more local provider (Premier) who had superb customer service, best I’ve ever experienced, knowledgeable local people who would look at the data while you were on the phone and provide very accurate and helpful information and support. I was very glad to not have Charter or Comcast for the last 10 years.

Well the polls are in, and it’s not looking good for @lordkosc! (sample size n=cough) 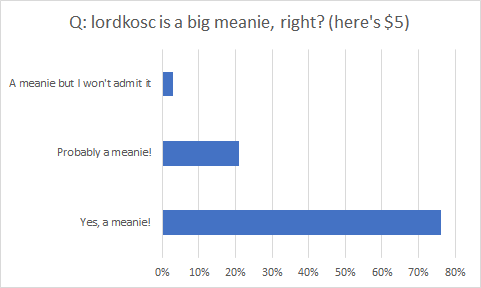 I envy people who actually get any choice in ISP. Where I am, it’s Comcast cable or…well, that’s it, unless you can stomach the slow, iffy, and altogether icky satellite options. In Burlington they have a nice fiber system, but outside of there, the state’s coverage is spotty. Not enough people (something like 600k total), rough terrain, lots of areas where houses are widely spread out across crappy dirt roads, no industry, no money. Makes for a very unappetizing market for the providers.

Comcast and ATT only here, and they refuse to compete with each other. Sucks.

They may well be in collusion, but it’s also possible they simply can’t realistically compete. Depends on how the physical infrastructure was laid out and where the copper already is and who owns it, maybe. It could be a situation where ATT for instance was there first, and Comcast has already taken advantage of whatever local requirements for asset sharing are in place, and there’s just not any economical reason for them to do more.

I know here the problem is cost–no one competes with Comcast because they’d have to install costly new infrastructure and run lines in some cases miles down a dirt road to get to one house, stuff like that. Not worth their dime to try. This is what happens when an essential service is seen as yet another commodity only.

AT&T and Verizon are of course evil, but their malignancy is nowhere near comparable to Comcast or Spectrum. It’s like comparing Captain Hook to Pol Pot.

I have AT&T fiber 1 GB unlimited and to be honest, it is the main reason I stay with AT&T. With bundles and discounts it costs me around $75 a month and has been the most reliable connection we’ve experienced over the years.

Yep, I pay $75.48/month for symmetric gigabit fiber from Verizon. It works great and they haven’t hiked the price on me. Yet, anyway.

Yep, I pay $75.48/month for symmetric gigabit fiber from Verizon. It works great and they haven’t hiked the price on me. Yet, anyway.

A few years ago they tried to hike the price on me. Giving out the 80/month gigabit triple play deals to new customers and asking me to pay $180. Threatening to cancel didn’t work. I left for Spectrum for 3 months and then came back as a new customer for 80 bucks. Still at that price after 3 years.

Charter is going to get data caps soon it looks like- they just petitioned the FCC to allow it today.

With no competition, here we pay what Comcast asks, or go without. For phone, decent but not stellar speed Internet, and cable with no premium channels, it’s like $250/month. And no way around it if you want HD content, which of course, you do. Each part of the “bundle” isn’t terrible on its own, but the add-on fees, surcharges, and baksheesh adds up. And unbundling isn’t an option because once you get done with finding three different providers you end up spending about the same, plus a lot more hassle. And no, we can’t depend solely on our cell phones (the Verizon bill for two of us is a reasonable ~$80 a month)j because cell service is spotty.

It appears that, for now, Charter will be the only real option for anything that’s not DSL or Satellite (neither will be acceptable.) I’ll be getting internet only; we’ve moved from Dish to Youtube TV (plus a couple of other streaming services) and we haven’t had a landline in a long, long time.

Looks like the introductory price is about $90 a month for 940 Mbps. I can live with that. I have a hard time seeing how any service can put on data caps and survive IF there is any competition, based on how people use the internet these days (gaming, streaming services, etc.)

Whats the price after the introductory period?

Every market varies, and it can be negotiated down a little.