Iran sponsoring terror in continental US? 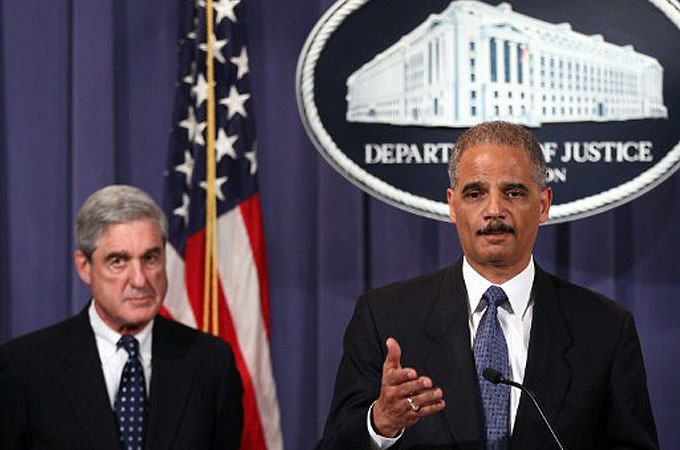 US links Iran with plot to kill Saudi envoy

Tehran has rejected the allegations and complained to the UN of politically motivated "warmongering".

US authorities have charged two Iranians in a “plot directed by elements of the Iranian government” to kill the Saudi Arabian ambassador to the US as part of a major terror attack.

“Through the diligent and coordinated efforts of our law enforcement and intelligence agencies, we were able to disrupt this plot before anyone was harmed. We will continue to investigate this matter vigorously and bring those who have violated any laws to justice.”

Holder said the plot was “conceived, sponsored and directed from Iran”.

The plot also allegedly involved an attack on the Saudi and Israeli embassies in Washington.

The US has filed criminal charges against Manssor Arbabsiar, a 56-year-old naturalised US citizen holding both Iranian and US passports, and Gholam Shakuri, an Iran-based member of Iran’s Quds Force, the Justice Department said.

Damn, if this is true I dont know what we do about it. I dont know if an attack like this would be an act of war but it seems to be damn close to one.

Time to get out the drums.

Hey everyone still has enough money to invest in the military industrial complex now, right? We can get the economy going again. This is brilliant!

After the outright lies of the Bush administration in their justifications in attacking Iraq (remember, I’m one of the few who didn’t want to go to war back in '03 because I didn’t believe their bullshit), I’m going to be a bit skeptical. I’m hearing a bit too much Iran “chatter” in certain circles right now - it’s coming off as a pretext for yet another bombing of more brown people.

Of course, this is at least more plausible than a Saddam and Osama love-fest, so if it’s not true (huge, huge IF statement there, folks) at least the government is getting better at fabricating justifications.

With the war in Iraq coming to a close and Afghanistan reaching a stalemate (or quagmire), it’s time to find a new enemy to launch missles at. Iran seems about as good as any, I suppose.

This will probably turn out to be yet another FBI entrapment of idiots.

I think one just has to be glad Bush isn’t still in the White House. The bombers would already be in the air.

I’m going to be a bit skeptical. I’m hearing a bit too much Iran “chatter” in certain circles right now - it’s coming off as a pretext for yet another bombing of more brown people.

Iranians aren’t brown people. No need to imply color based racism in this case.

So IF this is true and the government of Iran was behind this what do you all think we should do?

There are things that can be done short of military action, and given Iran’s shaky economy they might hurt more than a token bombardment.

There are things that can be done short of military action, and given Iran’s shaky economy they might hurt more than a token bombardment.

I thought we already had pretty much all the economic sanctions we could against Iran.

Bombing Iran would just unite their people against the US. Even though I tend to lean conservative, I’m just as skeptical as Blackadar about anything our government has said since 9/11.

I have pretty much lost faith that the US government will be upfront and honest with its own people and I don’t see it changing. I don’t know why I ever had faith to begin with since so much that has been done on the foreign front since WWII has been based on deception and lies.

A complete trade embargo in concert with the EU would be devastating to Iran’s economy.

I wonder what the heck they thought they would accomplish?

Bombing Iran would just unite their people against the US. Even though I tend to lean conservative, I’m just as skeptical as Blackadar about anything our government has said since 9/11.

I am skeptical as well, which is why I have prefaced everything ive said in this thread IF this story is true. Some response would have to be made economically or some other way IF the story is true.

A complete trade embargo in concert with the EU would be devastating to Iran’s economy.

Yes it would be, but I cant see the EU going along with that because of all the oil Iran exports.

Well, the only thing new about this story is that it happened in the US instead of somewhere else. Iran (especially through Hezbollah which is essentially an arm of the Iranian Revolutionary Guard) has a long history of plotting to blow up other people’s embassies. The April 18, 1983, United States embassy bombing was a suicide bombing in Beirut, Lebanon, that killed 63 people, including 17 Americans. The victims were mostly embassy and CIA staff members, but also included several U.S. soldiers and one U.S. Marine Security Guard. It was the deadliest attack on a U.S. diplomatic mission up to that time, and is considered the beginning of Islamist attacks on U.S. targets. The attack came in the wake of an intervention in the Lebanese Civil War by the U.S. ... International incidents The attack on the Israeli embassy in Buenos Aires was a suicide bombing attack on the building of the Israeli embassy of Argentina, located in Buenos Aires, which was carried out on 17 March 1992. 29 civilians were killed in the attack and 242 additional civilians were injured. On 17 March 1992, at 2:42 pm (UTC−3), a pick-up truck driven by a suicide bomber and loaded with explosives smashed into the front of the Israeli Embassy located on the corner of Arroyo and Sui... The AMIA bombing was an attack on the Asociación Mutual Israelita Argentina (AMIA; Argentine Israelite Mutual Association) building. It occurred in Buenos Aires on 18 July 1994, killing 85 people and injuring hundreds. It was Argentina's deadliest bombing ever. Argentina is home to a Jewish community of 230,000, the largest in Latin America and sixth in the world outside Israel (see Demographics of Argentina). Over the years, the case has been marked by accusations of cover-ups. All suspects ...

Why on earth would they be doing this in the first place? I can’t imagine what they hoped to accomplish.

Maybe it was going to be a false flag attack… maybe it was some whackos. I am under the impression that the Iranian state isn’t really cohesive and that there are a number of semi-independent tendrils that have the capacity to undertake the alleged plot.