Damn it! The game crashed and now my save file is corrupted. It won’t load! So demoralizing.

Don’t delete or overwrite it. Try sending it to the dev and see if they can help:

its says u r loading a save from outdated build. it may contain errors. It wont load after that message

Interesting, mine crashed today As well. Just stopped responding on the graveyard screen. Lucky my save worked and nothing was lost.

I completed the regular difficulty yesterday and feel conflicted. The run gave me the feeling that on the higher difficulties there will only be a few strategies that actually can deal with the enemies on any given floor. Seems a waste when there’s a lot of potential combos.

To illustrate, by the time I got to the final boss I had a lvl 30 ghoul with a Gluttony’s Tongue who trivialized most fights on the floor all by herself as long as the supporting team had a mummy for clearing debuffs and two stance breakers. Didn’t even matter if they died or not once the ghoul got her lunch stacks going.

The final boss was trivial, seeing the ghoul snacked herself up to near guaranteed 500 damage crits, which led to an anti-climatic two-shotting of said final boss.

The run gave me the feeling that on the higher difficulties there will only be a few strategies that actually can deal with the enemies on any given floor.

I don’t believe that’s the case at all. There are a lot of different teams and strategies go through the game with. People have their favorite teams but many are viable.

Right now I’m going though the dwarf level (3rd level) with a team of shade-liche-dark knight that are all around level 22. It’s been very effective. Shades are incredible in this game. Liches are a lot of fun too. It’s very rare that I don’t end a battle with full health for all my troops.

They all have the jawbone item equipped that gives a boost to attack when an ally dies. Since the liche is summoning and sacrificing skellys many times a battle, by the end of the battles my troops can do monstrous damage. This team a primarily a sanity attack team and once I have a character’s sanity down the shade can one-shot them with their voidclaws skill.

The key to dealing with the dwarves with this build is to make sure you prioritize taking out the bards first if they are in the enemy party. If not, they will keep undoing the damage you do. They’re a pain. There are also a few other units that can be a problem. I use the shade’s blacklight skill to give them -40 accuracy for 2 turns and interrupt their stances as needed. I also have some nice artifacts that give me some secret spells (like chain lightning) and +16 to spell power. Combined with the Iratus skill that gives me +24 to spellpower when rage is at 100, I can one-shot problematic enemies as needed.

There are many ways to play and win this game.

Mmm, good does NOT always win! Got that difficulty down and I think I’m about through with this. A worthy entry in the genre for sure, as the missteps are more than outweighed by what they did right. The game got significantly easier as it went even at the higher difficulty, and the first time I came out of the Barracks in good shape the last two levels were sort of a cakewalk. So if you’re having trouble with dwarves or whatever, know that if you can figure out a way through it, there’s a pretty clear path.

For what it’s worth, my favorite team ended up being Unfrozen - Bride - Widow - Blood Phantasm. Has tools to handle about everything and enough protection/heals that I don’t think I switched any of my main four out the entire last area. I could see some other teams working just as well or better, but that worked great for me.

Greetings, necromancers! Hope you're going well and your summertime is not sad! We prepared for you update, including new features for difficulty levels system, a present — summer skins for Mummy, Shade, Blood Phantasm and Lost Soul, and usual...

Make sure to get your free cosmetics.

I bought this because it’s been on my watchlist for a while, and Steam nudged me, just after it featured in Tom’s top ten list.

I am enjoying it. Only on Baby difficulty though, and only on the first floor.

I’ve returned to it. I’ve got one run on the final floor, but it is a real slog as I usually can only win with a solitary minion or two. So, I then have to rebuild and spec the replacements.

So, I started a new game and went straight for the Vampire Maker spell and got myself three Vampires, which will open up that Minion for my other run. I also finally finished off the bone collection to open up the Bone Golem. I’m now searching for Dhampirs to get them converted to open up that minion as well.

That leaves only the Shade and Ghoul that I can pick up prior to winning one of these runs on More Pain to release the final two minions.

Only on Baby difficulty though, and only on the first floor.

The fact that this has baby mode is something I love about it. It’s everything I enjoyed about Darkest Dungeon, minus the excessive grind. I pre-ordered the DLC that they’re working on, which I seldom do.

So I sort of stumbled onto what I know now to be a basic sanity build.

I have a Wraith and a Banshee inflicting sanity damage and a Dark Knight basically always in the stance that inflicts further sanity damage whenever an enemy gets a debuff.

And my 4th slot is for a Bride or a Zombie, for some ranged killing.

Also, that map is just…not appealing.

Still, I am quite enjoying this.

Then again, at root, there’s a lot about this game I don’t really “get.” I like the idea, but combat choices don’t seem to carry a lot of meaningful weight in general. Maybe that’s just because I have no idea what I’m doing, though.

Well I’ve so far only had a handful of fights, but one of them was a tough dwarf, and I just sanity attacked him. He melted, before doing any damage.

Edit: also, sanity seems to be a very good way to disable the enemies. So, it’s basically crowd control versus slaughter.

Then again, at root, there’s a lot about this game I don’t really “get.”

Yes, very much this. But I am enjoying the puzzle.

This game did make me think there is room for a game best described as:

By which I mean:

Then add, from AoW:

edit: Basically, a more polished, better version of an already existing and quite enjoyable game:

The in-game tutorial and help explain the four possible consequences of loss of Sanity: 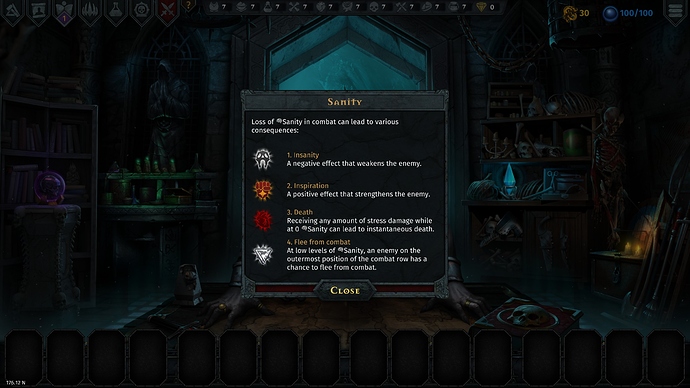 On Cakewalk difficulty, though, Inspiration is disabled.

On a fundamental level I can’t figure out why I would ever do sanity damage when I could do actual damage instead.

Some enemies have lower Sanity than Vigor. Plus, although both Physical and Magic damage reduce Vigor, Physical can be reduced by an enemy’s Armor and nullified by an enemy’s Block, and Magic by an enemy’s Resistance and Ward. There’s no inherent way for an enemy to reduce or nullify Sanity damage.

It seems significantly easier to get Dread (which is what sanity damage is based on) buffed than attack. Also, enemies have armor (versus physical damage) and resistance (versus magical damage), but don’t seem to have an equivalent stat to reduce sanity damage. I might be wrong about both of these things.

This is an issue where the lower level and lower difficulty areas aren’t showing me any of the reasons why I’d use a particular thing, isn’t it? That is, on cakewalk and level 1, at least, there really is no reason I’d bother with sanity damage because none of the mechanics that make it important are present yet.

That is, on cakewalk and level 1, at least, there really is no reason I’d bother with sanity damage because none of the mechanics that make it important are present yet.

I can only speak to my extremely limited experience, which was that it was no quicker to bring them to zero on sanity than it was on health, and the result was often that they just continued attacking like nothing had happened. Perhaps they were weakened, but still, dead is clearly better.

I’m starting to suspect that Cakewalk is so easy that decisions are functionally consequenceless, so it’s impossible to figure out how anything works. I’ll restart.

I had the same experience. By the time enemies generally had high enough defenses to make me consider sanity as a general tactic, half of them were constructs or otherwise immune anyway. I had enough to capitalize if enemy party sanity went down due to crits or if an enemy reduced its own sanity for buffs, but otherwise ignored it.

I keep looking at this. It is near the top of my summer shame (“sale”) shopping list. I bounced off Darkest Dungeon each time I tried. Slay the Spire didn’t grab me. I am holding off on Monster Train until the Switch version. I really liked Monster Slayers and played it a fair bit on multiple platforms. I just can’t decide if I should give Iratus a try.