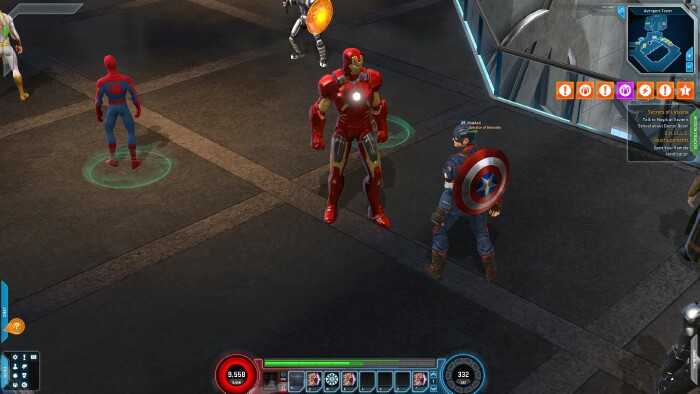 If you're missing Iron Man or Captain America from your stable of Marvel Heroes characters, you can get one -- not both! -- of them for free by entering TEAMCAP or TEAMIRONMAN on the redeem code page..

Before the jump, is TEAMIRONMAM Iron Man's mom?

Sadly, most of Iron Man's myriad costumes are slight recolorings that apparently represent some specific revision of the suit that only massive Iron Man nerds would know or care about. There's only a couple (the Hulkbuster on the right, for example, or the really early prototype next to that) that are all that different or interesting. I'm not sure Iron Man even has a full Enhanced costume (with different voiceovers and such), although the Hulkbuster has slightly different animations and sound effects.

PS: Also use TEAMCAPMB or TEAMIRONMANMB for a Mystery Box. Of mystery.

Heh. Looks to me like Gazillion are totally favoring Captian America because he gets to have a fancy shield but poor Iron Man has to just stand there empty-handed.

That's Mrs. Teamironmam to you!

That disco outfit is when Steve Rogers gave up being Cap for awhile. He called himself Nomad, and wore that costume. He'd become disillusioned w/ the gov't (this is around the time of Nixon) and didn't want to represent it with his costume.