It's a small world after all in Tiny Epic Kingdoms 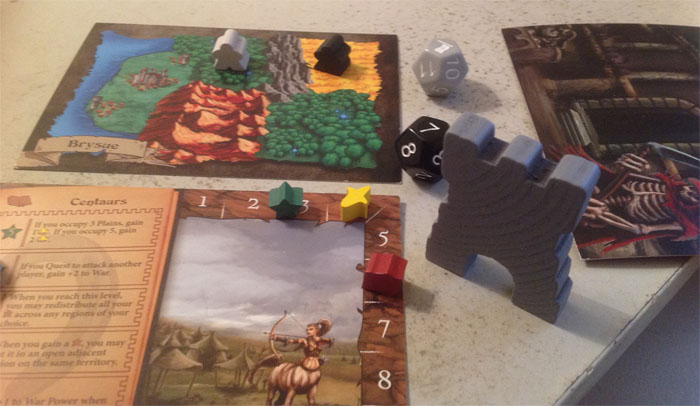 Tiny Epic Kingdoms occupies an all-too-small niche of games that are short, but not dumb, not utterly random, or not thinly themed..

I guess there is some kind of minor trend for these micro games. I got into Eight Minute Empires and it was cute but of course it didn't really have the staying power either. I haven't played the Tiny Epic series but it looks like they're just a notch up in complexity from the Eight Minute series.

Though this might be a way to trick people into playing longer games. Start with Tiny Epic then have Cold War: CIA versus KGB --or the Star Wars version-- and as some kind of cruel/awesome twist have Greenland there. It's also a small box, no need to be intimidated right? ;)

Is it really in a small box, though? I'm looking at that photo and it doesn't seem all that small. Games like these absolutely need compact boxes because they're excellent travel games. When Fantasy Flight put Hobbit Stratego in a giant box they basically ruined half the point of the game.

So how big IS Tiny Empires?

In the bottom pic you can see the box next to a pair of sunglasses. So... fairly compact.

For some reason I can't seem to get a sense for how big that really is, though. How big is the face of the person with those sunglasses? Are they Tom's? Or Dingus'?

Here's the stuff in the box: https://meeplescorner.co.uk/bl...

Thanks. Wow, that's a lot smaller than it looks in the picture. Tom has a big face!

Although it's larger in scope, I had the exact same "bubble gum flavor" experience with Terra Mystica. The entire enjoyment is in figuring out the strategy for each of the different races.

Unfortunately, once you do, every game plays the same as you follow the same strategy. The interaction between players is minimal and positioning or the randomness of the bonus tiles will never change your strategy, only set up minor speed bumps to following it every game.

I've been enjoying Through the Ages recently. It's a Euro without falling into the "multiplayer solitaire" or "victory point salad" trap that's typical to the genre.

Pretty nifty. I'll give it a try.