And in the game

Ha! I think you have my 2020 year in review pretty well summed up.

I also get to solve strange murders as HP Lovecraft in Arkham Noir: Case #1 – The Witch Cult Murders. Set collection, while keeping an eye on the in game clocks and investigator stability running out.

Got to try it tonight and it’s a neat little game! I like the way the cards you play on a case tell a mini story that you get to build up in your head.

Alas, while I solved the case of Frank Elwood’s murder with a ceremonial knife, his friend Arsenath Waite’s disappearance from the Miskatonic library remains a mystery.

And the strain of my discoveries while investigating a child’s disappearance near Meadow Hill eventually proved too much for me when I met a monster. 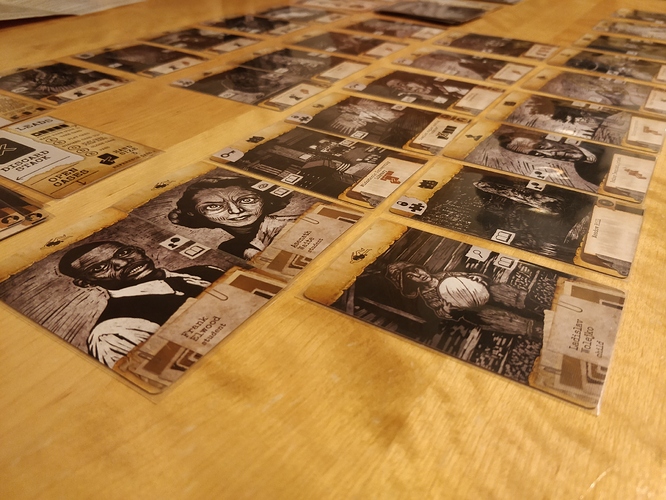 I lost to a stability check, but getting there was a nice little puzzle.

Sundays are for going insane or dying to scary monsters.

My investigator dove back into Arkham Noir: Case #1 – The Witch Cult Murders tonight, determined to solve the case before the perpetrators of those seasonal murders disappeared for another year and the trail grew cold.

Unfortunately, he wasted time assembling the big picture behind the crimes (got 2 suspect puzzle pieces instead of a different type of clue). His frantic search for the final piece of the puzzle led him on a wild chase started by a mysterious phone call. The ensuing discoveries unsettled him enough that, by the time the dark man of the with cult showed up, his already frayed nerves gave up and the case ended in failure. 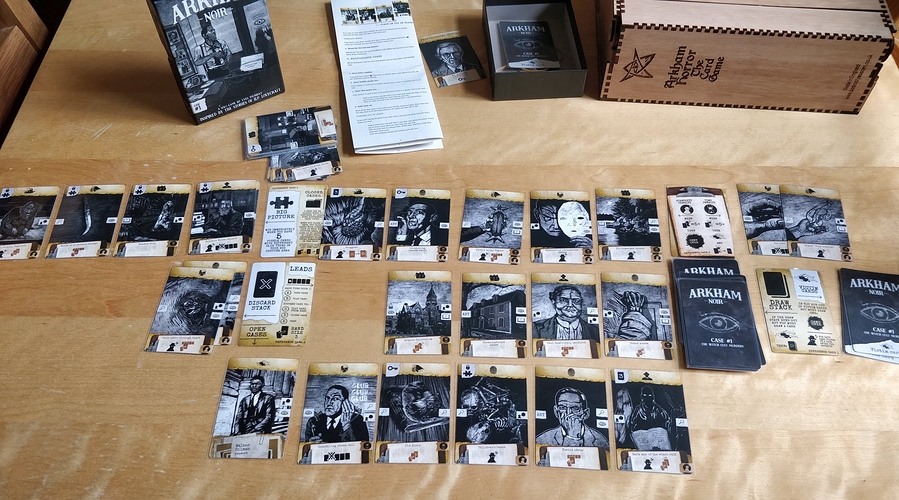 I enjoy the puzzle in the game a lot. But I find that I really focus on the icons, card links, set building and often forget to tell the accompanying story in my head. When I look back after, I can then appreciate the details of the case. So it doesn’t detract, but it keeps the game quite abstract.

Next, I travelled to a grim fantasy world where my party and I got attacked in the depths of a dungeon. With all my party dead, my equipment destroyed and only my bare hands and a bit of willpower left, I set out to emerge from the depths and avenge them in Unbroken.

The game makes such a great initial impression on the table. It takes no time to set up. the double layered resource management boards are great. The art on the cards is grim and evocative. And the sense of hopelessness and scrounging for every resource before time runs out permeates the resource management based gameplay. And it all fits in a tiny box. 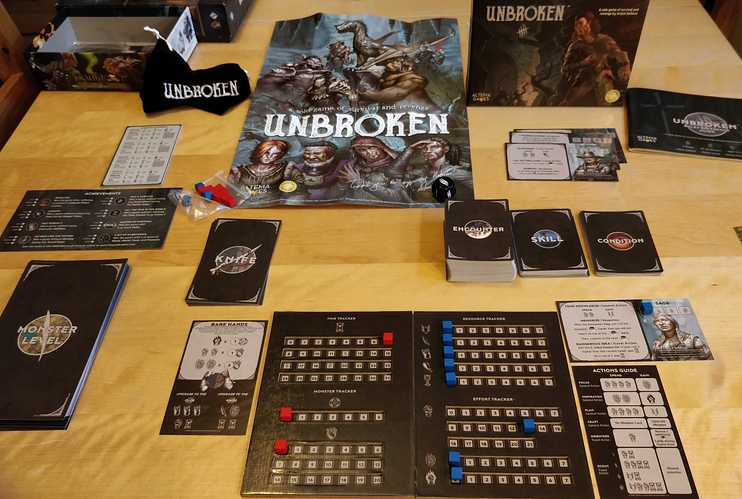 The set up literally takes a couple of minutes and you are off for an ascent from the bowels of a murderous dungeon. Each floor is a race against time to find the resources you need to gather energy and equipment to fight the floor boss. Take too long, and they ambush you, leading to unpleasant consequences.

Your energy throughout the run is called Effort. It’s hard to come by, hard to upgrade to more powerful versions and will also deplete if you can’t feed yourself after a boss fight. Run out of effort and you die.

My Sage character was cunning. Armed with her spear, she made it all the way to the final boss. But cunning is no protection against poisonous Wyverns. And so she died within a throw of the spear of the exit. 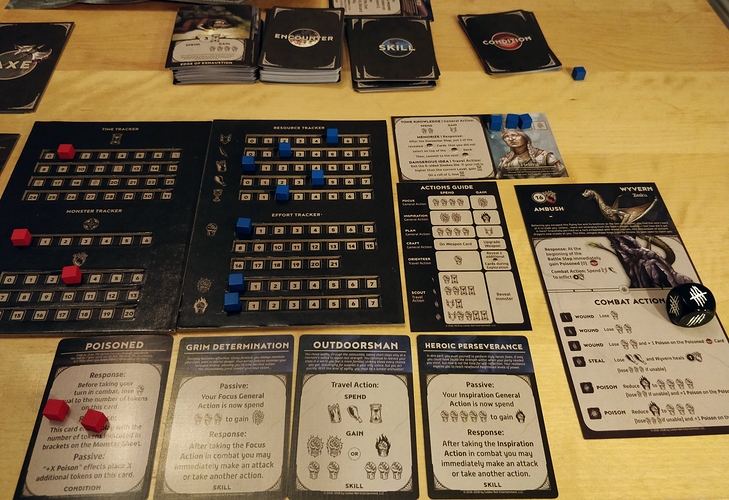 On my next run, my Huntress was good at making sure she was well provisioned with food. But, for 2 levels, she struggled to upgrade her weapon and fought bare handed. By the end of the 3rd level, she was finally wielding a frightful maul when a Minotaur (a creature which painfully counters advanced weapons) cut short her attempt to escape. 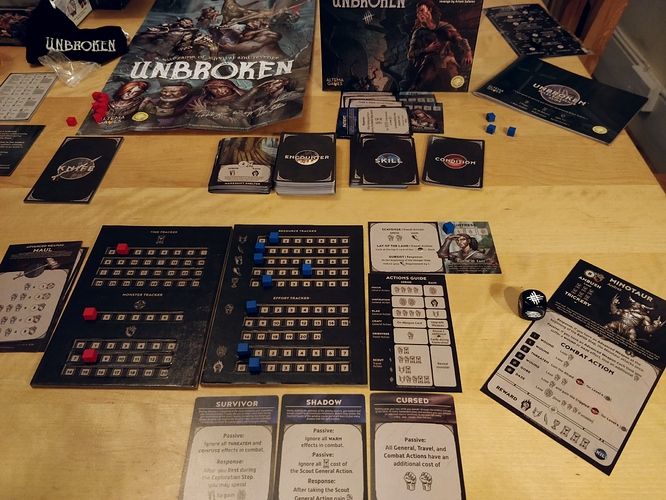 It is a shame that the game is mired in the aftermath of the Kickstarter debacle. It’s been review bombed on BGG. However, the game underneath all that controversy is gritty, easy to bring to the table, looks great and has some clever resource management mechanics with a dollop of luck on top. It plays quickly though. So I don’t see some swinginess as a terrible issue personally. It’s a game that will hit my table again for sure.

Unbroken just felt like rote slider management to me. I never got caught up or even sold on what it was trying to present. It was a thinly veiled exercise in “move this cube two spaces to the left to move that slider one space to the right”. I pretty quickly felt like I’d seen all it was ever going to show me. :(

the game underneath all that controversy is gritty, easy to bring to the table, looks great and has some clever resource management mechanics with a dollop of luck on top.

Yeah, this is my feeling, still pull it out now and then for a quick delve. And also feel its a shame about the review bombing. I met the designer at Pax Unplugged in 2018 and he was a real nice guy and very happy to chat. 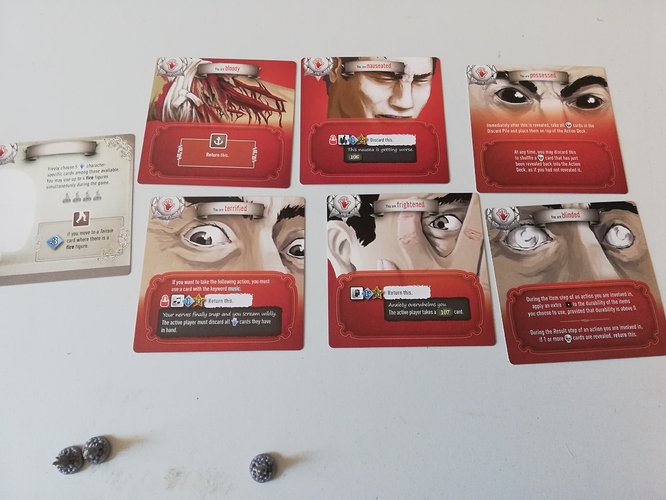 Erm… What game is it?

Seems interesting. But I have no clue.

7th Continent! I am definitely about to die.

Interesting. I’ve only ever seen the box. Didn’t realise it was using that kind of cartoony art.

What did I say? Sundays are for doing in solo games. Hope you go out in a flash of glory.

GMT Games, makers of grognardian games and also Navajo Wars, announced yesterday that it has launched a solo-only studio, called GMT One. The announcement is strangely not on their blog nor on their main page or anywhere on their site but buried in the middle of their latest email newsletter:

Well…bored with all my games…so I just ordered…and to pay my account back with my soon to hopefully be deposited stimulus payment:

I was going to get Fields of Fire again…but I would shoot myself before trying to learn that one.

Hope one of these is somewhat fun and somewhat challenging.

GMT Games, makers of grognardian games and also Navajo Wars, announced yesterday that it has launched a solo-only studio, called GMT One.

You could be right, but that seems a narrow thing do create a separate studio for.

You could be right, but that seems a narrow thing do create a separate studio for.

Was quite interested to see that someone developed a solo variant for 4th Edition BattleCON, a head to head dueling game that I have spent way too much money on and love but almost never have the right player count for (i.e., 2):
https://boardgamegeek.com/thread/2556156/solo-variant-4th-edition

I haven’t tried it to see if I like it yet, having just found out about it, but there’s a (slightly outdated) playthrough video by the guy who came up with it in the thread, and I’m interested to do so. He also came up with one for L99’s other big dueling card game, Exceed (and yes now they have a third one in Sakura Arms, but their version isn’t out yet.) which is here:
https://boardgamegeek.com/thread/2586108/solo-variant-video
I don’t own or play Exceed myself.

In a much lighter vein, today is my birthday. I had the day off and my wife wanted to make sure I had new games I could play solo. So she got me 2 Button Shy wallet games to play today. 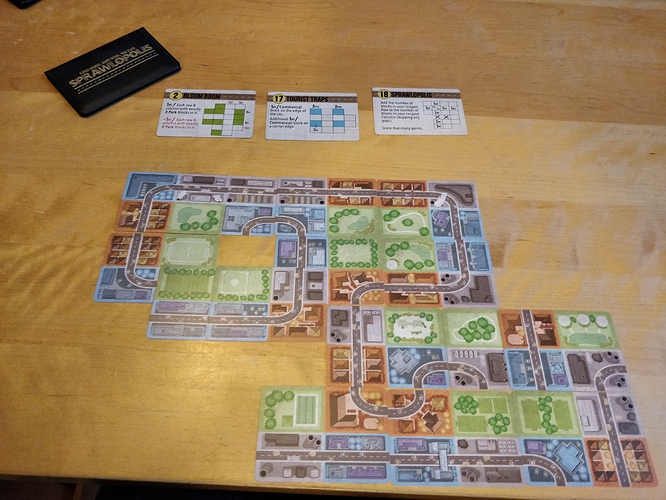 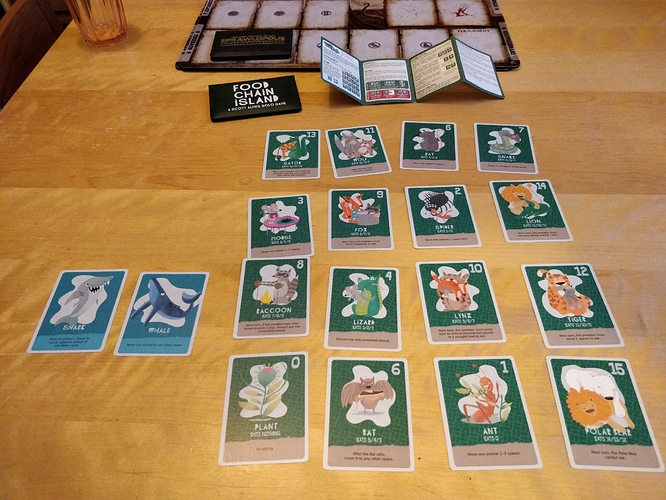 I had heard lots of good things about their wallet games and they deliver. Fit in your pocket. Easy to learn and set up and a very nice way to spend some time solving a puzzle based on 18 cards.

Of the 2, Sprawlopolis has the crunchier puzzle. Every move you make is a compromise that keeps you unsure of whether you will teach the target score.

The base game of Food Chain Island is easier. But it’s so cute and well designed. And it comes with plenty of alternative configurations to make the game more challenging. I’ve enjoyed it a lot too.

If you are interested in their games, Shut Up and Sit Down has a fun review of those and others. 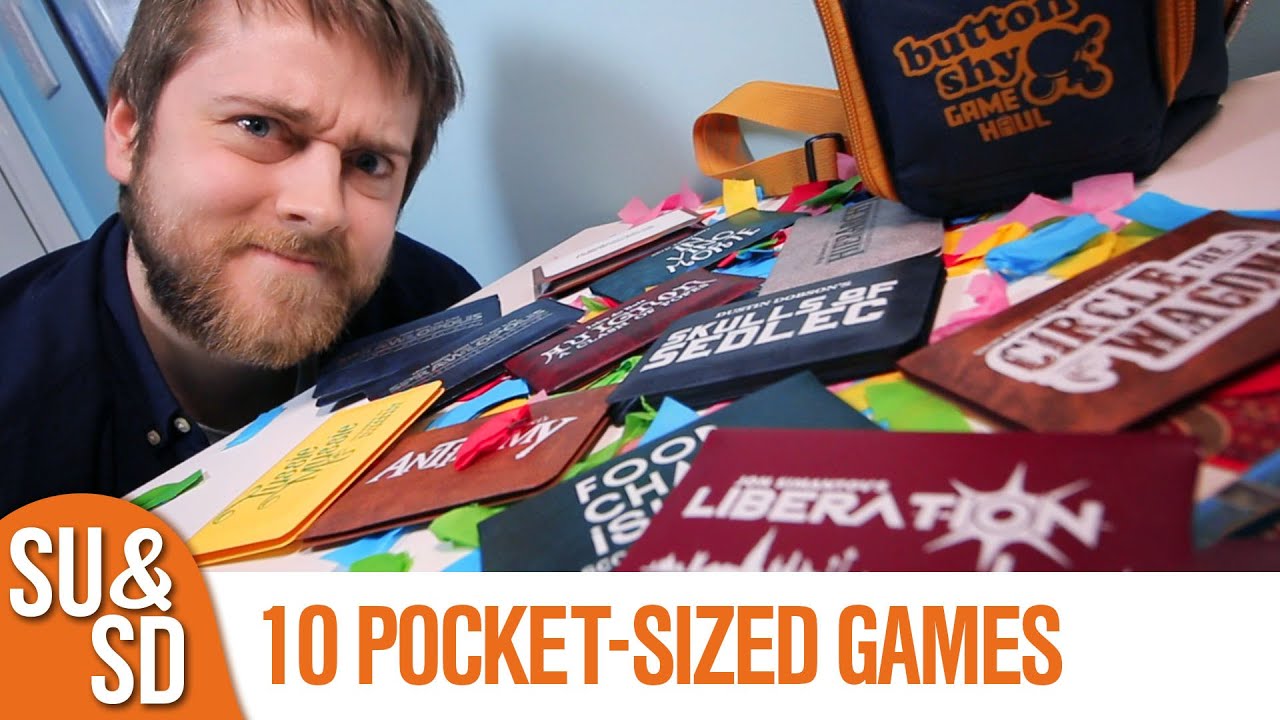 Oh nice, I watched that SUSD and some of them looked really fun, especially Sprawlopolis and its variants.

I like Sprawlopolis. I backed the Agropolis Kickstarter but never actually completed the pledge because I’m not sure I need two opolises, but I’d recommend the one.

I’m curious to try it 2 players but, really, it’s perfect as a neat little 1 player puzzle.

It appears you can combine the games in some fashion if you have both? I wonder what that would do to the puzzle and whether it would be as good as standalone though. The game is so quick and easy to bring to the table as is.

Yes, there is a small expansion called Combopolis that allows you to combine the two.