I went through my first play of Deck Box Dungeons yesterday.

Thank you for the detailed write up (with photos!). I enjoy solo crawlers and had not heard of this one. Exploring the BGG forum for the game, your comments mirror what others are saying; the dev acknowledges that the rule book sucks and promises a rewrite (though obviously one that current owners would need to print).

I am on vacation now and brought along Space Hulk: Death Angel, a solo strategy game, though not a true crawler, and also painfully hard.

My pleasure! Since the game isn’t widely known, I thought it was worth showing what it looks like.

I own Space Hulk: Death Angel too, yet have never played it. Once in a while, I relearn the rules, then get intimidated by the brutal difficulty and play something else instead. I really need to change that some day.

Table space wise, I think Deck Box Dungeons will take the same or even less space than SH:DA and comes in a smaller pack. So not a bad option to take on holiday either.

Once in a while, I relearn the rules, then get intimidated by the brutal difficulty and play something else instead.

That’s kind of why I brought it. I’m determined to keep at it without other games nearby to fall back on. I also brought a printout of a 120 page strategy guide that promises to drastically mitigate your bad luck, but the guide is equally intimidating.

The place we’re staying has Monopoly. That is it. My daughter actually mentioned she might want to play it. I think as a family game for a vacation I might be able to stomach that.

I’ve seen a good offer for Nemo’s War 2nd Edition with all three expansions. I only played the first edition so far. Now my question: I like how fast the first edition plays and I’m a bit afraid that the new edition is way longer and more complicated. Is that correct?

I’ve got second edition with the initial expansion that just added a bunch of upgrades for the Nautilus. I’m waiting for the two new expansions to come my way soon. I never played the first edition. Anyway, the game still seemed to go quick. Draw an event card, roll x dice for number of actions plus populate the seas, and then do said actions. I don’t think the game would play out too long at all.

With the Nautilus upgrade expansion (whatever it was called), I simply shuffled them all in so I’d have a deck of 20 cards to work from. There are other variations. With the other two expansions, from my perspective, it remains to be seen.

Star Trek: Frontiers is on its way, which is a reskinned version of Mage Knight, which I have never played but is #1 on BGG for solo games. 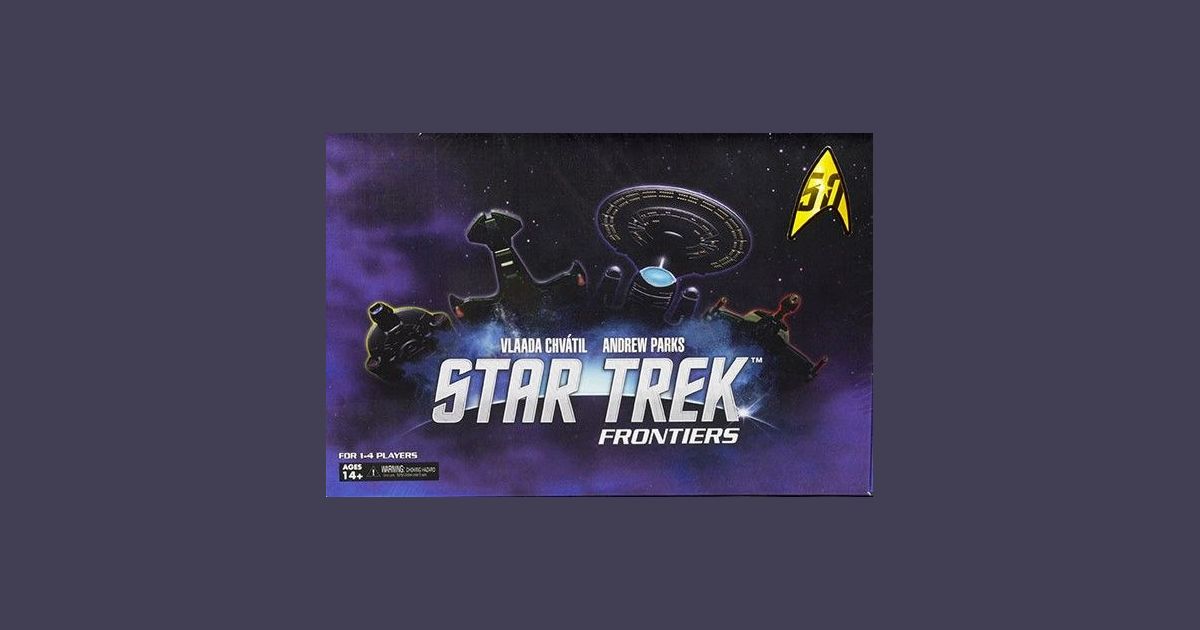 Description from the publisher: A contested region of space accessible through a known wormhole has drawn the attention of powerful forces throughout the galaxy. Both the Federation and the Klingon Empire, who share a delicate alliance at this time,...

Looking forward to trying it out. It will go perfect with my Star Trek whiskey glasses that @SadleyBradley got me for Secret Santa a few years ago.

Deck Box Dungeons continues to kick my behind. I’ve played my 3rd game of the Troll Trial scenario yesterday… and lost for the 3rd time.

Not sure whether I’ve been particularly unlucky (I don’t think so), am really bad at dungeon crawlers (I hope not, but I can see I am getting better at this one every run) or just choose my heroes, classes and gear poorly. Still, it is now: The Game 3 - Wendelius 0.

I personally do not mind, but it might frustrate some.

That said, there have been good times. Sometimes, you spawn a room full of somewhat scary Ravagers and Talons and remember you purchased a Fireball Scroll. :) 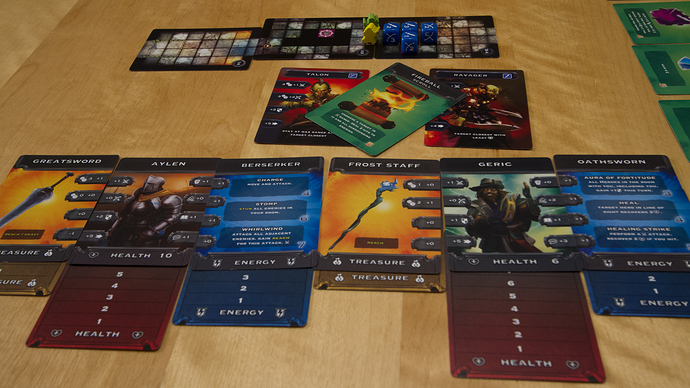 The fact that the game generates different dungeons every run (with broadly the same rooms, but in a different configuration and represented by different tiles) and spawn different monster groups (within the parameters of each room in the quest template) keeps things fresh.

Dead in run 2, after having to reach a nasty group of monsters through a trap ridden room: 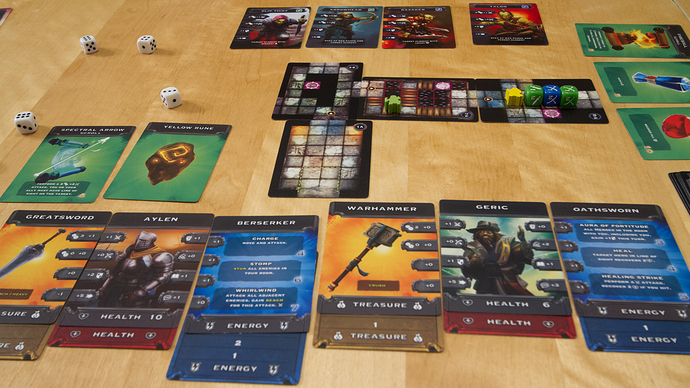 Dead in run 3, after meeting the boss and bringing it down to 1HP. Maybe next time… 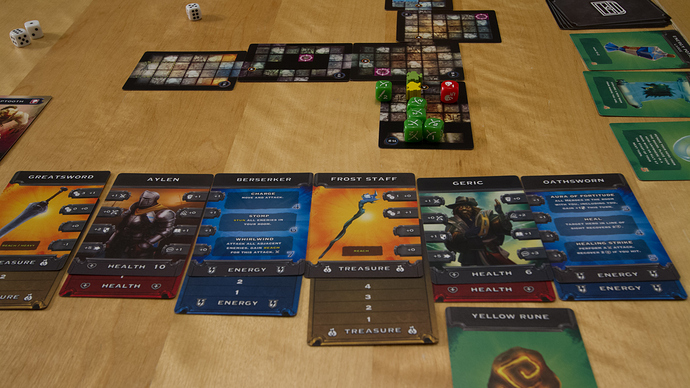 So in I go feeling very smug with my fireman and a mechanic. The latter wandering the map with a freaking automated turret. What could possibly go wrong? 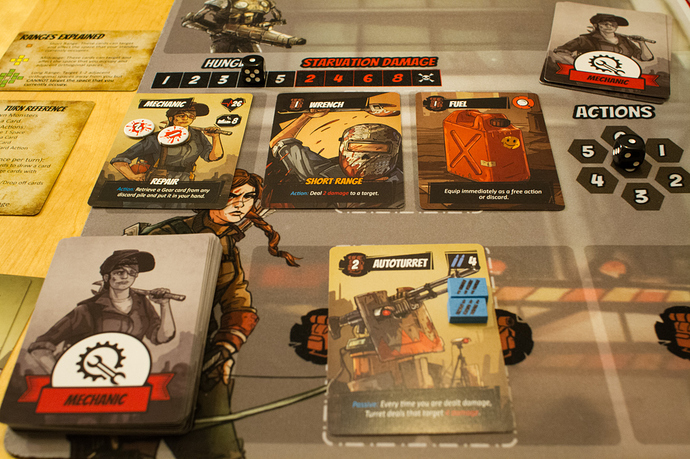 “Let me show you”, says the game with a smile. How about I make sure that all the locations near your van are either hard to pass, painful or attract monsters?

And then, let me make sure no food is to be found nearby. 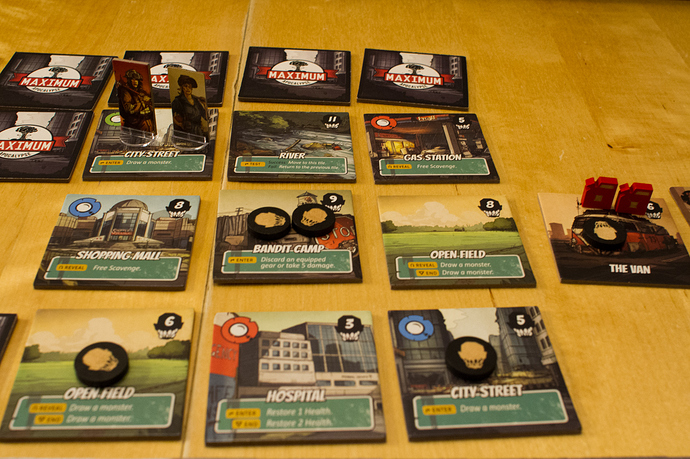 As the panic sets in and you explore more and more of the map to find any food, the monsters start piling up.

“What good is a turret if you can’t heal yourself?”, asks the game with a curious and now slightly grating smile. 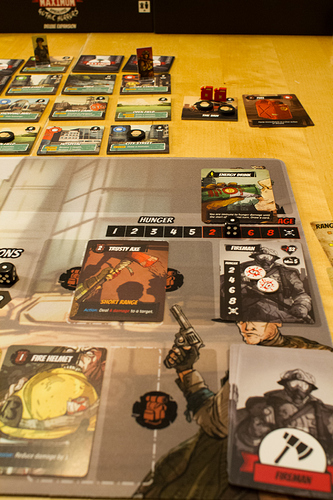 And so it ends, with about a thousand dead zombies and all the fuel my heroes could need. But their hunger and wounds killed them in sight of the van they were futilely trying to get back to. 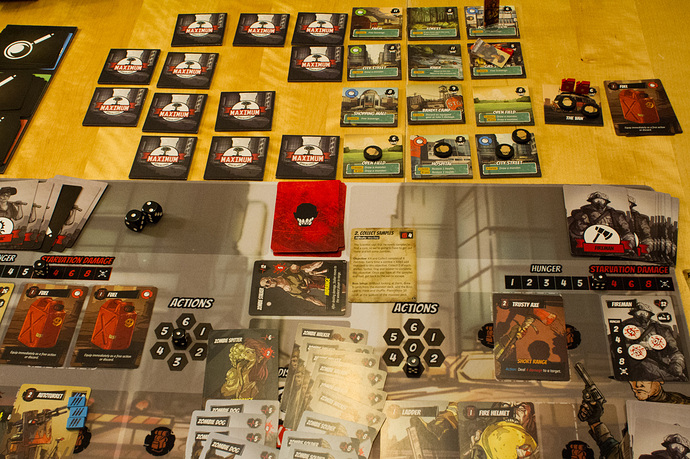 And that’s what can go wrong.

But if you’re looking for a solitaire friendly LCG (Living Card Game), BigWeather, I heartily recommend both Sentinels of the Multiverse (SOTM) and Pathfinder §. I’ve gotten a lot of great solitaire play from both, and they each tap into the appeal of a living card game in unique ways.

I’m completely new to LCGs and looking to get into something. Any recommendations? I’m interested in solo or co-op style games rather than anything competitive. I have taken a look at the GoT game or LOTR games on Amazon but I’m wondering if those would be too difficult for a noob?

The GoT game is competitive (it’s a good game, though, if you’re in the mood for duelling).

The LOTR game is definitely not hard to play. Tuning up decks can get complicated, but it’s also totally optional.

EDIT: also, don’t forget to take a look at the Arkham Horror LCG. It’s a bit less complicated even than LOTR and it’s a lot less deckbuild-dependent. You can be successful with virtually any party make-up, though obviously some are easier than others.

Try the latest Pathfinder Adventure Card Game, Those aren’t terribly difficult to grasp, definitely cooperative, and you each build up your character through the campaign. We played through the first one but I know they’ve improved quite a bit from that first iteration (the same one available on Steam/ios/android).

I’m with @rowe33 in terms of recommending the latest Pathfinder game. It’s been nicely polished and tidied up over several iterations, and it’s got plenty of content up front for actual deck-building, as opposed to the stuff Fantasy Flight publishes where you have to buy in pretty deep before you’re getting any meaningful deck-building. Which is arguably the whole point of an LCG.

(In fact, Canuck, the publisher sent me an extra copy of the Pathfinder re-release and its first add-on adventure. If you want it, it’s yours if you pay for shipping. PM me your address.)

But @charmtrap is right that the Arkham Horror LCG is pretty forgiving when you first start playing. It’s only later that you get a lot of options and challenges in terms of building decks.

I’m with @rowe33 in terms of recommending the latest Pathfinder game.

Yeah, I’m told people like that game. I found it incredibly dull and repetitive , but apparently there must be some attraction.

I haven’t played the latest set but I personally would recommend considering Apocrypha over Pathfinder. Similar DNA (and same team) but so far I feel like Apocrypha has a little more room to play with the design space. I’m more into urban fantasy than Pathfinder, to be fair.

I’m with @rowe33 in terms of recommending the latest Pathfinder game.

Yeah, I’m told people like that game. I found it incredibly dull and repetitive , but apparently there must be some attraction.

I could understand that complaint if you played the base set. As it progressed, it got more varied with the scenario setups, objectives, and tweaks. That’s one of Apocrypha’s strengths, by the way. It has no set structure, so any given scenario can go any number of ways, and it’s not hemmed in by the usual “some elfs gonna fight some goblins” dross. But the advantage of the latest Pathfinder reboot – which is definitely more “some elfs gonna fight some goblins” – is that they’re introducing this kind of flexibility and variety to their fantasy setting from the very beginning. Which means they’ve got even more wiggle room to do different kinds of stuff in their later sets. I’m excited to see where it goes.

Yeah, Rise of the Runelords is more proof of concept than anything else these days. They got a lot more creative and challenging in later sets, reduced the degree to which combat dominates everything, and made characters more flexible (while commensurately increasing the spread of skills they’ll need to test against).

Tom, that’s an incredibly generous offer, thank you. I will check out some videos tonight to see that it floats my boat and then send you a PM.

(In fact, Canuck, the publisher sent me an extra copy of the Pathfinder re-release and its first add-on adventure. If you want it, it’s yours if you pay for shipping. PM me your address.)

After a week-long shipping odyssey, I finally got the three Nemo’s War expansions, as well as the new box they were offering including a new insert.

Man. The new box is just sexy. The artwork really pops, and the insert has space for all cards from the expansions (even sleeved) and counters. Now I just need to find time to play!

After seeing a few pics of Maximum Apoocalypse I decided to give it a go. Zombie “Save the Scientist” to start. 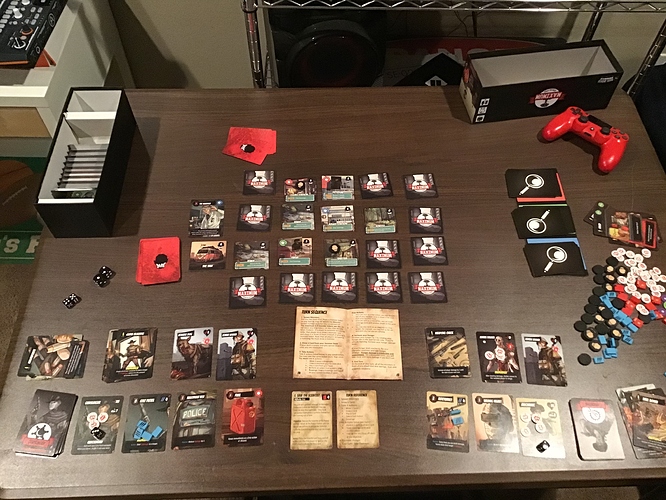 Got the scientist back to the van no problem but have only found 1 fuel can and have about half my cards left for each player.

Really enjoying this one so far…like that you go through your deck once and you really have to think about when to play or discard the cards depending on how far into the game you are. I also made a rule that I guess is in an expansion where you can only scavenge once per tile per turn which makes it harder to get the damn fuel!

More fun than I thought up to now…and my kid mentioned some interest so anything to get him off the TV for a change!

I can’t be the only one wondering why you have an apple red PS4 controller on the table.