John Carpenter is one of this directors, created some great classics, but very uneven in the quality of his films. I really, really love The Thing since I bought a bootleg VHS copy in the schoolyard from the bully of my class. But I really struggle with some of his other movies. They are often low budget, they don’t have a great script or great camera or editing. Or have they?

Let’s revisit and check it out.

I watched yesterday, The Prince of Darkness. Eh, it was okay, but really nothing special. There was guy who looked like Alice Cooper (probably it was him), not bad. And some other scenes had a strange mood, like the dead black guy, who was laughing and laughing, and his look on the face.

I liked the dreams from the future most, they gave the whole thing a twist, like something really important was going on. And then it was over, huh, I was waiting for more to happen with this future stuff …

Overall it felt really low budget, some dialog felt really stiff, I don’t think there was any art in the camera or editing. Just a basic B-Movie type of horror film. The synth music (by Carpenter) was good, I have a weak spot for 80s synth. Maybe the most artful thing in the movie …

I think, the siege thematic is somewhat of an obession of Carpenter? There are similar scenes in They Live, Assault, Thing and others, a horror trope he likes to use.

Anyone liked Prince of Darkness?

Just waiting for when you get to Vampires.

There was guy who looked like Alice Cooper (probably it was him), not bad.

Is he that unveven, rather than being consistently good, then dropping in the 90s?

I’d say basically everything from Dark Star through to They Live that I’ve seen is good to great, but I haven’t seen Starman or Prince of Darkness. Everything after that is pretty dicey, though I actually liked Vampires in a campy fun way, which I might not be able to now given what we know about Woods.

hm, I wouldn’t call Prince of Darkness good, it was okay for some small scenes, but mostly meh. I haven’t seen Starman, yet. I want to check out how his films hold up (for me, at least). And especially some of the good ones. Are they still good?

Are they still good?

Very much so. Extremely of their time, however. I’d say Dark Star, Assault on Precinct 13, The Thing, Escape From New York and Big Trouble In Little China are all-time classics. Halloween arguably too if you’re into slasher movies, but it’s not a genre that really does much for me.

I should watch all these movies. I’ve only seen Escape from New York (loved it) and Escape from LA (hated it). 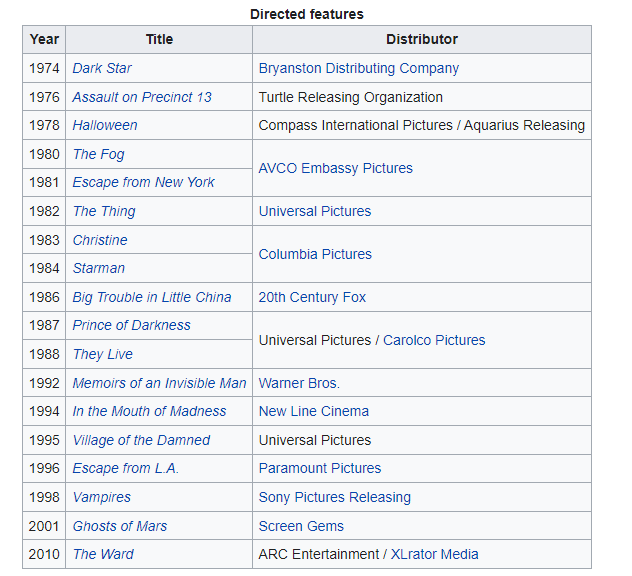 Oh yeah, and Big Trouble in Little China, I saw that recently, I wasn’t sure what to think of it. I’m still not convinced it was meant to be satire. But if it really was, then it was kind of brilliant.

you haven’t seen The Thing? You should start there … it just feels right. I even read the novelization. I rewatch it every couple of years… Hm, was Alien or The Thing first? They share some similarities …

On the other hand, looks like Dark Star is on Kanopy, and Assault on Precinct 13 is on HBO Max. I should start there.

The important ones have been mentioned: The Thing, Escape from New York, and Big Trouble. Starman and They Live are for me his next tier and I conveniently ignore the rest. I didn’t even know about The Ward.

I’m still not convinced it was meant to be satire

You have Kurt Russell channeling John Wayne as Jack Burton, who believes he is more competent than he actually is and all the heavy lifting is done by his sidekick.

I would call it good. I don’t know whether or not it’s good by criteria like acting or editing or the like (It has been some years since I watched it), but throughout the movie there is a choking, nihilistic atmosphere that still sticks with me. Plus Alice Cooper dissolving into bugs. Ugh. A better movie than Halloween, even if it’s less influential or iconic.

Hm, was Alien or The Thing first? They share some similarities …

Alien was first, and you can clearly see its roots in Dark Star. Harder to link Dark Star and The Thing, but it is the same director, so maybe there’s something there.

Oh yeah, and Big Trouble in Little China, I saw that recently, I wasn’t sure what to think of it. I’m still not convinced it was meant to be satire. But if it really was, then it was kind of brilliant.

I don’t think Big Trouble was meant to be satire in the sense of being a big joke that’s just pointing at something and laughing. It doesn’t take itself seriously, but it is sincere, which is what makes it brilliant. Like Escape From New York, as opposed to Escape From L.A.

Alien was first, and you can clearly see its roots in Dark Star. Harder to link Dark Star and The Thing, but it is the same director, so maybe there’s something there.

Dan O’Bannon wrote Alien and Dark Star, so the there you have it…

I personally would call him always a bit uneven - The Thing is an all-time classic, Escape from New York and Big Trouble pretty top tier as well. I also really enjoy Prince of Darkness and in the Mouth of Madness but wouldn’t rate them as highly. And then things like The Fog and Escape from LA I still liked but aren’t exactly must-sees. And personally, I think Halloween and Assault on Precinct 13 were probably great in their time but don’t hold up today. (I have not seen Dark Star, Christine, They Live, Starman (I don’t think), or most of his other 90s-onwards movies.)

Yep, and he took the goofy beach-ball alien sequence from his student film and turned into entire terrifying horror movie.

When was the last time? I am also not a big horror movie guy, so this might influence my opinion on some of his movies. The Thing is a horror movie, but also SciFi…
Prince of Darkness, it started as a discussion between science and the occult, but it never went anywhere. The main protagonists were all scientists. And the prof also talked about quantum mechanics etc… but it was never really merged with the occult stuff. The occult was relegated to the bible, church themes. Well, they stated that evil is real, a real substance, maybe that’s the science part.

The best attribute I use when I really like something is elegant. The Thing was elegant, no fat. Nothing to add or to remove. Prince of Darkness was anything else but elegant.

I just enjoy it because it’s got a bunch of creepy imagery in it. I agree it’s not super coherent, which is one reason I don’t rate it as highly as stuff like The Thing. Discounting Halloween, which is a different sort of horror movie entirely, I think for me it goes The Thing >>>>>>>>>>>>>>>>> In the Mouth of Madness (which has more of an overall arc) >>> Prince of Darkness >>>>> The Fog (which just isn’t really very memorable).

I consider the Carpenter/Russell trifecta of The Thing, Escape from New York and Big Trouble in Little China to be three of my favorite movies of all time.

I pretty much disregard any movie he made past the 80s though. There are some decent later movies like In the Mouth of Madness but then you get to stuff like Vampires and Ghosts of Mars and it’s just yeeeeeesh.

And yeah, I like Prince of Darkness but mainly for its mood. I like it’s take on the biblical concept of good and evil in the modern age.

I do like Vampires a lot. It’s sort of a cult classic over here.

Dan O’Bannon wrote Alien and Dark Star, so the there you have it…

He also was Pinback in Dark Star.