Both players enter orders, and then they’re executed simultaneously. I remembering hearing the term used way back when for Combat Mission.

Combat Mission: Beyond Overlord going back to 2000 is where I first encountered WEGO

And at least as it was implemented in that series it’s really rather brilliant. Each side issues the next minute of battle orders on both sides and then the replay shows that minute of battle play out to see what happened.

Used in playing against a human opponent via PBEM I found plotting your turn, exchanging turns and then seeing the outcome play out was unrivaled tension as you watched it unfold.

It’s a way to mix turn-based gameplay with simultaneous actions, instead of “taking turns” (which, in comparison, is called IGOUGO). Combat Mission pretty much pioneered it, but there are other examples - most AGEOD games, Flotilla, Frozen Synapse, to name the most important ones.

Battlestar Galactica Deadlock is WEGO as well, pretty much.

Oh yeah, it is and it’s awesome.

If nobody minds, here’s our review of the game:

For those who have been living in a cave (with or without a box of scraps), John Wick is the protagonist of a trio of films, soon to be a quartet, focused on an assassin who has worked very hard to get out of the business and the complicated...

Although there are loads more out there amongst the bigger sites if you haven’t seen them already.

Can you comment on the remarks above about the game getting stale?

Not personally no - wasn’t me who wrote the article. I can ask if you like.

I’m having an existential crises and I think this might actually be a real-time strategy game.

The replays are just comically bad. I don’t know that there is anything they could have done to make them look less like a John Wick combat scene. The ludicrous walking on a hex grid and the stilted combat animations that have no weight at all pretty much make sure nothing you do actually looks cool.

I also got bored with the gameplay faster than the game could introduce new concepts.

On more important ontological matters, I don’t think this is a WEGO system. In WEGO all players plot their moves simultaneously, and then both sets of moves are executed. Once all moves have been executed, the players enter new sets of moves. This is different; each unit takes an action that takes a certain amount of time. As soon as an unit action finishes, they start a new action without waiting for other units to finish whatever they’re up to. And when selecting a move, you see what actions the other units have started but not yet finished.

The last thing about seeing the in-flight actions is the novel part. Otherwise this is just like a typical energy based roguelike combat system.

Loved the idea behind this sort of timeline based tactical combat for a long time, so was happy to see this arrive.

Man though, this doesn’t hold a candle to Metal Gear Acid!!

Never mind the visual glitches and the slightly odd spawning and replay camera, can live with those, the core gameplay is just missing that ability to feel like i’m the super soldier and actually in charge of the situation…

Not made it to first boss yet, and not sure i want to sadly…

Welcome @Shards! Appreciate the input. That’s disappointing. Don’t know if you saw it, but I had mentioned MGA earlier in the thread. Sounds like your experience echoes others here though. What a shame.

I’m terrible at stealth. When I did play acid, I always wound up in big shootouts 😳

You jerks stop making me pine for Metal Gear Acid. In hindsight, that seems like the kind of game to make a fella keep a PSP around.

Wouldn’t Switch be perfect for a new Acid game?

I still have my psp, and the game that see it dusted off is almost always MGA2!

(2 is just so much better than 1 imho, the story is still utter nonsense, but the gameplay and visual aesthetic is fantastic)

Back on topic, I’ve advanced a bit further through the first act of hex now. But I’m still really struggling to understand how to like it… I’m really glad it exists and that it’s done well with the critics, but as a strategy and tactics player, it just doesn’t feel “good”

The game is OK, but even on mere HD resolutions this thing makes my GPU fan spin up to maximum, which is sort of enough to make me say “maybe I’ll play a better game that doesn’t do that.” 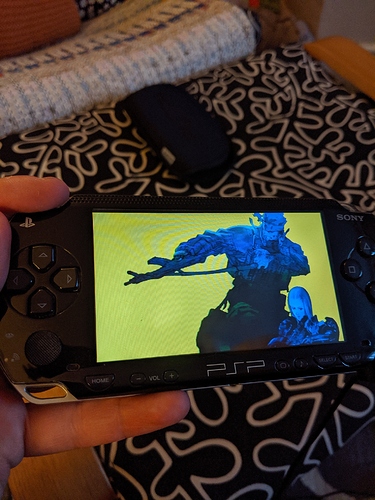 On the last mission, i had a hard time getting into it at first, but by the third map series i started to get it, and really started feeling like John Wick.

The game inherently appeals to me though, as its like a turned based Max Payne…so hard not to like in that context…

Finally got round to giving this a go and I lasted about 4 missions or 4-5 hours before uninstalling. Thoroughly disappointing. I like the presentation and concept (choreographing Wick’s violence by the second, kind of like Toribash or Frozen Synapse), but the execution is all over the place.

The hex grid makes movement look unnatural with lots of awkward zig-zagging. The replay feature (which is a perfect fit for this idea and license) draws attention to how daft the hex movement is as well as the rough (or total lack of) animation/action interpolation–this license needs fluidity. Not being able to move around crouched without rolling several hexes is a pain in the arse. Having to spam the wait button until a brawler gets within takedown distance is silly. The AI is as dumb as a bag of rocks. And the moments when the game decides to dump numerous enemies on you from all angles when you were kicking butt moments before rarely made for an enjoyable (or fair!) bind to work your way out of.

I really wanted to like this for being a turn-based tactical take on a fitting license but the whole thing just feels messy and repetitive unfortunately. You get the occasional glimpse, the odd flash, of what the game was aiming for and that really stings between all the frustration.