Jumanji: Welcome to the Jungle - The Rock and no magical boardgame 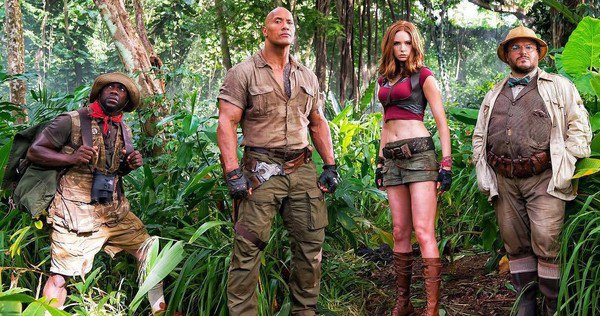 Kids get sucked into a videogame and turned into their in-game avatars. Hopefully, it’s like more like Far Cry 2 and not Far Cry 3.

My god, I love that cast. I just saw the first movie for the first time not too long ago, still holds up fairly well. Except for the monkeys.

So I didn’t realize that Karen Gillan was going to be in this. That, alongside The Rock, considerably increase my interest in this.

Wow the image is perfect, it looks exactly like a videogame. That was my reaction before even reading your text.

I can’t wait to watch The Rock search around for briefcases in the jungle for 2 and a half hours with his trusty GPS device.

Wait, so all these actors play children in the bodies of video game characters? Most likely this will be awful, but if done just right it could be immensely entertaining.

If it’s like real video games, then the one playing Karen Gillan is a dude.

If it’s like real video games, then the one playing Karen Gillan is a dude.

Yep, that would be me. She’d look a bit more like Sarah Palin, though.

This looks pretty fun, I have to say. New trailer today.

That looks SO fun.

I’m actually kind of shocked at how much fun that looks to be. Really thought this was going to be awful (in the this did not need a remake way) but the casting seems perfect.

Wow. This is not terrible. Jack Black may actually be decent in it.

I think I’m gonna watch this one after Christmas. I don’t have any particular nostalgic feelings for the original Jumanji movie, but the trailers for the new one always seemed like stupid fun. And so I might be just in the same camp as Mark Kermode.

This could only ever be utterly brilliant or unwatchable.

Watched it today, and I thought it was good. Better than the original.

My. God. That was so much fun. We laughed the whole time. Jack Black needs an Oscar for this.

Yeah, we just got back from seeing this, the entire family had a great time. Jack Black was the best part of it, I think. Guy is a national treasure. I do love Kevin Hart as well, I’ve been watching a lot of Real Husbands of Hollywood lately.

The family saw this last night. It’s fun and has some good messages and I think I might have got some sand in my eye at the end. I think all the actors and actresses did a good job. I was a bit let down on the “this is a game, I know how to play games” - it was rudimentary at best.

But they did use 3 lives in creative ways to game the game.

My only fault lies with the time travel paradox at the end.

If Alex returns to his house as if nothing happened, then how does game get donated to the school?

Saw this for the second time yesterday, just as fun as the first, if not moreso.

Watched this today and ended up liking it even more than I expected. I went in guessing that the trailer had featured most of the punchlines, and that turned out to be incorrect. Moments like Shelly-Beth trying to take a leak or teaching Ruby-Martha how to flirt had us in stitches. Jack Black can be hit’n miss, but here he was really fun to watch in action, same for Karen Gillan and the ever-likeable Dwayne “I’m a nerd!” Johnson. Kevin Hart with his usual shouty shtick was the weakest of the bunch, but it didn’t harm the overall experience. The villain was a bit of a letdown, but the movie technically being set in a 90s videogame certainly makes for a conveniant excuse.

Saw it and loved it. It was just refreshingly light and funny and probably made me cry a few times because I couldn’t stop laughing. My 9 year old nephew was pretty well entertained. Some of Jack Blacks jokes went way over his head which was… fine. I think it was mostly those jokes and maybe the… mild violence that made it PG13. It really was enjoyable for the whole family… oh and completely packed, full theater.