Or you really, really like looking at Dinosaurs. The models are excellent, but the game / simulation, including the Dinosaurs, meh.

Yeah, I think Zoo Tycoon, even with the same limitations, would be more my speed.

Me too. I am not going to be turned off from Planet Zoo due to this game, and I loved Zoo Tycoon 1 years ago. I’ll just let them bake that one a bit more and start churning out their endless DLC. The weird thing is, which I think @jpinard mentioned earlier is this game looks… gorgeous. I mean it really is stunning the kind of detail they put into those models so how come Planet Zoo which doesn’t have the license cost… looks so simple and inferior after they did this game?

I sunk in about 90 minutes before I had enough. It’s a strange game that seems to be missing something that would make it fun for me. Dino’s sure are nice to look at. And Frontier knows how to make games that run well for me on my PC, but they aren’t very fun. And I seem to be bad at making my own fun in their games. I might revisit it next year if I get the itch to revisit was I experienced. Until then I asked Steam for a refund. :P 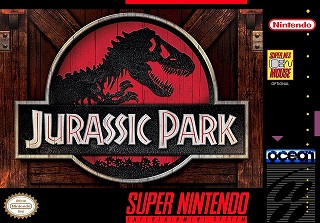 It sort of feels to me that JPE is sort of a game where you plop down buildings and play with dinos - with perhaps a sort of quest/puzzle aspect - whereas Planet Zoo is a game where you really control every single little aspect of creating and maintaining a zoo.

mean it really is stunning the kind of detail they put into those models so how come Planet Zoo which doesn’t have the license cost… looks so simple and inferior after they did this game?

Not to derail but what do you think looks inferior in Planet Zoo? I’ve seen plenty of people playing who have zoomed into the models used for the animals (which I assume you’re referring to) and they look great! They move realistically, the textures look fine, I don’t see any issues.

I will grant you that maybe the dinos look a touch better but perhaps part of that is because we can’t compare them to their contemporary counterparts. 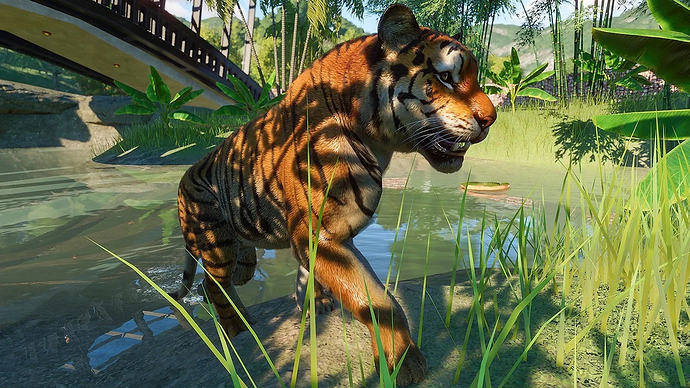 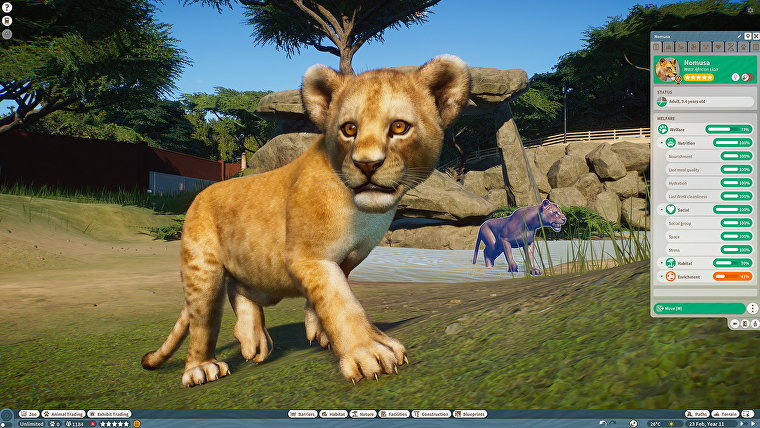 It just looks so much more inferior to this: 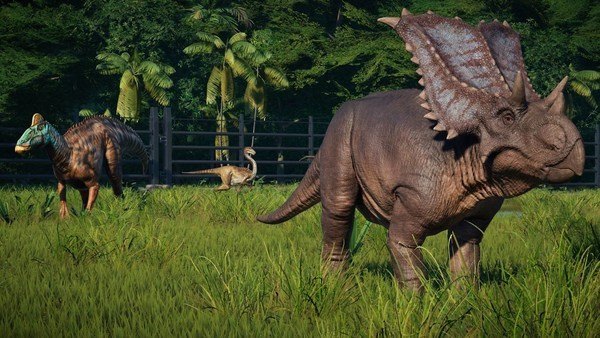 The details just look different to me.

Now I haven’t played Planet Zoo so it could be the screenshots are not doing it justice, but I have now played JWE, and the textures, even the rolls of skin on the body are there.

We discussed this very thing on the podcast. For me, it’s the fur tech they use in Zoo. I just don’t think it looks good up close. The dinos in JW don’t have that issue for obvious reasons.

Yeah. That’s probably a lot of it. It’s like it’s painted on or something. There is no muscle texture or skin rolls. I mean those big cats, like domestic cats, they have like masses of hanging skin that kind of sways when they move and stuff. I didn’t expect that sort of thing from like Zoo Tycoon decades ago but today… we have these animals to see and review right now. They can do so much better, and we know they can because they put so much time and effort into the dinosaurs. I mean it’s not just color like hard bone and beak and claws… heck even the claws look better than on those cats.

I mean half that game looks just like Planet Coaster, had the same bugs form what I’ve seen… they should have put more into those animals.

The dinos in JW don’t have that issue for obvious reasons.

I wonder if it would be a bigger problem if the dinos were properly feathered.

I wrote earlier in this thread that JWE is perfect for when you’ve called in sick with the flu and you want something simple and mindless to play while your head is in a fog. I put that theory to the test this past week and have to say I’m really enjoying this game! I finished the base game after about 40 hours. I haven’t played the Dr Wu or Claire stuff yet. I definitely plan to pick up the new expansion.

The parts of this game I like are the division missions. Once you’ve completed a certain percentage of Contracts for a particular division (science, entertainment, security), you’re given a mission. A mission is a set of more elaborate tasks. You might be required to release a few herbivores in the same enclosure as carnivores, and try to keep them happy for five minutes (good luck!). After completion, you unlock a new building, research item, or other goodies.

My favorite attraction is the Gryosphere. You can ride in them first-person, and the fighting dino’s can actually bump into you and knock you off the track momentarily. A soothing female voice is your tour guide. You can even set up your ride to visit more than one enclosure. It’s a well done part of the game.

I went ahead and re-watched the Jurassic movies as well. I’m really into this stuff now, no turning back. :)

This probably says more about where I’m at than the game, but even in the first hour I started to feel frazzled. Refunded.

I almost refunded it, especially when I realized visitors will go to the observatories that have literally nothing in it if you just build it. I mean they’re standing there look at nothing… but revealing the new dinos are somewhat worthwhile and

And I just want something almost mindless but not quite actually mindless, this kind of works. I mean I haven’t got to the big ones yet, and I kind of want to.

Yes! I was trying to place what exactly looked off. Because by rights, when you look close, the fur detail is actually quite impressive and powerful.

It is their bodies are too ‘full’ and ‘stiff’, like a high quality stuffed animal. There is none of the skin and rolls found in real animals.

I wonder, how do the elephants look, or the rhinoceros? Those might be a closer 1:1 comp as they lack the fur. I wonder if it is the shaders they use for converting the models and giving them texture might work better on hide than on fur.

I’m really enjoying this on Gamepass. You just get the basic version, but my young kids and I like to name and create the Dino’s. The simulation aspects are just barely deep enough to keep me engaged.

Still trying to figure out what dino combinations work together… Because my meat eaters devour the veg-heads… But they also fight and kill one another.

How much depth does the DLC add?

Claire’s Sanctuary adds a nice amount, and Dr. Wu is just plain awesome since you get hybrids.

There’s a big sale on this right now, on Steam, and my kids are loving Planet Zoo so much that I am going to pick it up with all DLC. I’m a sucker.

Any essential DLCs? You mentioned Claire’s Sanctuary and Dr Wu before.

I think someone said all them at one point. :)