Just when you though it was safe to ignore collectible card games, Mythgard shows up [review] 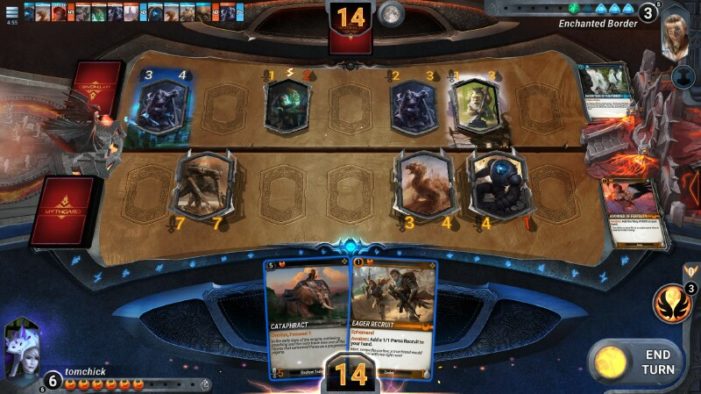 I was done. I was finished with head-to-head card battling. So little has changed since Richard Garfield invented it with Magic: The Gathering back in 1973 or thereabouts..

That was quite the review! Never heard of this one.

The power thing sounds pretty much identical to Hex’s charge powers. And the paths sound a bit like what Hex did with champions, especially mercenary champions, in singleplayer, though there wasn’t anything that fancy in head-to-head play. But maybe I’ll check out Mythgard once Hex dies in a couple days here. I doubt I’ll love it anywhere near as much, but my loving Hex didn’t save it. sigh

Is there any way to enlarge the screenshots you’ve taken for this @tomchick? They’re a bit small, even if I drag into a new tab.

Played a bit. Looks enjoyable. Wish the cards were as large as in Elemental. Bad eyes.

Huh, hadn’t heard of this one, but am definitely going to take a look. I also loved Hex, and am glad to see some of its ideas live on.

@tomchick Fix: The paragraph ending with “For instance, let me show you a card called Unforgivable Crossing:” looks to be out of order, and should be above the picture and other paragraph.

Peer pressure a friend into joining you.

Time for a Qt3 league?

No human opponents for me until I figure things out.

FYI, if you are like me and decided to give this a shot, if you use the promo code “WelcomeChallenger” in the in game store, it will give you 20 packs of cards to get started.

I try all the card games, eventually, though I usually just end up back playing Magic. This review has me intrigued enough to give it a try. (It doesn’t hurt that Magic is going on 4 months between sets, and I’m pretty bored with the small number of cards out right now.)

It’s a fantastic review, but probably won’t overcome my personal inertia to play another game like this. But Tom gave it a strong, powerful effort, to be sure.

Where do you type it?

My usual problems are 1) the “generous” F2P model (people claimed Hearthstone was generous, for example) turns out to be actually very limiting with the possible exception of if you’re spending 60+ hours a week playing (I might hit 6). Or there’s a flood of freebies to start and then it rapidly dries up, especially if you’re not into PvP (Eternal, say). 2) heavy, heavy PvP focus such that singleplayer content is usually perfunctory, often doesn’t feed into F2P rewards, and sometimes costs amounts of money that’s way out of keeping with the actual entertainment value thereof (Hearthstone Adventures, for example).

Hex of course had next to no F2P model (and I didn’t care because I had already bought in and was perfectly fine with spending money on a game I loved), but it had the best singleplayer content in the business (even if they didn’t focus on it the way they arguably should have) and didn’t charge for any of it (which they probably should have). I’ll be interested to see if Mythgard hits either of those pitfalls for me.

Where do you type it?

There is an option to enter a code in the store, but it you are playing on iOS it doesn’t appear
due to apple restrictions. I had to use the web version of the game to enter the code.

After reading the review, I was gonna hop on Discord and message you. :D

Had to dig deeper. Thanks for the code!

Is there any way to enlarge the screenshots you’ve taken for this @tomchick? They’re a bit small, even if I drag into a new tab.

I’ve actually been shrinking screenshots down instead of embedding larger images and letting WordPress resize them. My thinking was to keep loading to a minimum, but these days that’s probably not an issue. So, sadly, no way to enlarge the images, but I can change that going forward.

Fix: The paragraph ending with “For instance, let me show you a card called Unforgivable Crossing:” looks to be out of order, and should be above the picture and other paragraph.

You win today’s @Mercanis award! Seriously, I love when people point out this stuff.

Time for a Qt3 league?

For what it’s worth, I will gladly play with any of you guys. I promise I don’t have a Grandma Meng’s Tea House in my deck. Yet. But I do have something worse. Are you ready for the Morbid Centrifuge? It’s soooo evil.