Just when you though it was safe to ignore collectible card games, Mythgard shows up [review]

They seem to be a natural synergy to the Norse Valkyrie biker chicks faction only not become of them, but because of the more primal wild nature side of the faction with wolves and shit that also have the canine type in Blue.

Hmmmm. The art is no doubt great. I’m not really digging the pacing though. You’re severely clogged for mana early on, like most CCGs. But then you’re further constrained by gem colors. There is a very brief window around 3-4 mana where you have options. After that, you start running short of cards and you’re back to being constrained. Just that very brief 3-4 window where you have a balance of available mana and cards. Maybe it’s just the story mode decks you get stuck with, because they sure seem like they suck (heal 7 minion health when 95% of them have 5 or under?). I’m also not seeing any boost given to the 2nd player, or else they’re hiding it very well.

The lane system and story reminds me a lot of System Crash. It was an obscure cyberpunk CCG game on steam that tried its hand at lanes (though a lot more restricted than Mythgard). The story mode was a full length campaign following a typical Shadowrun plot, much more than Myth’s tutorial. The one fatal flaw in the game was the “rush/charge” ability was ludicrously overpowered.

It’s worth a look though at only $3.75 right now. Especially if you’re only interesting in single player content.

I was into Shadowverse for a while. The art was also good if you didn’t mind the fanservice. The flair and polish was on the level of Hearthstone. The ability to flip most cards to an alternate powered up side put a new spin on everything. Unfortunately it also followed Hearthstone’s business model of power creep with every new expansion. Forced to purchase the new stuff to stay competitive, made obsolete by the next expansion by the time you could grind anything out with the f2p route.

I’m also not seeing any boost given to the 2nd player, or else they’re hiding it very well.

You may not have gotten far enough through the story to learn about that mechanic. It’s what Tom was describing in his review with Paths and Powers; the Path you choose tells you what bonus you get for being player two.

I think it is fare to say this could be an excellent CCG, if it could thrive. Sort of doubtful now.

The art is excellent, but you really need to engage it to really appreciate it…

I may just be new to this whole digital CCG format. I have multi-boxes full of Magic, Versus, Netrunner, Lord of the Rings LCG…it is kind of embarrassing.

I love the art, and I like the gameplay. I think the burn-and-gem mechanic is pretty clever. It’s not always a good play to burn a card, even if you can. I like that extra layer of mana-related decision-making.

The Winter War expansion went live last night. You can enter promo code “enlist” or “resist” to determine which free path you get. 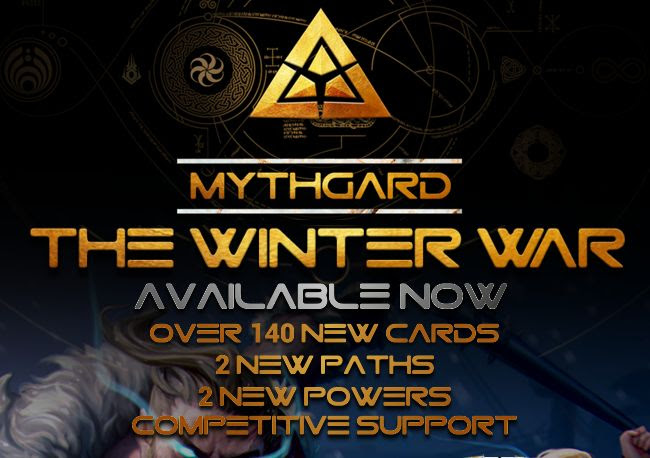 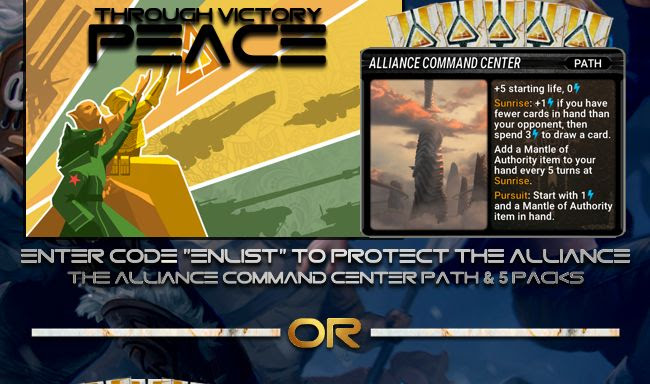 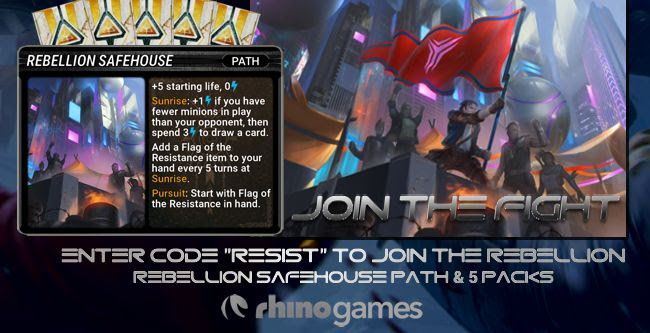 Where do you enter the codes?

Click on the store button on the main screen. If you scroll all the way to the right, past the stuff you can buy, the last option is “redeem code”. It used to be visible from the main screen, but the Winter War content has pushed it off to the right.

Thanks! Jeez, I had a heck of a time looking for that.

Also, I couldn’t find the “redeem code” option in the Apple app, but it’s there in the browser version.

Oh wow, I had no idea there was a promo code for the new expansion. I’ll give it a whirl.

I’ve been playing the game every day since Tom’s review. At a minimum, I play three games, to win my three free cards. I usually play the PvE gauntlet, but lately I’ve been spending more time making my own decks, which can be tailored to whatever missions I currently have.

I’ve played exactly one PvP game so far, the first round of a PvP Gauntlet. I did win that game, but it stressed me out enough that I haven’t returned to it. I really like that Mythgard has so many PvE options.

If you want to play Mythgard as a legacy card game instead of a collectible card game, the developers will be giving away the core set for free next week. Starting on the 17th, they’ll be releasing codes for each color/faction that unlocks all of that faction’s core cards (i.e. everything that isn’t part of Rings of Immortality or Winter War). It’s tied into promotional deals with different press outlets, so the codes will be trickled out over multiple days, but eventually, all core cards will be free.

Wow, I really appreciate the heads-up, as I’d been wondering whether I should go back to opening core-set packs. Fortunately, I’ve been opening Winter War packs since it was released.

I hope releasing all the core cards makes business sense for the studio. I really want this game to succeed. I still play it every day.

And here’s your code for all the blue core cards!

Just a reminder that promo codes can’t be entered in the iOS version, but it’s available in the browser, Steam, and Android versions.

The promo code entry form can be found all the way to the right in the Store’s Home tab.

Cool thanks for the update! Claimed!

Is there a code for today? Can’t seem to get into their discord channel.

Looks like yesterday’s came down at noon PST, so probably another 90 minutes.

Today’s code is for the full purple core set!
“WholesomeHarmony”