So AP picked up this story from The State.

So i did a bunch of googling. Nobody else talking about this. Westinghouse has this fuel rod plant. They made a reactor going online in China, one in Ukraine. There was a reactor in Georgia and South Carolina but they are apparently going bankrupt.

They are getting bought out by Brookfield Asset Management. I googled THAT and you get this little picture.
(Oh someone must have defaced the page in the past, there’s a Justin BEBER currently on the webpage.) 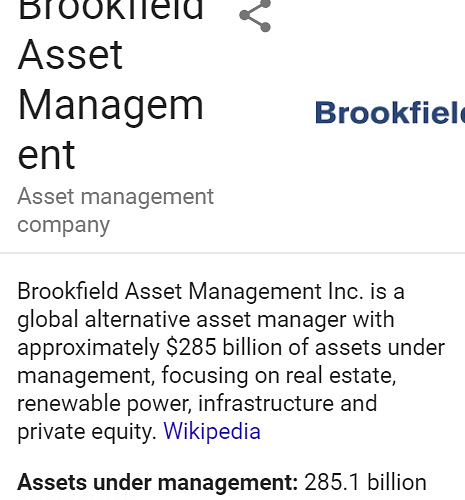 I think that this is likely not really a huge deal. You’ve got a uranium concentration of 4000 ppm in soil a few feet under the plant, from a 3 inch hole. Even if it reached the groundwater (which is somewhat unlikely, given that there’s not going to be constant rainflow there, since the plant covers that area), you’re still left with an amount which, when diluted, would be trivial.

Further, it’s Uranium. It’s super heavy. It’s not something that will easily come back up out of the ground, if it gets down there. Folks always get this idea that somehow radiation “infects” things. Like it’s gonna make the water radioactive or something. That’s not how it works. The water gets radioactive if it actually has radioactive materials in the portion of water you have.

One of the greatest tragedies of ecological conservation in America is that the general population was convinced at some point that nuclear power is super dangerous, and that fear has largely led to our current continued dependence upon fuels like coal.

Interesting enough, Brooklfield (Canada/Qatar) is the guys who bailed Kushner out of the 666 5th Avenue business.

It also seems interesting that nuclear power plants by Westinghouse are going to be built in Ukraine, Saudi Arabia, and China. And that the takeover needs US approval.