Kajaki (Kilo Two Bravo in the US) and the horrors of war. Emphasis on horrors.

I blame @MelesMeles and @anonymgeist for mentioning this movie in another thread. My eyes just kind of glided past what they said, catching on anonymgeist saying something about it being “intense”. So I tracked it down, which was easy enough, since it’s a 2014 release starring no one I’ve ever heard of and directed by a first- (and only-) time director. Easy two dollar rental. Heck, it’s free if I put up with commercials (I’m not having commercials in my war movie!). 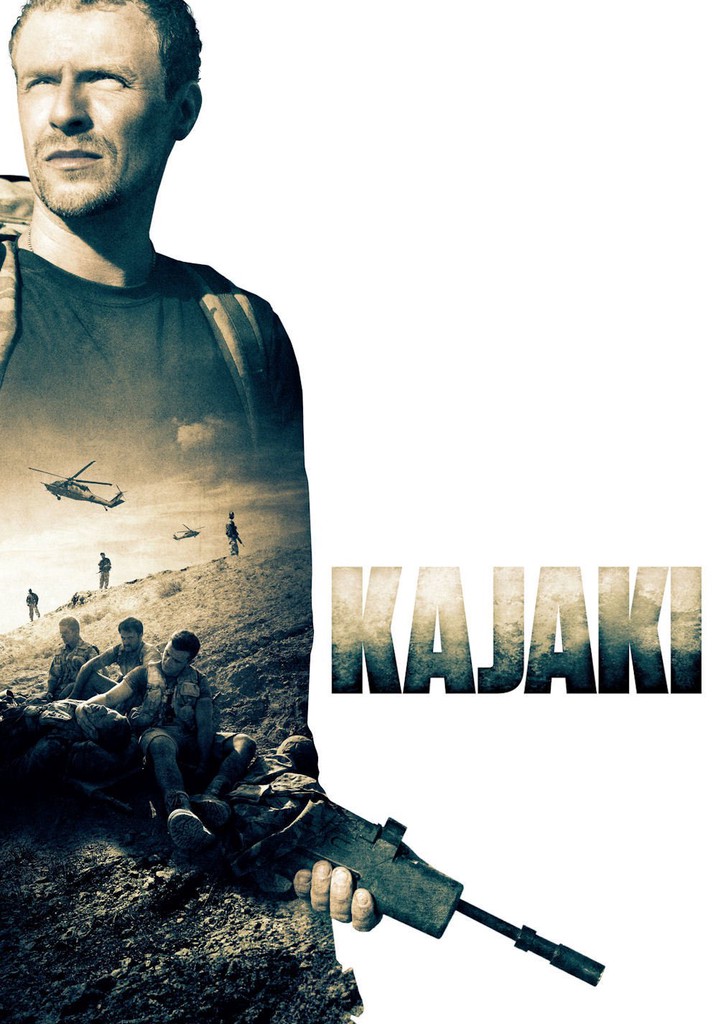 Where is Kajaki streaming? Find out where to watch online amongst 45+ services including Netflix, Hulu, Prime Video.

What could go wrong?

Well, everything because this isn’t what I was expecting. I think I was hoping for a war movie about good people fighting and suffering and dying to further an important cause. It’s what I was in the mood for. I know, I know, it’s Afghanistan, but I’ll take what I can get. Besides, how good can this possibly be if it stars no one famous and was directed by someone who hasn’t made another movie since 2014.

So the first thing that strikes me as I’m watching is that a) hey, this is a group of good actors and the director is doing a great job capturing day-to-day life at a remote outpost. The second thing to occurs to me is that b) I know nothing about the actual events that inspired this movie. So as the movie is unfolding, I have no idea what is going to happen, and it’s pretty intense, because I know something is going to happen otherwise they wouldn’t have made a movie about it. I mean, Jarhead and Generation Kill are great and all, but you can only get away with that “war is dull” angle so many times. I’m pretty sure this is not going to be that.

And it’s not. Furthermore, it’s not even about what I think of when I think of war, because it’s more senseless and absurd and shocking than that.

I’ve been reading high-level stuff about the Civil War lately, about how the Lincoln administration handled the unfolding crisis, and when I think of the Civil War, I always think back to reading a book called Solidering, which is the diary of a Union soldier. He took a bullet through the cheek, which was a fairly innocuous wound, but when he got up to go to the medical tent, he took another bullet through the leg that shunted him directly into the horrors of battlefield medicine. So a lot of his diary is about how the wounded fared back in the 19th century, and it’s utterly horrific. And that’s what war is: a crisis erupts and now a bunch of boys have to stand around in the path of dangerous projectiles that do irreparable harm and then they get jammed up against the limits of medical technology. That’s the low-level look at war and it’s vicious and meaningless, but a vital counterpoint to high-level looks at war.

And that’s what Kajaki is about. It’s as low-level and meaningless and absurd and especially cruel as you can get. It is a horror movie more than a war movie, because it’s an example of war reduced to nothing more than boys subjected to unimaginable violence. It could be Afghanistan, Gettysberg, or Mariupol.

So you probably shouldn’t watch this. But if you want a unique experience, watch it knowing nothing more than what I’ve told you in this post. Don’t even read a synopsis. Go in blind, like the characters in the movie, like the actual soldiers deployed to Afghanistan. And then come back and join the conversation under this post.

Alternatively, and perhaps more wisely, read up on this and decide whether you feel like subjecting yourself to it.

So the first thing to say is, holy jeebus, this was some of the most unflinching gore I’ve ever seen in a movie. Saving Private Ryan did it in terrible glimpses, as befits a filmmaker like Steven Spielberg. But the director of Kajaki takes a documentarian’s approach and just lays it all out there, for as long as you care to look.

And ultimately, because there are no enemy combatants present in the movie, I feel like Kajaki is about the triumphs of battlefield medicine. It’s amazing to me that all but one of the men survived. In fact, I’m not sure this is a war movie so much as a battlefield medicine movie. Which is one of the main reasons it reminded me of that Civil War memoir, Soldiering.

Soldiering is basically a companion piece to this movie, showing how far the world has come in terms of saving the lives of the young men it throws into its meat grinders.

It’s as low level and meaningless and absurd and especially cruel as you can get.

I agree with this, but with the horror comparison being brought up (not unfairly), I think it’s worth saying that it’s knowingly and necessarily meaningless, absurd, and cruel. Often, horror movies (at least, the bad ones) revel in cruelty, and there’s the sense that you’re supposed to enjoy seeing the horrors inflicted. I absolutely did not get that sense from this film. It felt dispassionate rather than lurid.

“A documentarian’s approach” is a very apt description; and I think anything more active or directed would lessen the impact and come off as manipulative. In that sense, it reminds me a bit of New Order, which we recently discussed in the 20:20 thread.

(I’ll add that I watched this movie eight years ago, so my recollections may not be entirely accurate. But the broader experience has stuck with me.)

I thought of making a joke about mines being “tension in a can” for fiction, but I decided against it, because it’s just not funny when it’s real.

Coincidentally, I recently listened to an episode of the QT3 Movie Podcast where Tom raves about No Man’s Land, so now I have two mine-related movies on my list. Probably not gonna do a double feature :)

Ah, of course! I can’t believe the No Man’s Land comparison hadn’t occurred to me yet, partly because I’m still kind of reeling from how awful the experience was watching Kajaki, but also because No Man’s Land is a more like an absurdist play with a bleak ending, whereas Kajaki’s documentarian approach doesn’t give you that luxury, even though it has a relatively triumphant ending. But, yes, these two movies will certainly give you a sense for why Princess Diana would adopt “anti-anti-personnel mines” as a political cause!

So apparently this film is also known as Kilo Two Bravo? (Oops, it’s even in the thread title. Reading comprehension, Canuck!) Because you can stream it for free on Kanopy if you have an account through your local library. Since Tom made a thread about it I guess I’ll have to watch it now.

So I trust no one else watched this? Good. It’s pretty grueling.

One of the parts that really stuck with me and that I think about a lot is near the end, when there are seven or eight of them lying there, bleeding out, waiting for rescue, and the one man who’s been lucky enough to avoid injury says to them, “Okay, lads, what I’m about to say isn’t true at all. I’m only saying it to get a reaction from the others so they know they need to move their asses and get something done, okay? I do not mean this.”

And then he proceeds to call out to all the other soldiers standing around the perimeter and on the nearby hills and hanging back with the satellite phone. He calls out to all of them, screaming wildly about how these men are GOING TO FUCKING DIE if they don’t do something soon.

And the thing is he not lying. He knows he’s not lying. The wounded men know he’s not lying. Everyone knows that the lying was when he said he was lying, and he only said it was lying out of helplessness and a need to offer whatever kindness and comfort he could while voicing his frustration, on their behalf. It was a strangely beautiful moment of empathy and rage.

After reading what you wrote about the movie, I want to watch it. But I’m not sure when I’ll do so.

Frustrating? Yes. Sad? Also yes. A realistic depiction of the sheer pointlessness of war? Mostly this.

Sorry for not jumping on this sooner, I put it on a very long list that just gets longer and longer the more QT3 podcast episodes I listen to :)

I’m glad you pushed for it Tom, it was a good movie. It got a lot more gruesome than I was expecting. It’s really more of a medical drama than a military one, if you forget the fact that some cursed person went to the trouble of inventing the landmine, and some other cursed people went to the trouble of putting them in the ground.

It’s so uncomfortable to watch people in impossible situations like that, but I thought the movie pulled it off really well.

The writing could’ve gone either way - I was really worried when they started reading Kipling in the OP, and even made sure to tell us it was Kipling - but that’s why it’s so good that it became about events, actions and reactions. It kept the actors from being chained to goofy dialogue, and kept the focus where it should be.

I think the worst bit for me was the guy throwing the water bottle, and that small act of care wounding four other people.

The writing could’ve gone either way - I was really worried when they started reading Kipling in the OP, and even made sure to tell us it was Kipling - but that’s why it’s so good that it became about events, actions and reactions.

Ah, yes. Plus Kipling has very specific context and meaning for Brits in that part of the world! Good catch, DoubleMeles. :)

I think the worst bit for me was the guy throwing the water bottle, and that small act of care wounding four other people.

Right? I mean, I thought the helicopter wash was horrific, but then that? That stuff gets seared into your brain, doesn’t it?