Nope. The KS was a mess. If they do more content later and there’s actually good playthrough videos by then, maybe I’ll get to it then.

Awww yissss. I’m on the HI train, too, though I haven’t played Sands yet. I’m totally in on this, though it’s a little annoying having the expansion set as a stretch goal, so to get it we’ll have to readjust our pledge. Definitely getting the Hero Chest this time, because storing this beast has become a bit much.

They’ve done the expansion as a stretch goal every time. I guess to be on the safe side. I’ll be getting it, of course. And proooobably the print version of the Volume 1 campaign they’re talking about offering on this one? Although it’s a free PDF and I bet a 500+ page print book won’t be cheap. So we’ll see. And same re: Sands of Shurax. Although I am putting together a TTS mod for it now, and I think I’m gonna ask Jonathan if he’s up for it being public in case it helps drive people towards the current crowdfunding. If not I’ll at least run a forum game. Which might be a mistake, but, well.

I’ve got the various pdfs downloaded and ready to go for that Campaign for when we can get back together in person- hopefully it’ll be finished by, say, the end of summer when we’d potentially be needing it. I have no need for a physical book, though. Interesting to know about the expansion as a stretch goal- I’m a more recent convert to the game, and just find it a little annoying, though I do appreciate their caution, heh.

Well that didn’t take long. Expansion and Living Card Deck both unlocked and available to pledge. Sounds like this expansion will have a new game mode where the villain won and now is desperately fighting off the Horrors so unleashed and you have to kill them before he loses, which is very interesting. Most of the expansions to date have just been more stuff. And I mean, I assume this will also have more stuff, but hey.

I would like Hexplore It a lot more if (broken record time) it had a decent storage solution.

That’s what the Hero Chest is for! Hold everything!

That’s what the Hero Chest is for! Hold everything!

It holds Heroes and their associated stuffs, as the name implies. Everything else like tiles, dice, tokens, other cards, etc still go in the core boxes. I guess it does help though. :)

Yeah, it just adds an extra box. Which, what the heck do I need another box to have to find space for?

Wait, really? That’s less exciting- I was under the impression it held everything. On the other hand, that’s all the stuff that’s usable between the various sets, so it would help somewhat. On the other, other hand, really, I used the app for all that my last few games and it was good for that, so it seems like we put all that stuff in the chest and then just leave it there. Solution!

Are the ‘Living Card Decks’ worth bothering with?

Also what was the feeling on Shurax? The open world and added complexity got some backlash and it seems they’ve backed off that direction for the new game.

If you put all the hero stuff in the hero chest, everything else fits in the core box for each volume (although I can’t really figure out how to stack stuff for zero lid lift on Sands of Shurax, IDK) and you can toss the expansion boxes. Also, it makes it convenient to use all the hero stuff together no matter what you’re playing.

Also what was the feeling on Shurax? The open world and added complexity got some backlash and it seems they’ve backed off that direction for the new game.

I think it looks cool as heck but with it arriving during COVID and there being no digital version of any kind, that’s as much as I can say. Like I say, I’m working on fixing that for me and my group, at least. We’ll see if Jonathan is up for it hitting the Workshop.

On the other, other hand, really, I used the app for all that my last few games and it was good for that, so it seems like we put all that stuff in the chest and then just leave it there. Solution!

Well, not really. Unless I’m missing something the app doesn’t tell you what any of your role, race, etc abilities actually do.

Are the ‘Living Card Decks’ worth bothering with?

The vast majority of the cards in them are stuff you can look at free online with a QR code reader or a visit to the website if the like two living cards actually come up. The only thing that’s unique to them are a few “Peril” cards. YMMV if physical copies of that stuff (which again, will rarely be encountered) and the Peril cards are worth it. I’d tend to say no unless you’re resistant to tech involvement in your games, really want to future proof against the website possibly going down, or are a completionist like me.

Thoughts on these new AuZtralia expansions? I never played the base game but was always curious:

AuZtralia Big Box + Revenge of the Old Ones and TaZmania!

Two expansions for the acclaimed AuZtralia game by Martin Wallace

And I recall being keen on this cardboard spin on Commandos: Behind Enemy Lines at one point, but it was almost impossible to get hold of:

Thoughts on these new AuZtralia expansions? I never played the base game but was always curious:

I remember there’s a Qt3 podcast about Auztralia, but it’s been a long time since I listened to it.

I’m pretty surprised Auztralia is getting expanded! It’s a weird game. It’s a light route-building game that’s not terribly interesting, but becomes somewhat fun with random monsters appearing that can wreck your route or give you points if you kill them. It’s a high degree of randomness. Sometimes you want those enemies near you so you can farm them for points, other times you’re praying the go the opposite direction. It adds drama, but not much strategy.

I thought it was fun for a play or two, but not a game worth revisiting. If it sounds up your alley, I’d suggest just the base game. The base game came with 2 maps, but they weren’t interestingly different that it was exciting to replay because of new maps.

Also really minor complaint, but they use the a terrible font type and it really drives me nuts. It looks like they’re continuing to use it in this production. It’s completely unreadable at a distance, which is where the enemy cards will be placed.

One of the expansions has a player take over running the old ones which could be interesting. I’ve never gotten around to actually playing AuZtralia though, and I’ve never really run into anyone who seemed wildly in love with it, plus Tom’s not a fan, so I dunno that I’m likely to expand it.

I’m on the fence for V-Commandos… but a one-year wait, ugh. You can get all in without minis, that’s a great option. No paint job required, just tokens. But one year.

That’s KS for you. If you want the stuff that exists currently right away, there may still be copies floating around although I think it’s getting scarce. But I’m not gonna bother trying to track stuff down. KS is way easier. and maybe in a year I’ll have made more space for it. :P

I’m on the fence for V-Commandos… but a one-year wait, ugh. You can get all in without minis, that’s a great option. No paint job required, just tokens. But one year.

I’m getting the all-in, without the minis, mainly for solo play. This one is pretty tough to get, especially if you want expansions.

It’ll be a nice present in a year, which will come around faster than I’d like I’m sure. :)

I went all in deluxe for V-Commandos and bought a core box for cheap on ebay. I might keep the deluxe or sell it, depending on how I like it. But there is a lot of positive feedback on the game system.

The Shadow Planet: The Board Game

A sci-fi board game of paranoia, horror and strategy for 3-5 fearless astronauts… and other beings.

All right, I’ve put down money for this. I like the old school sci-fi/horror mix, though I’m not usually into the ‘hidden traitor’ type of games. Maybe this will be a first.

Okay, here’s the thing I backed. A 133-card Tarot deck, with all the cards coming from other tarot decks and unique cards drawn by the artist, etc. 9 Death cards! 2 Devils! The Tower is a run of 3 different cards! Weird stuff invented for the deck, like the 3 of Books! I don’t really ‘do’ the Tarot thing, (and certainly don’t believe in any occult nonsense), but I collect odd decks, sometimes-I have the Vertigo tarot from the comic book imprint back in the 90s (love that Dave McKean art!), and I have a Tarot deck based on Cultist Simulator for example, among others.

The biggest back to this is that it’s almost been too successful, in my mind. At this point, he’s sold over 6000 decks. Initially he was hoping to sell 1500. The amounts do mean he’s paying his artists more, and is planning on a couple extra 15-card packs (getting the deck to over twice the size of a classic 78-card deck), which is cool, but the having a cool, weird-ass deck of only 1500 copies is a little different than one of 10,000. Ah well. 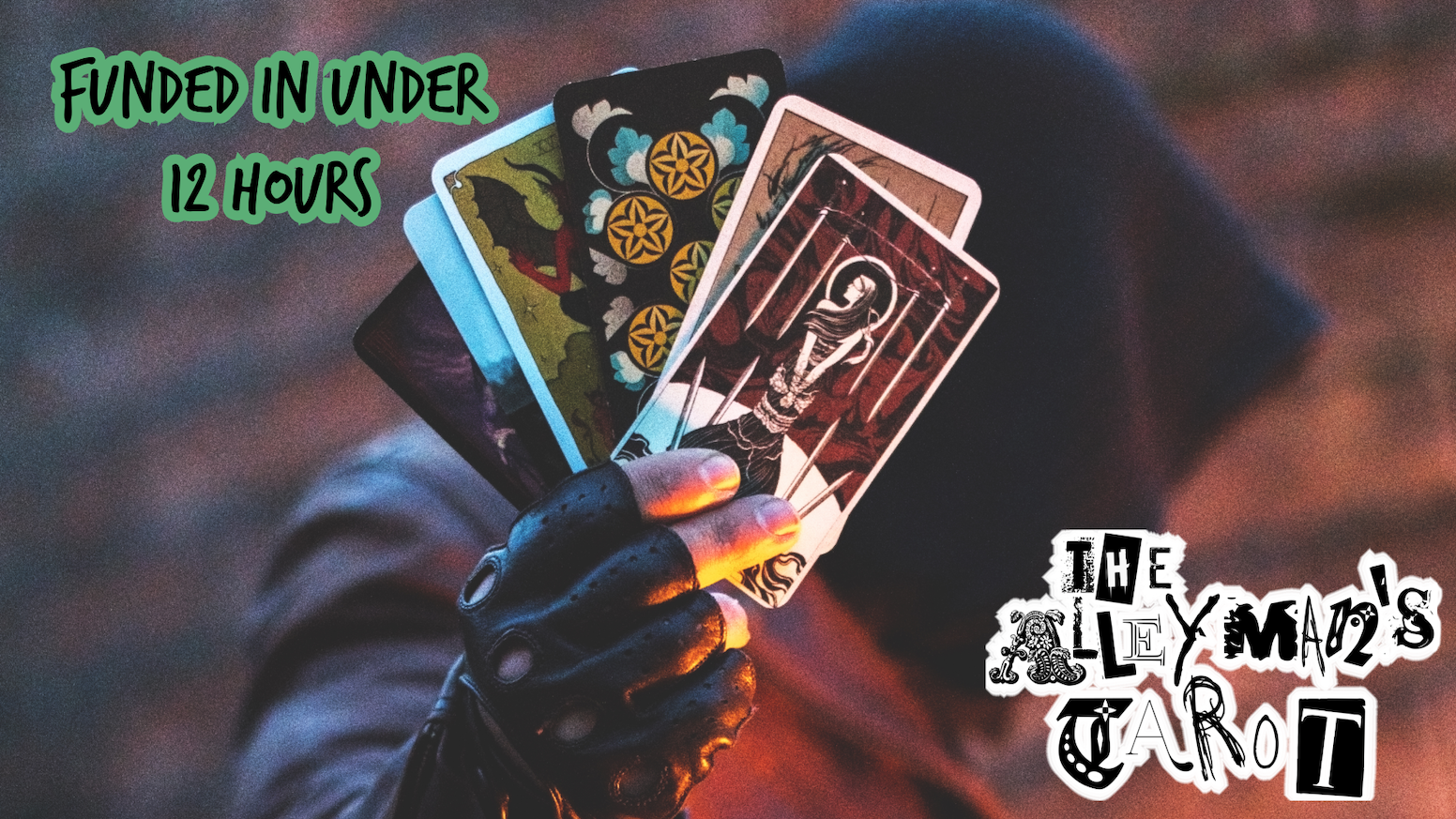 A mismatched tarot deck made up of 133-cards from other decks, old and new alike.