Kids Need a Mexican for a Class Project

My kids have been attending a Spanish immersion school since they were in kindergarten. They’re big 8th graders now, about to move into high school, where the “immersion” part of school will change, so that they’re essentially only doing a single foreign language AP class. So they’re “graduating” from the immersion portion of the program.

For their final project they have to interview a native Mexican, who speaks Spanish. It’s a crazy project for so many reasons. A Mexican? Where are we going to find a Mexican. We live in goddamn Seattle. Plus, it’s just so ethnically specific. Meanwhile, Seattle is so liberal and progressive people tend to discount ethnic/racial differences, so this is putting ethnicity squarely into focus in ways I haven’t really thought about, and that make me feel somewhat uncomfortable. “Hey. You Mexican?”

Why not just task them with interviewing someone who doesn’t speak English? They’re in a Spanish immersion class, so it’s hard to imagine they’re going to interview a Russian or a Texan or something.

We tried to coordinate a Skype interview with family friends from Mexico who we haven’t seen in years, but the logistics and technical challenges were too great to overcome. We have all sorts of ethnic friends, but no Mexicans. It was very frustrating. Finally, end of semester approaching, they loosened the requirements to any Spanish speaking culture, which opened up the door to my son’s in-laws, who are from Cuba and Costa Rica.

Will be interesting to see what the interviews look like. I know my family wasn’t the only one that had a hard time. I know of at least one family who went to a Mexican restaurant and interviewed one of the wait staff. The kids were supposed to get pictures of the people they interviewed, and when the cameras came out, the restaurant staff all got a little antsy. Does that just seem – I don’t know – awkward? Ned Arnel Mencia (born October 22, 1967), known professionally as Carlos Mencia (and previously Ned Holness) is a Honduran-born American comedian, writer, and actor. His style of comedy is often political and involves issues of race, culture, criminal justice, and social class. He is best known as the host of the Comedy Central show Mind of Mencia which produced four seasons before being cancelled in 2008. Mencía was born in San Pedro Sula, Honduras, the seventeenth of eighteen children. His m...

Tim, could you use a less offensive term?

(That and “Motel art…” are the only quotes I know from the American version of The Office.)

I know three guys named Murphy, Krueger and Svensson and they’re all White.

Did you ever try looking at language partners? There are any number of websites where you can say I want to speak with a native speaker who speaks this language, and are willing to trade experience with your native language. Then you get matched up and Robert is your father’s brother. Not sure if saying “only Mexican native speakers” is an option, but it wouldn’t surprise me.

BS the interview and photoshop the picture.

A Mexican? Where are we going to find a Mexican. We live in goddamn Seattle.

As of the 2000 census there were 7902 foreign-born in Seattle originally from Mexico.

The really easy way is to note that Seattle has a Mexican embassy. Really.

He may know some Mexicans.

Seriously Tim, do you think this reads the way you meant it to?

Kids Need a Mexican for a Class Project

Holy shit are you in such a bubble that you believe there are just white people in Seattle?

The problem is he’s holding himself to rigid requirements of the project. Seriously, I doubt they would know or care if your kids spoke to native speaker of a spanish speaking country. Unless they had to ask questions that might only be specific to Mexicans.

Actually my wife, who used to live in Seattle, says Mount Vernon or Monroe.

Tim, could you use a less offensive term? 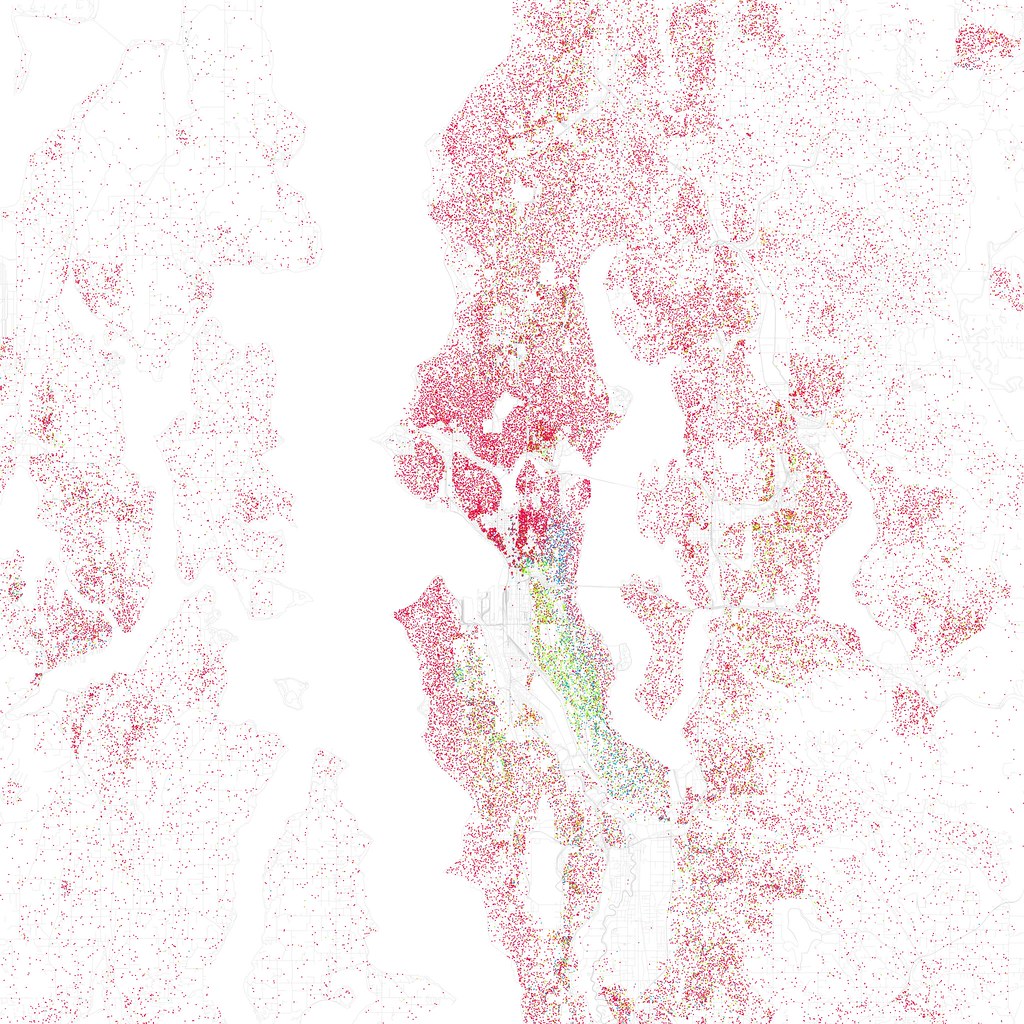 Red is White, Blue is Black, Green is Asian, Orange is Hispanic, Gray is Other, each dot = 25 people. Just follow the orange dots.

As of the 2000 census there were 7902 foreign-born in Seattle originally from Mexico.

The really easy way is to note that Seattle has a Mexican embassy. Really.

I did know this! In fact, one of the friends we tried to Scype in Mexico worked at the embassy. I’m not saying there aren’t enough Mexicans in the area for the class project. I’m saying the requirement is sort of odd. You have to ask all your Hispanic friends, “Say, are you Mexican?” If they’re not, you can’t just shake your head, sigh, and walk away in disgust.

Or wait. Are you suggesting calling the Mexican embassy to setup an interview? Man, that’s actually a pretty good idea.

Just head over to Home Depot, dude. Day workers would probably love to talk with your kids.