I know you are big on xbox achievements, but I would not recommend the windows store version. I remember reading on reddit some people having issues with their savegames on the gamepass (windows store) version. The way the game files are encrypted there can lead to some unreliabilities.

Btw, Switch version of Kingdom Come was announced. Made by Saber and supported by Warhorse (who are making yet unannounced KCII).

I know Saber managed to get Crysis and Witcher 3 to Switch in surprisingly good state, but I am still really curious how KCD is going to look and run, given how…imperfectly it ran on last gen base consoles.

Thanks for the warning!

Yeah, if the price on Epic store was $2 higher, it would be only $5 total and a total no-brainer. But $13 still seems a good price for the Royal edition, both on GoG right now and Epic Game Store. I assume those two versions are the same as Steam version since none of the files should be encrypted.

I assume those two versions are the same as Steam version since none of the files should be encrypted.

Yep, Saber is going to have to do some magic to make it look decent. At least it runs on smaller display.
Funnily enough, the Switch version was never originally planned and only came about by accident - someone at Japanese publisher posted that the Royal edition is coming to PS4 and Switch, it was a mistake, but apparently the response was good so the Embracer people discussed if it would be possible and people from Saber were into it…

Other than a few crashes I had no real problem with the Steam version.

$13.59 is the lowest recorded Steam price, recorded back in March of this year. Steam Summer Sale starts soon, and I suspect that 66% discount will make another appearance.

Another down side to purchasing any game on the microsoft game store, is the inability to mod the game. I love playing games on the Gamepad, but would never buy a PC game there.

Another spot I check for sales in cdkeys I’v bought a few there, and never had an issue. I think the royal edition is about $20 there right now.

Wtf no game on the microsoft game store can be modded? Are you sure about this?

I havent tried in over a year, but if there’s is an in game mod store, like fallout 4 for example, then you can. But if your looking to modifiy a game file? Good luck finding it. Microsoft had them locked down…

Like I died an embarrassing amount of times during the horse escape sequence and I still don’t know what I did to pass that section. I was always like at 1 hp, riding in a zig-zag patterned with 3 horseback archers right on my ass launching arrows at me constantly for like a solid mile. Jesus be with you.

The first four quests, Unexpected Visit, Run, Homecoming and Awakening are all very much on rails but the game opens up gloriously after that. I died numerous times on Run as well, trying to figure out the horse riding (stamina versus speed), which way to actually go and how to avoid the arrows. Just tell me you saved Theresa by distracting the mercenaries.

Just tell me you saved Theresa by distracting the mercenaries.

Yes, I believe so but it took a few tries also. Run down the hill to the horse. Women cries for help. Three dudes groping her. This is the first real combat encounter in the game. Let’s do this. Get ganked horribly but as I died I noticed there was a quest update.

Second try I bobbed one on the head and ran for the horse but didn’t know the hot key to mount in the frenzy. Died.

Third time I went up to the horse first to note the hotkey needed, then poked one of the guys in the back, ran back and mounted the horse and was off to the die-repeat arrow dodge races.

Good enough, you’ll be rewarded later ;) At that point it should have told you how to whistle for your horse and a whistle is enough to distract the three guys so you don’t need to go near them.

If you woke up in Rattay mill, then you are over the prologue and the game is fully opened up.
I would still recommend doing few story quests first, if only to get to train with Bernard a bit.

That’s a given, but the game introduces new mechanics all the while under extreme pressure. The only exception to this I found was the sword fighting mechanics with the trainer in the sheep pens, but ironically that matters the least since all sword fighting encounters in the prologue are gank squads.

You forget. They are “battering” Theresa directly. There is no door in this. 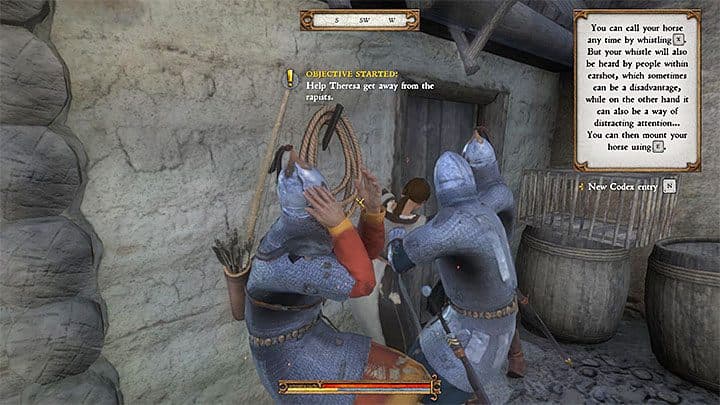 Ah right. But you were told you could whistle at that point.

You are talking about a tooltip for whistling for a horse = also it so happens to prevents rape in this specific moment too! An introduction.

No, I choose to draw steel every.single.time.

No, I choose to draw steel every.single.time.

In the early game, that’s like saying “I choose to reload a save game every.single.time”. Until both you and your avatar get good, combat can be a bit frustrating. Getting as much practice as possible in a non-lethal situation is pretty important.

Not really. In fact I would push against that based on the only counter argument I see right now is “the pop-up tooltips tutorials will save us” which is bad…, but also which appear under extreme distress situations.

Talk about bad timing. They needed to forecase this in calmer waters like the sword fighting which does not ever matter at this point (do ya get it…)