Legend of Zelda: Breath of the Wild

I’ve been playing BotW and I’m about 10 hours in. I’m really enjoying it in general but the weapon durability thing is really starting to get tedious. Weapons seem to break so fast that I fin myself not wanting to explore since I will go through so many weapons and it’s so tedious to constantly be scrounging for a weapon.

Did anyone else find this super annoying? Or do you get better weapons that last longer soon and it’s just early game stuff that has such low durability? (I feel like weapons break after just killing a couple baddies, it’s absurd how fast they break).

Did anyone else find this super annoying?

It’s the main reason I put this down. I think there are a couple of unbreakable weapons, but I don’t think you can get them til late in the game. I could be wrong about that though, and if I could get unbreakable or at least longer lasting weapons I’d prob go back to it.

I wonder what design idea they were trying to accomplish with weapons degrading so fast, and did play testing not reveal that it just wasn’t “fun” to have them breaking so fast?

I grew to love the weapon durability model once I reframed things in my mind to think about weapons as “ammo”.

You’re constantly getting new weapons, better weapons, over and over again. So I eventually became less afraid of just using what I wanted to. Something else cool was right around the corner or in some enemy I defeated.

I grew to love the weapon durability model once I reframed things in my mind to think about weapons as “ammo”.

Keep one or two powerful ones in case you run into something particularly tough, and then just rotate through whatever else comes to hand, and you’ll be fine.

I’ve been playing BotW and I’m about 10 hours in.

The early weapons break easier then the mid- and high-end weapons. I’m starting to find “Knght’s” equipment and it lasts for ages - so long that I’m having to cherry pick incredibly powerful elemental weapons and guardian ++ weapons with named abilities to make room for even better stuff.

The weapon durability thing is only really an issue… honestly it’s ever an issue. The game provides you more weapons than you can carry at every turn, and it’s a really fun way (imo) to bake in lots of variety in weapons and give players a reason to try them all out. I’ve had to drop more powerful stuff than I got to use just to make room for even better stuff - the weapons the enemies carry (and thus what you find) scales as the game time moves on, the world gets more dangerous but by then you have upgraded armor, more health/stamina, and better items as well. I really like the system, to be honest. 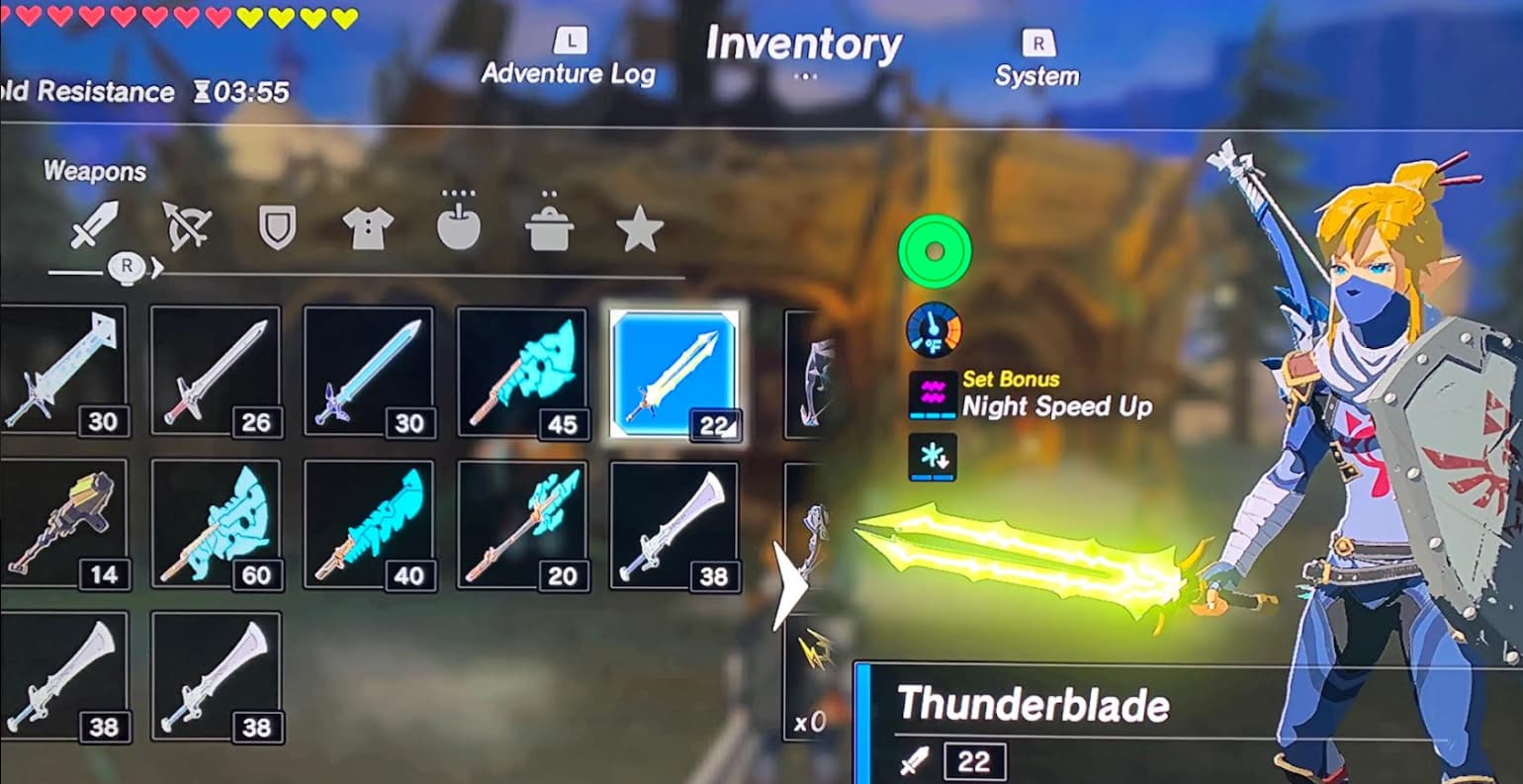 I just ran through a camp of high end goblins all armed with powerful bows and Knight Claymores and other Knight gear - it was a brutal battle but I used just two weapons through all the 7 or so enemies, many smacks per to kill and I ended up dropping my Claymore to pick up a brand new one and my Thundersword lasted the entire battle (you only need to swing it once then swap over to another weapon though). I left amazing Knight gear on the ground, just sitting there, not enough slots to pick that stuff up - and I’ll never need it - I’m at the point where I’ll find/get more powerful stuff, so I’m using my best weapons right now - more will come.

It mostly just hides the super simple combat model. If you enjoyed that it forced you to always be swapping out your weapon for a new one, that is a perfectly reasonable opinion. I mostly grew to hate it and was more focused on finding some silly pitchfork than the awesome world. Or conversely, never using the cool weapons you do find due to them breaking after a dozen whacks.

I don’t know if it’s super simple - or maybe it’s just a bit more complex to me. I find models that allow for physics, blocking and dodging attacks, and counter attacks as well as quickly switching to ranged and back to melee as needed, with a variety of arrow types and elements that do different things (and that the enemies react to, such as fire, ice, and lightning) to be super engaging, personally. Oh, also the toys! Like remote bombs and stasis! A lot of what makes it work for me though is probably the enemy reactivity and the way the systems all interact.

I don’t know if it’s super simple - or maybe it’s just a bit more complex to me.

To be sure, I’ve played maybe 10-15 hours total. And I avoided combat due to the whole breaking thing, so I can totally see where some of the possible nuance of the combat model was missed by me.

I gather it gets better later, but i was having to swap weapons three or more times in fights and that was just irritating. It wouldn’t have been so bad if it auto-equipped a new one when an old weapon breaks, but having to dig through the inventory multiple times like that just killed the experience for me.

You just hold d-pad right, select a weapon and let go of d/pad and fast equip what you want. Auto equip would be terrible. You can fast equip shields, arrows, and bows this way as well, you don’t need to go all the way into inventory except to swap armor and eat food or drink an elixir.

Mid to late game weapons are so much more durable and powerful, in effect the weapon switching becomes largely irrelevant. Yeah they break, but the attrition rate is low enough you are more likely to replace it for being weaker before it breaks.

The tuning of the system isn’t great, and really puts the screws to beginning the game.

The weapon durability encourages experimentation. It, plus the soft scaling, had me stop hoarding items and I just use whatever I have because I kept getting good replacement gear. It got to the point that I accepted a sidequest to show a kid a basic sword and I kept getting elemental or knight’s gear that didn’t qualify.

Believe there is technically only one “unbreakable” weapon and it uses a different mechanic so you can’t just spam it forever either.

Like someone else in this thread, I bounced off after about 20 hours around launch, but the DLC sale plus something else had me decide to hop back in this summer and once I got used to how BOTW does things, it sucked me in for another 150 hours.

The weapon durability issue was a drawback that I got used to, but I was overwhelmed once I got the camera and taking photos became a thing I was tasked to do (then wanted to do, because I’m a collector/completionist type). Other games drew me away, eventually, and getting back to BotW became rather daunting. I’ve yet to return even though I thought it was fantastic.

For me even the dpad swapping just feels fiddly, especially when I need several weapons to dispatch one small group of baddies.

I’m glad it’s fun for you, but I fear the durability is a mechanism that is implemented not to my tastes in BotW.

It’s not annoying enough to get me to give up on the game, but it just feels like hassle to me. I think I’d be more into finding cool epic weapons that I can upgrade than the constant churn.

I’m actually glad to hear there are those out there that think its cool though.

Just one more echo for “it’s much worse early on, and you’ll be swimming in weapons shortly.”

I mean, if you hate it you hate it. I personally went from mild dislike to neutral on the feature.

I have used these successfully. Half the price of a Pro controller.

Nice! Thanks! I’m going to bookmark your post for when I finally need one.

Looks like they don’t make those anymore. Maybe I should have ordered one back then?

Amazon does suggest this thing, which is made by a different company, that sounds like the more modern version of those: 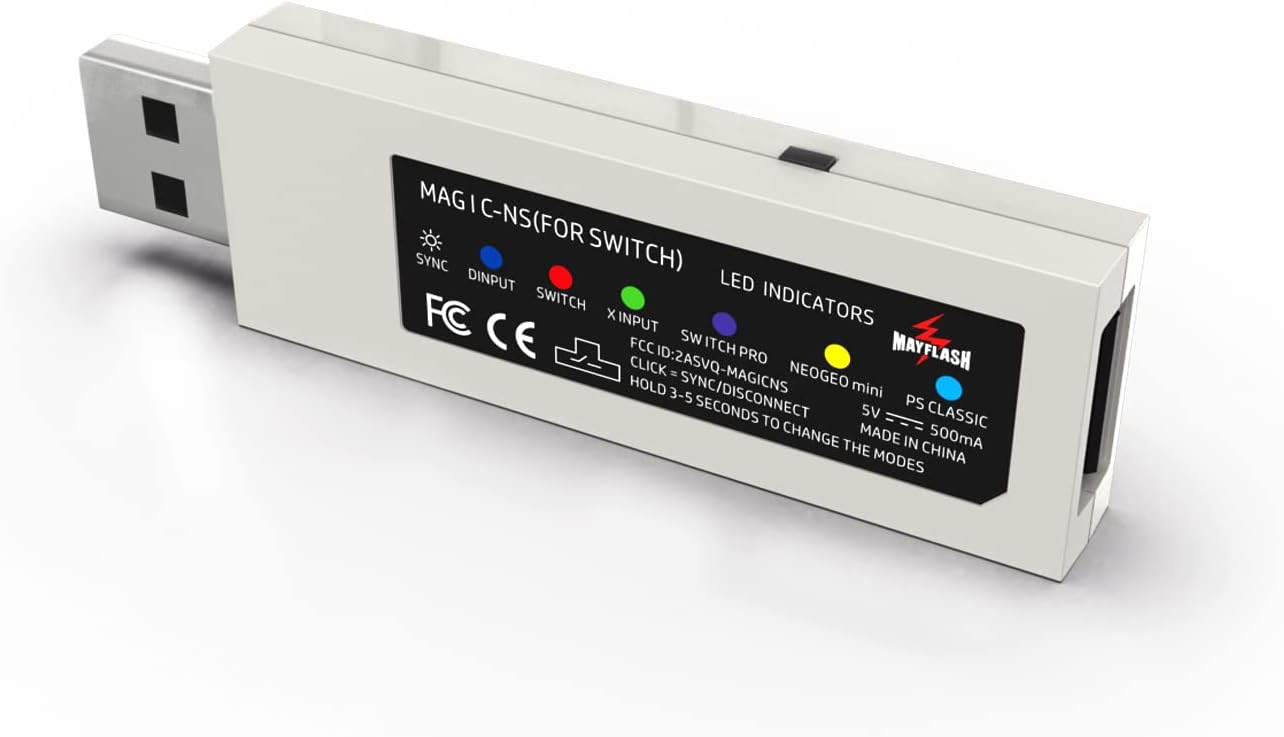 Did anyone else find this super annoying?

Yeah it was one of the bigger complaints about the game. It’s meant to encourage you to find creative ways to defeat enemies using your other powers and interactions with the game’s physics systems.

Personally it didn’t bother me at all. As mentioned above, I also just kept a big stockpile of weapons and used the weaker ones unless I faced something that required one of my more uber options. I don’t think I ever ran out of weapons other than maybe in the first hour or so outside the tutorial.

From memory the only annoyance for me was swapping between them could have been easier.

Yeah, I do wonder if just the tap of a shoulder button calling up a new weapon would be less tedious?

Anyway, it’s not enough to put me off the game yet, but I definitely dislike it as a design choice.

Main reason I stopped playing 6 or so hours in was the weapon breaking. In a game where being in the world can be so much fun, constantly taking you out of it, and reminding you you are playing a video game is a huge mistake, at least for me. It doesn’t help matters that the inventory system would be embarrassing in 1998, much less in current gaming.

Being constantly pulled out of the world, and back into my inventory absolutely killed this game for me. I keep meaning to go back to it, but every time I do I quickly put it down for the same reason. One of these days I’ll force myself to stick with it, as I would like to see the entire game.