For some reason, this game doesn’t have a thread yet. It came out originally for the Gameboy in 1993. I never had a Gameboy, so obviously I’ve never checked it out. Then it came out as Link’s Awakening DX in 1998, for the Gameboy color. And then it came out in 2019 as a sort of re-imagined/remake that looks 3D but maintains the same 2D gameplay. It’s really cool so far, about an hour into it.

It reminds me a lot so far of the original Legend of Zelda for the NES, which I played and played and played over one long week when I visiting my cousin back in the mid-to-late 80s, until we finished it. You start out in this one with just a shield. And then you get a sword.

I spent way too long in the fishing game, which I’ve really enjoyed so far.

There’s a claw game where you control the claw to try to get prizes, and I’m 99% sure it’s rigged, since despite my best efforts I haven’t been able to pick up the Yoshi doll without it falling down again before it gets to the prize bin.

Has anyone here played this? Either the original or the new remake? What do you think?

Has anyone here played this?

I played the original on the Gameboy in 1993 and loved it. Haven’t played it since though (unless you count every Zelda game since then, which are all just graphical upgrades on the same formula.)

I played the 2019 version and really enjoyed it.

Only played the Switch version, but rather enjoyed it.

It’s no Link to the Past or Minish Cap, but it’s pretty good. I hope some heads rolled for releasing it with the performance issues, but c’est la vie.

I play the original 1993 version but on my friends gameboy. I think it is considered one of the better Zelda’s in the series.

Glad I’m not the only one who thinks the “Trendy Game” is rigged. 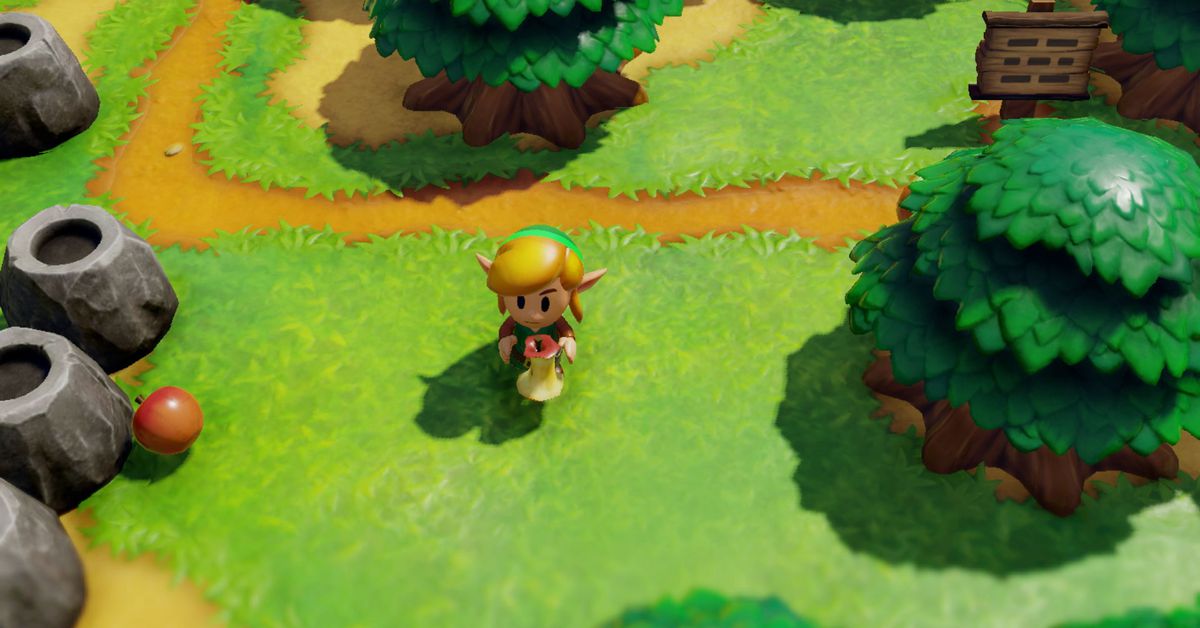 Apparently it’s only the 2019 version.

Honestly, it feels like there’s a big glass pane that we can’t see that’s preventing the toy from making it to the prize bin. I think I have to grab the whole Yoshi doll within the claw so that none of it is below the claw, otherwise it hits that invisible glass pane.

I played the original GB version, thought it was ok but not great. I think I got stuck in some late-game dungeon and set it aside. I still have my copy around here somewhere; I should pick it up and give it another go. Ha ha yeah, I’m totally going to do that.

I played the GBC version and liked it, but don’t think I finished it (then again, I think the only Zelda I ever finished was the first one). Also got stuck in a dungeon and put it aside. Been meaning to pick up the remake, but waiting for a good price drop/sale as I know I won’t get to it anytime soon, anyway (picked up BoTW two years ago and only put about an hour into it).

I have a funny relationship with the series: I loved the first game and Link to the Past; and I’ve picked up most of the other releases but only ever play them briefly, with the intention to get back to them and rarely ever do. They just don’t grab me like those first ones did way back, and I just can’t admit that maybe they’re not my kind of games anymore. Yet, I still get excited when a new game is announced.

Wind Waker was probably the only one I put any significant time into. Started Link Between Worlds and was really liking it, so I probably will go back to that one, but none of the 3D ones aside from WW did it for me. Same with the DS releases.

(I have the same relationship with the Metal Gear series - I loved the first Playstation MGS, played through it twice when it came out. The second one on the PS2, never got out of that first area. Snake Eater I also only played a little bit. Have had the last one for a while, still haven’t touched it. I did play the hell out of the GBC Metal Gear game - man, that packed a lot of gameplay into that tiny GB cart).

I love Link’s Awakening and any of the other Zelda games (Majora’s Mask, maybe others?) that have Link go on fun side adventures that aren’t pertinent to the canon. I have yet to play the 2019 version, but it’s on my list.

That’s interesting - now that I reflect a bit, I generally prefer the 2D entries of most series to their later 3D updates. That goes for Metroid, Zelda and Metal Gear for me. Not that I don’t like the 3D games, in fact I very much like Ocarina of Time - I just usually don’t find that the additions to the games are all that valuable, and I kind of prefer the basic, stripped down gameplay the 2D games have. Kind of keeps it to the essence of the games, I guess is how I would put it.

Man, this game is tough. Not as tough as Ocarina of Time, mind you, the puzzles in that one just defeated me finally, I really was bested by that game. It’s the game that taught me I hated puzzles in games. (A lesson that I unlearned via Braid many years later, which again taught me that wait a minute, I love puzzles in games!)

Of course, here with Link Awakening, unlike Ocarina of Time when it never occurred to me look up solutions online, I could just ask Uncle Google, and he’ll tell me the answer, but I do want to resist doing that as much as I can.

Meanwhile, I discovered in the forest that I wasn’t at a complete dead-end because I can push huge rocks! WTF? Link makes a big show about not being strong enough to lift a plant, but he can push huge rocks? Man, I really hate twisted non-intuitive video game logic. What’s funny is that despite discovering this, I still didn’t get anything in the forest that helps me advance in the game. So really, the answer lies in the bananas somehow. There is a monkey that’s throwing nuts and bombs at me. Maybe I can get him the bananas somehow?

(Not enjoying these puzzles so far).

The gift exchange thing goes through most of the game. Take it as it comes.

I googled some of the puzzles, for sure. They can be pretty arbitrary. I regret nothing.

By the way, the overworld music from this game has been stuck in my head all morning.

And it’s quite pleasant! The flute and the violins really flow well together. I know there’s quite a few at Qt3 who hear the midi-sounds of older games in the same way in their heads, but not me. To me, those are annoying midi-sounds, whereas this composition has wonderful real violins and flute, which makes a huge difference when it’s playing in your head all day the next day.

Oh I’m all for the bleeps and bloops of old hardware, but the lovingly orchestrated score is a high point of this remake, agreed.

I just finished this on my Switch the other day. The music is great, it looks great, but I really disliked the how the game continually locks off progression until you go find one, specific location on the map that lets you continue - without any clues on where that is! It seems you’re just meant to wander around until you randomly come across it. That’s 90s game design I guess.

It seems you’re just meant to wander around until you randomly come across it. That’s 90s game design I guess.

This is well said. What’s funny is that they could have easily dropped some hints in the dialog when you’re searching for the next thing, but they clearly chose not to, even in this remake.

Currently I’m stuck in the first dungeon, which is a LOT harder than I was expecting.