Oh my, I just discovered the eye icon that displays a card’s full-screen art! Glorious!

In general I admire the UI. I do wish the collection screen had more stats, like number owned/unowned. I see a redditor has made a collection tracker. I might try that.

Likewise, I wish the deck list had a bit more info on each card in the collapsed view. I see the card outlines are subtly colored to show region, which is helpful. And champs are highlighted. Kinda wish epics/rares were highlighted too, and maybe spell/ally or certain keywords, but that may be asking too much.

I may actually install league of legends just so I can grok the lord better. Or not. I kinda hate mobas heh.

Edit: apologies for all the questions. Now I’m wondering about the hex-shaped buffs/equipment I get when playing a path. Is this only a path/lab feature? I like it a lot.

I may actually install league of legends just so I can grok the lord better. Or not. I kinda hate mobas heh.

I’ve never played LOL, and never plan to. I suppose I could look up the lore, but what Legends has is enough for me.

Now I’m wondering about the hex-shaped buffs/equipment I get when playing a path. Is this only a path/lab feature? I like it a lot.

Yep, just in labs. Those, as well as the deck customization via pick-a-card, really change the game from a normal TCG style to more of a Slay-the-Spire-like.

Every once in a while, you get something crazy playing Path of Champions. This just happened: 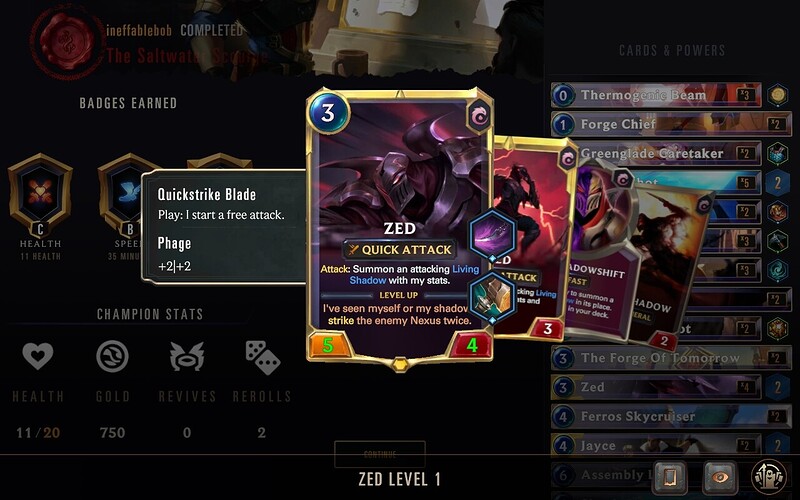 I may actually install league of legends just so I can grok the lord better. Or not. I kinda hate mobas heh

Watch Arcane on Netflix. It’s a brand new series in the League universe.

Watch Arcane on Netflix. It’s a brand new series in the League universe.

Interesting! I’ll give it a look. Do you like it?

On top of that, I also got the power that says when you play a champion, summon an ephemeral copy of it.

Sounds awesome. Normally we can’t have two champions summoned at the same time, right? But I guess there’s an exception for a champion and an ephemeral copy of it? In fact that seems like part of Zed’s regular kit, if that card is his normal card. I haven’t played him yet.

The two equipment you got for him are nice too. Starting a free attack, and Phage. Effectively that gives you two attacks when you have the attack token, right? Sorta like having Scout but better, since others can join in the free attack?

I just tried Jinx’s third path, which leads to Gangplank. In that final encounter, the pirates are manageable until you get them below 20, at which point all their damage doubles. I thought I was doing okay, but I learned the hard way that you gotta kill em in one big shot once they’re under 20 health. Because they one-shottted me down to -37 nexus health, lol.

Interesting! I’ll give it a look. Do you like it?

But I can’t comment. Because family reasons have prevented us from starting yet (we want to watch it together). :/

It seems really good whether you know League or not though. And it will teach you the backstory of some characters you mentioned.

Normally we can’t have two champions summoned at the same time, right?

There’s actually no rule against this, but it’s hard to pull off. When you have a champion card in your hand and the same champion on the battlefield, the one in your hand turns into a spell. So you can’t ever summon a champion that you have out. But if you get a copy some other way…like that power I had, or maybe the 7-drop follower that summons a copy of the strongest dead champion…then you can have two, and they coexist just fine.

Starting a free attack, and Phage. Effectively that gives you two attacks when you have the attack token, right? Sorta like having Scout but better, since others can join in the free attack?

Not quite. A free attack means that when you play a unit, that unit attacks by itself, without using up your attack token (if any). It’s worth noting that you do not get to choose an enemy to challenge if you free attack with a challenger unit, but you still get any abilities from the unit that trigger on attack. So in Zed’s case, his attack trigger summons his shadow even on the free attack.

Arcane on Netflix. It’s a brand new series in the League universe.

This is on my watchlist! The only negative I’ve heard about it so far is that season 2 isn’t out yet. :)

Wow, great thread! I loved the trailer and a couple of the music videos you and others linked. I’m going to watch episode 1 with my kid tonight.

@ineffablebob Thanks for the clarification on the free attack. Bummer that you can’t use the Challenger ability during it; that could make it unappealing in some circustances. But otherwise sounds very nice. … So which Path of Champions are you on? How far advanced are you in the game? I’m totally hooked but I obviously haven’t gotten very far. I’m going to try Vi’s first adventure tonight, maybe after I watch Arcane episode 1.

I’m going to watch episode 1 with my kid tonight.

Depending on age, that might or might not be a great idea. My teens loved it, but it’s pretty intense for littles.

So which Path of Champions are you on? How far advanced are you in the game?

Oh, I’ve been playing since the launch. Mostly just a couple of games a day, more when the lab is fun. For a while that was pretty rare, but once they launched the roguelike alternate play modes, I’ve had a ton of fun with those.

I ran through the intro for all five of the champions that have one. You can play others, but they don’t have the easy-mode intro with the comic-cutscenes yet, so I’ll probably wait and see if they add those later. And I’ve gotten most of them past the second or third boss. Just got Jayce past Zed tonight, maybe this week I’ll manage to get someone past Nautilus.

Not to worry, my kid is an adult. In fact both adult kids watched with me, and we all loved it. What beautiful artwork. The lighting is gorgeous, and the artists aren’t afraid to use bold color. Fun story and great animation too!

@ineffablebob I do enjoy the comic-cutscenes, so maybe I’ll wait for those too. Then again, Riot has been talking about a reset of the Paths after new features arrive early next year, so I might just keep going.

Do you play much PvP? I’ve never been one for ranked play, but I do sometimes enjoy limited formats, like Hearthstone’s Arena. I might dabble in that here. But I want to limit stress, and PvP stresses me a bit. :)

So I’m still enjoying this a lot. I play the PvE Paths of Champions almost exclusively. It’s a really great roguelike mode. My highest champion is Caitlyn, at level 12; but she’s having trouble with the run that gives all enemy units Tough. Suddenly her traps are defanged, at least until they start appearing in clumps at the end of a match. But she has a relic that buffs her spells, so that will help.

Not to worry, my kid is an adult.

Do we not have a word that captures this without having to say ‘my adult kid’? I frequently have the same issue when I refer to doing things with my kids, and then having to explain they are 20+ and not 5. Not picking on John or anything, I was just happy to see someone else having to explain, but then realizing it is weird we don’t have a way to easily distinguish.

The word “kid” implies a minor. Son or Daughter is more age ambiguous.

My highest champion is Caitlyn, at level 12; but she’s having trouble with the run that gives all enemy units Tough. Suddenly her traps are defanged, at least until they start appearing in clumps at the end of a match.

Yep, that’s Nautilus as the end boss of that one, and it’s a royal pain. Easily the hardest section in my opinion. I’ve made it through twice, once with Caitlyn and once with Jayce. In both cases I only managed it because I was offered a “kill a unit” card along the way, and got lucky enough to draw it to kill Nautilus before he murdered me.

Doh, you are of course right. Old habits die hard.

Ah, so that’s the dreaded Nautilus, lol. I haven’t made it to the final boss yet, so I didn’t absorb his identity. I actually switched over to Miss Fortune for a change of pace. She’s fun, and she breezed through Gangplank, a level that has given me fits in the past. I enjoy playing Caitlyn most of all, though. The traps are so fun. :)

I’m still playing this every day – the Path of Champions, almost exclusively, unless I need to play a constructed deck against the AI for a quest. Caitlyn is still stuck on the Nautilus level. Ekko is there too, I think. Vi can’t get past the level just before it – the one with Shadows and returns. (Zed’s level, I think?) Caitlyn can manage this level because her traps pick off the AI’s seemingly endless hordes. Vi doesn’t have that trick. She’s level 12 or 13 now. I imagine she’ll need several more levels to get by this roadblock.

Vi was my problem child as well, took forever to get past both Zed and Nautilus. Take heart, though…the last boss, Victor, is comparatively straightforward! I think my eventual success with her in both cases involved getting the -1 cost item. One turn earlier can make a huge difference in those crazy boss fights. The power that summons a copy of her is really good, too

The only one of the original five remaining for me is Ecco, who I haven’t played nearly as much. I’ve also taken time to run Pyke through the whole thing, as he’s one of my favorite heroes for the Path format. Doesn’t need too much help to be hitting really hard, and once he levels he generally wins the game by himself.

I just beat Nautilus on the first try with Yasuo! I’ve really enjoyed playing Yasuo. He’s all about stuns and recalls, and he helped me grok the usefulness of the recall mechanic in particular. He synergizes well with a number of other champions, and his voice acting is fun too. Anyway, I guess it’s on to Victor now.

I’m still loving this game, playing every day for an hour or so at least. I’ve been playing for weeks, but I still have never played against a human. Paths of Champions (Poc) provides all the challenge I need for now. I do play non-PoC games vs the AI occasionally in order to fulfill a quest. But mostly it’s PoC for me. Once I know the game better, I may dip my toe into an Expedition, and eventually I’m sure I’ll try Ranked too. But for now, all I wanna do is try new champions in PoC.