Created by the Tokyo-based Japanese development studio Artdink and celebrating its 35th anniversary in 2021, the venerable A-Train series is the studio’s longest ongoing video game franchise. Over time the series has steadily evolved over the years into a unique blend of railway management, urban development, and business simulation. The series caters to a wide variety of people from densha otaku (train fanatics) through to individuals who enjoy the city development aspects.

Beginning with the release of A-Train III, the series has been heavily inspired by the private business model purportedly pioneered by Ichizo Kobayashi (1873-1957), founder of what is today the modern Hankyu Hanshin Toho group. This distinctly Japanese integrated model of business operations predominantly focuses on three symbiotic elements. These three core pillars are the transportation of people and goods, the strategic buying and selling of real-estate, and the careful placement and management of subsidiary businesses near stations. All with a healthy dose of stock market action thrown in on the side for good measure. 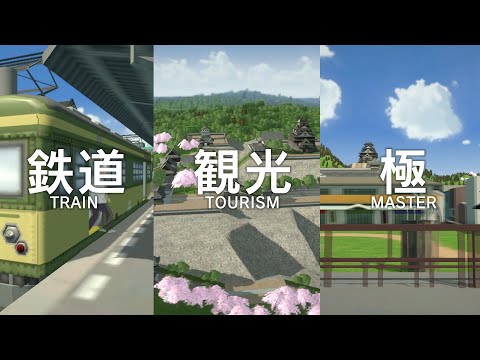 Spanning over nine mainline entries on personal computers and several spin-off projects, the A-Train series has had a turbulent relationship with localised releases outside of Japan. Maxis and Ocean are credited with first introducing the series to most people with the localised release of A-Train III in 1992, most commonly known as just A-Train in Europe and North America. This was later followed up by Maxis publishing A-Train on the original Playstation in 1996, which is actually a localised release of A-Train IV rather than a port of A-Train III. While several subsequent A-Train games have received localised western releases via third-party publishers such as Degica Games, unfortunately many entries in the series such as A-Train 7 only ever saw the light of day inside Japan.

At the time of writing, A-Train 9 is the latest mainline entry in the A-Train series. First released in Japan in 2010, the game has subsequently gone on to receive four expansions, culminating in Version 5.0 - Final Edition. The most up-to-date English release of A-Train 9 is Version 4.0 localised by Degica Games and available on Steam. Unfortunately, Degica Games never localised Version 5.0 and consequently it’s currently lacking an English language release.

For the moment, you can read my in-detail thoughts about A-Train 9 over here:

A-Train is a curious blend of genres, heavily influenced by the role private railway corporations played in the development of rail integrated communities throughout Japan. The most recent mainline entries, such as A-Train 9, are at least one part transport game and one part urban development game. As well as the expected transportation of people and goods you can and will branch out into the real estate market, managing subsidiaries, and the stock market. Essentially, you are the primary drive… 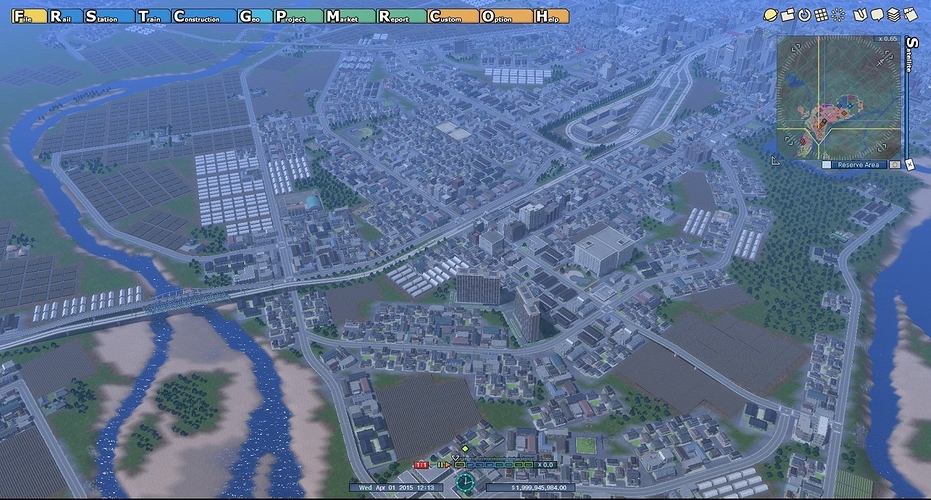 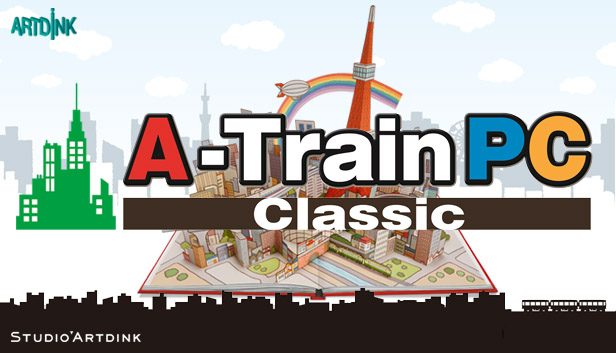 A-Train PC Classic is, as the name might imply, the PC release of the predominantly 2D sprite-based A-Train 3D for the Nintendo 3DS. The redrawn 2D sprites, display higher resolution, improved performance, and implementation of mouse and keyboard controls faithfully bringing a wonderful A-Train game from the 3DS to the PC audience. Including all the localised original and previously unlocalised Japanese-exclusive DLC scenarios, A-Train PC Classic also includes three new unique scenarios and Steam Workshop support for downloading and sharing user-created scenarios.

Following on from everything that made A-Train DS a cult classic on the Nintendo DS, A-Train 3D // A-Train PC Classic greatly improves on the core gameplay. Additions such as a new epoch system and five new resource types to transport and trade (e.g., coal and oil) bring a whole new dimension to the gameplay. Research new rolling stock as the technology becomes available and witness new building types appear as the years progress, culminating in massive glass skyscrappers and residential apartment blocks.

A-Train PC Classic offers a wide-variety of objective-based campaign scenarios with a choice between three tailored difficulty levels. Plus there is the option of Free Mode (sandbox) for those whom wish to play without restrictions. Whether you are looking for a real challenge of your management skills or just craving something a bit more guided and goal-driven than your typical freeform sandbox, there is a suitable difficulty level for almost anyone. 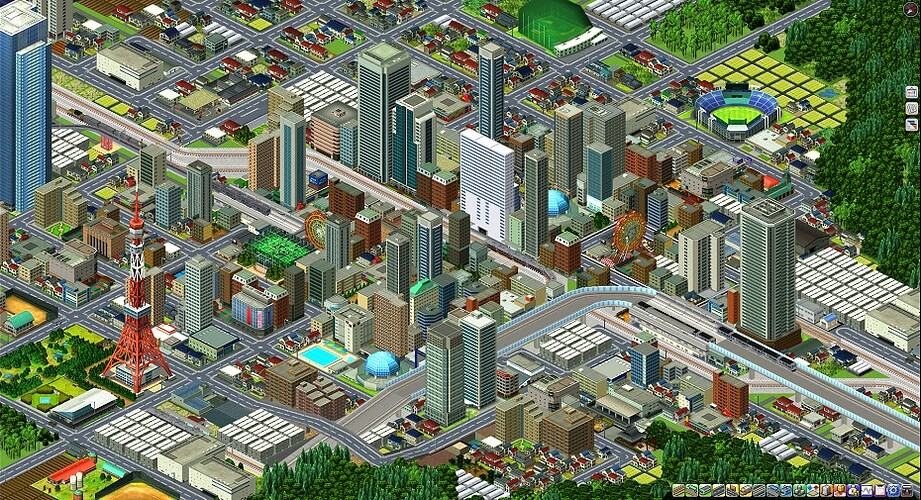 A-Train: All Aboard! Tourism is, at the time of writing, the latest entry in the venerable series and released worldwide March 12th, 2021 for the Nintendo Switch and December 8th, 2021 for Windows PC (Steam). Once again directed by Masaki Iizuka, the game iterates on the foundations establish by A-Train DS and A-Train 3D // A-Train PC Classic. Adding new features and improving on existing ones too, such as the addition of seaborne transportation options (ferries) and an expanded construction mode.

Similar to previous installments directed by Masaki Iizuka, A-Train: All Aboard! Tourism offers a wide-variety of campaign scenarios, the ability to share and download user-created scenarios, a choice between three tailored difficulty levels. Plus Free Mode (sandbox) returns for those whom wish to play without restrictions. Helpfully, the game even comes with a free demo on the Nintendo eShop that lets you play the first scenario, tutorial included, for up to a year of in-game time.

An important theme of A-Train: All Aboard! Tourism, as might be evident from the game title, is the addition of special tourist attractions and routes. Several of the game’s scenarios incorporate this new element into their scenario objectives to offer an even broader range of scenario objectives compared to A-Train 3D // A-Train PC Classic. By constructing transportation links to other nearby regions at the borders of the map and transporting the flow of tourists to and from designated tourist attractions, there are now even more ways to generate revenue transporting people by train, bus, plane or ferry. 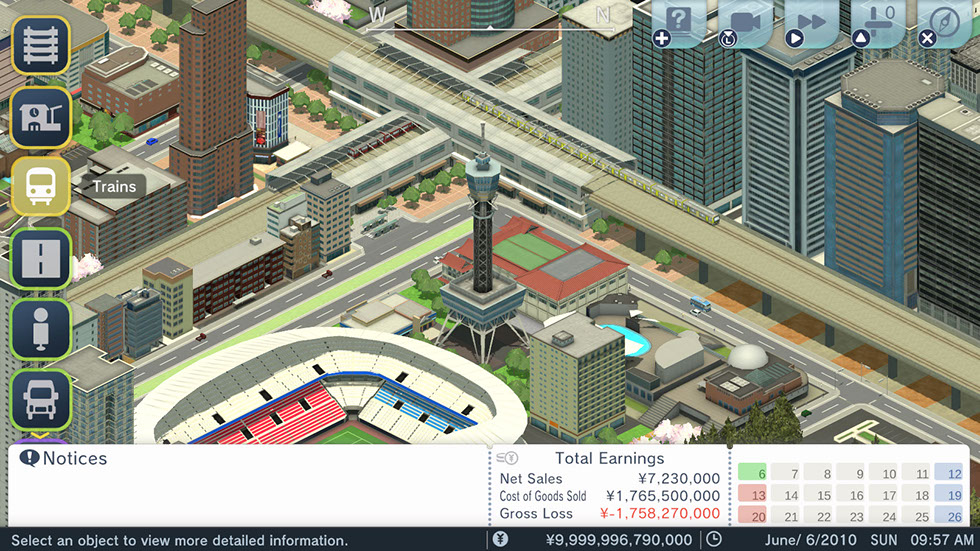 Anything made by the people who did Carnage Heart has to at least be worth a look. I’ve never heard of A-Train before, so thanks for making this thread.

Anything made by the people who did Carnage Heart has to at least be worth a look.

Funny coincidence, the game director for Carnage Heart happened to be Masaki Iizuka. Thus, the A-Train DS, A-Train 3D // A-Train PC Classic, and A-Train: All Aboard! Tourism subset of the series might be the most interesting in that regard. Guy really knows how to make some surprisingly deep games apparently.

I’m interested in A-Train PC Classic but it’s definitely got that Classic Japanese Pricing going on, so it’s gotta wait.

So how does A-Train play on the 3DS? Usually these are games that are tricky to play without a mouse.

So how does A-Train play on the 3DS? Usually these are games that are tricky to play without a mouse.

I imagine that depends on how feel about using the stylus a lot. From what I have seen of 3DS gameplay footage it’s a heavily stylus optimised control scheme, making full use of the touch screen capabilities. Which at least for the people who recorded themselves playing the game seemed to work decently but obviously YMMV.

I don’t know about the 3DS, but on the DS it was mostly stylus based with the controls used as shortcuts and it was incredible. Definitely one of the best stylus based game of the console.

I’ve been fascinated by this series but have no idea to begin. I have a 3DS, Switch and PC, which would y’all recommend I dive in with?

You can try the demo of the switch version: it felt clunky to me. Given my experience with the DS one, I d recommend the 3DS one.

I think a friend of mine had one of those games, I remember him playing it. I was 16.

I’ve been fascinated by this series but have no idea to begin. I have a 3DS, Switch and PC, which would y’all recommend I dive in with?

Outside of trying the free A-Train: All Aboard! Tourism demo on the Switch, which won’t fully showcase everything the games have to offer due to it being limited to the first tutorial scenario. In terms of price, I would say A-Train 3D for the 3DS, since it regularly goes for 20 USD on the Nintendo eShop, followed by A-Train PC Classic, when it’s on sale at Steam or Humble Bundle.

Though, content wise A-Train PC Classic on sale is the winner if you get hooked like I did. There’s 23 official campaign scenarios that will each take a few to several hours to complete. So, you can easily spend over 100 hours just completing everything on the Easy difficulty. Boy, did I sink a lot of hours into that game on Steam.

. This distinctly Japanese integrated model of business operations predominantly focuses on three symbiotic elements. These three core pillars are the transportation of people and goods, the strategic buying and selling of real-estate, and the careful placement and management of subsidiary businesses near stations. All with a healthy dose of stock market action thrown in on the side for good measure.

This is all my jam.

I had no idea this was a series!

As it sounds like you are a series regular, how does this stack to previous entries, and how would you compare to a, say, Railroad Tycoon 3?

The series has been a bit all over the place, in terms of genre.
I only played a bit of the first one, which made no sense to me at the time given I didn’t know how to play such games, a console version which played like a game about setting up proper schedules for trains, and A-Train 8 or 9, I don’t recall which one, which felt like a virtual miniature toys box.

In the DS one (the one I think A-Train PC Classic (sic) is based upon), although you can lay tracks, it’s not really a transport tycoon game and more of an economic empire origin story simulation. The whole concept is that of a city builder with less control over the city. It’s not an ant farm, though, as the game is quite challenging. The scenarios are puzzle-like in that they have very clear, and often difficult, objectives.
It’s definitely the game of the series that clicked with me, but I’m someone who really doesn’t like city builders at all, so I don’t know what that tells about the game!

I imagine that depends on how feel about using the stylus a lot. From what I have seen of 3DS gameplay footage it’s a heavily stylus optimised control scheme, making full use of the touch screen capabilities. Which at least for the people who recorded themselves playing the game seemed to work decently but obviously YMMV.

I guess that makes sense! I’m remembering that I played the Anno games on DS. They’re not the same games as the PC versions, but they are still detailed building-on-a-map games, and they used the stylus predominantly to good effect.

The Switch touchscreen doesn’t feel as good as a DS, and I wonder why that is. Lack of a stylus? Using big fingers doesn’t help probably. But it feels heavy overall.
I miss a Switch stylus. And that way, we would have gotten Picross 3D Switch :(

I think I’ll try the 3DS version. Thanks y’all.

Glad to see others appreciating this series.

I’ve put about a dozen hours into the Switch version and really like it. Feel like I’ve only barely scratched the surface though. The controls feel clunky at first, but you get through that before too long.

Do you have a preferred control scheme?

I’ll confess I want so much to love that version.