Now just need one of those three to be gray or yellow with 1 attack, steel

Steam Next Fest is currently active, with demos for lots of upcoming indie games.
Currently downloading a bunch that caught my interest.

Short impressions from the ones I tried already:

Against the Storm
Good colony builder already available on Epic. For me personally the “roguelike city builder” aspects are too thin and it quickly becomes boring building basically the same colony again and again. Strong theme and mechanically very sound.

Aquatico
Underwater colony builder. Despite the uncommon setting this felt very generic and somewhat soulless to me.

Floodland
Post apocalypse colony builder. Similar to other recent post-apoc colony builders (Surviving the Aftermath, Endzone). It has some charm though and a couple of mechanical additions that might elevate the final product. Decent.
Short demo.

Diluvian Winds
Turn based small outpost builder and resource manager. You are the lighthouse keeper at a resting station for travellers who in return for food and shelter work for you. If you fulfil their request or after a certain time they move on. Travellers have various traits and are different animals with individual bonuses (otters are better at fishing etc).
I really liked this one. Resources and work are reasonably scarce to make decisions interesting. The build/animals/weather provide a comfortably wide range of options. The demo is victory point based (fulfilled requests), dunno what the goal structure for the full game is.

Flat Eye
“Station builder” with a focus on story. The narrative themes are near future technology, impact of technology, AI.
A strong focus on decisions and outcomes in the story parts. The management and building aspect is very light in comparison in the demo.
Pretty good, worth keeping an eye on.

The Pale Beyond
Polar expedition choose your own adventure, with a good infusion of crew and resource management. Lovingly crafted and quite atmospheric. Promising.

Potionomics
Best described by its tags: Capitalism, Deck Building, Dating Sim. A modern Recettear with a crafting system and without the annoying dungeon crawl. Charming even though it occasionally tries a bit too hard. Recommended.

And the steam links for them, which I didn’t want to clutter the very short impressions with. In rough order of how much I liked them:

One of The interesting things about wildfrost is that it doesn’t have a mana system. Instead, every unit (friendly or otherwise) performs some sort of action every X turns. Each card you play reduces the cooldown of every active unit. It’s quite clever. 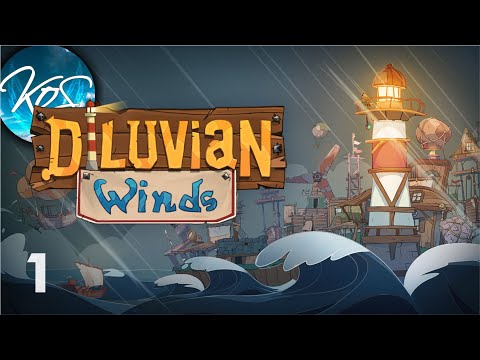 The Pale Beyond looks very interesting! I just downloaded the demo and will take it for a spin. 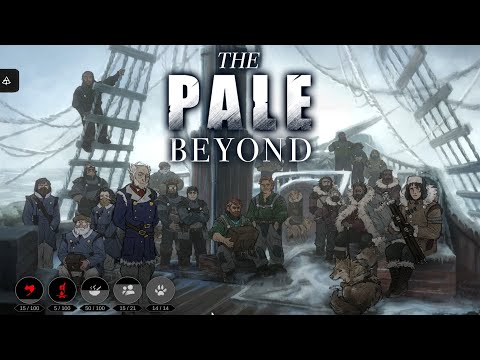 It’s free - so no questions asked even if it feels like a beta:

Thanks, Therlun. Potionomics looked really appealing, so I appreciate the impressions. And I totally missed Diluvian Winds, and it looks great!

Played a bit of The Pale Beyond. It’s atmospheric, but I was getting the impression that the story has been determined, and you are just moving around the ship clicking the one option to go on. There are choices, but pretty much blind choices. Then I got to a point where I could not find a way to continue the story, bringing back bad memories of old RPGs where most of your time was spent trying to figure out how to go on.

The game opens up after the initial introductions on the ship with more management and decisions. The dialogue trees also have more impact in relations and outcomes.

The action(s) that progress the week are always yellow. Maybe you need to zoom out a bit on a screen to see them.

Another interesting demo available right now is Inkulinati. The art style is off the charts (isn’t that what you kids say??):

Inkulinati has been on my wish list for a while. Time to check out the demo.

Another interesting demo available right now is Inkulinati. The art style is off the charts (isn’t that what you kids say??):

I don’t know what the kids say but the art style is off the charts :D Got the demo installed (among many others!) but not had chance to take a dip yet. 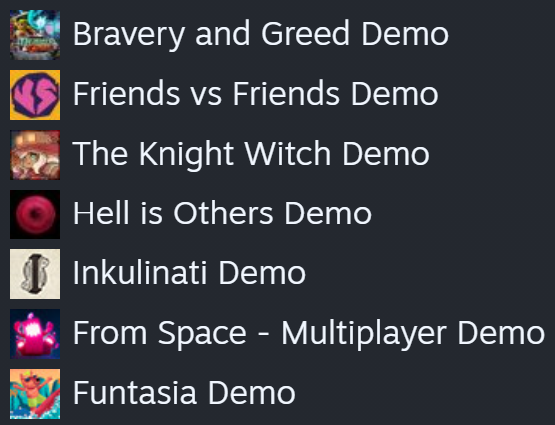 I’m tempted by Skald and Dredge as well. Will try and report back!

I’ve been enjoying some demos.

Flat Eye - dystopian Icelandic service station management sim. Hard to say how good this actually is, because the demo is very short and I’m so in love with the art style that it overwhelms my critical faculties. Promising, I guess is how Id put it, but the hints at the larger story make me wonder about replayability.

Dredge - Sunless Seas set in a fictional New England. Upgrade the boat, learn about the spooky things beneath the waves, sail around, fish. Enjoyed my time with it.

Zero Sievert - This is a pixelated, top-down single player Escape from Tarkov with bits of STALKER thrown in. Got its hooks in me immediately, even though it’s fussy about rebinding keys, which is normally an instant no-play for a lefty like me. Mod weapons, craft food, die and lose everything you found on the run because you tried to loot one more thing. Will buy the minute it’s available. Scratches an itch I didn’t know I had.

Which brings me to
Superfuse - Action RPG in which keys cannot be rebound. QWERTY or die. Uninstalled after 2 minutes. Might be ok, but there are a lot of action RPGS in the NextFest.

Potionomics
Best described by its tags: Capitalism, Deck Building, Dating Sim. A modern Recettear with a crafting system and without the annoying dungeon crawl. Charming even though it occasionally tries a bit too hard. Recommended.

Downloaded the demo to try it out. I like the look/feel of it but the demo is just terrible. The load screens moving between areas or tasks are out of hand (5-10 seconds for me with a note like ‘Buy this game!’ basically) & after you’re told to ‘Travel’, you’re just stuck going between the three vendors with no way to go back to your shop. Apparently you have to buy something from the ingredient vendor and give it as a gift to someone in order to advance but it never mentions this at all. Just leaves you hanging with nowhere to go. I think they’re going to lose potential customers just on how bad the demo is.

Apparently you have to buy something from the ingredient vendor and give it as a gift to someone in order to advance but it never mentions this at all.

It kind of suggests it by saying you CAN do that, but yeah, I’m sure a lot of people will struggle with that. The deckbuilding haggle system is a neat idea, so that’s a shame

King of the Castle is a social storytelling game. One player is the king, making decisions for his kingdom, and his friends (on Twitch or in a browser, apparently) are the council that votes on whether he actually gets to do what he wants.

Which brings me to
Superfuse - Action RPG in which keys cannot be rebound. QWERTY or die. Uninstalled after 2 minutes. Might be ok, but there are a lot of action RPGS in the NextFest.

Was just watching some video. Superfuse looks absolutely incredible. Futuristic, comic-styled aRPG with a modular upgrade system for tailoring skills with “fuses” (on a hex grid, so much less restrictive than something like PoE gems).

No release date yet, but will be watching for this one.