Ok, I’ve managed to get 4 bike parts together, is it worth saving for the Pacebreaker (6 parts / 3rd bike), or is the Trailblazer (4 parts / 2nd bike) already a worthwhile / essential investment?

Seriously, why didn’t/aren’t more people play(ing) this? It’s amazing and on Game Pass (console and PC).

Would be nice if more people put up videos of their runs so I could figure out what shortcuts they’re taking, though. I’m trying in vain to hit the 1m30s time for the first trail of the first mountain (I think) and just getting nowhere. If I try the really fast bike (the Pacebreaker) I can’t ride it that fast anyway or I wipe out, and it doesn’t like more than very modest drops. The Boar is better about that but it’s hard to control its acceleration.

I liked it, but it was really stressful.

It is a German dev, right? I thought I saw something about Brandenburg on one of the splash screens.

I like this game a lot but I find the unlock progression system a bit annoying. There’s a zen like element to the game but that is counter to the time trial unlock system, I kind of wish there was a tourist mode that just unlocked all the trails/mountains from the jump.

Heck yeah, I love your enthusiasm! I loved it! But yes, eventually it got too hard for me. I should try to get into it again, maybe my brain has gotten better at it in the intervening years. (Doubtful!)

By the way, if you’re on my friends list, you should be able to view my times and maybe even watch my ghosts? I forgot if this game had that. I think it did. Maybe?

Yeah, they are located in Berlin.

Don’t know about the ghosts, but there are leaderboards. Currently playing (and furthest along in) the Game Pass version and I’m FreshQu33blets on there, but I also liked it enough that I bought the Steam version with the DLC during the recent sale. What’s your version?

Game Pass version. I didn’t know DLC was out for the game! Cool.

So what’s your gamertag (assuming they’re still calling it that)?

I just gave it a shot and I presume the feel improves as you unlock the bikes? Because the starter felt totally disconnected from the floor. Like it’s drawn on the floor, but isn’t interacting with it in anyway, instead just floating about on top.

Also, the camera might be the worst one in any racing game.

I felt that the physics felt grounded, so not sure what to say about that. And the camera is the camera, you just have to work with it. I got used to it.

I haven’t played this in ages so I fired it up for a couple of runs. I actually beat my personal best on the first course I rode. I looked at the leaderboard and I don’t fare too well on my friend list. On some courses I think I’m missing some serious short cuts based on the time discrepancies. I forgot how awkward the controls were and how often I turn in the opposite direction I intend to. It doesn’t matter which control scheme I use, I do it with either. The game also wants to trick you into thinking it is a chill leisurely game, but I gotta say it’s more stressful than most things I play. I do like that most sections are fairly short so the cost of failure isn’t too high.

I felt that the physics felt grounded, so not sure what to say about that. And the camera is the camera, you just have to work with it. I got used to it.

I also felt that way about the physics, myself, i.e. that they were fine.

I guess it would be cool if there were a mod that would let you freeze the action and move the camera around to examine the course you’re on, to scope out shortcuts and such. When you’re going faster the camera does zoom out thank goodness.

Surprised to see a new patch for this today. Updating now. 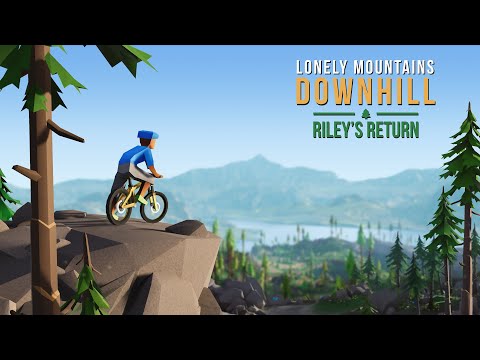 I launched the game and noticed that I’m beating you in some trails, but you’re beating me in others. But almost always, you’re on a different bike than me. I finished Beginner/Normal challenges, and only started the Expert challenges. Is that how you unlock anything other than the starter bike? I didn’t find anywhere in the menus how to unlock other bikes.

There is the mysterious paint job screen, which has an “unlock” option on the other bikes, but presumably that’s about Paint jobs. I didn’t want to waste “nuts” unlocking paint jobs on bikes that I haven’t unlocked yet. Or are the bikes confusingly unlocked through the Paint Job menu? Has that really been it the whole time?

Cool! I was beginning to burn out on this a bit, but I want to keep playing as well. A few days ago, purely by accident (a series of lucky falls), I found a weird shortcut on the second mountain (pretty sure) where I ended up going behind a big waterfall (it was unnerving because I couldn’t see), and it ended up shaving a number of seconds off my previous personal best for the segment.

You unlock the other bikes (in the “customize” menu) by beating the challenges that have “bike part” as a reward and collecting enough parts to unlock a new bike. BTW, almost always it’s important to take the expert challenges one at a time --you’ll find that by default more than one can be highlighted, so you need to select the ones you don’t want to do in this run and hit the “remove challenge” button (a Y on the Xbox controller IIRC). Some challenges require that you complete them on a particular bike, so unselecting those is critical if you want to do one of the other challenges and don’t have the required bike for one of the multiple challenges highlighted).

I recommend that you unlock the second bike in the list for sure, and the Boar at some point, and eventually the Geronimo (which is great for bigger drops). The third bike (the Pacebreaker, I think) is fast and agile, but is easy to overspeed on and is too fragile for anything but the mildest of drops. I’ve managed to unlock everything but the Javelin, which may be super fast but I would think would be really hard to control for the same reason. I have a hard enough time with the Pacebreaker.

Paint jobs/outfits are unlocked by completing certain challenges that call them out as a reward–you don’t spend parts (nuts) on them.

BTW, completing a trail (carefully) start to finish without crashing unlocks “night mode” which I still don’t actually know how to select.

So wow, you’re waaaaay ahead of me on the Expert challenges then, if you’ve already unlocked all those bikes!

Edit: Wait, so I just realized, you’re asking us questions about shortcuts despite being way ahead of me! How dare you Sir!

So wow, you’re waaaaay ahead of me on the Expert challenges then, if you’ve already unlocked all those bikes!

Yeah, I beat my head against the wall enough times (and looked at YT vids to find non-obvious shortcuts and all) to unlock those bikes. It takes a while. :-) The most heartbreaking thing is negotiating a particular segment perfectly and fast only to crash within sight of the checkpoint, grrr.

One thing I really wish the game had (and who knows, maybe on Steam it has a Workshop so someone has modded this in?) would be a way to repeat a segment you just finished but didn’t get a good time on. Currently the only alternative in this case is to restart the whole run, which sucks if you’ve gotten personal bests on all/most of the previous segments.