I didn’t know anything about this until I saw a thread over on Era about it, but this looks really cool.

A classic tactical turn-based RPG inspired by Fire Emblem with the fantasy world of gods, spellcraft, and turmoil. 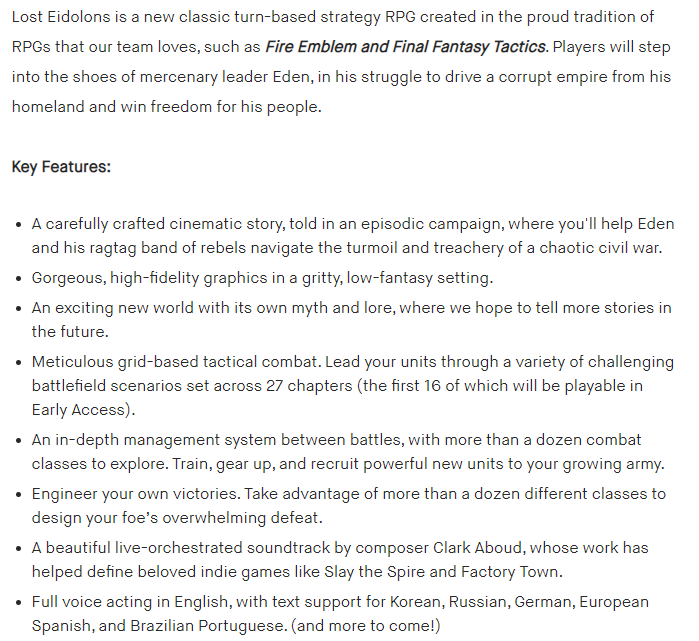 Take a look at the Kickstarter page for all the info you could want - but if you like Fire Emblem or games like it (the first I played was called Shining Force but I also consider this to be tightly adjacent to classics such as Final Fantasy Tactics and/or Ogre Battle) this should be any easy $25 to part with.

I decided to try the game out. I have played for about 30 - 40 minutes and I can tell you it is very story driven. Most of the time I have played was in cut scenes and/or dialogue. To be fair the game is trying to establish the story and introduce the player to the cast of characters so I can give it a break in this regard and you can skip scenes. But it is a lot of dialogue vs combat tutorial (I would say a bit too much).

I was annoyed a bit at the first combat scene. I really hate when they start you out on - you are outnumbered scenario and you have to get over the safe zone line - and then have so many enemies that have to move versus your few units. Why do they do this? It is just annoying. The other thing is a bit of a bait and switch in that you have more abilities to use in the first taste of combat that disappear when you really start the game.

I do think the voice acting is very well done for an independent effort. I did not have any text to sift through as everything was voiced (though maybe this lessens a bit as the game progresses).

There is no regular save function where you can create as many save as you want BUT you can stop in the middle of a battle and return to it. There is also an UNDO ability during combat for each move which makes up for no multiple saves.

It seems like you can swap your gear out as you fight. I haven’t tried it yet but from what I can discern different weapons are good against different armor so carrying different weapons might become a thing as I learn more. There also is magic but I have not tried that yet.

The story is ok but there are some leaps in logic (but I think I am a bit sensitive to story logic lately having been annoyed at Rings of Power’s internal logic).

I think I will keep it as it is very similar to Fire Emblem Three Houses and I can play it a little bit at a time.

Any further thoughts on this? Steam keeps suggesting it to me based on the games I’ve bought/played. I do like turn based games including strategy, tactics and RPG. However the Steam reviews are a bit mixed and Metacritic gives it a 75, which is, well that could go either way. I read some of the metacritic reviews and that left me feeling inconclusive.

Any feedback from the hivemind?

I’m also curious about it. Based on the reviews I’ve read, it seems solid and I’m pretty sure it would be up my alley as a fan of the genre.

But every time I look at it, I remember that I’m still in the middle of Symphony of War, Triangle Strategy, and Tactics Ogre, I haven’t yet started Knight’s Tale or Gloomhaven, and then we’ve got Midnight Suns and Fire Emblem Engage dropping soon.

It’s been a weirdly stacked year for TRPGs (in addition to the above, I also have my eye on Mario + Rabbids 2, DioField Chronicles, and Vestaria Saga 2), and I haven’t seen anything that would vault this to the top of the priority list for my time just yet. But definitely open to hearing otherwise!