I’m thinking their new patch might be a little buggy. 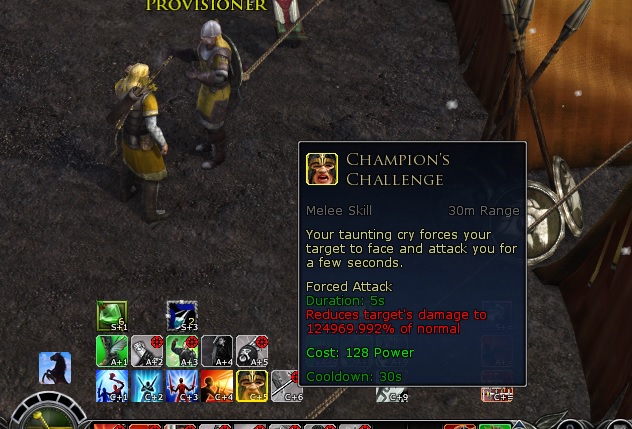 My computer keeps shutting off after 3-4 minutes of playing, but when I turn it back on, it’s still connected to the game and all of my windows are still active. Wonder if it’s a heat issue and auto-sleep mode or something. Still, not what I expected from a 1yr old gaming laptop for a 15 year old game. If I can’t figure out the cause, the game’s a no go.

You tried both clients? 32 and 64b any no difference?

No difference between clients.

If its a laptop could be the fan area clogged with dust etc? Had that happen with a laptop I used. Had to use compressed air to get it clean, or a vacuum cleaner might work.

Try running some cpu/computer monitor in the background with logging to see if it is a temperature issue.

The lotro client graphics options also have some troubleshooting settings that might assist.

Wow. That might be the best storage solution upgrade since the premium wallet. How do you get it? VIP-only?

Wow. That might be the best storage solution upgrade since the premium wallet. How do you get it? VIP-only?

VIPs recently got a gift where they could choose a small one for free, choosing between one for crafting, tasks or essences. The task or essence ones are not for sale yet, they were a limited-time offer.

Another nice thing about them is that you can move them around within your account. One transfer moves all the stuff to another character.

Yep, I goofed and took the small task carryall, not realizing there was no other way to get a larger one for the brazillion task items.

Oooo, 2000? Is that all? I may buy one of those suckers. I was saving up my points for the last couple of quest packs, but now that they’re all free, I think I’d rather have that.

I dunno why but LOTRO has always made more storage solutions difficult to come by/and or really expensive while they throw a metric-assload of items at you. (weapons, potions, task items, crafting, cosmetic, loot boxes, rep tokens, instance tokens, skirmish tokens, festival tokens, and about a million other such tokens)

Pretty sure you answered your own question there.

I’m thinking their new patch might be a little buggy.

Have you tested the effect of the action? Does it actually increase someone’s damage by 125000%?

They are aware of the issue and put in a quick fix to block the effect, though the numbers will still display incorrectly.

Redeemed the LOTROFREEQUESTS code last night. WOW! There have been a couple of new quest packs released since I last calculated what I still needed to purchase. The code granted me 10 quest packs and 2 region packs that I still needed, saving me 11940 LOTRO points retail, or close to 9000 LOTRO points even if I’d waited for each area to go on sale.

As someone who has played on and off for the full 12 years LOTRO has been around, I always kicked myself for not doing the Lifetime sub way back at the start when it was available. I’ve spent plenty of money over the years on the expansions and on Turbine Point purchases to cash in for new regions or enhancements. In recent years I’ve gone back to “close out” old zones including all their deeds, doing so all the way through Moria and into Lothlorien/Mirkwood. I earned a ton of LOTRO points from doing that and used them to purchase the next several regions beyond, and had mapped out where I needed to go next and the deeds I would need to grind to continue down that path.

Now, having all of these regions gifted to me by Standing Stone Games after 12 years of playing LOTRO…I feel like a real VIP. No more regrets about not buying the Lifetime sub or worries about grinding deeds, just a wide open game ready to be explored and enjoyed. I now own more content that I will likely ever even play through at this point thanks to the generosity of SSG, but that won’t stop me from buying the next expansion down the road to express my gratitude for what is easily my favorite MMORPG of all time.

I think LOTRO has been going for closer to 14 years. I say this because I logged in yesterday and found I had a gift for playing for 13 years. It is a cosmetic pet pig who hauls around a cute little wagon full of fireworks that shoot skyward from time to time.

I seem to recall the game had already been out for 9 months or so before I enlisted.

LOTRO celebrated its 13th birthday a few weeks ago. Launch from beta was April 24, 2007.

Taking my Warden through the Minas Morgul expansion content assuming that will go away at some point because it isn’t a quest pack.

I feel like my DPS is really low as it takes multiple gambit chains to take down a single common enemy. Like at least 6+ high damaging gambit chains with stacked bleeds. I feel it should only take 3 or 4 at most.

I can still take on around 3 enemies at once but I gotta go full life-tap, evasion, heal chain to keep my health up while slowly whittling them down with the occasional AOE light-damage blast.

And I have arrived 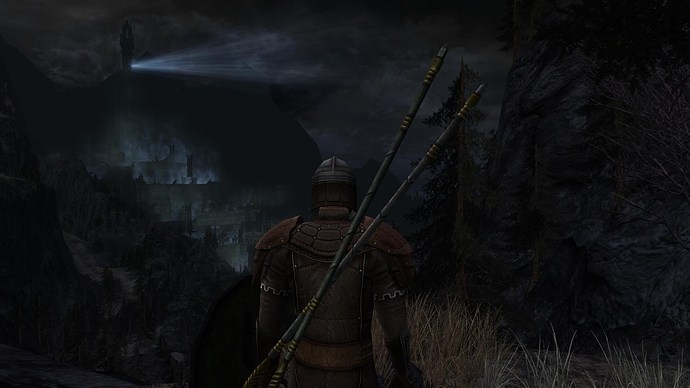 That place looks so nice.

Really crisp picture, even if it is blurred. I kinda like this “sort of pixelated” look.