One thing LOTRO does extremely well, is locations, and vast landscapes. Everything in other MMO’s seems much closer together, and lacks that large, open, vast world feel, that LOTRO does so well.

Back in the day (i.e. like 13 years ago), I organized a guild marathon, foot travel only, from–I don’t remember–northern Angmar to Lothlorien through Moria. It took over an hour to make the trip.

If only the first 60 levels weren’t so boring, and if only it didn’t have forced grouping.

I heard after the first 60 levels it gets really good!

If only the first 60 levels weren’t so boring, and if only it didn’t have forced grouping.

I’m not sure if this is sarcasm or if you just haven’t played in a really long time. Assuming it is the latter : The first 60+ levels, from The Shire all the way through Moria and beyond, have been retooled to make them easily soloable. Even the Book content, the main questline that progresses you through the story, has been changed so that you can solo what used to be forced-grouping encounters. There is also so much content among those familiar locations and landscapes that it is anything but boring for the first 60+ levels.

I recommend everyone take advantage of the LOTROQUESTS2021 code to nab all of the free content and NOT USE the powerup you can purchase to whisk you straight to the higher levels. With all of the content, atmosphere and wonder of the Shadows of Angmar, Mines of Moria, Mirkwood and beyond opened up to everyone for free, it is well worth the journey to experience it all.

I’m not sure if this is sarcasm or if you just haven’t played in a really long time. Assuming it is the latter : The first 60+ levels, from The Shire all the way through Moria and beyond, have been retooled to make them easily soloable. Even the Book content, the main questline that progresses you through the story, has been changed so that you can solo what used to be forced-grouping encounters. There is also so much content among those familiar locations and landscapes that it is anything but boring for the first 60+ levels.

Sorry if that wasn’t clear , but it wasn’t sarcasm, sadly, I’ve tried over the years to get through the levels, and I think the last time I tried, which was…5 months or so ago, I stalled around level 37ish or something like that. I had to do the dungeons though, but then again, that could be me just not understand how it worked solo. I just stall out everytime, because its the same mindless quests I do, i the same few enviroments - or so it felt to me.

LOTRO is far more my speed, which is of course a personal preference, but I love the feeling of the vastness of the world here :-)

EDIT: As for the first 60 levels being boring, I was talking about FF14 :-D

This is such a good deal. I picked them up. My gaming buddies and I am about to descend into Moria. :-)

One thing LOTRO does extremely well, is locations, and vast landscapes. Everything in other MMO’s seems much closer together, and lacks that large, open, vast world feel, that LOTRO does so well.

I wouldn’t know since I haven’t played many MMOs extensively outside of UO and LOTRO. But I think the entire LOTRO map might be one of the biggest in all of gamedom. Each individual area/zone map is already quite large, but when you stitch them all together it is freakin’ massive taking several real-time hours to traverse.

Fuck, you guys, pulling me back in. Reinstalling.

By the time the janky launcher finishes, the urge may have passed :)

the urge may have passed :)

Yup, that has happened before. Only 10 more gig to go in the base install, then I get the launcher updates…

I used the code (LOTROQUESTS2021) and unlocked the new content added since the 2020 giveaway. Then I was going to pull the trigger on the 99-point Mordor quests, but I thought I would check the store first to see if the entire Mordor expansion was on sale. Now I am thoroughly confused…see below.

In years past, each expansion was available separately. It looks like sometime recently they moved away from that, and now only Minas Morgul, War of the Three Peaks and the newest expansion, Fate of Gundabad, are available to purchase as separate entities (I’m talking for actual dollars, not LOTRO points). Everything else, from Mordor on back, is lumped into something called the “LOTRO Expansion Trove!” that costs $59.99. While that is awesome for new players, it kinda leaves me in a bad spot, as all I really need is Mordor, I own everything else from the pack already.

My question becomes, if I pick up the Mordor Quest Pack in game for 99 LOTRO Points instead of purchasing Mordor through the $60 expansion collection, what do I NOT receive? I know the quest pack contains all 300+ quests, but does it also have the 100+ deeds? I know it does NOT contain the instance/raid clusters, but I’m not sure I care about those and I can buy them for points later on if need be. What about the Allegiance System? Is that baked into the base game now or do you have to own the Mordor Expansion to activate it? I do not believer Morder came with any new races or classes, correct?

One other question. This Starter Pack Thingy for $9.99. It says it gives your account the Riding Skill. Does that mean the basic “everyone can ride the slow horse” skill (which I already have), or is it the faster riding trait (which I do not)? It also contains the High Elf Race among other things, which probably makes it worth the $10 to me anyway.

I don’t mind throwing real cash at Standing Stones since I have not done so in a couple of years, so I may just wait and see if they put the Expansion Collection and Starter Pack on sale for the holidays like they often do, and then purchase them both.

If you buy Mordor you not only get the quests, but the epic black book epic quest line which is exclusive only to Mordor and continuous beyond it, all deeds, and the nice fast travel hub zone that pairs with the faction alliance quest that you choose. (only 1 Alliance quest line per character. I have already done Hobbit, Men, and Elf – yeah this means I leveled three separate character all the way to Mordor and beyond)

The Elf hub is probably the most convenience because it’s the smallest and most condensed. Men is also fine. Just the Gondor throne room. Hobbit, not so much. Dwarf is useful only because of the latter quest content. It gives you an early and useful fast travel option to the Lonely Mountain, but the hub is fucking huge, spread out, and easily the worst.

Also I already bought the Mordor expansion via the points store and have all that stuff. There is zero reason why this stuff would be separated. Absolutely none. Because it isn’t.

Awesome summary, thanks man! Looks like I will buy the 99 point Mordor package then. Maybe I’ll buy the Minas Morgul expansion for $$ if/when it goes on sale around the holidays, and the Starter Pack thing too, and then I’d have access to the High Elf and Stout Axe races and extra character slots. Not that I’ll ever be making new characters again at this point…but it’s still a way to support SSG.

The fast travel hub you choose also only has a 15 min cooldown which makes it pretty useful for classes that don’t have a lot of fast travel skills (Anything not Hunter/Warden). It has all the amenities outside of crafting. Not sure why they excluded that to be honest.

I was able to clear the Minas Morgul expansion with two characters during the “everything is open now due to the pandemic” period. It is still full points to buy now but I don’t have any characters that need to progress there so I can wait.

Thank you, I would have indeed forgotten. Strangely, they still have that client labeled as ‘beta.’

Looks like Fate of Gundabad is open for pre-orders now. Release date is Nov 10th.

Still entirely theoretical for me, since I’m still back in Mordor. 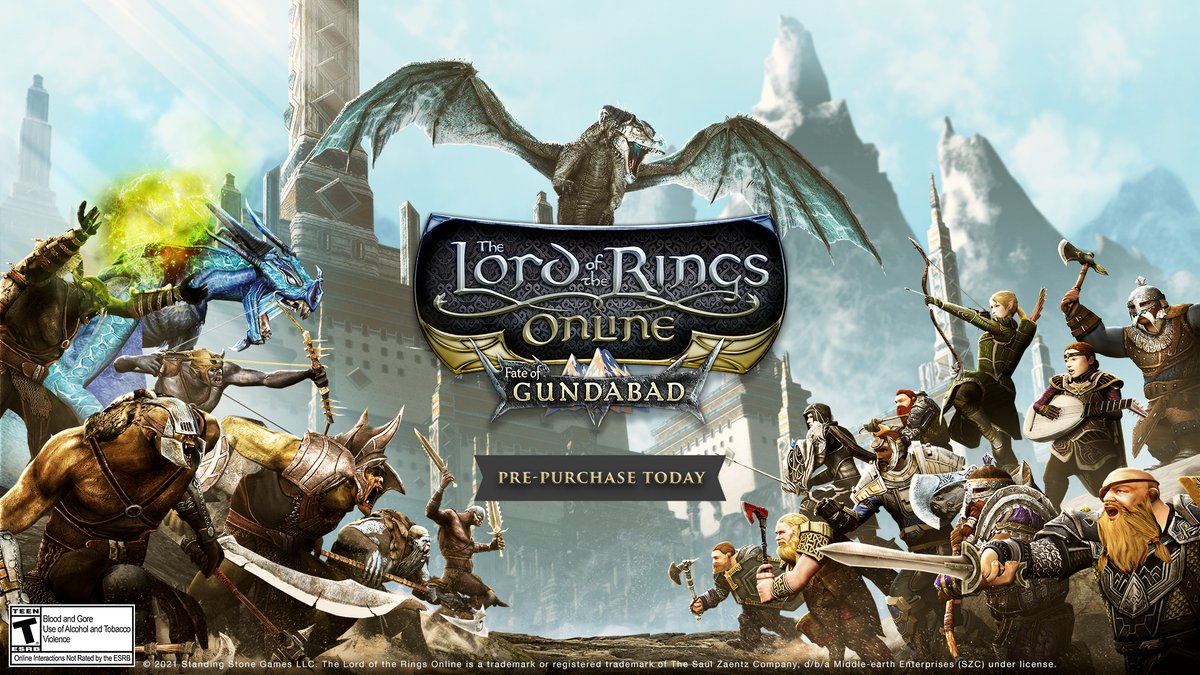 I have reinstalled and the game keeps crashing, perhaps I shouldn’t have installed through Steam.

I did the coupon and still have 50,000 points; no idea what to spend them on.

Steam is actually the preferred way to play (since it keeps track of hours played and adds it to your library, and you can use Steam Wallet to buy LOTRO points I believe), HOWEVER, the client that Steam installs is bugged. I’ve posted the workaround for this in this thread previously, but here is a quick summary:

Basically the Steam version of the installer is old and broken. It doesn’t handle the High Res Client and several other files needed for the complete install. The LOTRO website download is always the most up-to-date version, so when you install using that, then simply overwrite the busted Steam install with those files, everything works as it should.

How exactly do you have 50,000 points? That is hundreds of dollars worth of buying points from the LOTRO store.