EXCLUSIVE: Get Out writer-director Jordan Peele’s Monkeypaw Productions is teaming with J.J. Abrams’ Bad Robot and Warner Bros Television on Lovecraft Country, a one-hour drama that has…

[quote]
Lovecraft Country focuses on 25-year-old Atticus Black. After his father goes missing, Black joins up with his friend Letitia and his Uncle George to embark on a road trip across 1950s Jim Crow America to find him. This begins a struggle to survive and overcome both the racist terrors of white America and the malevolent spirits that could be ripped from a Lovecraft paperback. The goal is an anthological horror series that reclaims genre storytelling from the African-American perspective.

Peele brought the book to Bad Robot and enlisted Green.[/quote]

If you haven’t read it, Lovecraft Country is a thought-provoking read for anyone that’s struggled to reconcile H.P. Lovecraft’s monumental racism with a love for his horror mythos. 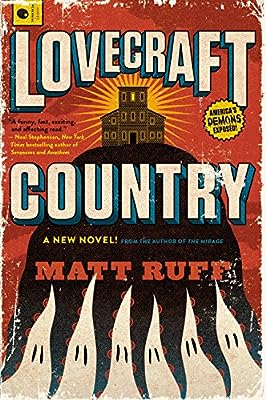 The critically acclaimed cult novelist makes visceral the terrors of life in Jim Crow America and its lingering effects in this brilliant and wondrous work of the imagination that melds historical fic ...

Just reading the premise, I’m utterly fascinated without knowing a single thing about the book. But now I wanna read that too!

Shut the ever loving fuck up.

This is so awesome. I thought the book was terrific.

I need to read the Public Works trilogy post haste.

Awesome. I need to check out this book but I’m very intrigued.

Never heard of it but it does sound really cool.

Yes, this looks great. Definitely picking this up.

I will say this warning: If you go into Lovercraft Country looking for a scholarly treatise on Lovercraft and his racism, you’re going to be disappointed. You’re also not really going to get the kind of cosmic horror that Lovecraft made his own. There aren’t a lot of investigators sitting around having discussions about eldritch terror, nor is there any sanity-blasting galactic monstrosities. The various book summaries don’t really do anyone much justice.

The best elevator pitch I can give is “Imagine if racists could use sorcery to get what they wanted.”

I’m going to predict that if this hits the screen, it’s going to lean hard in Peele’s direction and follow the Get Out blueprint. Some horror, but the weird tragicomic horror of racism mostly.

You’re also not really going to get the kind of cosmic horror that Lovecraft made his own.

In that case I’ll skip the book and wait for the show.

It is a great book, well worth reading. This pretty much seems like a dream production, too.

I had to verify first that it’s NOT a comic book.

The book is now in my wishlist, awaiting money.
I read the first six pages, before the Amazon sampler started skipping pages, and was struck with how well-described everything was, but not overly so. I felt like I was watching a film. Nothing much has happened yet, and still I was very interested. This doesn’t happen to me often. I feel like a good story is just beginning, and am compelled to continue.

I’ll likely be buying this sooner rather than later, and probably sooner than I should.

We’ve got a trailer. Looks great. Coming out in August!

Gotta say those scenes look almost exactly like they did in my imagination while reading the novel. The novel is perfect for the serial TV format; it’s more a series of vignettes with loosely connected characters than a complete narrative. This looks awesome.

I really hope the show captures the tone of the book, with all of the black characters basically shrugging off this cosmic horror shit: “That’s all you got? I get worse than that walking down the street.”

Either I didn’t watch the trailer closely enough or one of us is confused about what a shoggoth is. :)

Since this is a miniseries, and the book is pretty much an anthology, it looks like they can get all the stuff from the book in there, which could be fun. The trailer sure makes it look like they’re going to all the places the book went.

Looks pretty darn cool. I picked up the book some time back but haven’t made time to read it, maybe I’ll just go into this cold.

Yeah the first half or so of the trailer made it look like it was all going to be in ‘Lovecraft Country’- ie, the first story. Then there were flashes from the rest of them, so I’m excited. I remarked in the Tales From The Loop thread that structurally that show was exactly how the LC book is built, and I hoped they were keeping it for the show. Looks like they might just be.

This summarizes what I think.