You can adjust graphics options in-game now; previously you had to to this through the launcher.

Just a note, this wasn’t the case, graphics settings, incl. resolution and all that was always modifiable ingame.

Some good news about Mafia II at least…

Ah, even fewer changes than I had assumed. :(

Guys, 2 and 3 were farmed out to different porting studios for the remasters. What did you expect? It’s one thing to farm out a port. To farm out a remaster to a company that specializes in ports? Good luck with that.

To be fair, because there wasn’t a lot of information available before launch, it’s not outrageous to think a Mafia trilogy collection would be handled in-house at Hangar 13. I’ve never even heard of d3t, so I’m not familiar with their reputation.

To farm out a remaster to a company that specializes in ports? Good luck with that.

Wait, why would this be bad? A company that specializes in ports should be one that’s good at it, right? Wasn’t the reportedly excellent Saints Row 3 Remaster done by a company that’s done a number of good remasters now? At least, I think that’s what was mentioned in the Digital Foundry video about it.

Wait, why would this be bad? A company that specializes in ports should be one that’s good at it, right?

Ports aren’t the same as remasters. A remaster means tweaking the actual textures, modifying the renderer etc; not just making sure it works on other platforms. This is much closer to design work.

Wasn’t the reportedly excellent Saints Row 3 Remaster done by a company that’s done a number of good remasters now? At least, I think that’s what was mentioned in the Digital Foundry video about it.

I looked them up (Sperasoft) and it’s an interesting company. They’re far more than porters or even remaster makers. They’re deeply involved with AAA projects – not remasters, but the actual games (e.g. they’re contributing to the next Assassin’s Creed). They’re essentially contractors/outsourcers to Russia and Poland.

Starting to wonder if 2K was too eager for sales and released 2 & 3 before they could be made ready. Had they waited until August when the M1 remake was due to be released, how many bugs and glitches could have been squished?

Instead, they are giving Jim Sterling a great intro for a roast of the re-released M2. Seriously, watch the first 15 seconds. 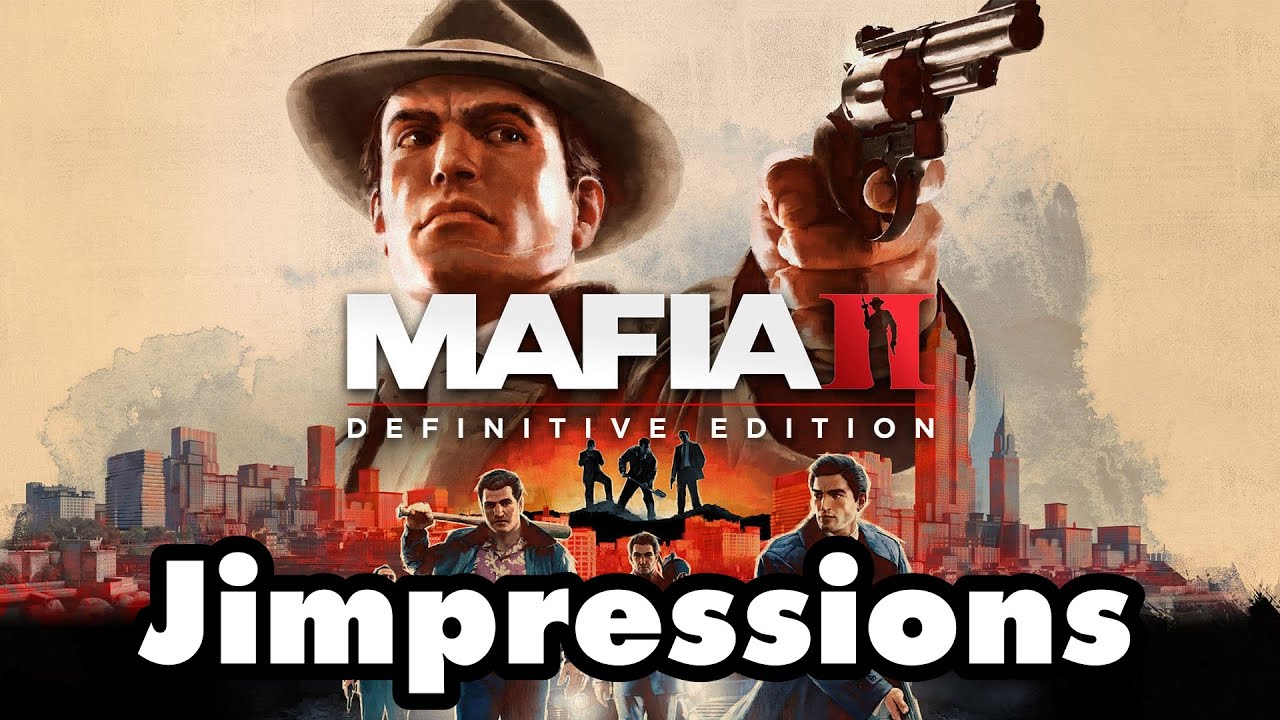 Please read this message from the Mafia: Trilogy developers. If you’ve encountered issues, please submit them to support.2K.com. https://t.co/nEKxSsOOAN 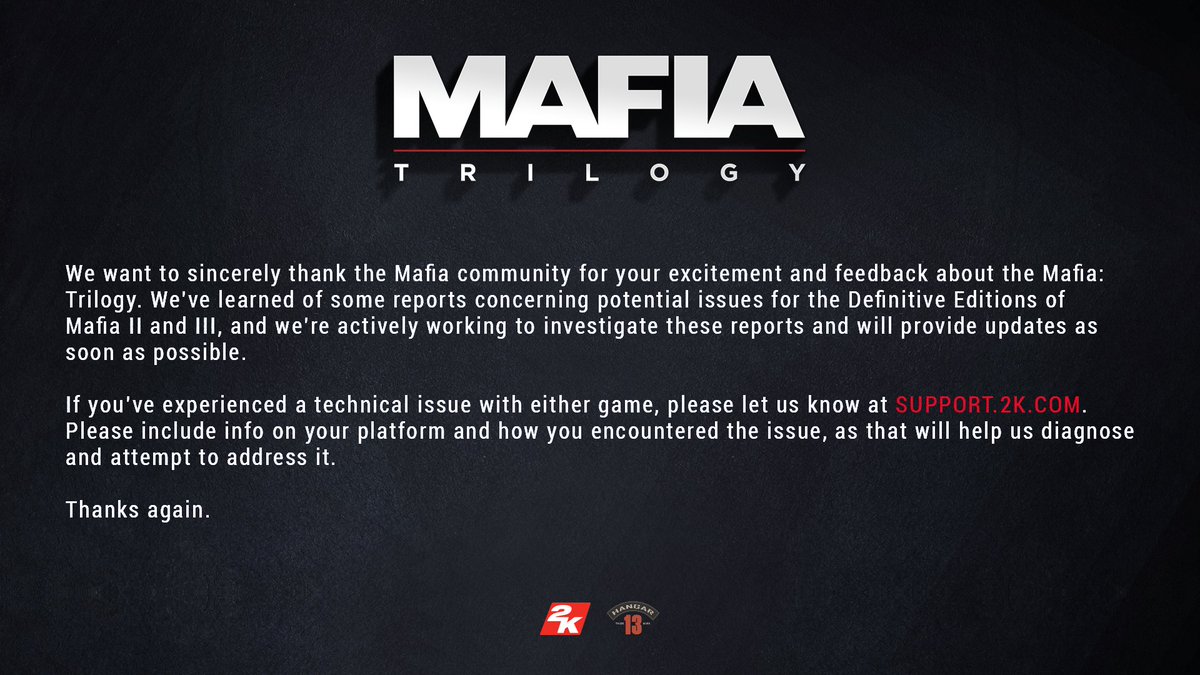 Really hope they fix it all up, incl. the “minor” stuff like tree pop-in and eye facial animations. 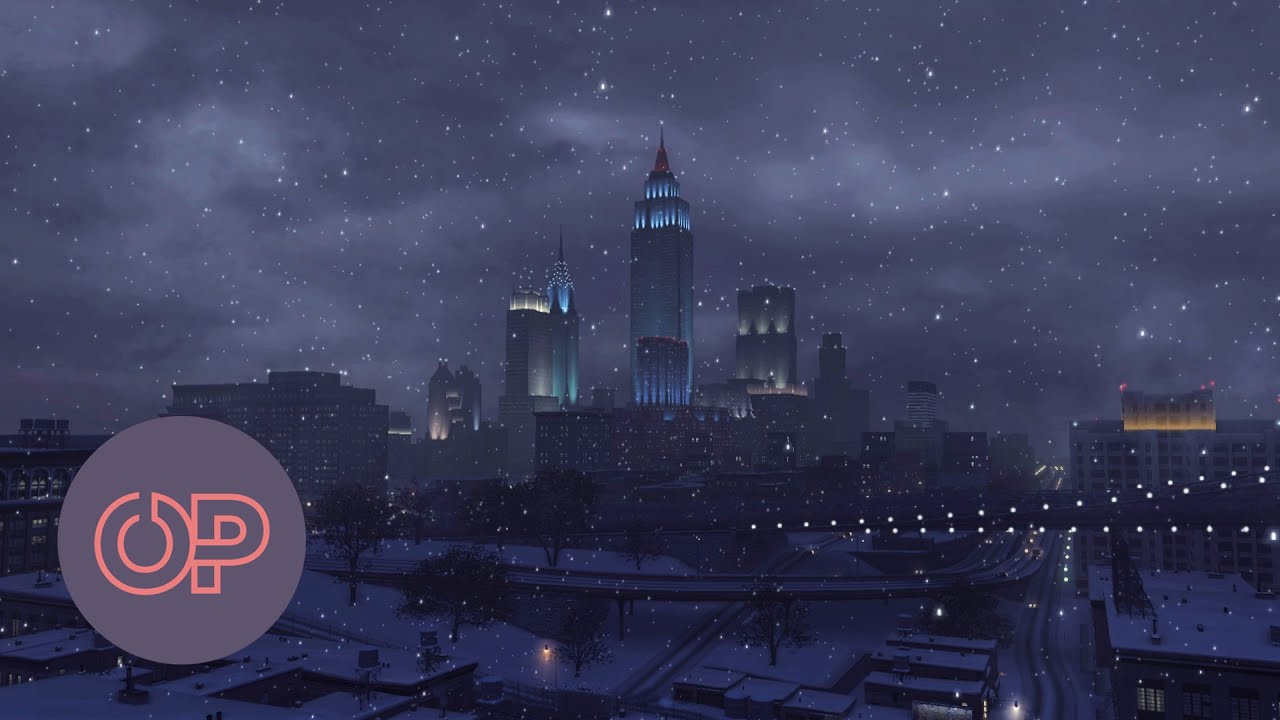 OK, that was funny.

First trailer, made of cutscenes 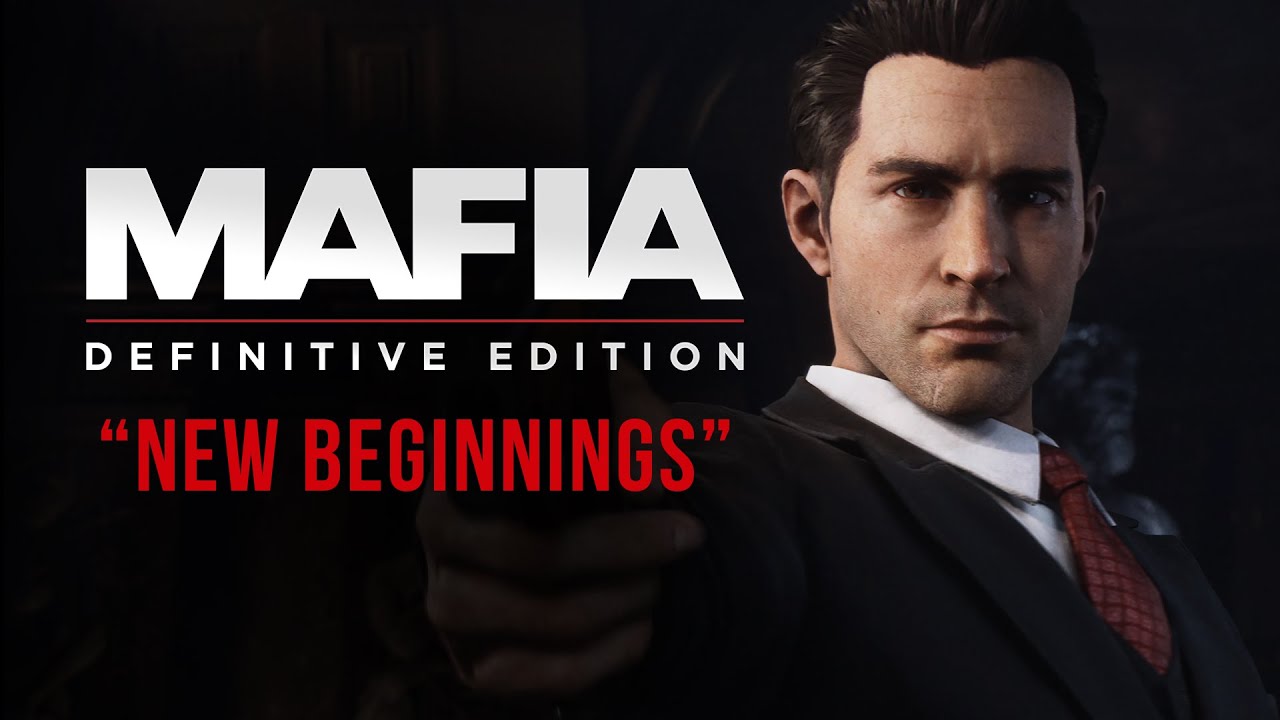 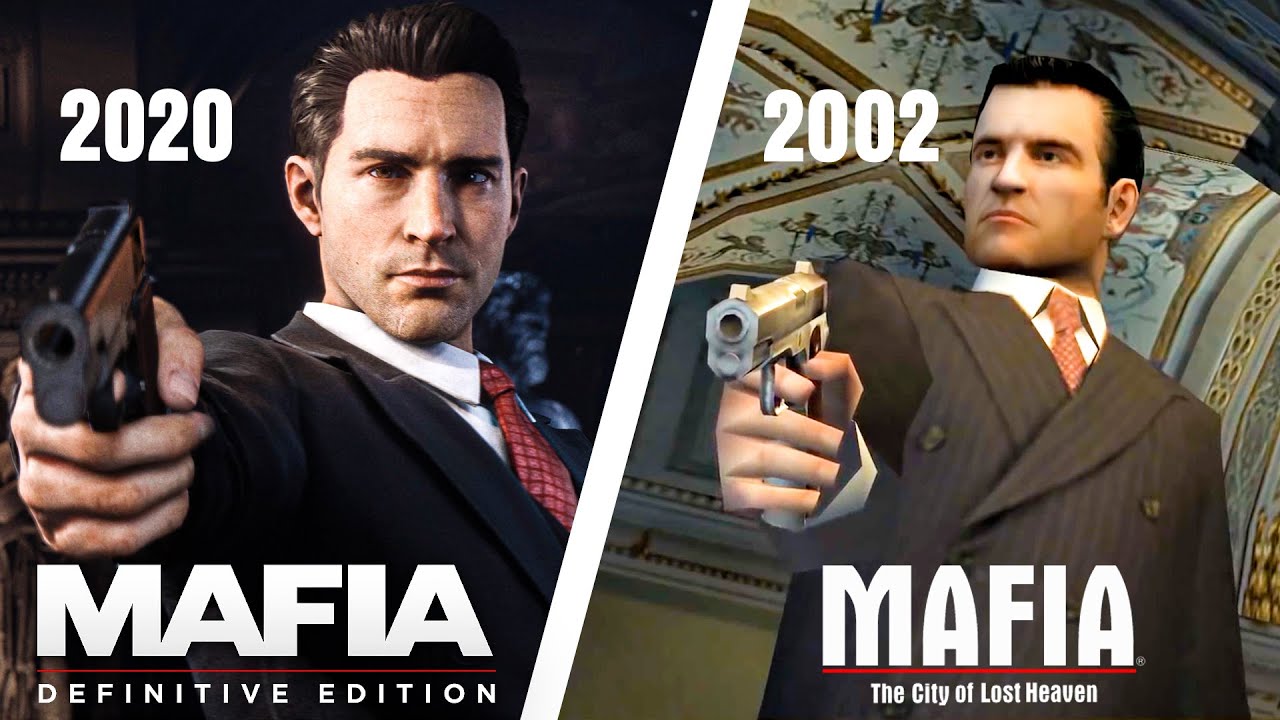 Because Mafia: Definitive Edition is a complete remake, we rebuilt virtually everything from the ground up," says Hangar 13 President and CCO Haden Blackman, who oversaw the development of the game and its expanded take on the original story. “That includes the cinematics, which were remade using our state-of-the-art motion capture and facial likeness technologies. Since our cinematics rely heavily on motion capture data, it was essential that we have both voice and physical performances. We looked for actors who not only sounded the part, but also looked the part and could perform on both the motion capture stage and in the VO booth.”

“I definitely looked into the possibility of getting the original actors,” says Hangar 13 Producer Nicole Sandoval, who managed all mocap and voice recording work with the narrative team across cinematics and dialogue. But bringing back the original English cast just wasn’t viable, not to mention that it’s been nearly two decades since the original Mafia’s debut; “No one’s voice stays the same, especially after such a long period of time,” notes Sandoval.

“Ultimately, Haden and Alex [Cox, associate game director] and I really wanted to make this an ensemble,” she says. "Some might ask ‘Well, why not just keep Tommy?’ Sure, but then you don’t really have a ground-up ensemble that you’ve built to go with the expanded version of the story.

Hmm, that’s a bit of a bummer. I really liked the VA of the guy who played Tommy Angelo back in 2003 or whenever it was. But maybe the current dude will be just as good.

Funnily enough in czech version he and most other characters will be voiced by the same people as in the original. Really curious to hear the difference because Marek Vašut is 60 now and will be voicing 30-something.

Seeing remake footage of the mission where you smuggle Canadian whisky is bringing back wonderful memories. Unfortunately, Mafia DE has been delayed out of August to September, but we’ll be getting a gameplay reveal on July 22. 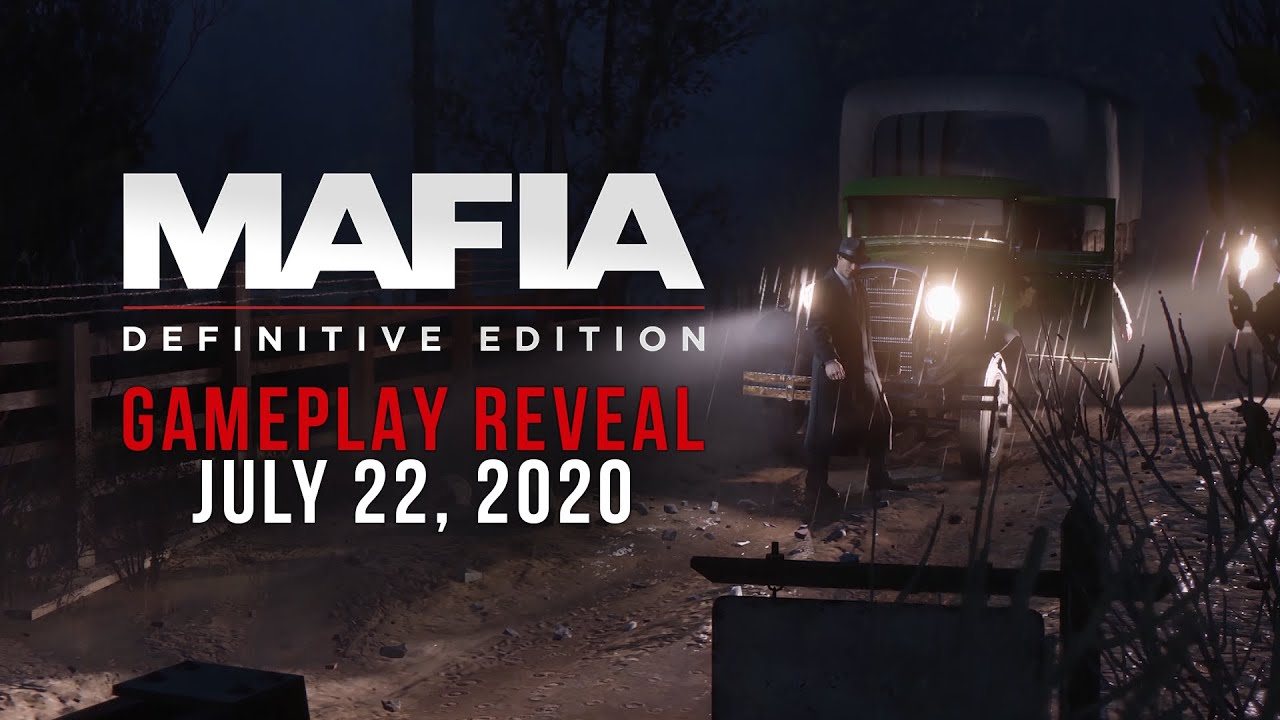 Looks gorgeous, I really can’t wait. Hopefully the delay means it will be polished and perfect at launch, unlike M3 and definitive editions.

Hangar 13's spruced-up remake of the 2002 crime 'em up has been pushed back into September, as the devs adjust to life under Covid-19.

You guys remember that level in the parking garage? It gave me fits but I remember it fondly. I really hope the game still has all the music from the 2003 game.

Yes, that was one of the most memorable fighting sequences in any shooter ever.