In case anyone missed the announcement a while back, this weekend is another Arena Open. The first major limited format tournament on Arena, so it’s a pretty big deal.

The Arena Open returns this month, this time bringing Kaldheim Sealed to the competitive spotlight.

Draft would have been nice, but I’ll take sealed. Better than yet another constructed event!

First try, got myself spanked, as one would expect. Went 2-3 with this weak-ass deck.

Second try, ended up with this wierd 4-color thing that went 5-3. Would have liked to play aggro with the two Hammers, but just didn’t have the 2-drops to be feasible.

And the third run, another green-based 4 color deck that was terrible, ended up 1-3.

Fourth pool, went RG splashing black and white and that was even worse, 0-3.

I’ve certainly learned that I’m best at playing aggro in these sealed environments. I just don’t do as well with the slower decks, probably gives me more opportunities to screw up.

First time I’ve done day 2 in one of these things. I’ll be shocked if I win more than one match…but who knows, maybe my pool will have good aggro again.

I exceeded my expectations for day 2 by winning not one, but two matches! And losing two, so I’m done. Deck was a terrible BR Berserker thing. Was nice when it worked, but any mana problems and it just folded - and I had plenty of games with mana problems.

Hey good one! Two match wins is no joke with that size of a field.

Do you get a new set of cards on Day 2 or you just continue on with Day 1’s deck?

Do you get a new set of cards on Day 2 or you just continue on with Day 1’s deck?

Day 2 is a new card pool. And also Day 2 is only best-of-three. On the first day, you got to choose best-of-one or best-of-three.

Arena gets a full release for Android and iOS devices tomorrow!

Anyone else playing this?

Got the end-of-set stats email: 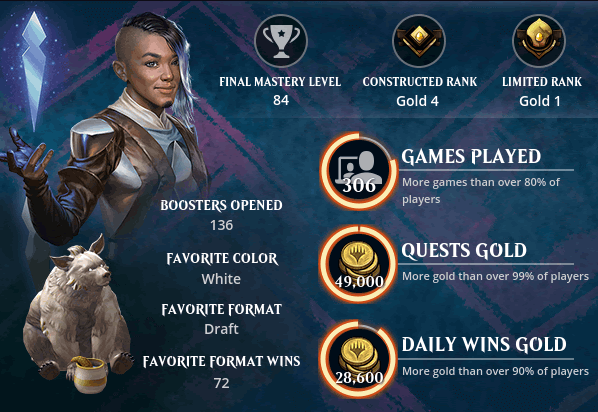 Lowest number of games played of any set besides M21, according to the emails. I did not like Kaldheim much. I dunno where they got that “favorite format draft” bit, I played a lot more Brawl.

I haven’t played much myself since Kaldheim came out. I didn’t mind the meta, just a little burned out and using my gaming time for other things. Not sure I ever bothered getting past Platinum the whole set. 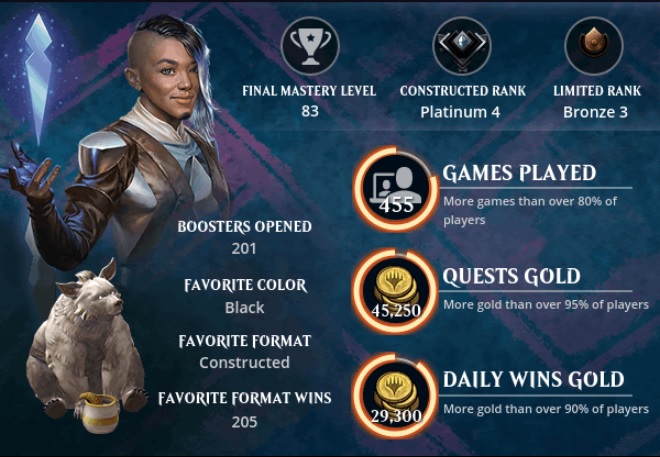 I only got back into Magic Arena a couple of weeks ago, and had a good enough time to preorder one of the Strixhaven packs. 50 booster packs OR the mastery pass, 3 draft tokens, and 1 sealed token. I am so glad that I chose the latter, I haven’t played limited much before but I am having a blast. Deck building becomes much more interesting when you’re so limited by cards (or at least less overwhelming than standard constructed), and I have found that the matches are much more varied than in constructed. You see cards you’d never see in constructed, you see suboptimal cards, and you don’t get the really annoying control/mill decks. 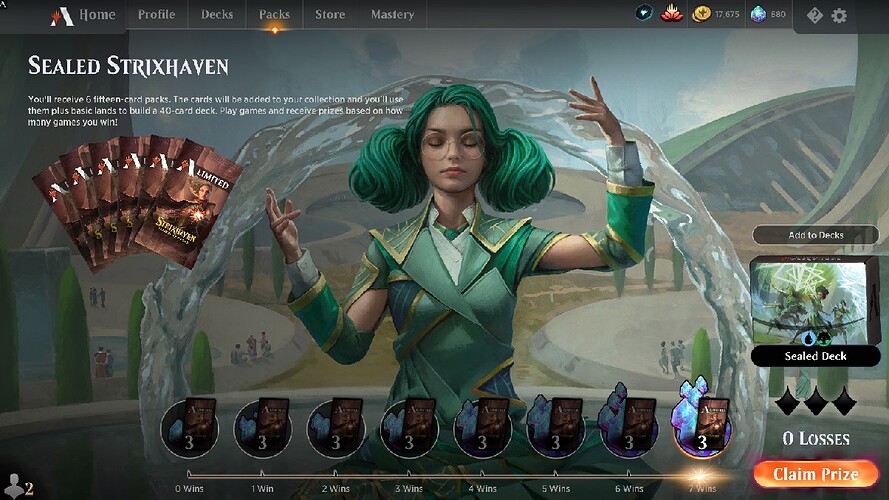 Yeah man! Limited is the jam.

Yeah man! Limited is the jam.

This. I only play constructed around the table with my friends, and we all build the craziest/most inefficient decks packed full of crazy shit. It’s like the roguelike of games - you just never know what someone’s going to pull out (but it’s probably going to synergize well, even if by accident).

For fun, and as an example, here is one of my normal decks. 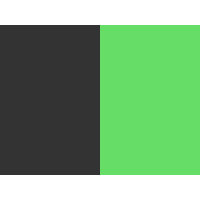 But a few times a year we love getting together and drafting a new set - and this is an itch that is easily scratched on Arena (my son drafts several times on Arena each set, and never pays a dime for it). Drafting is the bomb.

My first Arena sealed was a success. 7-2 with this baby:

Most games were won on the backs of pests.

Nicely done! I’ve tried Witherbloom in a couple of drafts and it hasn’t gone well, never seem to have enough pest generation. But sealed is a different beast.

Thus far the best draft decks seem to be mostly either red/blue (my best run so far was Prismari) or blue/green. Not particularly surprising with all the magecraft triggers running around. Occasionally you get run over by a black/white aggro draw, and once a guy stomped me with that black/green 11/10 guy, but those are the exceptions. Mainly it’s about tempo or making big fractals. Have yet to see a red/white deck do anything of note.

It’s crazy how vastly different our experiences have been. My first draft was Prismari and it went SO horribly. It was so slow that I just got completely run over by basically everyone.

Lorehold seems like a trap almost. It has a very clear mechanical identity, and you would think the recursion would give it a lot of inevitability. But I’m finding it really challenging to put the pieces together. In fact, I would say that about the draft format as a whole. If you aren’t smart about your selections and your synergies, you’re going to get blown out by someone who was. It’s a little unforgiving.

I say that as a Bad Drafter, though.

In fact, I would say that about the draft format as a whole. If you aren’t smart about your selections and your synergies, you’re going to get blown out by someone who was. It’s a little unforgiving.

Oh, I agree. I’m a mediocre drafter at best. I do pretty well when it’s very clear which colors (or in this set, school pairs) are open, but if it’s not extremely obvious what’s being drafted by my neighbors, I end up with really bad decks. Still, I enjoy doing it every once in a while, especially since it’s basically free to draft occasionally on Arena by using your daily quest gold.

Use the code "RestorativeBurst" to automatically level up by two levels. https://t.co/HoM1WTAAc0 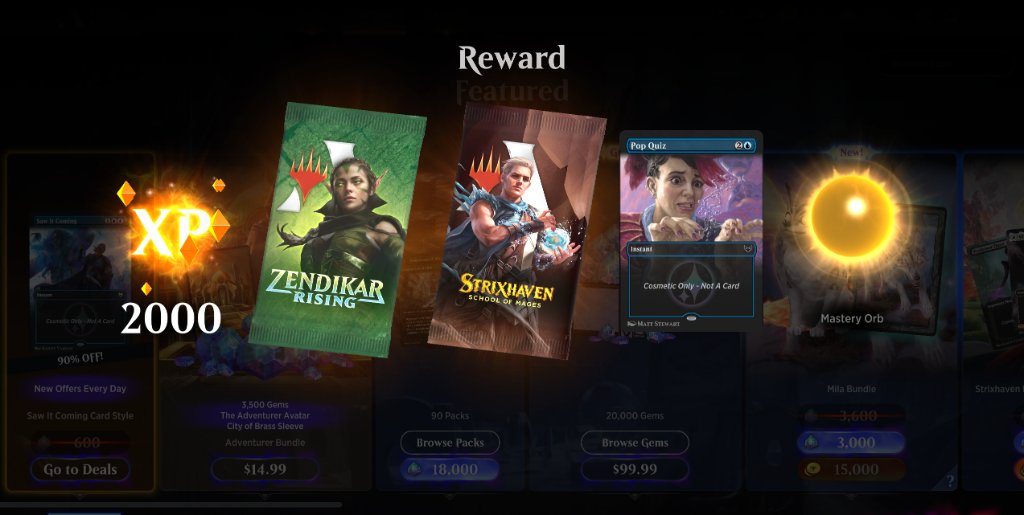 Apparently this is in apology for the bug that kept you from seeing your daily quests for the last few days.