CraigM is saying, when you click the card it only shows base cost. So 9. Not saying you did anything wrong.

This game is upsettingly addictive. I might have to uninstall it. I love wrecking chumps with Dr. Octopus on the right, pulling in whatever they were saving for turn 6, and then Heimdalling all my guys to the left. If it works, it’s fun. If it doesn’t work, I play until it works.

I think Dracula was my third card in pool 3, and I’ve gotten almost 20 more since then, but I never get tired of using Dracula to sneak heavy hitters like Infinaut onto the board. I completely agree, when you’ve got a satisfying combo or play it just feels so good, it hasn’t diminished yet.

Good grief! Just started hitting players with Gambit, Desth, and some others that seem way overpowered compared to my Sunspot/Infinaut deck. Some of it is not knowing what these cards do yet but getting crushed on all locations with no obvious cards that can compete is craptastic. That and hitting the Snapbucks level were advancing and getting new cards has slowed due to a slower trickle of credits. Still love it and and play off and on thru the day. But damn what a wall I just hit.

Sunspot/ Infinaut is one of my favorite archetypes to face. My Shang Chi-Killmonger-Odin deck eats it for lunch.

I’m early into pool 3 myself and find no trouble keeping up. Granted I’m only 3 cards (level 514) into pool 3 so most people at this point don’t have full sets of pool 3 decks. Maybe that changes, but the sniper deck I use mostly only fails due to bad luck on draws, or a poor guess on turn 6.

My do I love when someone plays a big hitter into a lane I had put Shang Chi earlier only for me to Odin drop and swipe the win.

This happened to me and it stumped me until I realized they had played Wave the turn before.

Just an FYI for those who didn’t see the announcement: there is a new token and card acquiring method coming for Pool 3 cards, as well as new Pool 4&5 cards (earned with pool 3, but as more rare drops, 10% and 1% of card pulls).

There is also a token buy system coming too. So when it launches, probably next week, you can use tokens to buy Pool 3 cards from the store, on a rotating 8 hour refresh. You can also ‘pin’ a specific card for later if you don’t have tokens now. So that way if you really need Hela for a deck you want to run, you can buy her using these new tokens.
They come from the caches, in lieu of the boosters. So right now if you unlock a cache it may give boosters, but once the update drops it would be these tokens used to purchase the specific cards. However if you unlock, but do not open, a cache the loot table is rolled when it unlocks, so you would not get the benefit but upgrading cards but not opening.

TLDR new resource coming. Save credits and don’t upgrade collection until it drops. 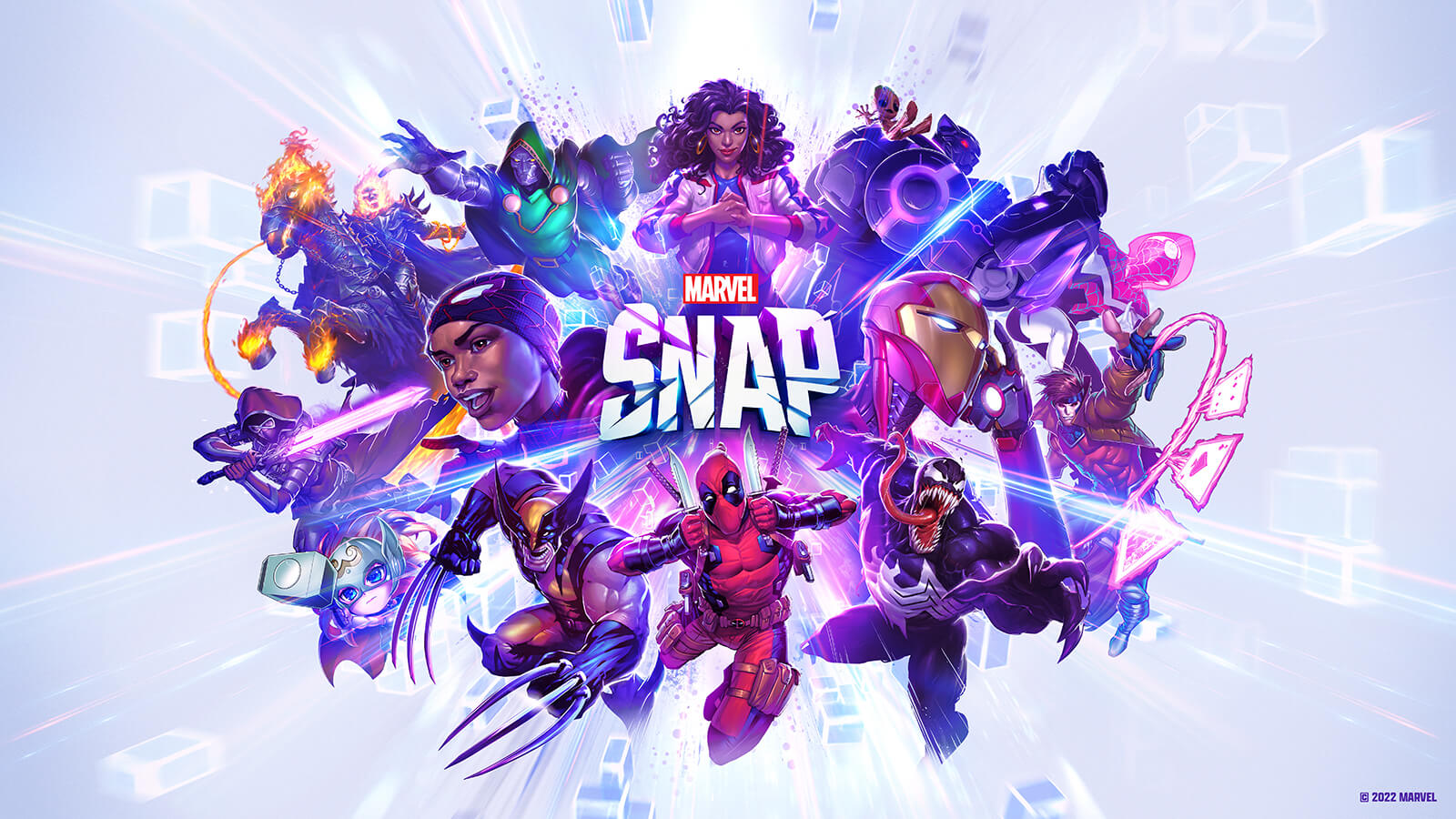 MARVEL SNAP is a fast-paced card battle game. In the game, you will be able to choose members from the Marvel multiverse to build your own super hero team.The game is simple and straightforward, with no numerical growth. Just download the game! And...

TLDR new resource coming. Save credits and don’t upgrade collection until it drops.

I don’t think this is quite correct. The tiers are:

Thanks for correction, I was going from memory.

Yes if you are close to 1k or 3k, then going for it makes sense. If you are like me at 510? Then hold the credits.

Still I do generally like the change, making it so you have some control over the collection seems good.

Oh snap, I knew about the new pools/series tiers and the token shop, but not about the token credit gift based on CL.

Just hit 523 last night, so I can at least get 3 cards when this update launches!!11

For a second I thought I was good going into turn six, thinking I could move my Nightcrawler into lane one for the win.

But I forgot Professor X locked even cards from moving out of a lane. So I was toast, just staring at for a few moments before retreating, and then…my opponent retreated!

Did they make the same wrong read initially that I did? I don’t know why else they would’ve quit, there’s literally no card I know of that could’ve saved me since there was no where to play. Oh well, I’ll take it!

Sigh. Well I just had a Billy Beane moment. By that I mean ‘My shit don’t work in the playoffs rank 50’s.

My sniping deck just wasn’t cutting it. I got to 57, but couldn’t advance past. Problem was my wins were dominant early, and my losses were all close, meaning turn 6, and usually because I didn’t draw the piece to win. Invariably I always had the card I need in the deck, but bad luck sometimes screwed me. And it was happening too often. ‘If I draw Shang Chi or Killmonger, I win’ and fail to draw them. So my wins tended to net 1-2 cubes, my losses were 4-8. Which meant even though I won more than lost, I was treading water. The end for me was when I had a run that saw me go from 58 to 52 with consecutive losses where I just got hosed by luck. Two games in a row where I didn’t even play a card on turns 1-3!

So I caved, and when Bifrost came up as the hot location I made a move deck. I didn’t look up the deck and put my own spin, but I knew how they worked from facing them. 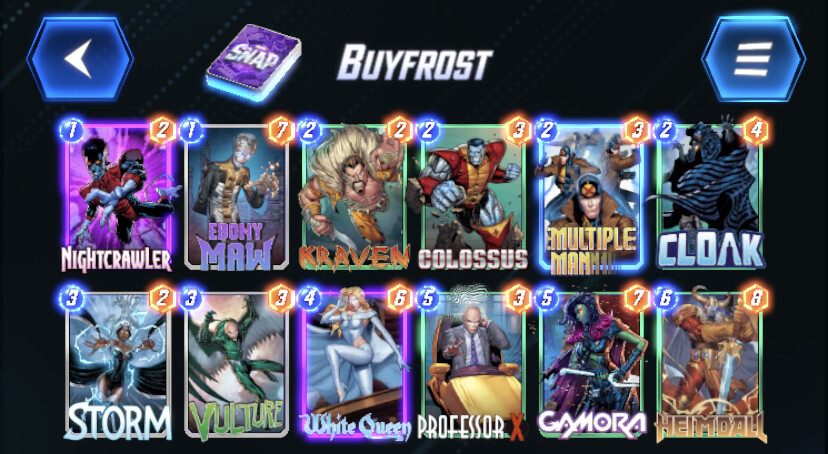 I went from 52 to 65 losing only twice. Sigh. Its good, and its fun. And even when Bifrost doesn’t show it worked. I will say that using Professor X turn 5 on the left position after Bifrost left only Colossus and Multiple Man? Very effective, won me some games with that. Also Kraven is absurd, I’ve managed to get him over 30 a few times.

Really part of it is these are stronger as stand alone pieces than my previous deck. Gamora on Bar Sinister turn 5? lol. Thank you for the 63 power.

I hate going too ‘meta’ but this really just is such a strong archetype.

Edit: the other advantage this deck has is, due to turn 6 Heimdal, I am more likely to net 8 cubes due to opponents misreading how my turn 6 power break looks. Always love seeing them drop on the right lane to ‘win’ it then immediately shifting things left. That 8 cube win frequency (>25%) alone is enough to stay with this deck.

If you can design a deck with early power and Adam Warlock, consistency is pretty decent

Not a card I have yet.

My pool 3 pulls so far at CL563. I already was using Wong, Ironheart, White Tiger and Odin, and was dabbling with Lockjaw before going for a standard Move deck due to Bifrost. 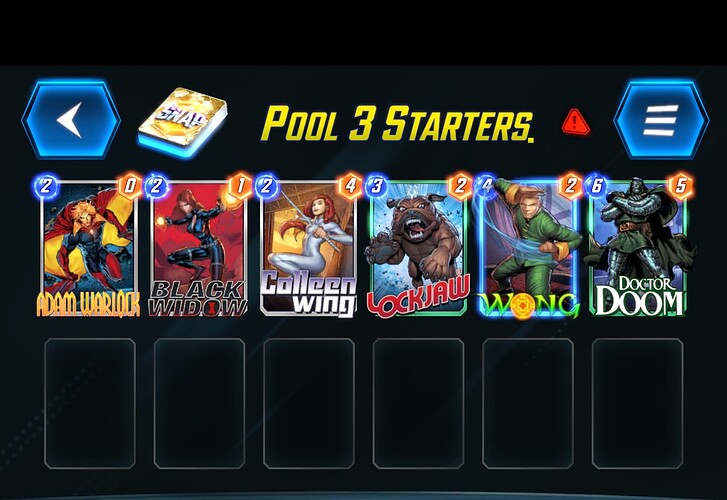 Yeah at 510 only have Hood and Electro from pool 3.

Granted I have like 5000 credits and unlimited boosters as soon as the new patch hits, so I’ll quickly reach 600+

The Hood was one of my last three unlocks. would have loved him early. Dr Doom is probably my most played card. Was one of my first pulls for Series 3 and I love him. I play a lot of Doom and Widow. Getting Adam early can be amazing too.

Huh, so there is a cap 5000 credits. Guess my hold all upgrades until the patch won’t work, already had to unlock one cache, very nearly need to unlock a second.

Nice, I think Wong and Doom are both pretty coveted P3 cards, maybe Lockjaw too. Cool to get them early!

I’m trying a deck with BOTH Wong and Doom and pulled off the below.