Eventually you won’t have the credits to go around. Really there is no reason to upgrade one card over another. They are functionally interchangeable, I just tend to upgrade cards I use.

I will say that always do the level 1 upgrade. It is the most efficient, credit wise. 25 credits for 1 level, as opposed to 100 for 2 CL. Personally once I do the level 1 upgrade for all cards I try to focus all the rest on maxing a single card. Not always possible but there you go. There is a mechanism when the card gets to rank 10 (infinite, last upgrade) you can do an infinite split and start a new copy of the card at level 1, but it has a holographic background. This is a good way to keep using boosters for cards once you max it, as well as a nice reward. You won’t get there for a while though (usually just before getting to pool 3).

But where you are, just always upgrade everything is the right call.

Early on, just do normal upgrades rather than fast upgrades. You’ll climb collection level and unlock more cards to build your deck with. As noted, the fast credit upgrade is tempting, but the money always works better to do a normal upgrade (250 credits to gain four collection via fast upgrade vs 200 credits to gain those same four collection levels normally). It’s tempting to do the fast level to get more collection, but just do missions to get credits and upgrade the normal way as a better longterm play.

So that dirty zoo deck where you try to play card-count based boosts during rounds 2-5 and then plop down six 1 costs on round 6 for a surprise win, but with the flex picks optimized for the Bar Sinister event.

It works nicely since the deck cares so little about rounds 1-3; you can wait until you know the locations before needing to commit. If the Bar doesn’t come up, pivoting to the normal play is no problem.

The ideal endgame is 4x Vision on round 5, followed by 4x Blue Marvel and Squirrel Girl on round 6. That’s so much flexibility and cross-board power that it doesn’t really matter what you did in the initial rounds as long as it didn’t fill the board.

I put the Hobgoblin in to fill the same role as Vision, to get more consistent draws, but it is a lot harder to use. You really need priority on round 5 to reveal Hobgoblin before the opponent reveals in the Bar and fills it up, and the deck is set up to not have priority in the endgame.

In a reversal, I’m typing this post on a laptop rather than on mobile, so that means I don’t have access to my phone’s screenshot gallery. But dropping a note of thanks for this tweak.

I’ve been trying the Nightcrawler->Blue Marvel->Onslaught play like a lot of others, but this deck allows for more flexibility/unpredictability. Also, it’s been kinda hilarious to mess with people via Hobgoblin (though I learned the hard way that using him on Bar Sinister means leaving one copy on your side still).

The Bar Sinister Zoo is a nicely timed break from my Midnight Sons Discard, though I still run into players who are surprised when my Bar Sinister Dracula juggles Apocalypse four times.

Finally completed my Series 3 collection at level 3120. I haven’t seen anything in the token shop yet that really calls to me. Thinking about She Hulk for a slightly different way to build Death, but I haven’t seen her pop up yet.

Well I just unlocked Hell Cow through normal unlock, and Hela came up to buy so I did. Maybe now I can go back and try a pool 3 discard deck. the only card missing that seems good would be Dracula, but I won’t worry about that. Since I’m 80 anyhow, and won’t have time for 90, now may be a good time to experiment with that (or, really, probably in a day when the season turns over).

Well I just unlocked Hell Cow through normal unlock, and Hela came up to buy so I did. Maybe now I can go back and try a pool 3 discard deck. the only card missing that seems good would be Dracula, but I won’t worry about that.

Yeah, this is what I’ve been running lately before @jsnell’s Bar Sinister Zoo. 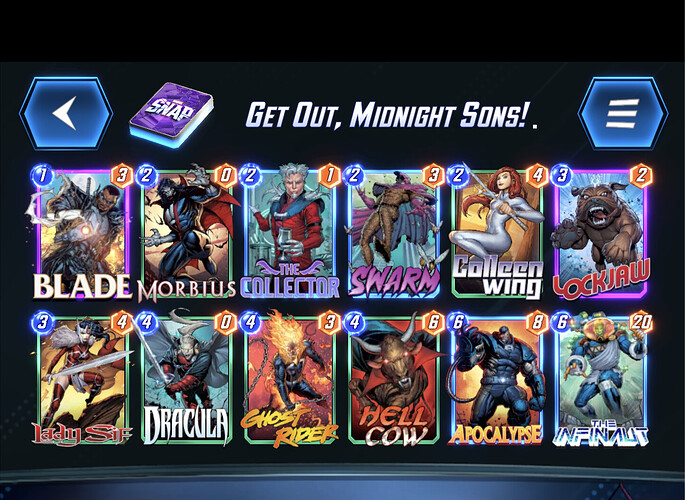 I got Dracula, Hela, Ghost Rider and Hellcow as normal unlocks. Lockjaw was a wacky way to drum up chaos. I didn’t want to go super screenshot heavy, but Lady Sif->Ghost Rider->Infinaut has grabbed a lane and then Dracula takes on a juggled Apocalypse.

My discard deck of mostly pool 2 cards + Dracula seemed to get worse when I unlocked and added Hela. I’ve seen a lot of advocacy for Lockjaw to really amp up the discard churn, and maybe that’s the magic I’m missing, or maybe I just don’t really know how to play discard decks.

I’m still learning how Hela works, and just realized I posted an old screencap before I got Hela. She hasn’t been clutch for me – more of a dalliance. Dracula has still been my heavy lately.

When I get that pop-up after a game saying “you can upgrade Ant-man!” or whoever, is there any reason not to do it? I’ve just been saying yes every time thus far.

I would say that you can always do it later. There’s no reason to upgrade just because the game says you can. Just be careful with spending your credits, in case maybe there’s a specific card you want to upgrade.

If you want to make Hela work, you need to build the deck on the heavy side, to limit the chances of discarding her. That, or have several of those play one card get one card back, same idea.

Any downside to swapping Green Goblin in for Hobgoblin? Makes it more likely to spring on an opponent I’d think.

I expect Green Goblin would work better, I just don’t have it yet.

After struggling lately this deck got me to 60. Might make a run for 70 tomorrow 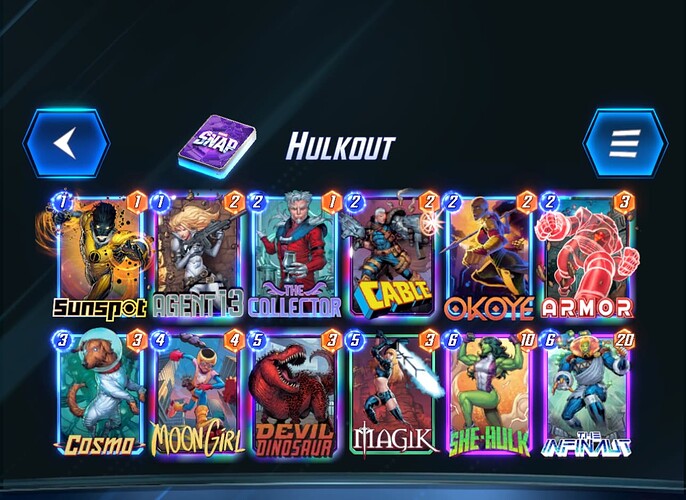 The dream is sunspot on board. she hulk on left in your deck. Moon girl on 4. Magic on 5. No cards on 6, sunspot gains 5. Double she hulks and infinity on 7

Oh man, was sitting pretty at 83 the other night and yesterday just had a run of rotten luck. Just could not draw what I needed, and Cosmo was everywhere (my current most hated card). Fell all the way to 76.

Well with the reset today I wanted to be at 80 before, so I needed to push to get back. Fortunately I did have a good run this morning and was able to.

Now I just need to sit and not play until the rank refresh, because I have 4 cubes to spare. Would suck to end at 79!

When a discard deck comes together, it can be a beautiful thing. Kamar Taj helped too

Lamentis-1 is a fun location: You draw three cards and then it destroys your deck!

Hot tip: The deck destroy does count towards Death.

Ask me how I learned that.

If you have Moon Girl you can even make it 44 power on turn 6.

Why isn’t Retreat Later the only option for a retreat?

From a strategy perspective, I don’t think there’s any case where it’s better to Retreat Now. Am I right? It’s always better to retreat later on the off chance the opponent also retreats.

The only thing now gives you over later is a few seconds saved if you don’t want to wait for your opponent to lock in their turn.

So why not just have a single retreat button that behaves as retreat later currently does, but while you’re waiting for your opponent to end their turn (or retreat) the button then changes to retreat immediately?

In the majority of cases it would be a QOL improvement. Worst case if you absolutely can’t be bothered to wait for an opponent’s decision it’s one additional tap to bail immediately.

Need some help with this game.

I downloaded it to my Android tablet and played 6 matches, won them all, probably against AI…then read there are seasons.

Is the main challenge getting to the highest level in each season? Just seeing how high you can get? Would be cool if there were tournaments or something like that.