I got a 1602 Cloak Variant from hitting 60. Since then, I hover in the 60-65 range as I mess around with decks after buying the season pass and getting Sera from the token shop. Hitting 70 for 500 credits is nice, but otherwise, the climb to Infinite isn’t a big deal for me.

Which deck? Still struggling to get out of the 40s with Seracle surfer

Mostly with this Sera deck (not sure if it’s accurate to call it a control deck) at the start of my climb: 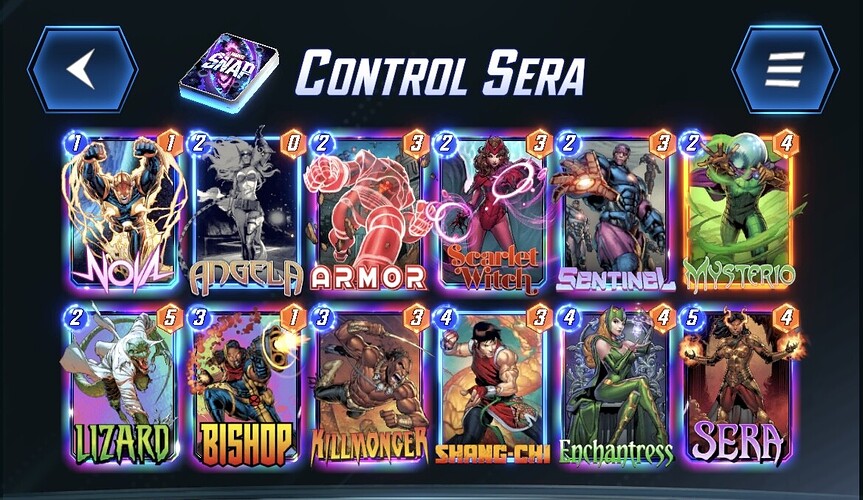 And then a lot of time with this Surfer/Leech/Leader deck: 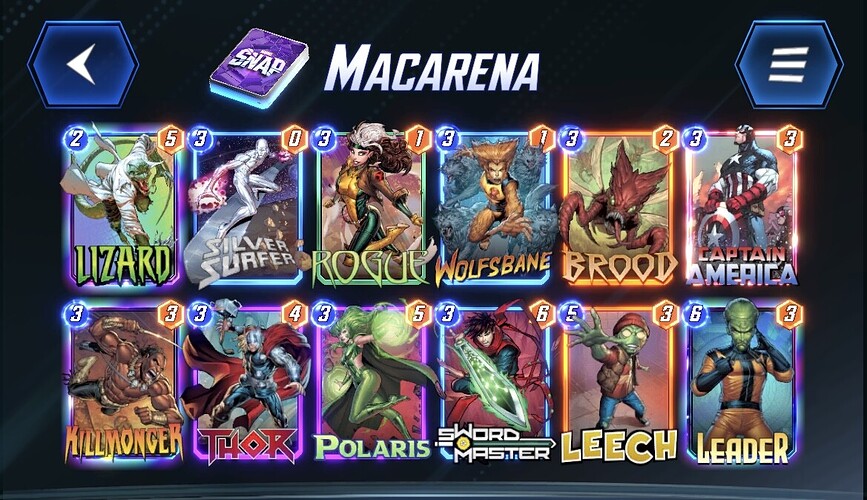 Both had some small tweaks along the way, Rogue is a recent addition to the Surfer deck for example, and I’d swap Maximus in for Sword Master if I had him.

Do you have Patriot, Zabu, Death, and Wave?

Those were my primary decks for climbing this season, Zabu in particular was really successful once I got Spidey.

I do, I just haven’t taken the time to learn a deck for them.

Here’s what I used 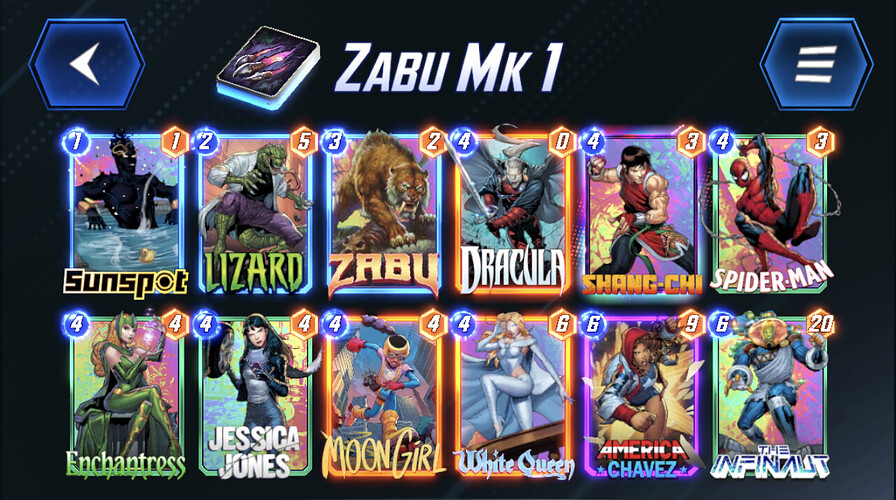 image1284×716 345 KB
Season as desired, but the secret sauce is being able to Moon Girl turn 4 for double Spidey turn 5. That’s almost always a guaranteed win. But lots of other disruption options available. And don’t be afraid to nuke your own Zabu turn 5 with Enchantress to disable their big player.

But double Spidey turn 5 and double Shang Chi turn 6 is straight nasty. Darkhawk with Korg and Rockslide is another good contender. 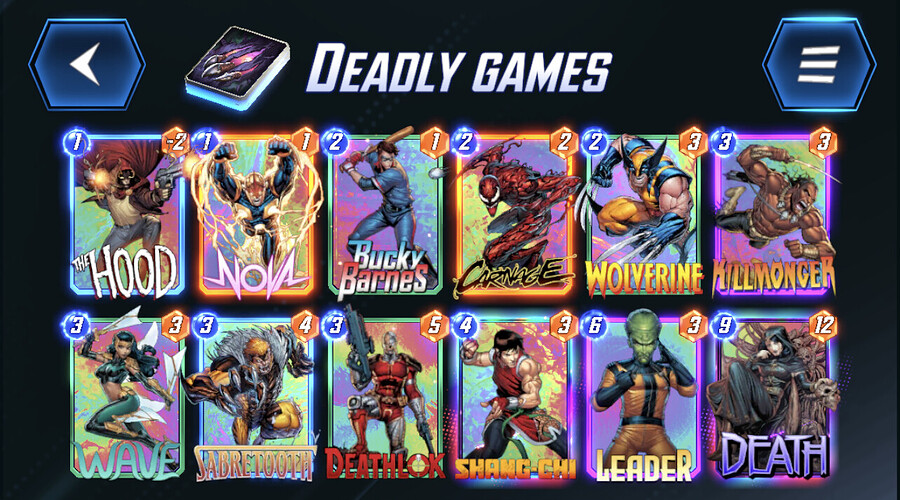 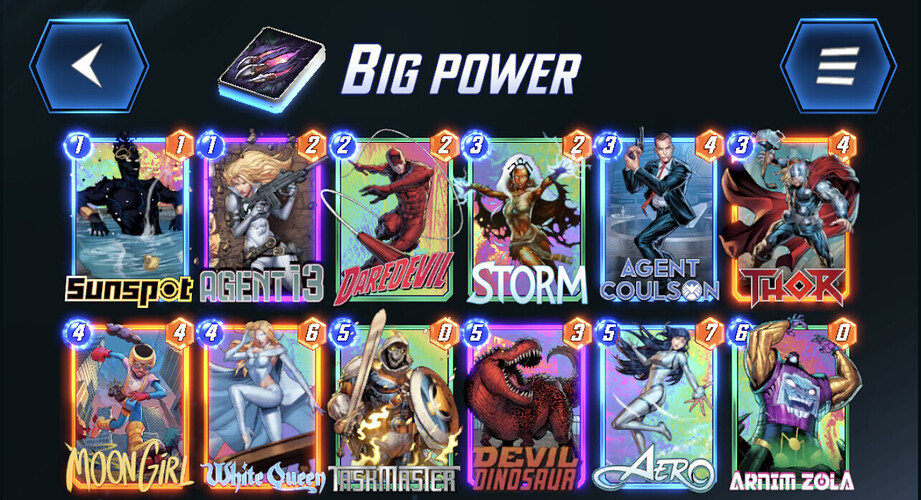 image1284×697 338 KB
If I had Maria Hill I’d add her too. But Coulson is grey here as the weakness is not wanting to play cards early so as not to depower Dino. White Queen is hand size neutral and reveals opponent endgame, Agents are great for boosting power. Play cards in 2 lanes, then Dino on empty lane then Zola Dino turn 6, or Taskmaster instead.

But Zola is always the best option, juking Shang Chi or Enchantress is critical. Or Aero if you don’t need to win a second lane. 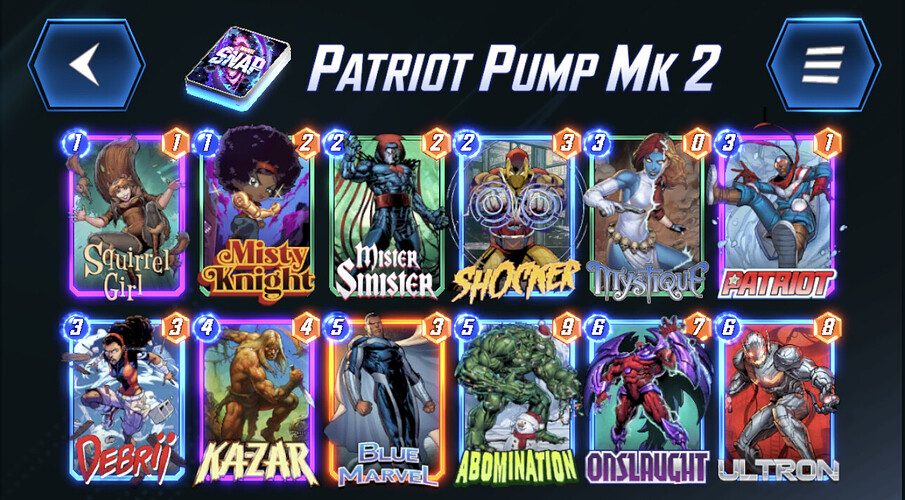 image1284×709 345 KB
Kazar is the backup plan for Patriot. But ideal is Patriot and Mystique, then Blue Marvel/ Onslaught/ Ultron as board stare dictates. Playing Patriot-Mystique turn 6 is devastating if played right.
Thierry_Nguyen January 26, 2023, 4:50am #833

The Gambit Gatling Gun is insane when it procs.

God, what a bullshit weekend of this. Been playing @CraigM ’s Zabu Mk1 deck and just getting trash hands…not playing any card til round 4, not getting Zabu for a dozen games, getting late beats by f’ing Leader or some other bad beat play by my opponent. Oh, and my favorite having multiple lanes be unplayable for various reasons or even better unplayable to me but perfect for my opponents deck. Fuuuuuuuuuuuuuu!

Yeah, it’s the drop coming (or at least planned for) Jan 31. 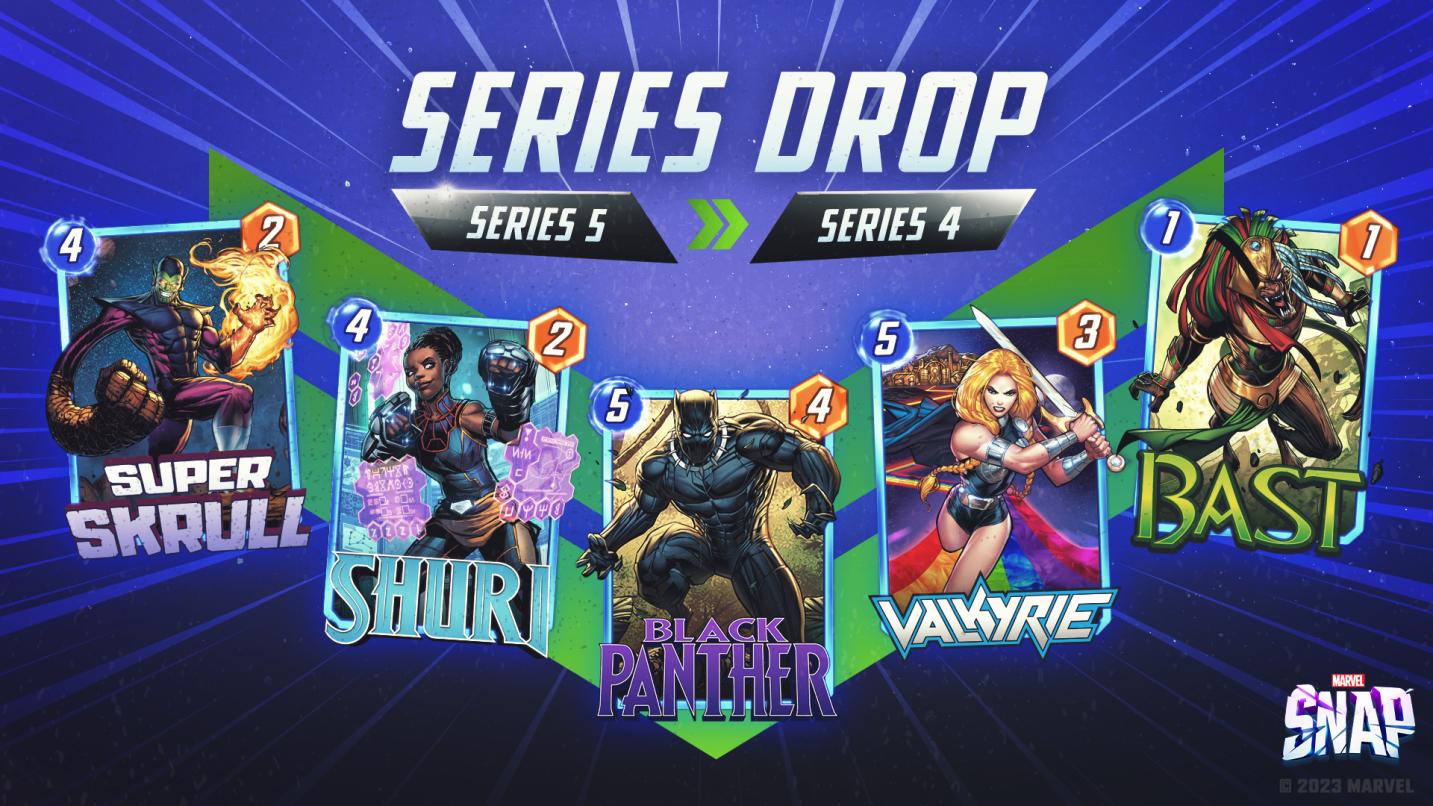 Marvel Snap has announced its first downgrade of Series 4 and 5 cards planned for January 31st, as well as planned updates to the Token Shop and introduction of First Edition Badges.

I still see people occasionally referring to a 5000 credit limit, but I’m over 5k now and the game isn’t complaining, so I guess it must have been patched out at some point. No real reason to do upgrades for the next couple of days until the drop.

Apparently they raised it to 10k in the last patch.

Yeah, you get one Series 4 cards within 40 box openings (so you can be lucky and get two back to back, or unlucky and open like 80 between two), so might as well make sure your Series 4 card is still Series 4. I’d be annoyed if I opened a box now to get She-Hulk who is about to be Series 3 and instead wait to get Shuri or someone else instead.

I got Titania, Maria Hill and Galactus so far, so I feel like another Series 4 is coming soon, so I’m holding until the drop.

They also changed it so caches are not rolled when you unlock them, but when you open. So in theory there is no disadvantage to upgrading cards but just not opening the crates. Which was also changed at the same time.

As for series 4 I got M’baku, Agent Coulson, and Attuma. Coulson has been great in my Devil Dino deck.

They’ve reaffirmed the patch for tomorrow:

@MARVELSNAP
It's coming... Get ready for Battle Mode where you can challenge your friends and see who's really the best! https://t.co/XPxkPXtRN8 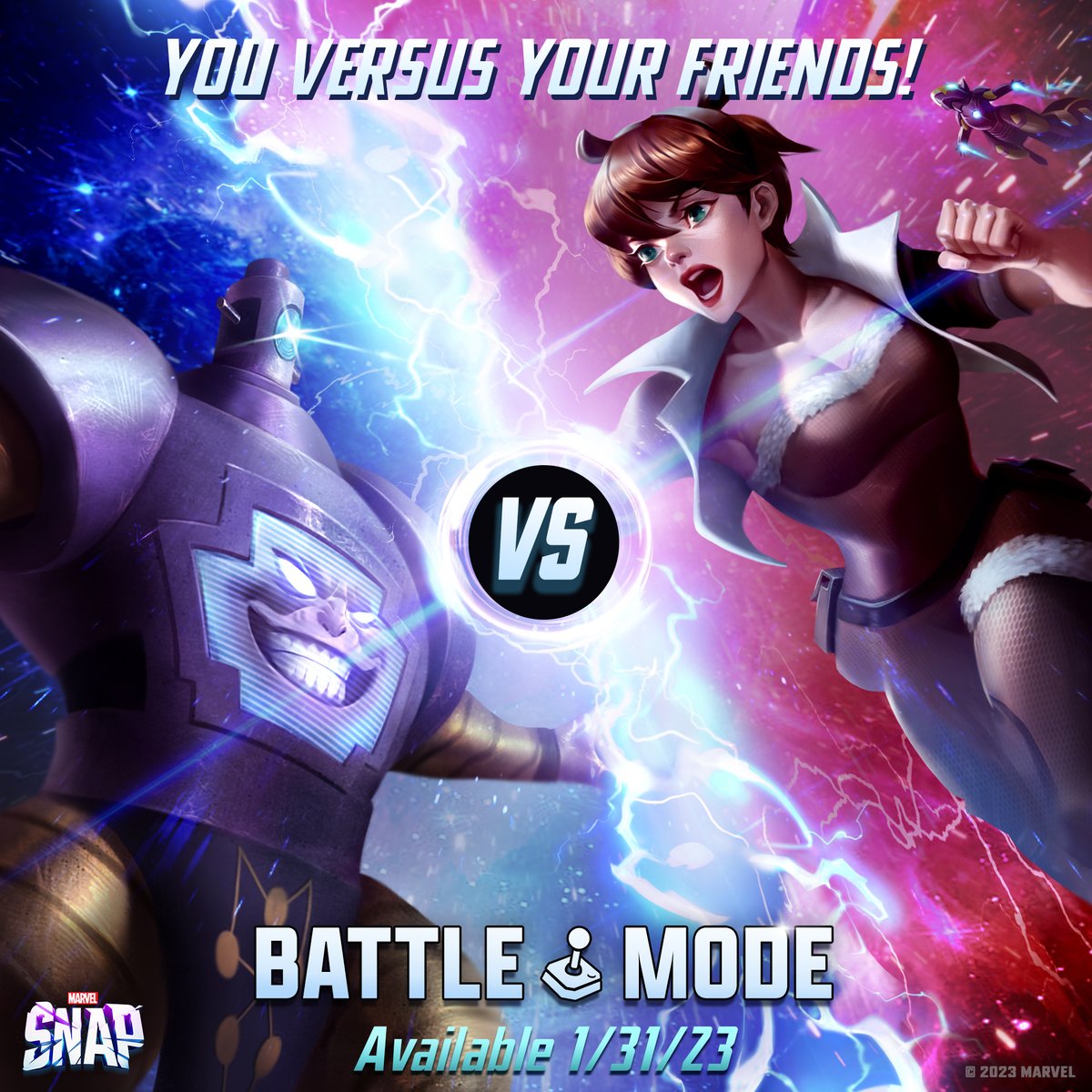 Who is the person on the right supposed to be, Jubilee?

Also @lostcawz ouch. Been there, sometimes you just get screwed by bad luck.

Speaking of Luck, I just unlocked Jane Foster, so am trying a negative Jane deck. First time I pulled off a Negative deck combo, and didn’t even hit with Jane! But negative Iron Man into Mystique is potent stuff. Especially when you hit it with a 0 cost 6 power Zola next turn.

This resolved itself after the main screens cycled again, but just ran into some funny placeholder art or something.

Negative Jane is amazing when it all comes together but honestly it is kind of win more and less reliable than many other variants of Neg. Feels especially bad to reverse Jane. Drawing 3-4 cards on turn 5 to slap them all down for dozens of power on 6 is nuts though.

If I were the tin-foil hat type I’d swear matchmaking pits you against similar deck types, not just basing it on rank and CL.

And that would be such a terrible idea I know that can’t be true, but man, it sure feels like running a surfer deck and running into nothing but surfer decks gets tiring, so I switch to a Zabu deck and now that’s all I see—and often with the same supporting cards.

Again, I realize those are literally the two dominant types in the meta right now. It still feels like they’re messing with me sometimes though.

Requires a code to be passed from game host to opponent. No apparent in app friend list or invite system. Is there anywhere where codes can be shared in RT among interested QT 3 forum dwellers ? Is there a QT3 discord?

If I were the tin-foil hat type I’d swear matchmaking pits you against similar deck types, not just basing it on rank and CL.

And that would be such a terrible idea I know that can’t be true, but man, it sure feels like running a surfer deck and running into nothing but surfer decks gets tiring, so I switch to a Zabu deck and now that’s all I see—and often with the same supporting cards.

I see the same thing and wonder if I’m just seeing a pattern that isn’t there or there is something to it. A couple of dozen games with a Surfer deck and Surfer based opponents then I switch to Patriot and suddenly it’s all Patriot opponents when I haven’t seen him since the last time I Patrioted my deck.

Oh, and Leader still sucks so hard it’s not even funny.