Speaking of Odin and Hobgoblin, if you play Odin into a lane that has Hobgoblin on your side, guess what?

Makes sense when you think about it.

Odin triggers on reveal effects. So yeah, kinda obvious. It’s one of the reasons I have always had an Odin, not a Hulk, in my deck since I got him. I like the versatility it offers

Gotta have Storm or Scarlet Witch in every deck, just in case.

I have decided to run an experiment on how important it is to have cards from a pool to progress in that pool.

I climbed from around 10 to 45 using a deck containing:

And I’m still winning more than I lose. The key, I think, is that I know the deck well and that it has a few cards that counter common cards in the ranks where I played. But I haven’t had to change the deck since Pool 2. It also has the benefit that Doctor Strange and White Tiger let me work around can’t play here / destroy cards played here zones.

If anyone is curious, here is the deck:

Nothing super exciting. It just works nicely for me.

Oooh. Interesting. I got Galactus from Agent 13. It came up with an interesting location in play. So I played my cards accordingly as an experiment…

Question: What do you think will happen if you play Galactus on Sinister London once turn 6 resolves? 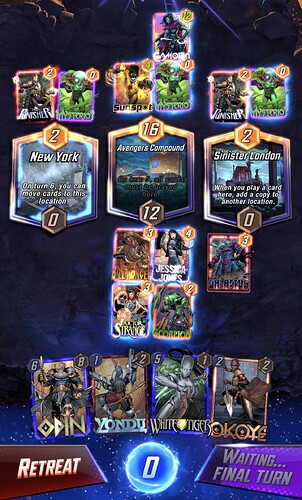 Marvel Snap just announced that their new season will be “The Power Cosmic”, with a new Silver Surfer card.

Other features include a new Token system: As your collection level progresses, you will collect token that can be used to purchase specific cards that you want. Basically, a random Pool 3 card will show up in the store every 8 hours, and you can buy it if you have enough tokens. And if you don’t, you can pin it so it is locked in place until you have earned the tokens. So you can’t just freely pick out any card you want, but you do have a chance to unlock new cards outside of the normal RNG.

They are also introducing new Pool 4 and Pool 5 cards, but you don’t have to unlock all of the Pool 3 cards to get them. They said those cards will be ten times more rare, so I have no idea what that means for collecting them. The new cards include things like M’Baku, Shuri, Attuma, She-Hulk, Titania, Agent Coulson, Maria Hill, Galactus, and Thanos! Oh, and Super Skrull, which copies the Ongoing effects of ALL of your opponent’s cards!

Finished my forgin’. I think I averaged about four attempts per item, the first two I did random for 20 Vibranium and the second two I did specific for 40. Back of the envelope I think that means I needed ~300 Vibranium total, so 150 games? I always had Okoye in my deck. That seems like a lot of games, ~30/day but that could be right; I’ve never tried to log my play. I might also have the math wrong on cumulative Vibranium. I guess I can still see that in the last 24 hours I was at 68 Vibranium (of the daily 200 limit), so that’s 34 games. I guess that pretty well checks out.

You may be high, you do get refunded half for fails

It wasn’t exactly 4 attempts per piece, but that’s what I assumed for my numbers and I think I did it right based on what you said.

Exact same sequence for my second piece since starting at 0 again, so adding 50 gets me to 100 total now. Then the exact same sequence twice more but going for specific pieces where each attempt costs 40, so everything doubles and it’s 100 each for the last two pieces, 300 total.

I just got lucky I guess, 50% success rate and other than a duplicate on my second forge, pretty simple.

So someone just dropped a Death on me on turn 4. Death costs 9. The location had nothing about lowering card costs and no cards had anything like this either. So how did this happen? I’ve seen a few things that were similar in that something happens to a card or multiple cards that I can’t figure out how it happened. But those are usually complicated enough that I figure I’m just missing some modifier. But the Death card simply cost more than we had so I don’t get it.

The cost of Death is reduced for each card destroyed during the game. I sometimes play it for 0 cost on top of my other turn 6 cards. Killmonger is usually involved in that case. :)

4 cost is quite easy to achieve with a bit of destruction.

The cost of Death is reduced for each card destroyed during the game.

When the card came up it showed a cost ot 9. Is that the base and I just can see what the player actually paid for it?

Good question. When I play it, I see the cost I paid. But no clue what the other player sees.

I don’t know why, but I had been stuck for several days rotating between 46-49 in rank. Just some general poor luck and wins not being as many cubes as losses.

But apparently cracking 500 collection level and finally getting to 50 was the difference maker. Immediately got to 55 after.

Did finally change my deck somewhat. Dropped Ironheart for Storm, and Jubilee for Enchantress. Honestly Jubilee feels like a card that should be better, but the breaking point for me was a time where I Jubilee on turn 5, and Odin her again on turn 6. There were 4 cards in my deck. I needed one card only, either through draw or Jubilee, and I win. Just need Shang Chi, with 3 cracks at him.

Nope. Iceman and Scorpion from Jubilee. Yay. 75% chance to draw the card that wins me the game and no.

Now I have absolutely had games where she contributes to a win. But at 4 cost there just needs to be more impact than 1 power and drawing Nova.