This sounds like fun! My gaming/forum time is sporadic, but I’d like to participate in whatever small way I can.

OK, the first thing to think about is our Wizard (which perks and spell books we want) and our race.

Spell-locked flying invisible warships! Their troops will fall like grass before the thunderhead beneath our unseen broadsides!

yeah I’m down to play.

Here are some potential wizards, maybe something to focus our thoughts:

What does it look like? Pure evil. All death magic. 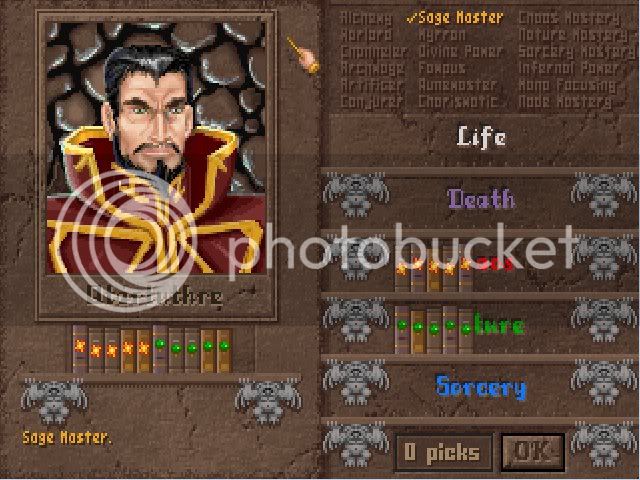 Chaos and nature magic with sage master: good at research.

Life magic with famous, charismatic, and warlord: Good at diplomacy, armies, and heroes.

Starts on Myrror, which means we can choose a weird race and get an extra five mana from our fortress. Chaos mastery for more burning.

I think I want my wizard to be something like

Picking Halfling as my starting race.

To be clear, we are all one wizard. (There can onlybe one!)

I would like to be the minister of silly walks.

it’s all about Warrax or jaer the windwalker…

You want the unofficial patch.

I always thought the rewards from dungeon/lair/ruins were determine on world creation.

Just like your spells, since if you can read the runes in your spell book you can actually find out what spells you are able to research.

You should totally have the Wizard allocated by committee.

Have everyone send you a PM with their one or two picks, and then you allocate those.

I guess web + crack is still the most OP spell combo even in 1.4…

Or a guardian spirit with Lionheart, invulnerability and a few other select spells to make it impossible to resist at the start.

Lots of great ways to play the game!

You should totally have the Wizard allocated by committee.

Have everyone send you a PM with their one or two picks, and then you allocate those.

You know what? Let’s do it. I can’t think of a better way. Let’s get collaborative!

So, everyone: post (or PM, if you want to keep your picks private) two spellbooks or one special ability for our wizard, as well as a vote for a race (if you don’t care about race, you don’t have to vote for one). I’ll update the first post with our progress, so you can check it out. This build-a-wizard process will end at 6PM PST, at which point I’ll fill in any blanks left, and we’ll have our wizard!

This would also be a good time to post preference on map size (small/med/large) and difficulty level(intro/easy/med/hard/impossible).

P.S.
You can vote for a portrait as well. Otherwise, I’ll choose one that I think fits our abilities.

I’ll throw my two picks into Myrran and hope someone else adds the third.

I’ll put one of mine in Myrran, sure.

I always liked taking (I think) alchemy, since it gives magic weapons by default, and the 1-to-1 gold conversion can be really handy in a pinch. I don’t really care about spell books though.

Race-wise, I’ve always liked the Klackons, cause I love me some stag beetles. The standard fantasy races get a little boring after a while. With the notable exception that we could pick dwarves and continue to QT3 Dwarf fortress forum play (at least in spirit).

I haven’t played in a while, so I don’t remember exactly what the map sizes feel like.