I can say in the game I’m doing in the closed beta, the AI is building mid-game units that are on par with my best stuff, and casting terrifying spells in combat (he opened one battle by Distengrating my Basilisks and proceded to Doom Bolt and Warp Lighting to very nasty effect the rest of the fight) . They have a lot of cities, lots of units, and are casting and maintaining powerful enchantments. This is me playing on Easy, by the way. Is the AI good? I can’t say, I’m not good enough at these kinds of games to find and use exploits so the AI always feels like a fair challenge I can eventually overcome if I’m patient and don’t mind making judicious use of the Spell of Rewind (Load Game). I have a feeling if I never save-scummed, I’d lose more often than not, however.

And easy I assume is the easiest difficulty setting, right?

It is, yeah. I’m not sure what “Easy” governs, as the stats and abilities and numbers and everything are still the same, and you can independently set how powerful (or weaker/less rewarding) neutral and magic node sites are. In this game on Easy you get 12 picks to customize your character, 1 more than the default number from the OG game. Presumably the AI is playing with some caps/restrictions on Easy, but I’m just speculating there.

Smart, that guide is a cracking good read. 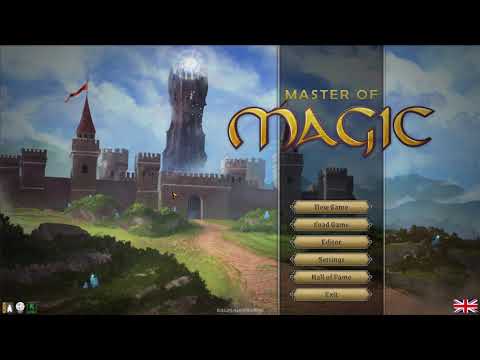 Doing well in MoM at least classically is abusing the weakness of a nation early on. Originally it did respect turtling a bit (waiting for a mega spell like Tauron, Wraiths, chain-casting Cracks Call, or something) but with the new AI and fundamental changes (double movement) you probably have to lean toward resource dominance.

Basic gameplay is like Age of Wonders right? You get control of resources and build troops and such by building up cities?

Yep, though it’s strange to see some ask if Master of Magic is “like Age of Wonders” because AoW is a spiritual successor to MoM, heh.

I’ve watched 3 or 4 videos of the press release demo, the maps look different each time, am I to assume they’re procedural and different every time?

Enjoyed the first installment, especially the details around combat, that was particularly interesting.

The original MoM had MtG spell names and effects. Seriously.

Check out the spell list. It even uses the same 5 colors + artfacts.

The following is a list of all 214 spells in Master of Magic.

You are blowing my mind! I did not know this, and have a hard time wrapping my head around it, considering the massive amounts of time I’ve spent playing the original :-)

I seem to remember first hearing about this MtG tie in (it was a selling point for the game) in a preview in PC Gamer or other magazine back before it came out.

Starting position is very important, so I hope they introduce various map options, not just number and strength of nodes and independents but some control on spacing between start positions and also a “balanced start” setting.

I hope the improved the AI. That was one of my biggest gripes about MoM. Also the heavy, heavy anti-player bias. I really did not like that in the original MoM.