After McCain criticized Obama for stating his willingness to hunt Al-Qaeda inside of Pakistan, he was suddenly faced with a little problem… somebody asked Palin whether we should cross the Pakistan border.

If that’s what we have to do stop the terrorists from coming any further in, absolutely, we should.

McCain’s response? If you want to know Palin’s position then ask me, not her.

In all due respect, people going around and… sticking a microphone while conversations are being held, and then all of a sudden that’s—that’s a person’s position

So precious. Vice-presidential candidates should be seen and not heard.

What’s hilarious is they hide her down in Pennsylvania, and she can’t help but make a gaffe while getting a cheese steak.

Golly, I hope she got the right kind…

You’re so right, it’s not as if Biden has never contradicted Obama, is it? 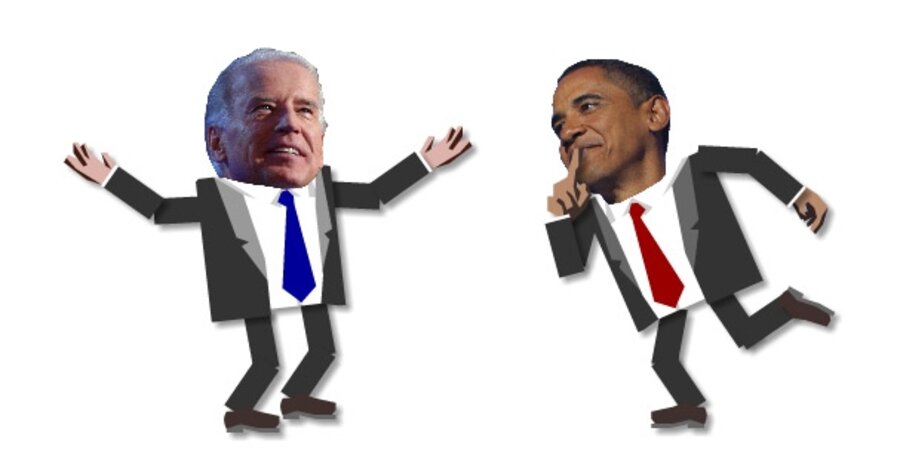 A woman, identified as part of a “clean energy organization,” questioned Biden about his support of clean coal technology when solar and wind technologies are “flourishing.”

The woman followed, “So will you support wind and solar and alternate technologies?”

Biden wasn’t done yet. He was on a roll.

“China’s gonna burn 300 years of bad coal unless we figure out how to clean their coal up because it’s gonna ruin your lungs and there’s nothing we can do about it.”

“No coal plants here in America,” he said. “Build ‘em, if they’re gonna build ‘em, over there and make ‘em clean because they’re killing ya.”

Everyone seems to appreciate Biden’s candor — except his own campaign. The problem is that Biden’s remarks contradicted what Obama said at the Democratic National Convention only a month prior.

“As President, I will tap our natural gas reserves, invest in clean coal technology, and find ways to safely harness nuclear power,” Obama said during his acceptance speech.

Maybe Joe Biden needs to spend some more time with the top of his ticket, as Sarah Palin does with John McCain. In recent days, Biden has muddled or contradicted Barack Obama’s positions on several issues, saying that the federal government shouldn’t bail out AIG, that the rich should pay more taxes “to be patriotic,” that the Obama ad making fun of McCain’s computer illiteracy was “terrible” and that he and Obama “are not supporting clean coal” plants in the United States. As Newsweek blogger Andrew Romano wrote, someone from the Obama campaign “should give the guy a good talking to. If he or she can get a word in edgewise, that is.”

You’re so right, it’s not as if Biden has never contradicted Obama, is it?

The contradiction thing? Hey, a little embarrassing, the off-message thing can be a nice little talking point for a few days for the opposition. It happens.

Not the issue here, either.

Please show the quotes from Obama where he decries those who would dare ask a question of his running mate.

Thanks and good night.

I kind of agree with McCain that the culture of asking questions of everyone and every response they give being set in stone as “The Position” they hold makes it kind of impossible for real reporting to occur. You can’t get a sense of a person’s ability to come up with ideas because they aren’t allowed to say anything they aren’t already sure of or they’ll have to “flip flop”. Which is also why “debates” tend to be talking point-offs instead of actual discussions.

The contradiction thing? Hey, a little embarrassing, the off-message thing can be a nice little talking point for a few days for the opposition. It happens.

Not the issue here, either.

Please show the quotes from Obama where he decries those who would dare ask a question of his running mate.

First off, given we only have a out of context quote above, I don’t see McCain decrying questions being put to a candidate. Nor do I see McCain saying don’t talk to her just talk to me. I think everyone knows that is going to happen (reporters questioning candidates). I think the point is the press jumping on these things when they are bound to happen.

That said, Obama slapped Joe down rather quickly:

Barack Obama slapped his loose-lipped running mate Tuesday, chastising Joe Biden for speaking too fast and contradicting him on one of the massive financial bailouts.

Biden, a Delaware senator, declared last week the federal government should not have floated the American International Group an $85 billion lifeline.

Obama said the feds had no choice and hit John McCain for opposing the AIG rescue one day, then backing it the next.

Tuesday, Obama had to deal with fallout from Biden doing a similar dipsy-doodle, first denouncing then agreeing with McCain.

“I think that, in that situation, I think Joe should have waited as well,” Obama said on NBC’s “Today” show.

So should we now assume that Biden shouldn’t say a word without checking with Obama first? How dare he censor his running mate!? :)

Thanks and good night.

The pres-veep disagreements are mildly amusing but not unprecedented (see “voodoo economics”).

It’s not a simple disagreement about policy positions. McCain used Obama’s position on cross-border incursions into Pakistan during the presidential debate as a cornerstone of his argument that Obama is too naive, too inexperienced and lacks the statemanship needed to become president. If you accept that argument, which presumably McCain must, the same reasoning dictates that his own vice-presidential pick is unsuited to become president also. You can’t have it both ways.

What’s hilarious is they hide her down in Pennsylvania, and she can’t help but make a gaffe while getting a cheese steak.

Golly, I hope she got the right kind…

Can we get some more details about what kind of sandwich she ordered? I’m guessing she was at either Pat’s or Geno’s. Geno’s would have perhaps been the better choice considering the ownership’s penchant for controversy.

They do make a great steak, though.

This mistake was made right after answering a question about how well she though McCain did in the debate, wasn’t it? It seems like if she had actually watched the debate (and/or understood it) she would have been less likely to make this error. Do her handlers have to write down her opinion of the debate as a talking point as well?

Did she have wit’ or wit’out?

As a Philadelphian, I can assure you that she was in for a taste abomination either way. Pat’s and Geno’s have the foulest cheesesteaks in town. Most of us greatly prefer the steaks from our local trucks, but if you need a B&M establishment then there are good rankings here and here.

Yeah, but you guys think cheez wiz belongs on top.

As a Philadelphian, I can assure you that she was in for a taste abomination either way. Pat’s and Geno’s have the foulest cheesesteaks in town. Most of us greatly prefer the steaks from our local trucks, but if you need a B&M establishment then there are good rankings here and here.

A steak from a local truck? Hard to believe. I ate a lot of those at UPenn, Drexel and Temple, and they’re cheap, but not what I would choose to eat if I had a choice. Pat’s and Geno’s serve up a completely acceptable sandwich, though if I’m on that block I’ll usually eat at La Lupe’s just down the street from Geno’s. If you can time your visit to Pats when the fresh rolls come in from Vilotti-Pisanelli (about 3 times a day), that’s a pretty good time for a steak. I think that VP maybe got bought out a few years ago, so I’m not sure if the rolls are still as good.

I lived in Queen Village for 6 years, and I can tell you that truck food just doesn’t measure up. While I haven’t eaten at many of the places listed in the first top 10, some of them seem a bit suspect. Sonny’s and Steve’s are nothing particularly special. Jim’s is ok, but more for the one guy at the grill with the Popeye forearms than the actual sandwich. Delassandro’s I’ll give you, though I’ve never eaten there, I’ve heard nothing but good things. Tony Luke’s is strong, but if you’re at Tony Luke’s, why would you be getting a cheese steak? The roast pork is a far better sandwich. Similarly, DiNic’s is where you want to have lunch in the Reading Terminal, and again the roast pork - something must have changed for Rick’s to even be mentioned. I’m sorry I never made it to John’s Roast Beef, but I could never make it over there when they were open. Seems like I missed a great sandwich.

People who put down Pat’s and even Geno’s are the type of folks that tell you some currently hot game is shite just because it’s currently a hot game.
:-P

Pat’s is King of Steaks.

I agree that most of the truck steaks are forgettable - although in my opinion they are still usually better than the gelatinous dreck I was served one night on Passyunk. But every so often you find a gem, and everyone seems to have found a different one that they rave about. My favorite is near U Penn, on 38th and Woodlawn, run by a Greek couple. I’d rate their steak up there with the best of the restaurants.

By the way, Rick’s at Reading Terminal was recently evicted… Don’t mess with the Pennsylvania Dutch!

After a recent visit to Philadelphia, I can conclusively say that the best place in town to get a cheesesteak is Jersey Joe’s in San Carlos, CA.

After a recent visit to Philadelphia, I can conclusively say that the best place in town to get a cheesesteak is Jersey Joe’s in San Carlos, CA.

Holy crap, I go there all the time. I always thought it was pretty good, but I’ve never heard anyone rate it above the places in Philly. You can’t get cheese whiz there, for one. Maybe that’s a good thing though.

Well, I’m willing to admit that I probably know nothing about cheesesteaks (never having had one outside of Texas) but they rank among my least favorite sandwiches evar. And when I hear about how cheez whiz is supposed to be a vital ingredient, it makes me even more suspicious of the whole enterprise. But then, I like things that taste good, so maybe I’m not the target audience for a sandwich made from beef of dubious quality and cheese-like petroleum derivatives.

Honestly guys I hear what she’s saying, just back off she’s new