I hate wearing headphones for long periods of time and I am lucky that I have a great PC sound system which I can turn quite loud. I have been using a Blue Yeti which has been acting up so its time for it to go. I do have a issue that the microphone picks up the gaming sound and bugs my friends even using PTT only. I am thinking of just getting microphone that clips around the ear and goes in front of my mouth, not a headset with speakers. Hopefully its a dynamic mic which I heard cuts down on ambient noise.

Does such a thing exists? if not thinking of going with the Rode NT USB and keep my volume turned down. Any other ideas?

yeah I just ordered this fancy thing, hasn’t arrived yet. 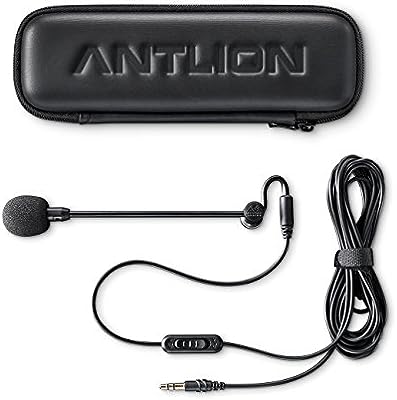 attaches to a headset thought.

You can get a zalman one for $8

I have a ModMic and it works great, can easily recommend.

A cheaper alternative but reviews are kind of bad: 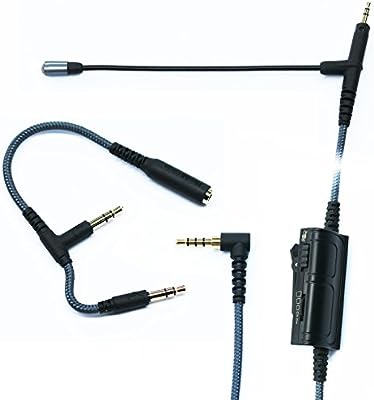 ModMic looks good but what do you attach it too if you don’t wear a headset?

have been using a Blue Yeti which has been acting up so its time for it to go. I do have a issue that the microphone picks up the gaming sound and bugs my friends even using PTT only.

Have you tried playing around with gain?

Not just gaming… My wife does not like using a headset for online chat or web conferencing and has asked me about a boom mic with no headset so this thread is timely. As an alternative, she might be okay with a desk mic. How long did your Blue Yeti last? I was also looking at the Blue Yeti Nano as its a little smaller and would tuck away a bit better. Does anybody have any experience with the Nano?

If y’all aren’t gonna use headphones but rely on speakers get a snowball rather than a yeti. The yeti’s sensitivity is well-documented.

I’ve had my Yeti for a few years. when it works I like it. I would buy another Blue if this one hadn’t started acting up. I found the type of headset I wanted, kind of. They are called Ear Hook and are on Ebay. The only issue I have is they’re under $10 Canadian including shipping from China. I really don’t trust them to be very good. Found a brand in the $250 range but that’s way out of my budget.

What’s your Yeti doing? I’ve had mine for years and after tweaking a bit it’s been golden.

It quits working. Lights stay on but until I get a message your mics not working I wouldn’t know. I have to unplug it to get it started, I have replaced the cable.

Does such a thing exists? if not thinking of going with the Rode NT USB and keep my volume turned down

Can’t recommend that, it’s basically unusable for gaming. You have the options of:

It does not help that the windows 10 USB sound drivers are optimized for headsets with dynamic mikes, and just have one control with far too little dynamic range for a condenser mike. The usable range of the gain setting is something like 90-95, out of a 0-100 scale.

The Yeti has a well known weakness with the connector becoming broken. Read the Amazon reviews for people with the issue. Not the cable but where it plugs in becomes loose and broken from how it flips.

Some of you twitch or do other types of streaming so I can understand the dedicated microphones. But for just some online gaming, why not get a decent headset. Use as needed? It is an absolute cinch to swap windows 10 input and output destinations for sound, even with multiple devices. Many are already noise cancelling and there are some that are extremely comfortable to wear.

For me the issue is I don’t like wearing headsets. They are uncomfortable and bug me in a short period of time. I guess the issue is I have a large (mostly empty) noggin. Maybe if I could find a headset designed for a big head that could help. Is there any such animal out there?

A few depending on your type. For longer play sessions you’ll want a big ear cup, preferably around-the-ear, but also one that is breathable or won’t kill you on heat. You will also want to know your answer for a couple of questions. Do you need to hear ambient noise (aka your wife talking to you,) and you do want wired or wireless?

In the past the cream of the crop for big noggins used to fall under Sennheiser, with a lot of other brands competing (Razor, Turtle Beach and even Logitech.) Today things have changed a bit with HyperX and SteelSeries being really good choices, while those others are still in the mix.

I use a wireless SteelSeries Arctis 7. I have a big noggin. The ear cups are extremely soft, sit around my ear and breathe fairly well. The whole thing sits on something of a stretchy sling underneath a metal outside frame on the top of your head. So it floats, per se, and has some give due to the fabric they use for that under-sling. Since I have a large noggin in width, I had to very slightly pull the metal shell a bit straighter when I first purchased it, but it works and fits fantastic since that point. It is amazingly comfortable and though I feel the weight a bit, I can wear them for very long sessions and not notice. They do lock out noise, however, and it annoys my girlfriend who likes to talk to me out of eyesight as though I would love to carry on the conversation with her about which coworker is backstabbing more than the others. The mic is decent. It is retractable. It’s not a standalone boom mic level of awesome, but my buddy tells me my voice sounds close to normal and fairly deep.

I’ll contrast that with a Plantronics, 655 “gaming” headset that I wear for work. It is an on-ear headset, clampy, hot, and I end up taking it off a lot. But man does it have a fantastic mic.

In short, there are a ton of choices. Gaming headsets have literally taken off to become a thing with enough vendors that there are some great ones out there now.

Thanks for the info. I will try some on to see how it goes.

I will try some on to see how it goes.

I’ve been in your shoes. If at all possible, see if you can find a place to do that somewhere for sure. And if not, see if you can buy from somewhere with an open return policy. Don’t get stuck with something you can’t use for long periods at once.