Those screenshots are amazing @Editer

I went back and did the bush trip through the Sierras that I started but never completed when the game first came out. The later parts of it through the canyons is amazing.

Had an odd graphical glitch on what I assume is supposed to be half dome. Was slightly tempted to try and fly through it but thought better of the idea.

This is what they meant by follow the road, right? There are a number of points where you can fly through a canyon where the road you are following is up on a ridge.

Unfortunately all my screenshots are washed out because I play in HDR. Does anyone know how to get proper looking HDR screenshots?

What are you using for screenshots? I’ve never bothered to get HDR running on MSFS (I should, my insane monitor supports it), but I understand the Windows Game Bar saves two screens if you’re in HDR mode, a JPG for SDR viewers and a JXR for HDR viewing.

I’ve tried F12 in Steam and the nvidia geforce panel. The Geforce panel has an option to take the shot in HDR, but the file format isn’t a standard and doesn’t post here.

I lost the railroad somewhere along the way heading north towards Yakutsk. I believe a rail line I was following just ended. So I kept going North until I found a river, and started following the river north.

Of course, rivers don’t behave like railroads. They meander. A LOT! 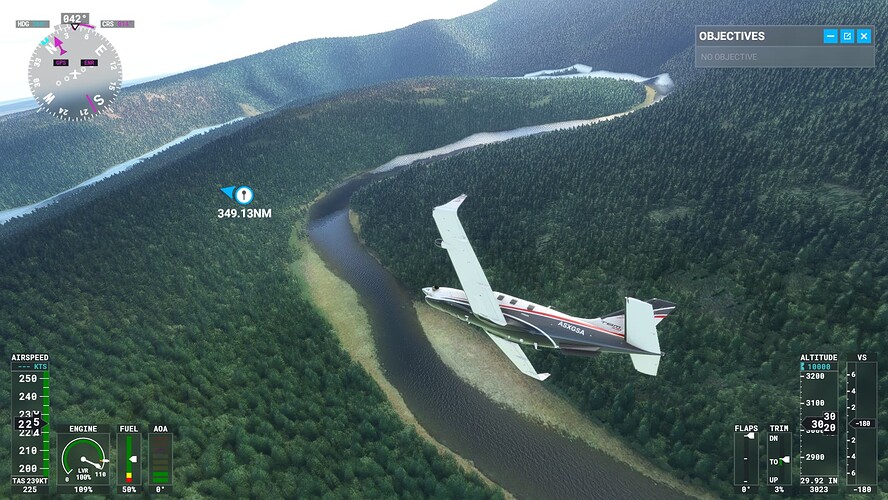 And sometimes they freeze over, especially here in Siberia. 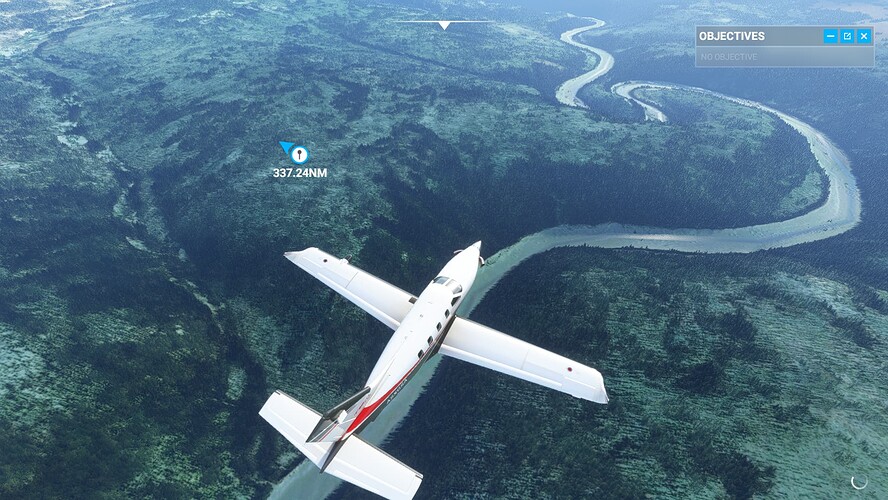 I haven’t seen any human civilization for a while. Hopefully somewhere along the river there will eventually be humans!

Thrag, try the MS Game Bar. It has specific support for HDR. (Windows-Alt-PrtScn to capture a screen.)

I haven’t seen any human civilization for a while. Hopefully somewhere along the river there will eventually be humans!

They found Rock8man there years later. Bearded and showing signs of paranoia, he had no idea of anything that had happened in the 40 years since his emergency landing. He did not believe the pictures of the moon colony, nor did he believe aircraft were now electric powered. But his biggest shock and one he refused to accept was that the current and also oldest of the female Presidents of the United States was Brittany Spears Rogen.

The world celebrated his finding and he was awarded celebratory dual citizenship in Chinastan where he was deemed a backwoods hero.

They found Rock8man there years later.

Those were two terrific stories.

I read that story of the family on the taiga several years ago. Kind of amazing to think how they survived that long. Rock8man’s journey keeps reminding me of that story.

I loved President Britney Spears Rogen. What a ridiculous amount of exposition packed into those 4 words. And honestly, quite plausible.

I thought the same. In a world where weed eventually becomes legal, Seth could pull it off as First Man.

Thank you. That takes great screenshots. Did a little hop from Reno to Truckee as the sun was setting just now. The “live weather” is a lot prettier than the actual weather. 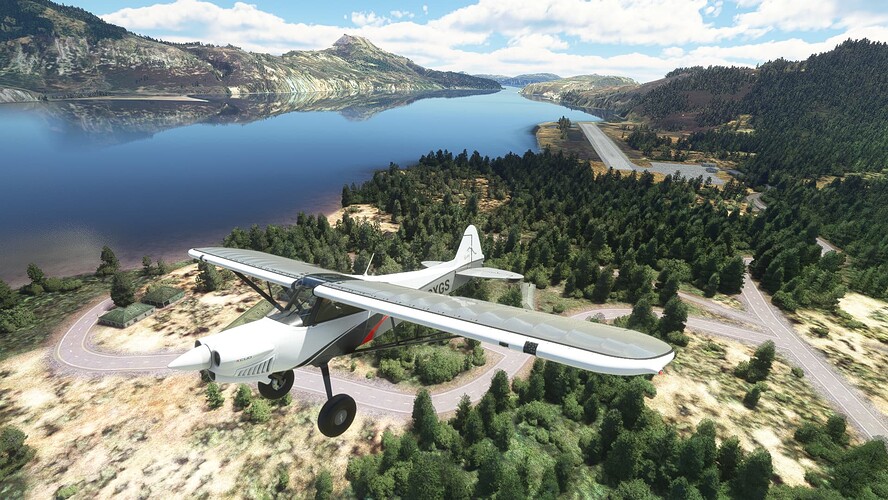 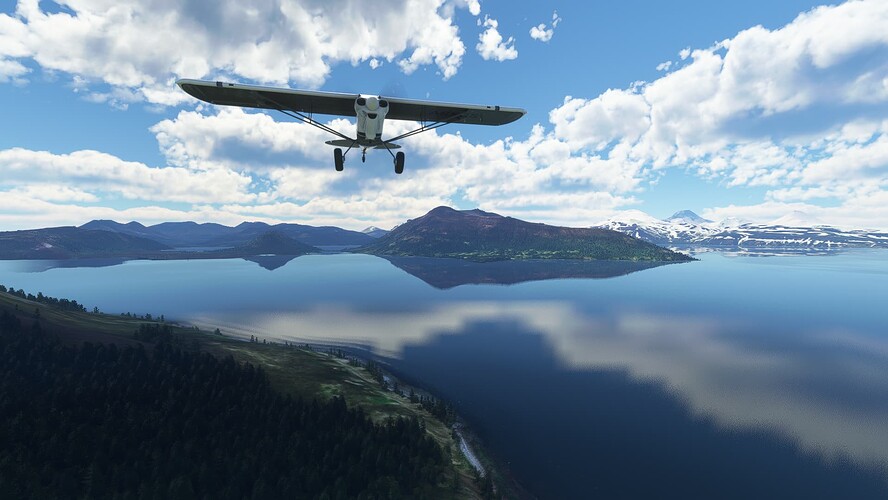 And then I ran out of gas half a mile from the runway because I forgot about bush trips not doing that.

The river I was following turned East and South East. I couldn’t follow that! What if it kept going that way? So I went towards Yakutsk completely without something to follow, like flying over forest without a net.

But I finally found another river, and emerging on the other side of the east west river was a tributary going straight north. And right along with it was starting a railroad. 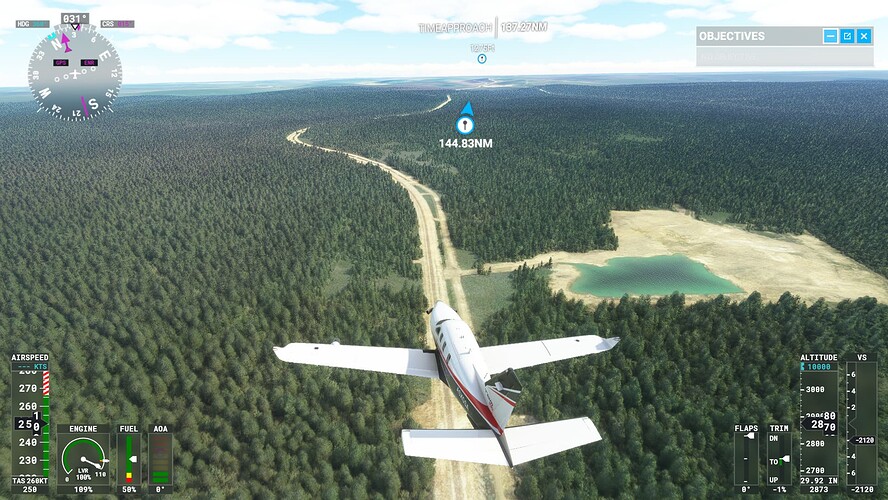 We’re back on target and following the railroad captain.

Interesting small pond/lake there on the right beside the railroad. I see things like that and wonder what they might be used for in real life. Interesting how flat it is as well. Any idea approximately where you are on a map, @Rock8man ?

Looking around on Google Maps. My best guess along this railroad on the way to Yakutsk is… maybe here:

The river I was following turned East and South East. I couldn’t follow that! What if it kept going that way? So I went towards Yakutsk completely without something to follow, like flying over forest without a net.

@Rock8man, you aren’t planning out your hops in advance with Google maps? That’s some true pioneering-spirit flying.

The people who laid down these railroads were the true pioneers! I’m just following their work.

Until I come to the end of the line. Then I have a minipanic and go it alone.