Congrats on getting the NXi integrated!

Congrats on getting the NXi integrated!

Thanks! We’re super-stoked about that. A little bit concerned about when it hits general release and a bunch of folks who aren’t as engaged suddenly have a more complex unit to deal with, but we’re hoping to get some stuff in order to minimize pain there.

Next on the list are the G3000 and GNS units. (Not spilling any secrets there, we’ve been posting progress photos on our discord server for anyone there to see. :D ) They’re coming along nicely. 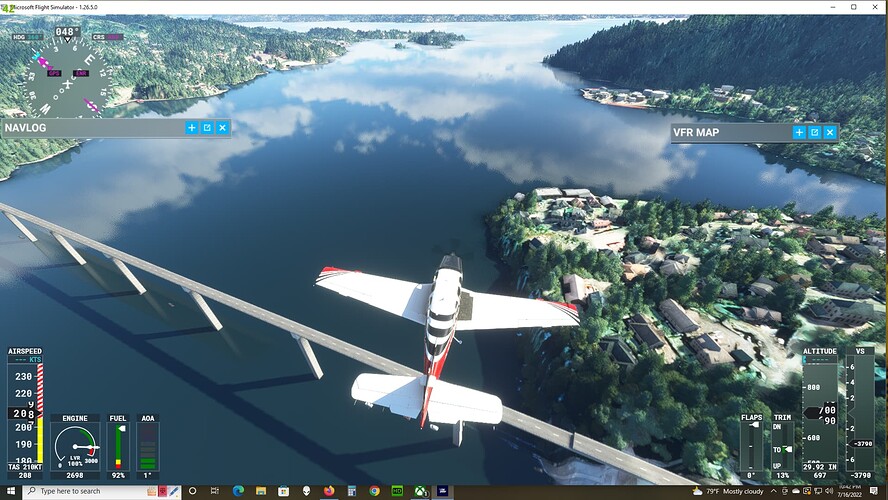 I really screwed up this leg and got hopelessly lost. Oops. 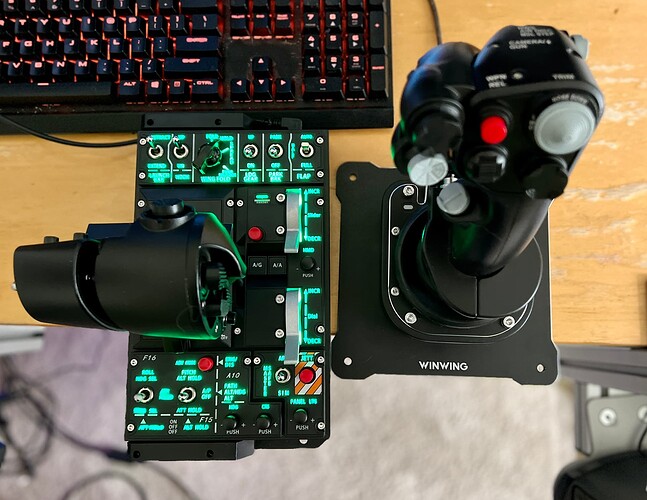 Got a sweet new toy. It’s awesome, but programming a controller that has no defaults at all is bad enough when it doesn’t have like 100 functions. :) But wow, once this is all set up, it’s going to be amazing! (Winning Orion 2 with the F/A-18 throttle and F-16EX stick — the combo with the most buttons!)

Just gotta figure out how to manage the toggle switches that leave a button pressed when flipped. MSFS seems to get confused when a button is “held down” for some functions.

I really screwed up this leg and got hopelessly lost.

In my defense, the descriptions in this leg are pretty terrible. They’re not even trying! No real descriptions of what I’ll be flying over, just a heading and the time, and then what I’ll reach at the end. So when I’m flying around and I inevitably stray from the course a bit, when I try to get back toward the general direction and reach a town that seems to fit their vague description, I think “oh, it must be time now to switch to the next direction maybe”.

I have noticed that Norway is in way better shape than areas that haven’t received a “World Update” yet. The bridges are actually bridges (and there’s a LOT of them), and there’s lots of churches and soccer stadiums and other places that are really well rendered.

I recently visited Sirena ranger station in Corcovado National Park on the Osa Peninsula of Costa Rica. Sirena is unreachable by road, so the visit involved an hour-long boat ride from the town of Drake Bay, about 30km up the coast. So when I got back, I thought I’d recreate the trip by flying from Drake Bay to Sirena.

Here’s a view of Drake Bay, followed by my early morning photo taken from the beach for comparison. 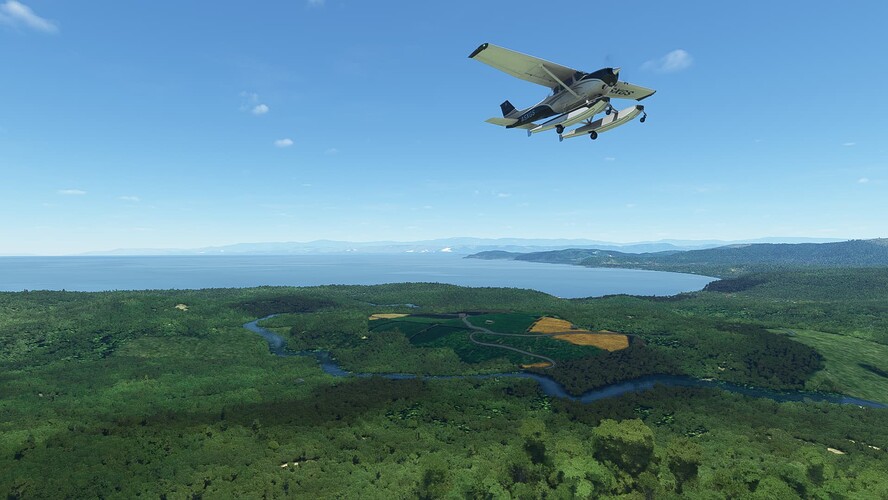 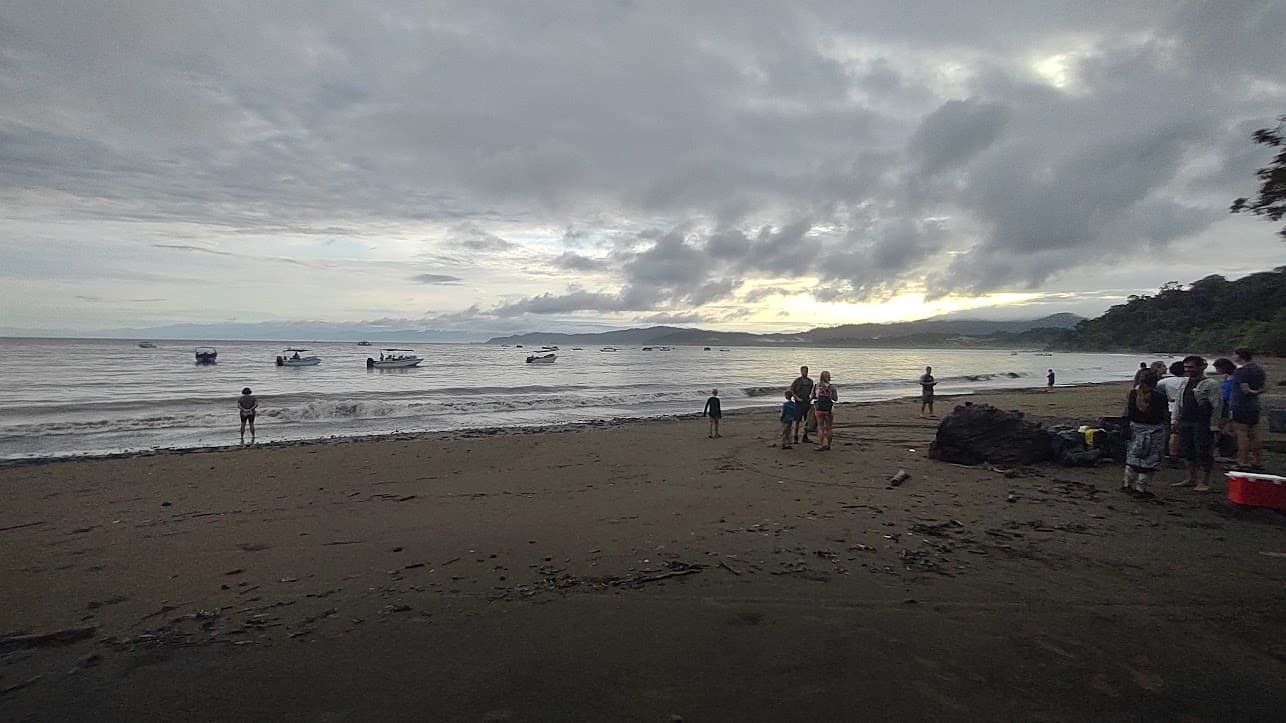 20 minutes of flight over the jungle and the grassy strip of Sirena emerges from the foliage. 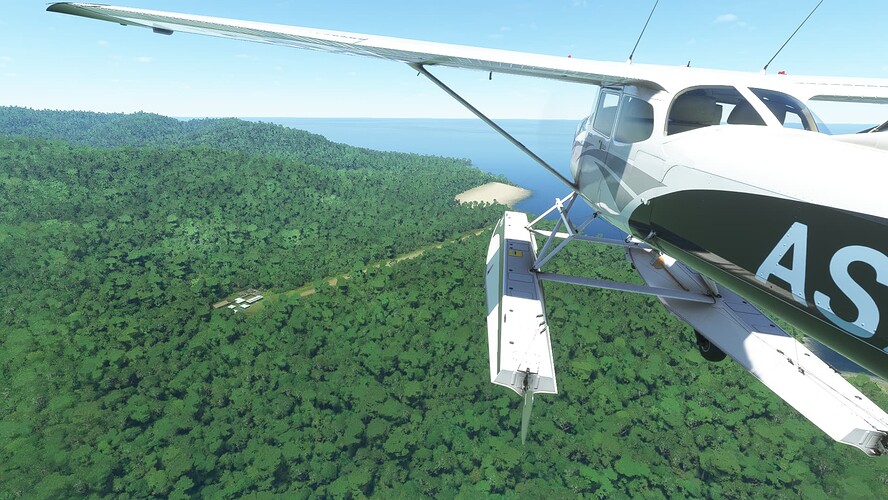 Standard approach pattern put me in line for landing. 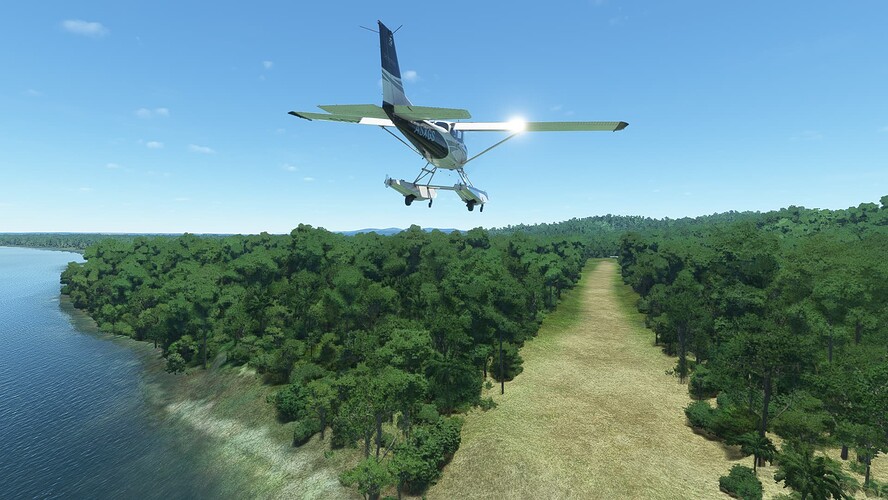 And here’s the aircraft parked at the end of the strip, followed by a photo taken there for comparison. 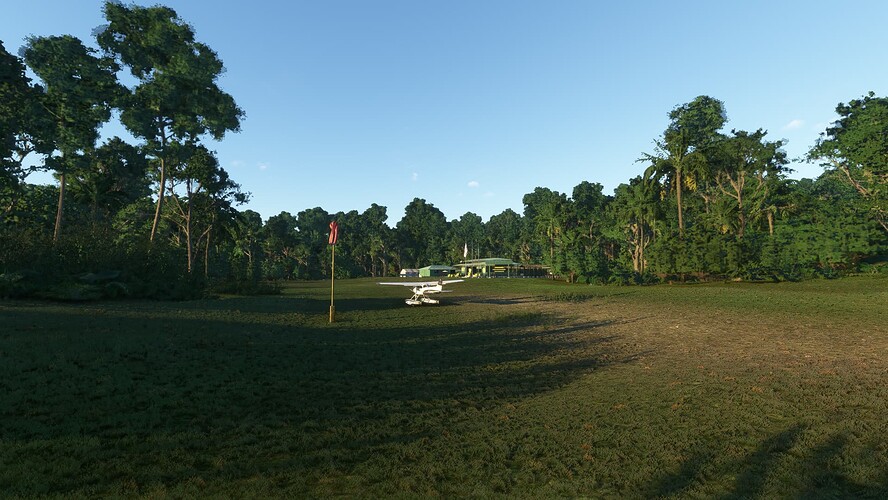 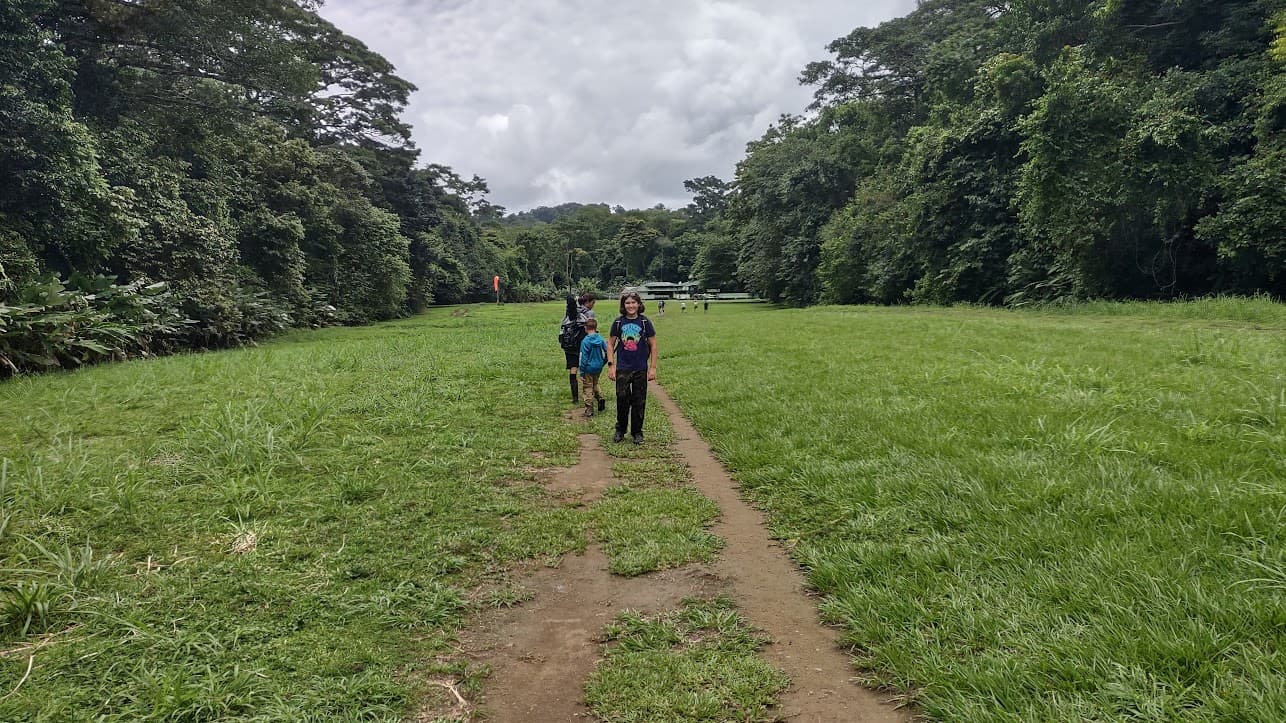 It turns out Sirena airstrip is one of the bespoke detailed airstrips added to the sim. You can really see a surprising level of accurate detail in the sim. This little soccer goal was there in real life. (The sign has actually been moved and updated, but I sadly don’t have a photo of it.) 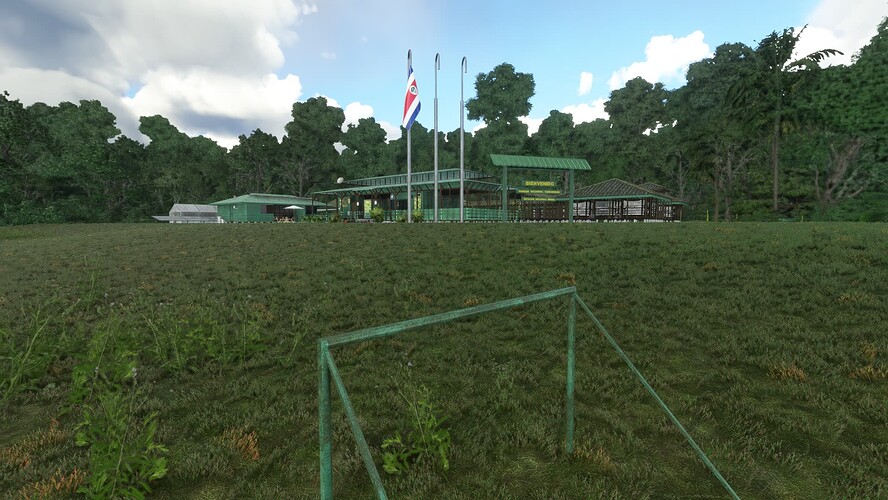 Here’s the ranger station’s front porch in the sim. I left my shoes on the left side of those steps (you can’t wear shoes on the wooden walkways or in the buildings) and chilled for a bit in a rocking chair on that porch before heading back to the boat. You can book a stay here and sleep in bunks surrounded by mosquito nets and eat at the dining hall, all recreated accurately in the sim. You can even zoom in and read the informational signs on the porch. Pretty impressive. 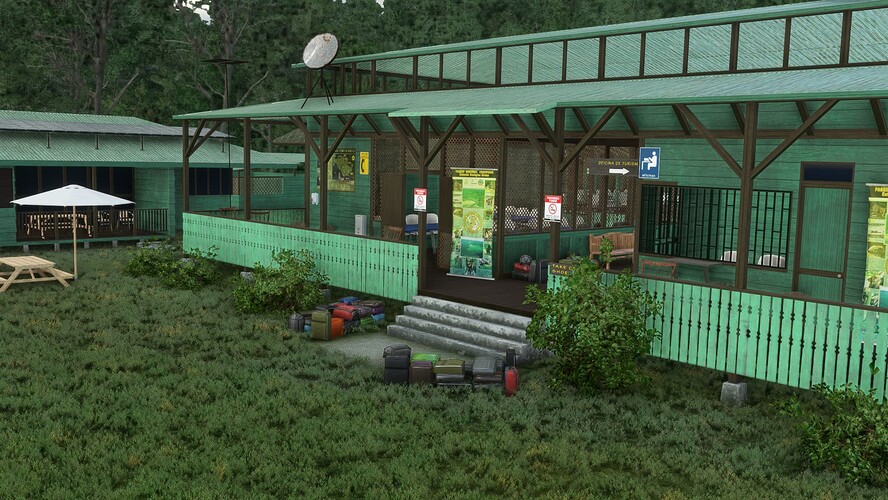 Ironically in real life, the airstrip hasn’t seen use in several years due to liability issues. You can’t fly into Sirena anymore. You have to take a boat or hike in.

That’s so cool. I found that strip randomly exploring the included non-autogen airports and it became a new favorite for playing with STOL planes.

I’ve finally had enough of FSEconomy and have spent the last month selling off my assets. 15m v$ in the bank, not too shabby :)

I’ll probably take a long break from the sim now. I kind of overdid it with FSE, flying the same routes over and over for 18 months. It was fun but hopefully I’ll get back to MSFS in a more free form format. Still have a lot of exploring to do.

Now that is damn cool! Who would have known unless they’d been there. That’s some great attention to detail by someone that put that in.

There have been some thunderstorms for the last couple of days where I live. Figured I might as well try flying in them. I’ve done most of my flying in clear weather, I didn’t know what I was missing. Well, part of what I was missing was severely jittery performance and video artifacts, but aside from that it was amazing. Rainbow effects are modeled. It generated a double rainbow (something not totally uncommon to see here from the ground when rain whips off the mountains). I quickly took a screenshot, though it’s in VR and both rainbows are kind of faint in the capture.

I also have been trying out the VL3 and loving it. So sporty and nimble yet smooth. It feels like the Miata of planes.

Man, I’m really itching to get back into MSFS but I’m trying to wait till SU10 is properly out.

That’s not until late August though, isn’t it?

Myself, I actually bought a GA aircraft! The Carenado Cessna 337 Skymaster. It’s a lot of fun to fly. Annoyingly floaty on landing and you need a long approach to bleed off airspeed, but I’m really pleased with it. I feel Carenado’s reputation for style over substance to be rather unwarranted, at least as far as the C337 is concerned anyway. Most things work as I’d expect, and you can integrate the PMS50 GTN750 too.

My only real gripe is Carenado only release their aircraft on the official marketplace which is a huge negative, but I can’t fault the mod itself.

That’s not until late August though, isn’t it?

Precisely. I’ll be OK once Two Point Campus comes out, that will tide me over nicely, but in the meantime it’s hard to resist the temptation.

I waited for this week’s patch to try the SU10 beta. It’s pretty solid, but I’m not seeing a real perf boost. Though now my limitation is pretty much 100% CPU instead of a mix of CPU and GPU in SU9.

I also have been trying out the VL3 and loving it. So sporty and nimble yet smooth. It feels like the Miata of planes

If you like the VL3, check out the Vertigo. It’s my go-to when I need a small plane for sightseeing, but I want to get where I’m going quickly. It’s basically a souped-up VL3, but it’s based on a real-life modded plane.

✓ Vertigo is a Microsoft Flight Simulator 2020 mod created by GotGravel. Download for free to enhance your experience in MSFS 2020.

I recently freed my flight setup from the cramped corner desk it has thus far inhabited. Went with an Openwheeler seat and control mounts. Extremely happy with it so far. 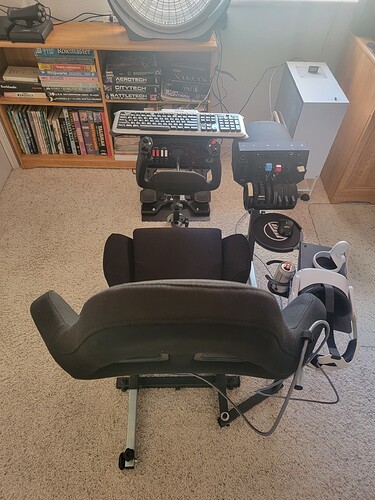 On a different note, trying to use the quest 2 hand controllers for cockpit stuff remains an exercise in frustration. I see people saying you can set things up to use the stick to turn knobs and squeeze to click in the dials that are also buttons but I can’t get any of that to work. I appreciate that they have a turn your wrist to turn the dial interaction but it’s not really usable unless you are satisfied with a setting in the ballpark of what ypu intended. Does anyone have a usable hand controller setup?

Someone really needs to make a g1000 panel of just the buttons and dials without any screens for VR. I see there are prohibitively expensive full blown g1000 simulator with dual screens but I just want tactile controls.

Is that a big fan at the top of the shot, to ruffle your hair in the cockpit…?

Battletech, Citytech, Aerotech. You are a man of fine taste.

That and to keep me cool, plus it helps hold off any hint of motion sickness.

Also in on topic news, I just did the first third of the Patagonia bush trip and that was awesome. The XCub can be tricky to land, and the trip throws some tiny fields and a bit of a crosswind at you in a couple of the legs I did. Very satisfying.

Does anyone have a usable hand controller setup?

My hand on my mouse.