Nice, good job! What a shitty place to land. Which replay mod do you use?

I always say there’s no such thing as a boring flight, no matter how by the book you fly.

Nice, good job! What a shitty place to land.

Thanks! And yeah, landing in those places is actually a fun puzzle sometimes. “How can I line up the best approach in… this?” I heaved a big sigh of relief when I got it down, though, for sure, fun puzzle or no.

Which replay mod do you use?

I’ve been using Flight Replay. It’s not as full-featured as FSPlayground, but it’s also a lot more straight forward to use for “just a replay”. Plus, I like that it actually lets you export your flight data as a CSV so you can analyze it that way, too.

I landed and broke too soon and the plane crashed by leaning forward into the ground.

Oh, one tail-dragger specific tip that I don’t think was mentioned up-thread, though apologies if it was and I missed it. One thing you can do to help fight the nose-over is, once you’re below stall speed, go to full back-pressure on the stick. This helps keep your tail planted, and it’s surprising what a difference that makes in how hard you can brake.

When I’m trying to land super duper short, what I usually do if I’m feeling clever and coordinated enough for it is to touch down, and just as soon as I hear the contact (since it’s hard to feel in the sim) I raise flaps to dump all the lift I can and haul back on the stick while braking as much as I feel safe doing. Usually it’s a lot, in that configuration.

(If I’m fighting a heavy crosswind I’m usually too busy with other things to dump flaps, though.)

Also, one more tip: if you feel like you’re starting to nose over, don’t just let up on the brakes, give the throttle a goose, too. That will help level you back out, assuming you have room for it.

Yes, someone did advise that upthread (back-pressure on the stick), and it mostly does work, but it’s very tricky for two reasons.

First, as you note, you can only do it after you’re below stall speed. If you land hot and are still slowing down and trying not to hit the brakes yet, pulling back on the stick is problematic because you take off again.

Second, on this plane, when you pull back, you’re back to the state as in takeoff, facing towards the sky. On takeoff this isn’t so bad, because as soon as you throttle up, you can see where you’re going, but when you’re trying to land and going left and right, it really sucks to suddenly be facing the sky and not know where you’re going. Lately I’ve started to switch to 3rd person view for this reason. It feels like cheating, but I honestly have no idea how the pilots who fly this thing in real life see where they’re going.

What’s a good way to see some gorgeous clouds? So far I’ve only been low to the ground or in bight sunny days with no clouds in sight. Does the airliner tutorials have beautiful clouds I wonder? Passenger jets have to fly really high in the sky, right?

First, as you note, you can only do it after you’re below stall speed. If you land hot and are still slowing down and trying not to hit the brakes yet, pulling back on the stick is problematic because you take off again.

It feels like cheating, but I honestly have no idea how the pilots who fly this thing in real life see where they’re going.

One thing that can help, if you don’t do it already, is to hit spacebar (there’s probably a controller mapping, too, if not you can create one), which raises your seating position so you’re not quite as blinded by the cowl. It helps a fair bit in the XCub, though what you’re fighting is indeed a real-world problem.

On an extended taxi with enough room you can serpentine, which lets you see where you’re going alternately to the forward left and forward right. Without that, you just have to use your awareness and make a note of where you’re going to go while you can still see it. It’s tricky.

Trent Palmer, who is a rather annoying dude with a cool plane, actually installed a forward facing camera in the nose of his Kitfox and piped the video into the video-in on his G3X. When he’s taxiing he can just watch where he’s going on television. 😂

I’d love to be able to replicate that in the sim. It’d make a lot of people happy.

What’s a good way to see some gorgeous clouds?

Some of the landing challenges have pretty clouds. I think the very first one, in the Robin, had some amazing sunset clouds. One thing you could do, if you’re using real world weather, is to look for places with the kind of clouds your looking for. Live weather is a little flaky sometimes, but more often than not is resembles the real world METAR enough to be useful for something like this.

You can also always generate them yourself by tweaking the weather. There are some additional presets on flightsim.to, in addition to a not-too-expensive commercial package OrbX sells.

I’ll just post again rather than editing that one a second time. I’m working on a METAR-search client which uses the public feed available from NOAA to search for weather. Right now, it will only display the most recent METAR from one or more ICAOs on the command line, but I’m slowly adding more features to it.

(This is a personal project, not a Working Title one, so progress isn’t the fastest.)

Until/unless something like that exists, if you wanted to search METARs you could download the latest bulk update here [caution, direct link to a 1MB CSV], load it into Excel or similar, and filter the sky_cover columns for, say, SCT or BKN at an interesting altitude. 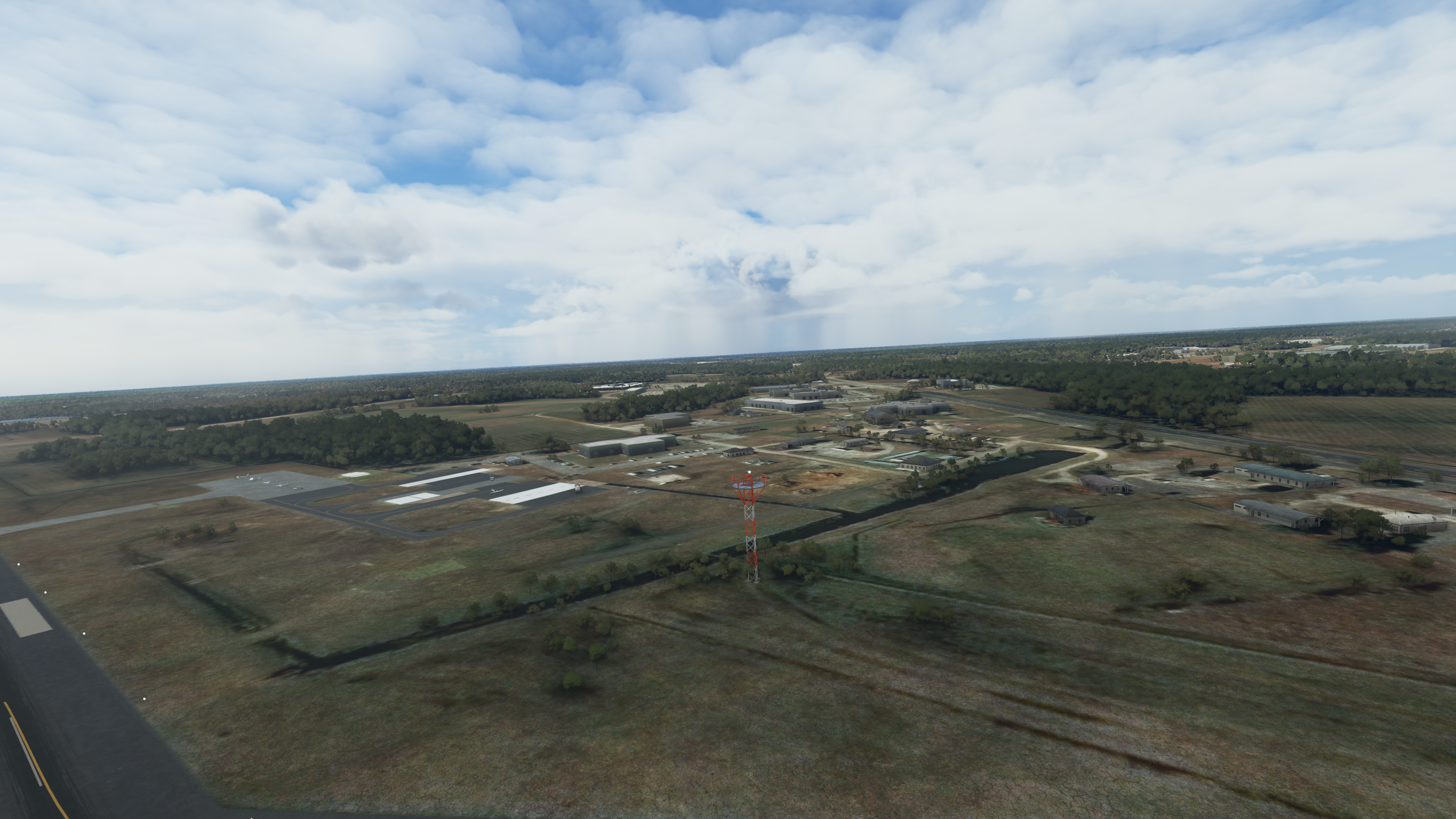 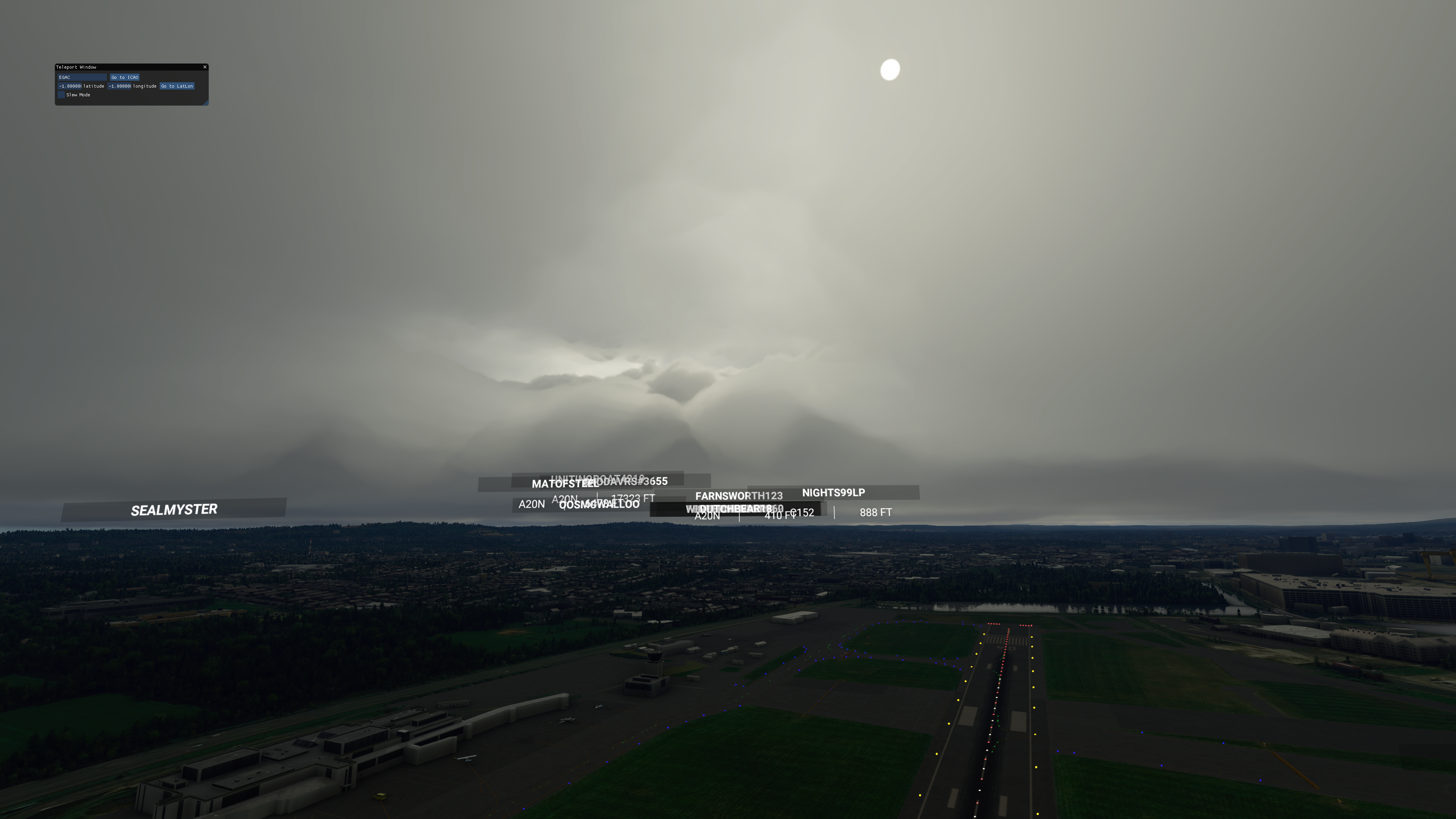 Huh, going by the comparison shots it seems to work just fine! Good job! And well done for getting NOAA data; the author of Little Nav Map really seems to be struggling with it at the moment.

Aeroplane Heaven has released a simple, stripped down Spitfire for free.

I’d grab it quickly; I have a feeling it will go away April 2.

Aeroplane Heaven has been developing software for flight simulation for 14 years. In that time we have produced nearly 60 different commercial releases for our own brand and for other publishers and distributors Worlwide.

There’s an Easter egg in the cockpit. If you can find it, you’ll discover the Spitfire’s roll rate is significantly increased.

Aeroplane Heaven has released a simple, stripped down Spitfire for free.

This is amazing, thank you for sharing! I’ve been looking forward to adding their Mk I to my hangar to go along with the Mk IX… this will tide me over.

Looks like MSFS is winning the 4/1 DLC releases. May I present the sequel to the Savage Grravel, the Savage Obstruction. 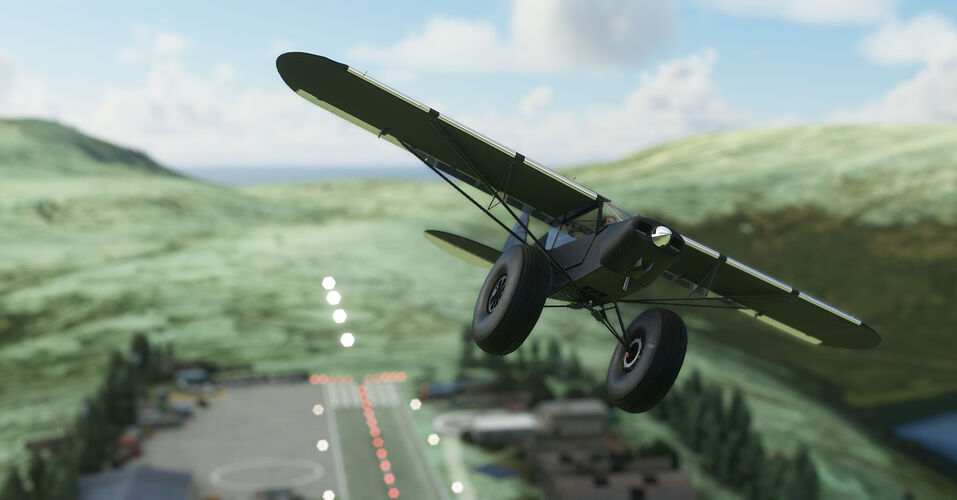 How to install the aeroplane ? Well it is as simple as taking the ah-cardspit folder from the zip and dropping it into your community folder of your Microsoft Flight simulator. Dont know where the Community folder is for your flight simulator ? Click the following link for some help on that. https://is.gd/3NNXol

I did that. I don’t see it within the game. Do I need to do something else that’s not mentioned here? Do I need to turn on Developer mode or something?

EDIT: Ah I see, don’t just drop the folder of content in the zip file. Open that folder too, and find the “ah-cardspit” folder within that folder.

Just checking on your rudder woes. At some point I had to change my rudder controls after a patch; I don’t know what the default is now, but this works for me 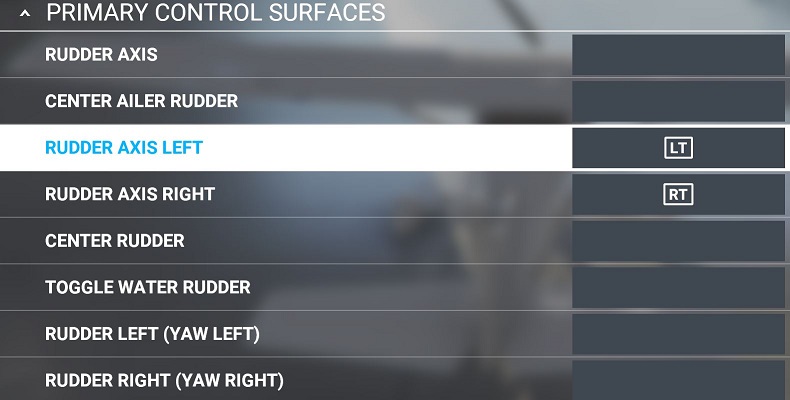 Probably not an issue for you but just in case.

I wish POSCON would get their arses into gear. Almost any time I check there’s never any ATC online. I’ve seen 2 at most, and that was weeks ago.

You guys flying this with an Xbox controller vs. a joystick/yoke have my respect. That’s “hardcore” mode. It’s a shame USB joysticks are still so expensive. I’m really regretting Goodwill-ing my old sticks when I cleaned the garage just before pandemic – I could have at least shared them with Qt3 friends!

I still can’t remember what I did with a perfectly-good T.16000 I had lying around.

I probably tossed it, which is why my mind is blanking it out.

MilViz Corsair is out. Had to buy it as it’s my favorite WW2 fighter (with the P-38 right behind it). 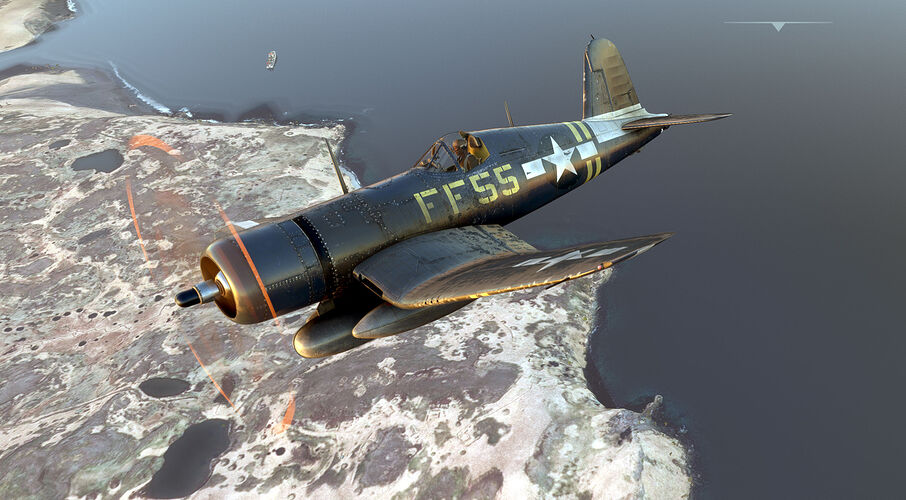 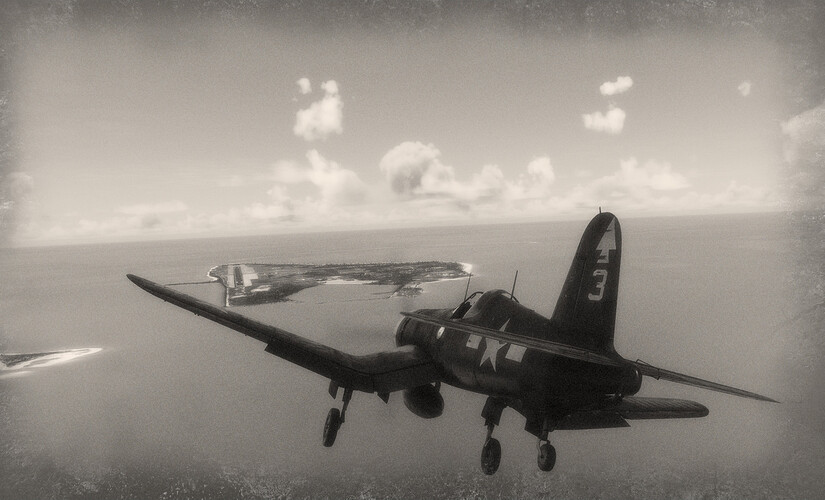 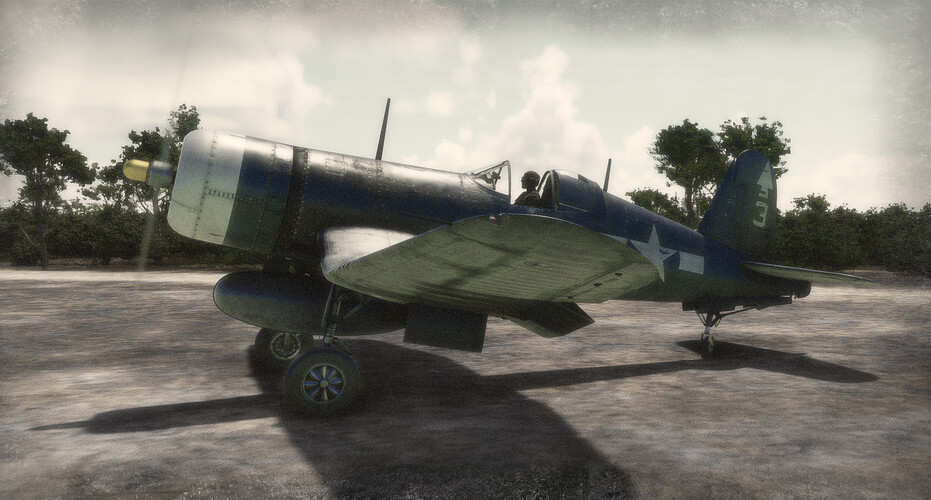 MilViz Corsair is out. Had to buy it as it’s my favorite WW2 fighter (with the P-38 right behind it).

You guys flying this with an Xbox controller vs. a joystick/yoke have my respect. That’s “hardcore” mode. It’s a shame USB joysticks are still so expensive. I’m really regretting Goodwill-ing my old sticks when I cleaned the garage just before pandemic – I could have at least shared them with Qt3 friends!

It’s hard to believe I’ve been playing this almost daily for six months and still haven’t engaged with the ‘sim’ aspects of the game. Due to the intersection of the shortage of sticks plus the (I assume) Brexit-based reluctance of vendors to ship here, it’s been easy to remain on the fence as regards buying a stick/throttle etc. However a quick check this morning shows that there are now some options available, so I’ll have to think about it :)

On another note, I think all the time acceleration grinding in FSEconomy has broken some aspects of the sim for me. I had to do 80 miles in the C172 at normal speed the other day and it nearly killed me.

Some outfit is building it for DCS, I wouldn’t mind getting my hands on that at all. But the corsair was made to get shot at, and its incomplete without angry glowy red balls coming at it.