If you don’t mind me asking, how much tech are you using in your rentals? Do any have the full Garmin suites we see in game or are you standard gauges with not much in the way of GPS, etc?

I do not mind you asking. I am always thrilled to talk about it with anyone. The flight school I’m training at has a fleet of 172s with full Garmin 1000 glass cockpits. My CFI commented early on that I seemed unusually confident in using the G1000. So the sim is helpful in that regard.

Did my second cross-country yesterday - flight from Scottsdale to Prescott to Cottonwood (untowered) back to Scottsdale. Old school navigation with charts and plotters and cardboard E6B. Pretty fun, although I came down hard and sideloaded in Prescott because I’m not used to crosswinds. Also need more practice with the radios. Prescott is also a lot higher than I’m used to (around 5000 feet as opposed to 1500) so my approach was a lot faster.

I’ve never flown a real aircraft, but I have experienced mic fright, because I flew on PilotEdge for a few months a while back. Even in a flight sim, my hands would get sweaty as I rehearsed talking to the controller, and I’d write nervously trying to copy down my instructions to read back correctly. I can’t imagine doing that while piloting a real plane. Simulating is as close as I’ll ever get.

Ha! I must try PilotEdge - that sounds really useful. Except for the most basic calls, I still recite most of mine at least once before pressing the mic button. We used flight following yesterday for my x-country, which was pretty cool.

The flight school I’m training at has a fleet of 172s with full Garmin 1000 glass cockpits.

One thing I love about the 172 that doesn’t reflect as much in-game is how gentle and easy to handle it is. I felt like I was flying an old Oldsmobile my grandma had. Very predictable. Glad to hear they have the new stuff to do training on that (more when the time comes I’m sure.) I’ve heard it’s a supplemental ground school item but this is from someone that got PPL a few years ago. I have no clue if it’s now required to know or not.

That flight you took was probably crazy scenic. How close to Sedona did you get and were there any fantastic things you actually had time to see while you were up?

As for crosswind, that has to be tough. I was fortunate we didn’t have a lot of excessive wind in Western NC, too many trees and hills. In real life a heavy crosswind would probably scare the crap out of me.

The scenery in this part of Arizona is pretty amazing. Mountains and desert and a lot that isn’t very populated. We were using small towns as way points. There’s a good mix of altitudes also to get used to that kind of experience. To get from Prescott to cottonwood you go from about 5000 feet to 3000 feet, but there’s sort of a mountain in the way that the charts show as 8000 feet. So we went north to a VOR fix to avoid it which brings you on a nice approach to cottonwood, but it’s a pretty quick descent. The entire flight isn’t much more than 15 minutes.

To answer your question, Sedona is only a few miles east of that. We talked about stopping there, but it’s already almost 3 hours of flying. Sedona is supposed to have a pretty cool approach though so I’m sure I’ll fly there sometime.

Sedona was the airport in-game for the initial tutorials I believe. I had to go back and look at it once I had VR but it needed a bit of a scenery update to show all of its glory.

I’m glad you’re pursuing your PPL and really wish you a great time doing it. As mentioned, if I was younger I’d probably go back and get back into it myself. I hate that I didn’t do it when I was younger with more time, money and dedication to it.

Damnit! Now I have no excuse.

I mean, I’m too old to be a professional pilot, but I have the money, and I’m having fun with it. I’m on a wait list to join a flying club, so I think it will be fun to take friends up to sedona or whatever for lunch. I may have mentioned that a few weeks ago a coworker and I took a Friday afternoon off and flew to Payson for the proverbial $100 burger (he’s a pilot and belongs to that flying club).

I didn’t realize that sedona was where the tutorials took place. I’ll have to take another look at those.

Last time I was in the neighborhood ~10 years ago I saw Sedona and Cottonwood from the ground. That is gorgeous country. If I’m ever out that way again I’ll pick up the rental/fuel and burger if you’re still up to ferry someone for another burger. Hah!

I’ll take you up on it. Wouldn’t be legal for you to pick up the tab but I’m happy to split the cost. Of course that’s getting a little ahead of myself. You wouldn’t want to get in a plane with me now, believe me.

You have plenty of time, I need to plan another trip out there. I also need to fly in-game out there again and see what changes have happened since release.

There’s a mesh/texture download on Flightsim.to that adds more detail to Sedona, but honestly, I thought it looked good enough in the default sim. Fly around sunset.

Couple of beautiful and inexpensive (around $18 and $10) 1930s planes up on SimMarket right now, a Ryan and a Caudron. The Ryan’s one of the best looking planes I’ve seen in MSFS, and the cockpit detail on the Caudron is beautiful.

The Ryan has become my go-to VFR low-and-slow plane. The Caudron is really cool (and only about $10!), but the cockpit is so tight in VR (realistic, it’s an air racer) that it’s a bit less pleasant to fly as frequently. Still a cool piece of history to see recreated, though!

They look fantastic; I may have to pick up that Cauldron :O

Question for the more learned: on the navmap in the Garmin, you can zoom the map using the mouse wheel as follows. Is there a way to map this control to my stick/throttle? I can’t see that there is. 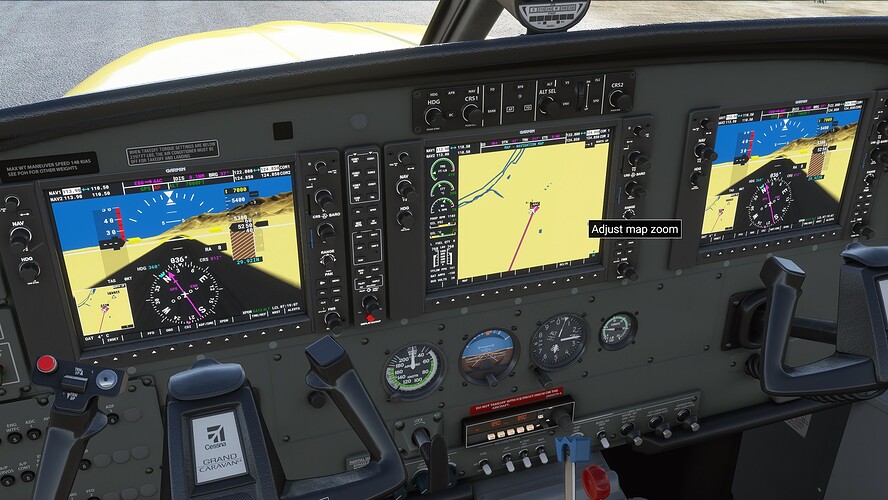 In other news, I’m still caught up in FSEconomy. Grinding out the v$ -_-

At the moment I don’t think any of the Garmin controls are mappable. It’s in the roadmap and I think they said it would be soon in the recent Q&A.

Incidentally, @kaosfere, talking of Garmin mapping and zooming the map, it would be nice if it were at least togglable for mouse wheel down to zoom out rather than in. Presumably this is a function of the logic of down being anti-clockwise for knobs in general, but if there’s some way to make an exception for map zoom that would be much more intuitive.

Ah, that’s a shame. Thanks, GY

Is there a way to map this control to my stick/throttle?

Not without using external tools, because there’s not an exposed control mapping for it. However, if you weren’t averse to spending a little bit of money you could accomplish this fairly easily with Axis and Ohs. (There may be other tools that do something similar, but that’s the one that I know a lot of folks use for things like this. It’s a real control interface Swiss army knife).

Incidentally, @kaosfere, talking of Garmin mapping and zooming the map, it would be nice if it were at least togglable for mouse wheel down to zoom out rather than in. Presumably this is a function of the logic of down being anti-clockwise for knobs in general, but if there’s some way to make an exception for map zoom that would be much more intuitive.

That’s an interesting thought. It would not be too hard to implement something like that using the existing systems. It would take a bit of work to make it configurable, but if you wanted to hard code it you could actually make that change pretty easily yourself by just changing two lines of code.

Lines 48 and 49 of that define what happens when the mouse wheel is scrolled on that knob:

(Notice that those match up with the events I listed above for putting into Axis and Ohs).

These files are a mindboggling tangle of XML-based template logic and reverse Polish notation that sometimes leave you wishing you were reading the Necronomicon instead. But for our purposes, what you want to do could be done simply by swapping the wheel up and wheel down codes. Modify that file so that wheel up sends the range_dec event and wheel_down sends the range_inc event, and you should get what you want.

You’ll need to restart the sim for it to take effect. Also, if you have the G1000 mod installed, it overrides this file, so you’ll want to make the change there instead.

I need to go get my kid from school, but I’m happy to elucidate more on any of this for y’all later tonight if you want.

Thanks for that. I don’t personally care about it being a toggle, I’d always want it to be the intuitive way.

Thanks for that. I don’t personally care about it being a toggle, I’d always want it to be the intuitive way.

Hehe, the problem comes when what’s intuitive for one person isn’t for the next. Just ask half a dozen people about whether track pad scrolling should be relative or absolute (or natural/reverse, depending on your preferred terminology). :D

Exactly. And I’m sure some of the rivet counters would complain about it being a gamey approach.

I wasn’t having as much fun going directly from Irkutsk to Yakutsk following just lakes and rivers and stuff, so I actually turned my plane around and went back to Irkutsk (again, just a beautiful city). And this time I went South and started following the railroad again. I don’t know, there’s something about following the railroad, I don’t want to leave it. 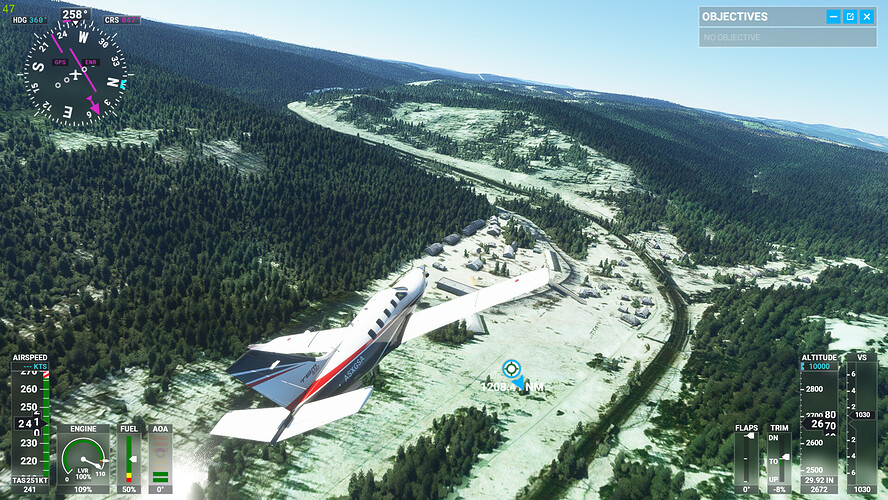 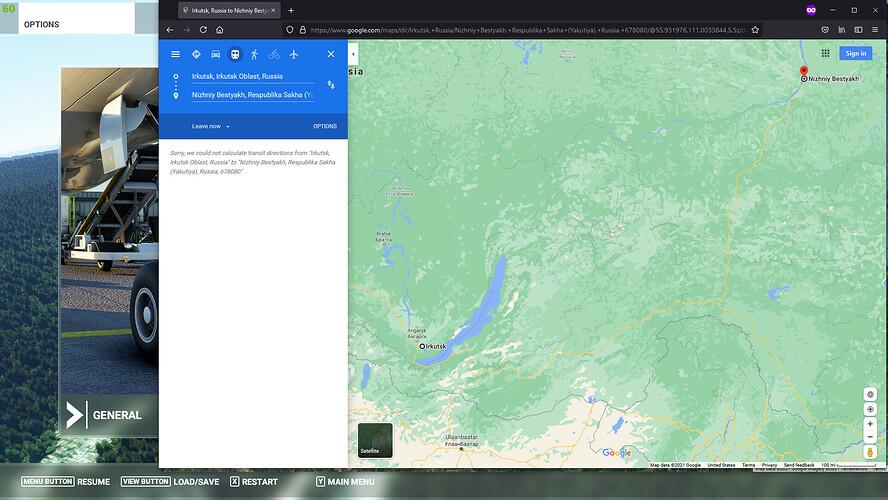 It’s a much longer route, but the railroad calls me.