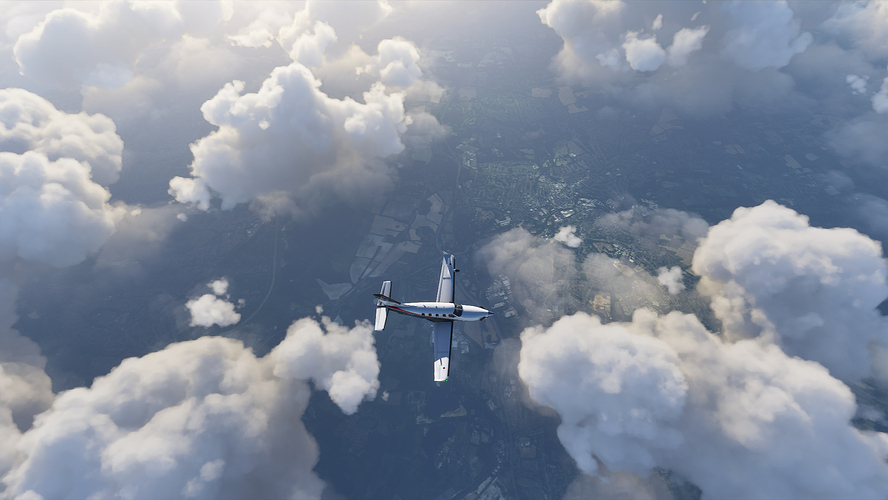 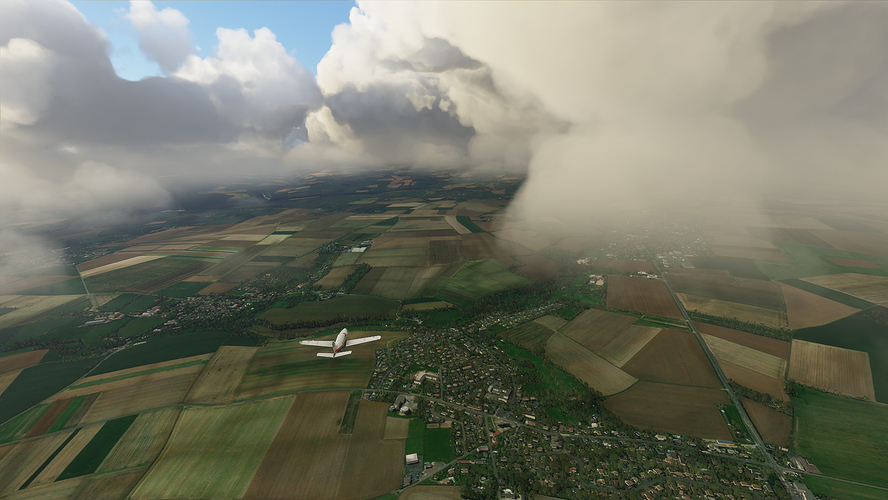 I meant to ask, are those drone camera shots? How do you get the camera up/down in the drone? Or that far away?

I meant to ask, are those drone camera shots? How do you get the camera up/down in the drone? Or that far away?

Yep, drone camera. You fly the drone camera with left hand on WASD and right on numpad+8426. WASD translates horizontally; R/F translate up/down. Numpad 8/2 do pitch, 4/6 yaw, 7/9 roll. (5 will recenter your view behind the aircraft, which I have pressed by accident many many many many times.) I increased the drone speed in the camera settings to about 50% and it’s easy to zoom around and get the shots you want.

You can also lock the drone to the aircraft, which keeps the camera pointed at it and the translation controls will rotate around it. And you can fly the drone miles away from your aircraft, but it always moves with your aircraft as if its fixed frame of reference is the aircraft.

So I did a 900nm flight with 5 passengers from Norway to France with the TBM, which took a little over 3 hours. Mostly I left it on autopilot at 20,000’ After ground fees, rental fees, and fuel, I made about $8000, including a $1500 distance bonus. Making progress toward buying my own plane! I’m just a contract pilot now–will fly anywhere in the world for fun and profit.

Damn, those clouds are incredible.

Making progress toward buying my own plane!

Getting there as well and I hope to do the same post-purchase. I guess I could lease something but for now I’m in a spot that has the rentals I need fairly available. I will say this though, I’m leaning more and more towards either a middle option (5-8 passengers) or the beginning of the bulk carrier options (12-15 passengers.) I’m leaning on that middle option for now, so Beechcraft Bonanza G36, Beechcraft Baron G58, Diamond DA62, or the Socata TBM 930. Unfortunately those scale from 220K to a over a million for a decked out TBM. My guess is I’ll either save or lease-to-own a Beechcraft, and then work up from there to purchase something better as a larger hauler. I think because of that, and a twin having a little more cargo weight capacity, I’ve been flying mostly the Baron for now. Nice and easy to make money with, and the market isn’t crazy-over-the-top on it right now.

Passing 60K means I could pick up a 172 sooner than later. But I can make so much more per run (and time) with something even a little larger. I’ve seen 172s going for 225K. What in the hell?

I do love the hops I’m doing now though. Up and down the eastern US coast is just beautiful right now, both because of weather, view distance, etc. With the communication from Microsoft that they want to add in some sort of seasonal changes, I could see that as a push to try other areas a lot more. Maybe some South American flying or elsewhere.

Someone elsewhere suggested the same. Perhaps a way to allow Microsoft to capture submitted screenshots in-game and adding winners to the ongoing load screens going forward. Something to both build the community and break the launch screen monotony.

r/MicrosoftFlightSim - When you figure out that you can change "Press Any Key"... 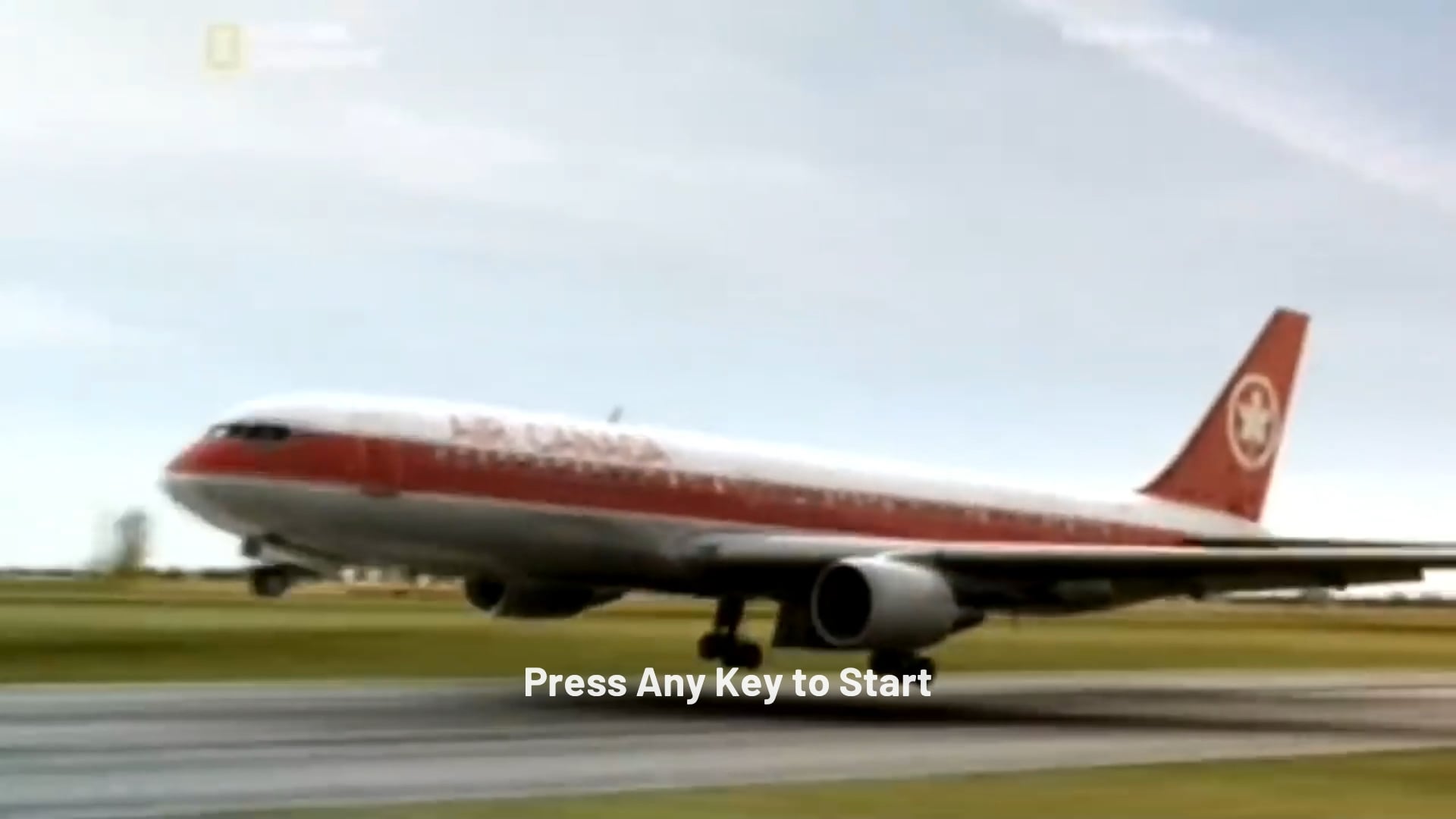 I’m 'bout to take off for another FSE run from Lukla VNLK in Nepal, which is one of the custom built airports that comes with the standard edition. If you haven’t tried it, it’s awesome. Lukla is situated high up on a hanging plateau in the Himalayas. The runway looks like a street angling downhill through the village. My biggest disappointment with the Deluxe and Premium Deluxe editions is that all the extra airports are major hubs; there aren’t any like Lukla, Bugalaga, or Chagual.

If you have an Xbox controller, it works great as a drone controller — same controls as my DJI drone for the most part. I fly with my Thrustmaster HOTAS but use the Xbox One controller for flying the drone.

Sadly, from years and several beefy laptops my end experience is that, even though it’s a top-line GPU you use, your laptops power will always be a far cry from what you can get in a stationary and the GPU’s there. in 3DMark for instance, my 2070 RTX laptop is barely above 4000, where my new PC with a RTX2070SUPER is ca twice that, around 8000.

As for controls, I’m still lost, just throwing caution out the window and flying around AS I pick things up. The Garmin G1000 is intimidating for me and I have low confidence finding what I need on it.

This is a pretty good overview of how to get from what’s shown on the traditional instruments to the equivalent on the G1000. 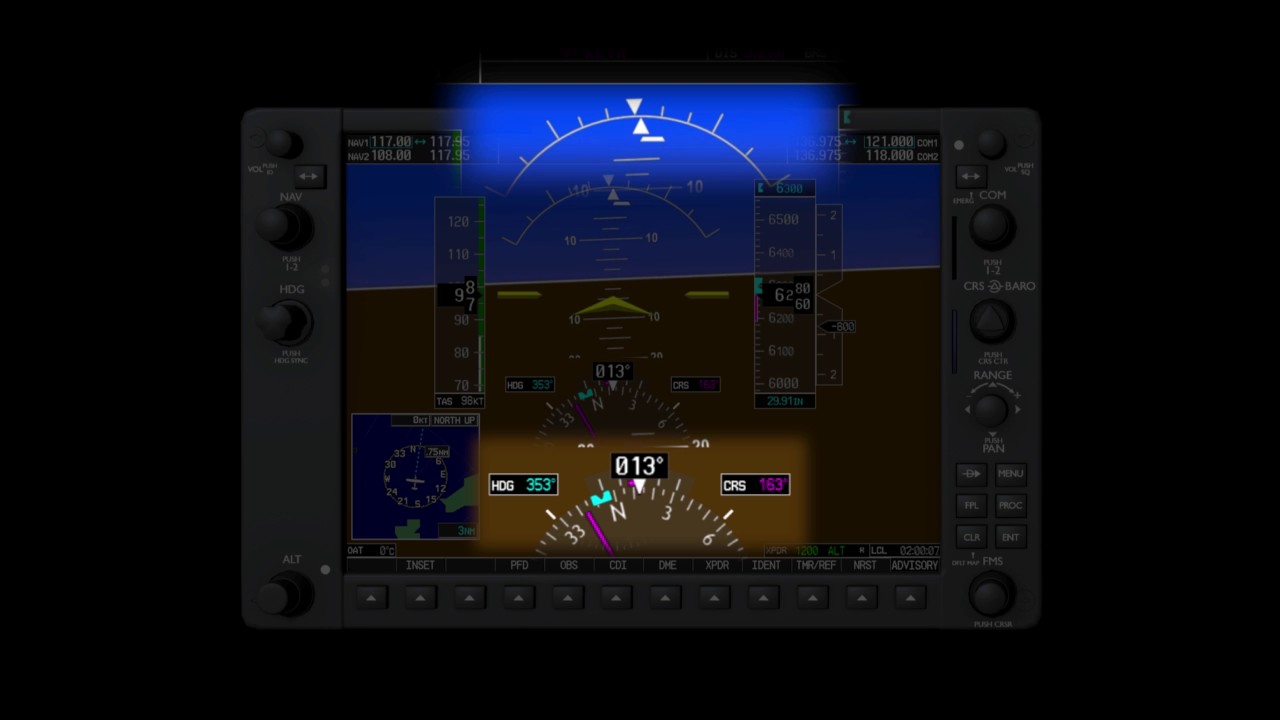 Another good one I think may have been linked before. This one is in game using the C172. 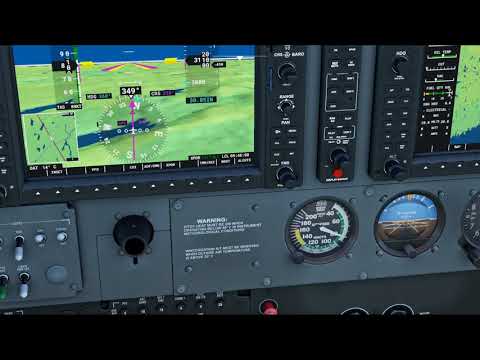 A sim is most popular title released for Gamepass on PC.

Microsoft Flight Simulator is the biggest game launch in Xbox Game Pass for...

Today has been a good day. Armed with 3 different videos on the Garmin, I decided I would train on some newfangled GPS navigation and use of hands free flying. Up until this point I have been all manual control (though with some slight time scaling on longer flights.) This is a real pain, especially so as I’m increasing the length of my flights I need the basics of autopilot at a minimum.

I started today with clear skies in the Baron. One nice thing about autopilot is it allows more use of the camera views to sight see along the way. 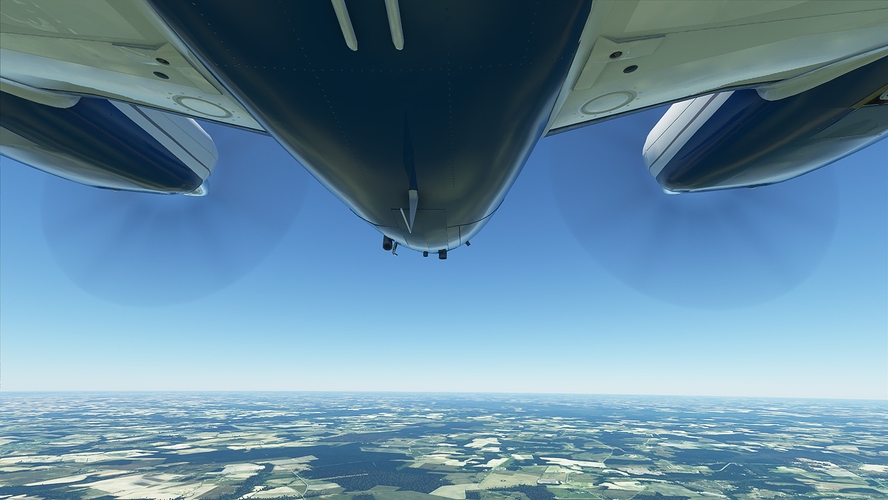 Just me and the copilot talking about the view. Wait … there’s a copilot? Maybe it’s a hispanic man named Jesus and this is where he takes the wheel: 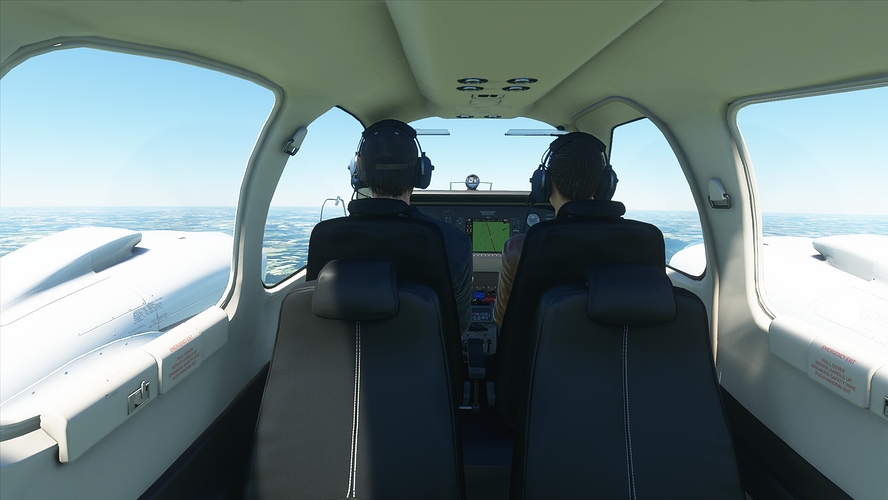 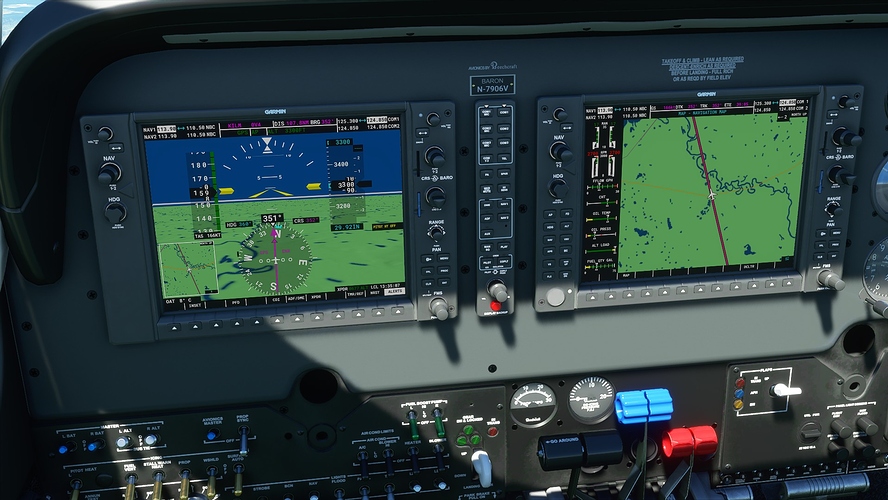 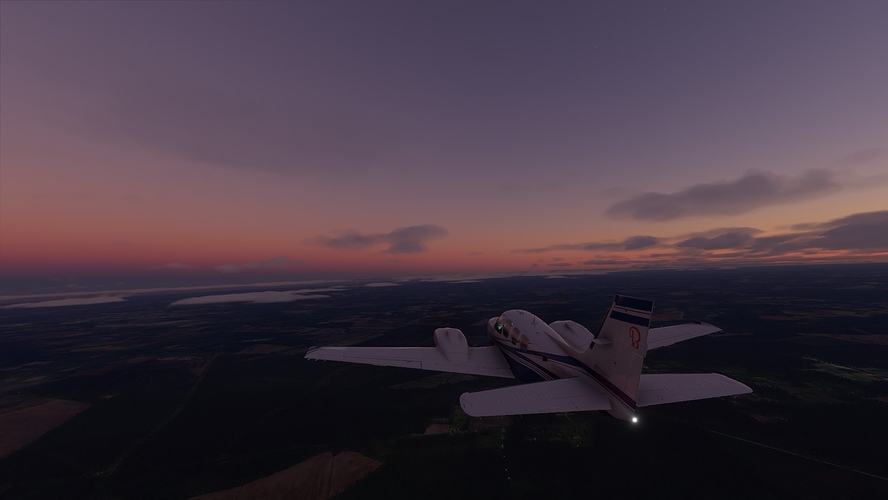 And a creepy shot from some drone looking in the windows. If you look real close you can see me not paying attention and overshooting the airport, below. 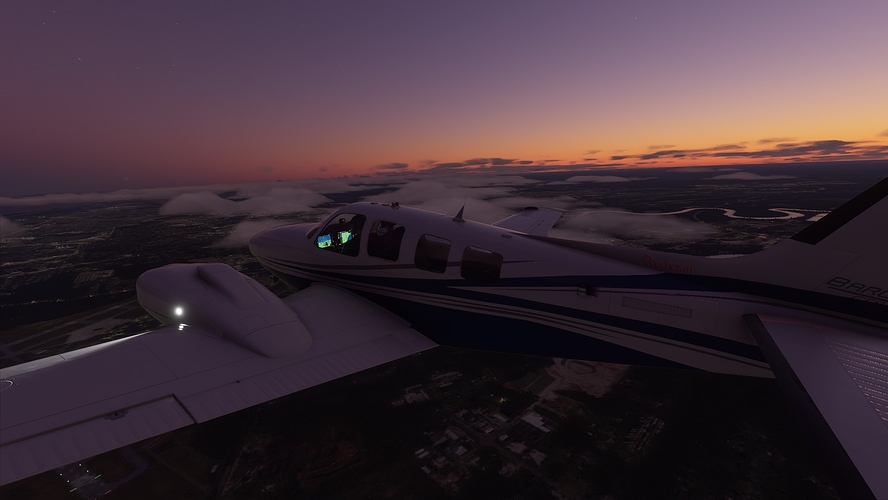 I took this timelapse today flying across Quebec at 26,000’ 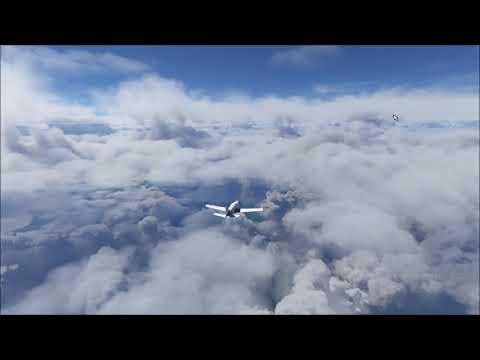 The 3rd party Carenado (Cessna) CT182T Skylane on its maiden flight. It’s a bump up from the 172 Skyhawk, giving another 550lb weight capacity, more range, a higher ceiling and more horsepower. A bit better in every single way over the 172 and more akin to a, “true 4-seater,” for the heavier modern American flyers. Carenado seems to have modeled it quite well, it has a somewhat modified glass cockpit from the 172, a bit more modern and a few extra features. Advantages: this thing can take off very quickly and zip along quite a bit faster than the more sluggish 172. It climbs well and seemed to handle very well, too. Disadvantages: It seems LOUDER both inside and outside than the 172 in-game model. I think this may have to do with Cerenado providing sounds as part of the add-on? Not sure though. It may be configurable. Overall, the model is so close to the 172 in a lot of ways, unless you want it for the factor of matching something you fly in RL or love, or your looking at using it for an add-on use, you could probably wait this out until it’s a bit cheaper. It’s the first on the market, thus it can command a premium price. 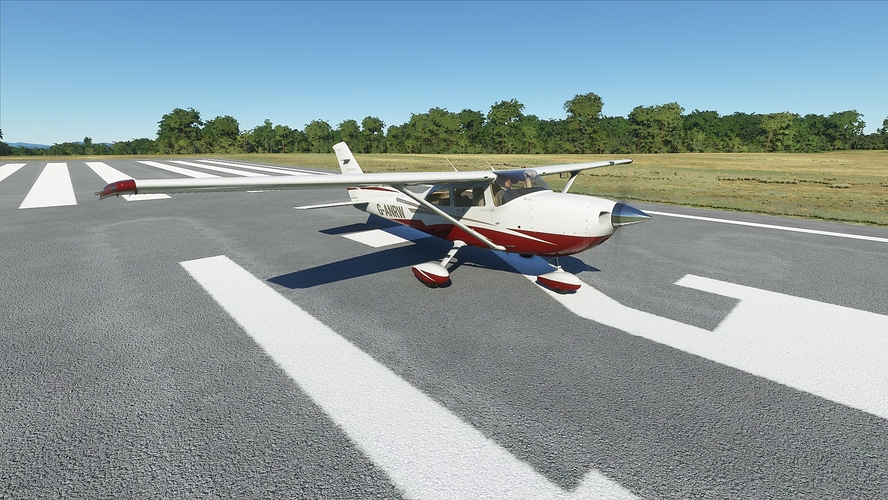 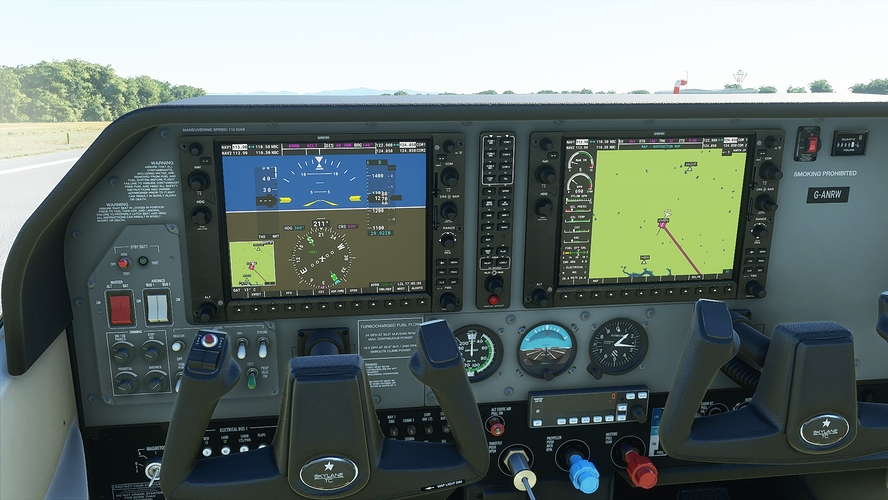 Cramped but nicer inside: 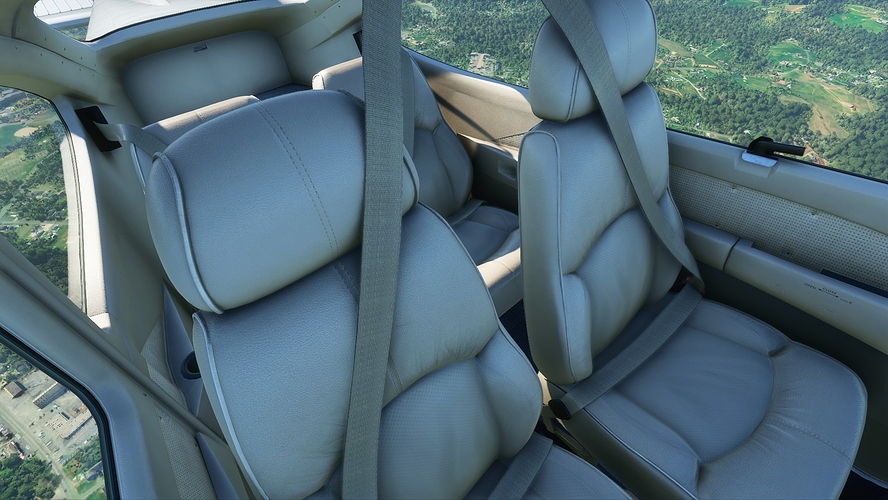 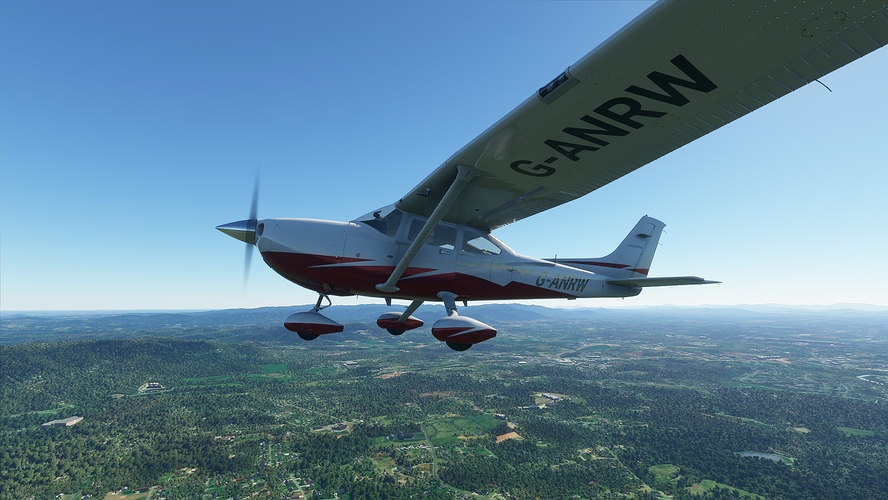 Good visibility in cockpit on approach: 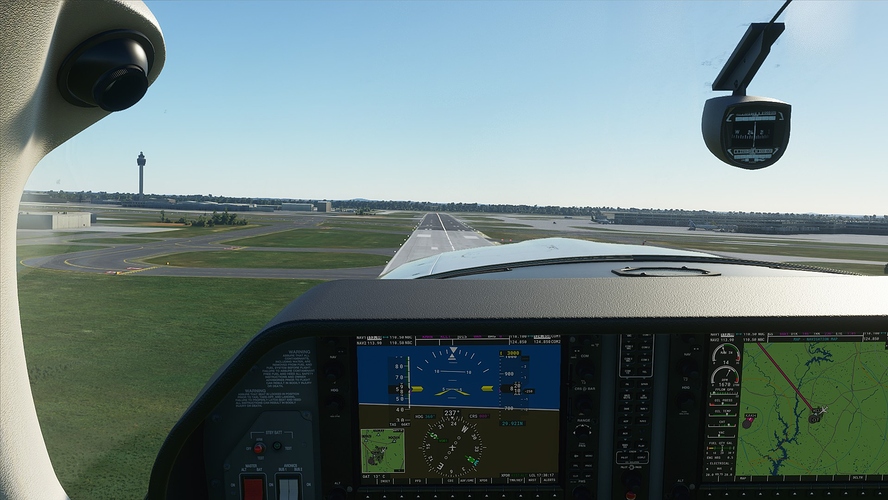