The last rumors I heard on the G2 were October. I watched a livestream with the hardware team about a week ago and they were talking about tweaks they had just done to it, so I’m guessing we won’t see it in September.

I’d rather them get it right before shipping out. I remember one of the reviewers who glowed about it did mention a few things he thought they should tweak. Head adjustment like the Valve Index was one.

Uptopic we had a discussion about loading speeds and I was going to post the performance of my new Sabrent m.2 drive. I tested it last week but forgot to post until I was reminded by someone claiming ssd performance doesn’t matter for gaming in the upcoming graphics cards topic.

Kinda feels like it matters. Newer SSD technology plus m.2 vs SATA makes a huge difference on my system. “Skipping videos” is using the -Fastlaunch flag on a custom shortcut. The “load to opening menu” numbers may not be directly comparable because the sim does an online check for updates and that time might have varied slightly between the two tests.

Always a good primer on how NVMe is so much superior to SATA. Remember, SATA was a HDD technology. When it was developed, the idea of non-volatile storage was years away from being. 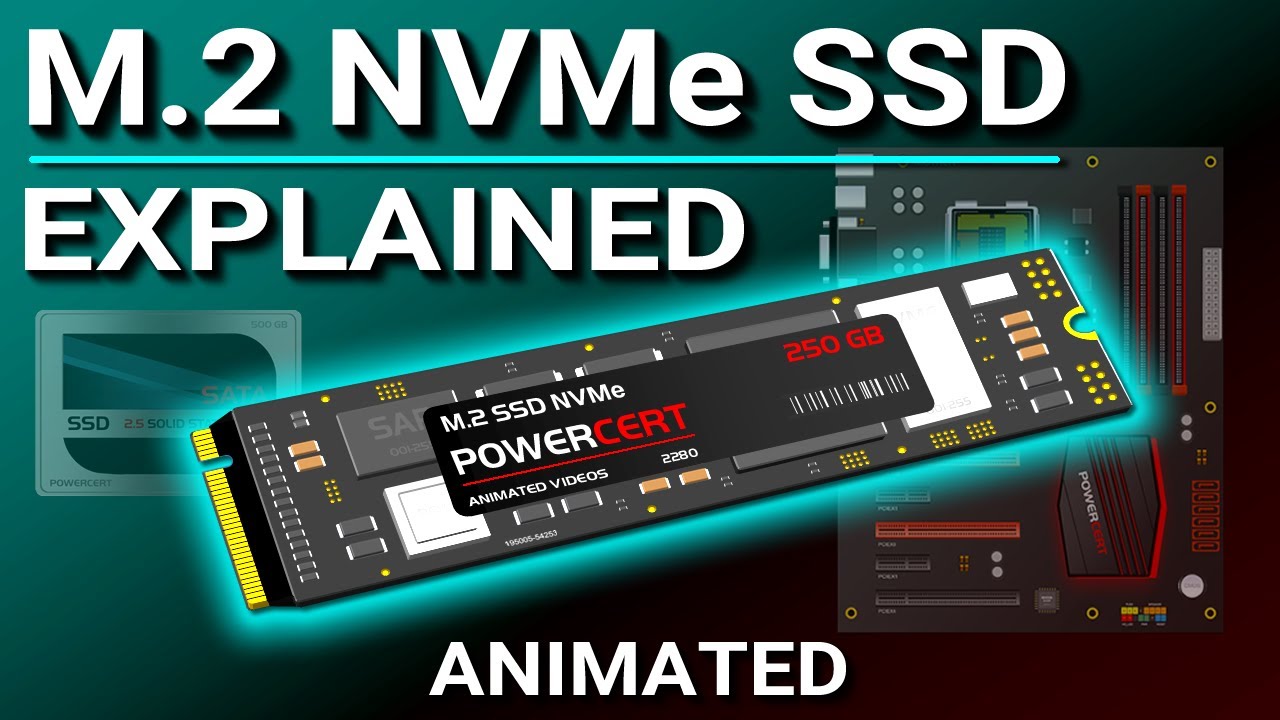 For anyone with a Stream Deck or the mobile version thereof, there are a lot of posts lately with examples of templates for MSFS 2020: 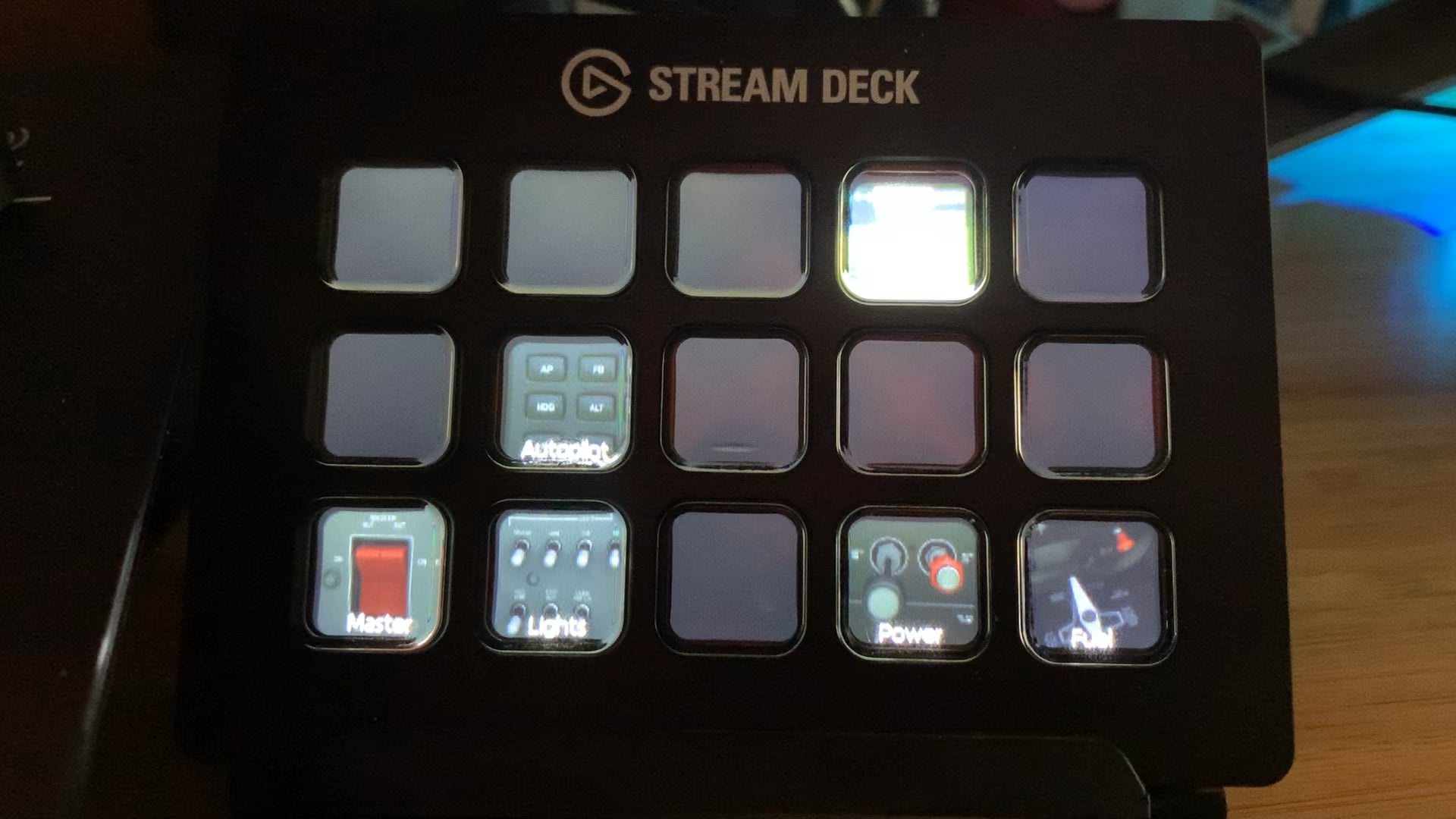 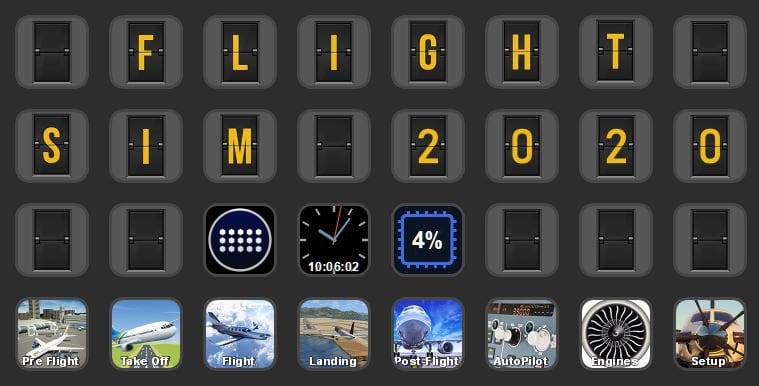 I have the mobile version so I have a tablet allowing me to do quite a few in-game features. I also have [windows+#] key binds and pinned applications to switch between MSFS, Discord, Chrome, etc while in game and flying around.

I have a tablet allowing me to do quite a few in-game features.

How are you doing that?

You load the Stream Deck windows app (download from their site.) Consider that like the master that allows the extensions to work. Then a mobile version on a tablet or phone (cost is by month or year, not horribly expensive.) Then you set it up based on what you’re trying to do, be it opening an app, posting something, interacting with a program, keyboard commands, etc. Actual Stream Decks are akin to hardware keyboard extentions that allow all of the same thing. They are common in use among big streamers or heavy PC multi-taskers since they have a lot of plug-ins to allow different effects at the press of one of the keys. “Mellified thanks for your donation! (plus animation.)” That kind of thing.

The app allows similar things. There apparently are similar or even free windows to tablet apps that will do the same thing, for sure look around if interested.

I’m using mine for all the autopilot settings and checklist on/off things in game, plus quick switch of things with just pressing the button on my tablet versus, “alt-tab, tab, tab, click to make active,” etc.

I have a Stream Deck. I didn’t realize there’s a tablet app option. I thought you were doing something completely separate with the tablet.

I don’t know when they added it. It’s an app for both Apple and Android platforms though. Give it a shot.

Thanks for the tip on Head Tracker. It does work, but in my case its default position was outside the aircraft, and it didn’t turn much from side to side. I probably had it too far from my face? I’ll fuss with the settings.

The sim is gorgeous. I flew around Seattle a bit, then did the first couple training flights around Sedona, which is really pretty. But I wonder if I’m getting too old for these things: I felt a bit queasy even before I tried to install the Head Tracker. VR might really be a bridge too far for me. But I’ll try again tomorrow.

On the head tracker, you definitely need to bind a key to recenter the default view (I think it’s Home by default), and I had to tweak the opentrack sensitivities. On Mapping I ended up with 90 degrees on Yaw, input 60/output 90 on Pitch, and 180 on Roll. Found the Accela filter the most comfortable.

I made my first scenery!

The closest airport to my house, Majerle Field in Duvall, WA, had some tall trees at the end of the runway that weren’t really there when the STOLport was open. (The airport’s closed now because the new owner stopped mowing the runway, sigh.)

Anyway, if ya’ll want to check out the beautiful Snoqualmie Valley, I’ve cleaned up the excess foliage, mowed the runway, added a little more activity around the airport, and thrown in an easter egg or two.

Download here, open the folder in the Zip, and drag airport-wa17-majerle to your MSFS/Community folder. (Full instructions in the readme file if you haven’t installed add-ons yet.)

Holy cow. This is the best flight sim I’ve ever used, and it’s not even close. The scenery is amazing, the aircraft are beautiful, and even the air traffic control is an order of magnitude than anything that’s come before. I have been flying for 12 hours, lol. Seattle; Wyoming; Arizona; California; New York; Switzerland. I’ve yet to see scenery that’s disappointing. And my old GTX980, on a 9-year-old CPU, is doing fine at Medium and even High detail. Only minor lag I’ve had was in a 747 over JFK.

I have the mobile version so I have a tablet allowing me to do quite a few in-game features. I also have [windows+#] key binds and pinned applications to switch between MSFS, Discord, Chrome, etc while in game and flying around.

Waaaait – I can use my iPad to help me play this game? This is a project for tomorrow! I download this mobile app thing, and it somehow can sync with my PC? I struggle with the enormous volume of hotkeys, and this would also be great for stuff like checklists and ATC and navigation.

I made my first scenery!

Awesome! That looks great! I used to live around there too, although I don’t know that airport. I might have flown over it today, in fact, as I took off from Sea-Tac, toured Mount Rainier, then flew north, then west over Lake Washington, past the Space Needle, over downtown Seattle (and ferries), and back to KSEA. What a glorious flight it was! This sim is amazing!

Also, I got TrackIR working, but I hate wearing my little hat. I got OpenTrack to work once, then calibrated it – and now the game won’t recognize it. But it may be just as well. I think I enjoy the game more just using the view hat on my yoke, which lets me use the built-in hotkeys to zoom into instruments. I get less queasy too.

Just had a nice visit to Chicago! 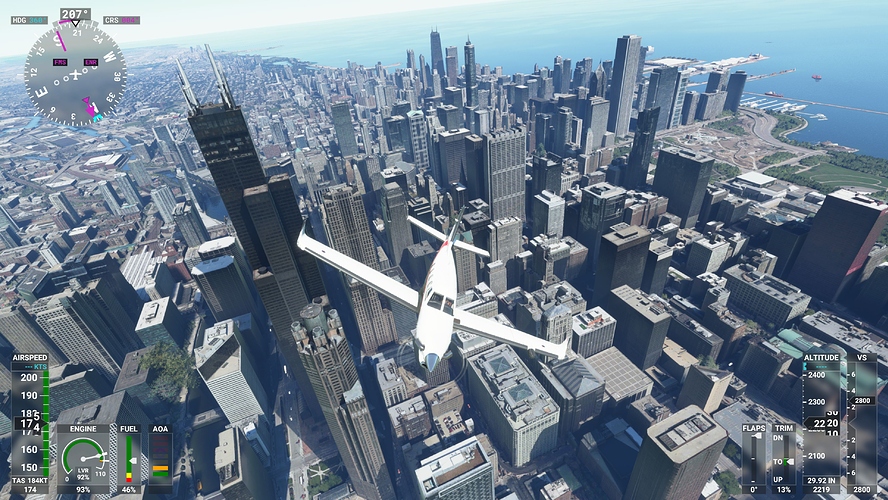 Amen, brother. This thought has been in my head quite a bit of late.

Waaaait – I can use my iPad to help me play this game?

You can. Stream Deck is just an app (or hardware) that mirrors input from your PC over to a tablet or a mobile. It’s $2.99/mo. Touch Portal is a similar free app for android, I’m sure there are iPhone and iPad versions too.

Think of it as a keyboard extender but also customizable based on how you program it. Need a different on/off key for something? Got it. Need to open a URL? Got it. Need to perform a command on one of the supported plug-ins? Got it. Need to nest a full menu of extra things of a specific purpose? Got it. Arrange it how you will.

For Stream Deck specifically, grab one of those templates linked above and modify as needed. The max for the tablet version is a 5 wide by 3 high button list, programmable by you.

I’m still boggling over how much of the world is represented here, and in so much detail. I once built the Laramie (Wyo.) Regional Airport for X-Plane, since my first (passenger) flight on a tiny general aviation plane was into that airport, and X-Plane really didn’t represent the airfield at all. Today, on a whim, I visited Laramie in MSFS20, and sure enough, it’s already got a reasonably accurate set of buildings, vehicle traffic, lights, parking, gates, the whole shebang. So impressive.

Not sad at all. Nice to have FSE right at your fingertips, without alt-tabbing. Do you have sub-menus for your autopilot and comms and “Sim CMDS” buttons?

Do you have sub-menus for your autopilot and comms and “Sim CMDS” buttons?

I’ll say this, I know it seems trivial, but especially for those MFD buttons, the last thing I can remember is 20 new button combinations for flying. Having a, “panel,” right beside my laptop really helps.

It doesn’t seem trivial to me. The keyboard shortcuts are hard to remember and complicated – often ctl-alt-something or weird keys like Scroll Lock and numpad keys, keys that I definitely can’t “touch type.”

Do those buttons light up when you select one? If you turn on AP, does it turn green or something?

My one hesitation is that I do like to use my iPad for charts, especially airport maps for taxiing and runways. But I suppose I could add a hotkey to the Streamer app to bring up my iPad’s Books app, which is where I tend to store PDFs of charts.

Does msfs have a clickable cockpit? Because if I does, and the VR patch has hit, the dude at www.pointctrl.com needs to start mass production asap.

You can for sure click the MFDs. I haven’t tried messing with anything else manually.