I usually trust Ars, and they said

However it works, HoloLens is an engaging and effective augmented reality system. With HoloLens I saw virtual objects—Minecraft castles, Skype windows, even the surface of Mars—presented over, and spatially integrated with, the real world.

It looked for every bit like the holographic projection we saw depicted in Star Wars and Total Recall. Except that’s shortchanging Microsoft’s work, because these virtual objects were in fact far more convincing than the washed out, translucent message R2D2 projected, and much better than Sharon Stone’s virtual tennis coach. The images were bright, saturated, and reasonably opaque, giving the virtual objects a real feeling of solidity.

Through it all, the 3D effect was thoroughly convincing. The system felt very low latency; as I moved my head and walked around, the objects retained their positioning in the real world, with the castle, for example, never becoming detached from or wobbling around on the table. While Minecraft of course falls some way short of having photorealistic graphics, the melding of real and physical nonetheless felt convincing.

That said, the version they could try was more clunky than the presented on stage… AND it was tethered to the ceiling (power?) AND it was tethered to a “neck computer”. And some other articles mention the fov isn’t that wide, so all it’s done in a “window” in front of you, nor you could pin virtual objects on reality, so I suspect the MInecraft demo was very set up for that particular room. Could it work if you would do it in another room? In theory yes, in practice I suspect it’s still too green.

Microsoft is doing a great Research job with these technologies, but don’t expect it to have it really working as they staged until 4 years or so, as you can’t solve the computing and power needs just clasping your hands. And the most advanced stuff from their concept video will be still further away. 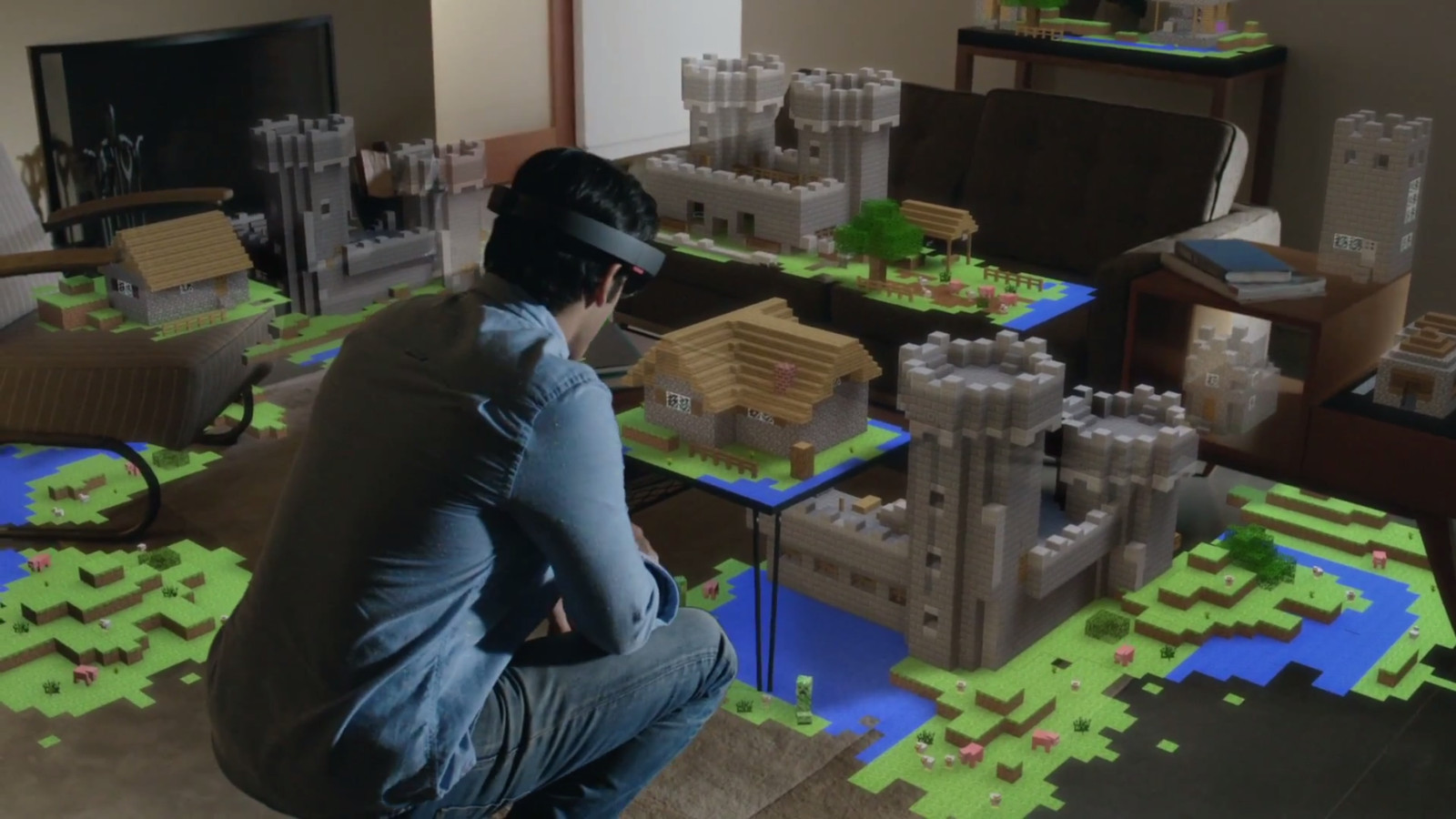 We just tried HoloLens, Microsoft's most intriguing product in years

We just finished a heavily scripted, carefully managed, and completely amazing demonstration of Microsoft's HoloLens technology. Four demos, actually, each designed to show off a different use case... 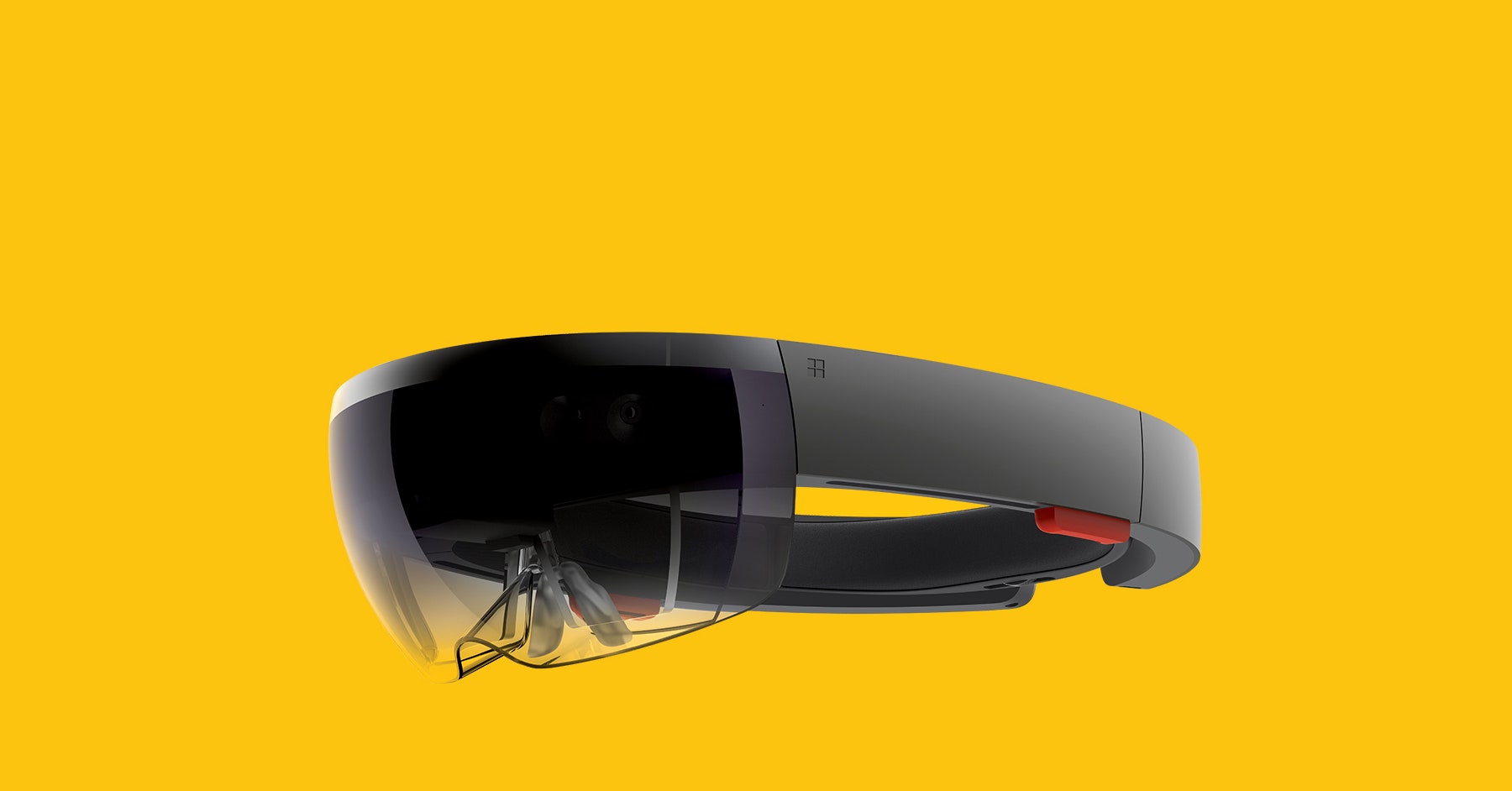 The prototype is amazing. It amplifies the special powers that Kinect introduced, using a small fraction of the energy. Project HoloLens’ key achievement—realistic holograms—works by tricking your brain into seeing light as matter. 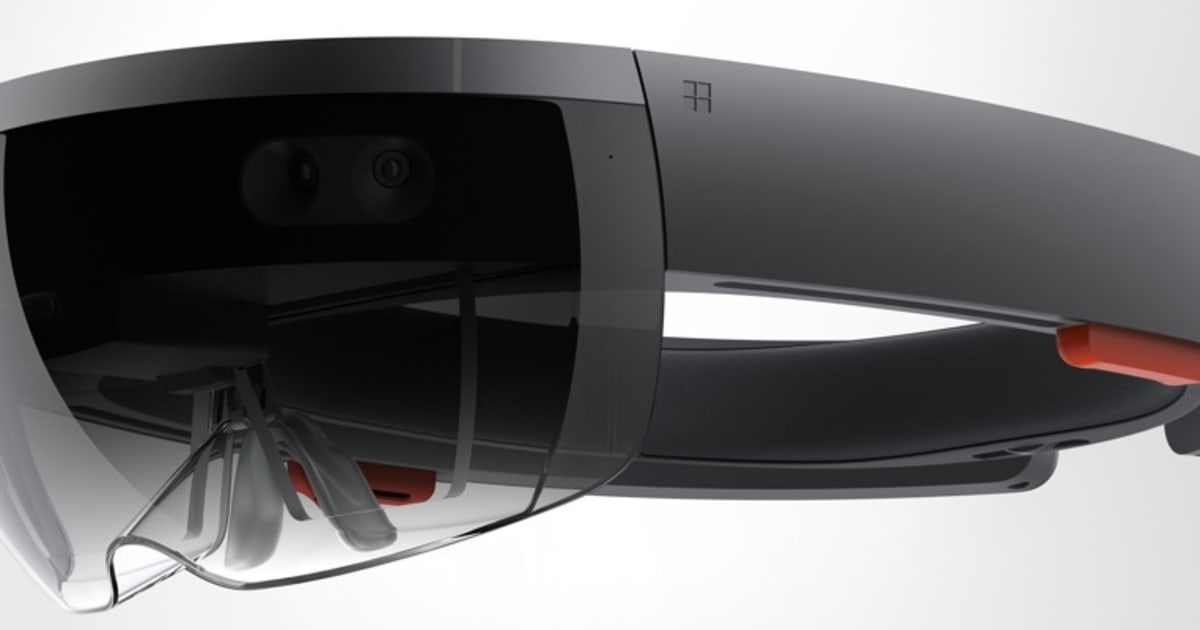 Unlike virtual reality, it's much easier to describe what it's like using Microsoft's "mixed reality" holographic headset, HoloLens. Imagine you're wearing su...

This could be some seriously cool tech if it pans out. I want it for work, let alone some application for games!

I find the whole, “It’ll launch in the Windows 10 timeframe!” thing deceptive. On one hand, they’re implying quite soon, because Windows 10 is coming this year. On the other hand, Microsoft tends to have operating systems hang out for awhile and do point revisions, so we might be seeing 10.4 in four years, and sure, if HoloLens launches then, they’ve met their commitment. It’s clear from the hands-on impressions that they’re a long way away from what they talked about on stage (untethered, lightweight), so why not just say that it’s something they’re working on, show it off to get people excited that Microsoft can still innovate, and then work quietly with partners to get 'er done. Kinda the approach Oculus Rift/Facebook is taking, I guess.

It’s a little strange, because they didn’t just talk about the prototype on stage, they actually ran the on-stage demo with it. Maybe the prototype they used on stage was scaled down in some way though.

As for me, I’m trying not to be too excited about the announcement because it could be years before we see it. It’s hard though because I never really anticipated seeing anything like this in my lifetime. VR headsets like Oculus Rift, sure, but not holograms and computer screens transposed on the environment. Granted I’m not that old, but it just never occurred to me that someone would be going this direction before VR.

I suspect Augmented Reality will have a much longer gestation time than Virtual Reality before it’s a must-have consumer item. It really is much easier to throw out the real world and substitute your own than it is to make the real world play nice with a virtual one, at least for non-trivial apps.

I can see this tech having all sorts of mundane, useful applications in the near term though.

Honestly, I’d expect if it launches soonish for the headset to be pretty dumb, letting the PC or mobile phone it’s communicating with to do all the processing work.

For a couple seconds, you can see my teammates’ project here:
Walk on Mars with OnSight

Very cool. I’m getting that “I want” feeling.

Looks to me like HoloThing was designed to create hype amongst geeks & geek media who would find the rest of the presentation boring… while the overwhelming majority of ordinary customers want precisely the boring Windows update with a Start menu and couldn’t care less about AR/VR.

I have colleagues in sales that were telling me about the new Microsoft Holograms last morning, and how crazy it was. That was from people who have little or no technical insight or interest. I think that most people find the name Hologram to be rather evocative and fires the imagination.

Which is funny because the hologram part is the least interesting thing about the tech, as advertised. It’s just a display technology.

Which is funny because the hologram part is the least interesting thing about the tech, as advertised. It’s just a display technology.

Well, it’s display technology that has an extremely low response time, with capabilities to map the display over the real world in augmented reality. It’s basically everything in a VR headset, plus additional object recognition and mapping.

Er…where’s the VR capacity, Timex? It looks pure AR to me from what I’ve seen, in the same way the Oculus etc. is pure VR.

Er…where’s the VR capacity, Timex? It looks pure AR to me from what I’ve seen, in the same way the Oculus etc. is pure VR.

The Mars experience described in the links above is supposedly almost 100% pure VR, except with 1) limited motion and 2) you can faintly see the actual room behind it (to keep people’s tummies from turning over.)

Well, it’s display technology that has an extremely low response time, with capabilities to map the display over the real world in augmented reality. It’s basically everything in a VR headset, plus additional object recognition and mapping.

Well, the second part has nothing to do with the display tech, hence my comment. I can totally understand “people who have little or no technical insight or interest” being wowed by the overall concept as presented. And if they ever do manage to get proper virtual object manipulation working it would be genuinely cool. To focus on “holograms” though seems funny to me. How long ago was Time Traveller (I know that wasn’t technically a hologram)?

Uh… no one uses AR because no one has made AR devices, because until now it was technicallly impossible of doing it properly (and in fact I don’t trust this is mature enough).

There are shit tons of AR devices. Your 3DS is an AR device, as is your Vita and your PS4, and your Xbox One, and probably your phone.