I’m beginning to see why I’m enjoying it and others are not. I have only played it docked so far, in 3 player coop with my two kids. We are not completionists or min/maxers so we are not looking to optimize our builds or find every last hidden item. Basically we make our way through the main path, killing as we go, constantly upgrading our items with the drops and enchantments that are superior. No one has picked a “build” to specialize in. We all do it all. Melee, ranged, aoe, etc. We’ve party wiped the required 3 times only once playing whatever the default difficulty is. And we’re loving it. My 7 year old son couldn’t fall asleep last night, he was so eager to get back to playing he just wanted to keep talking about it all night. Eventually I got him to fall asleep, only to be awoken 10 minutes before his usual “waking up daddy allowed” time because he couldn’t hold off any longer. If you’re able to play in this way, the game is a steal at the $20 USD price tag. I’ll definitely be picking up the DLC in time, too.

I personally like trying to use a roll to find hidden chests and I enjoy making detours behind buildings to find some too. But the rewards aren’t so great they are a must do. At least so far.

So it definitely makes sense to ignore them if they are a detriment.

Then again, in Diablo too, I often don’t like leaving a map until I have uncovered it all in case some shiny drop is waiting for me.

Yup. Opinions are just that. I didn’t think his opinion seemed particularly well-informed in certain respects, nor do I think he tried to find the fun in the game, but he’s still entitled to it. He basically hated the game because it wasn’t what he wanted, rather than reviewing what the game actually is (haven’t watched second video), which is a particular potter piece of mine.

One of his negatives on higher difficulty levels is that there are a lot more ranged enemies making it lot harder and requiring more health and healing stuff.

I’m fine with that…I will just build and adjust based on what the game is giving me, challenging me…that is what I like to do anyhow…and with this game, you can change and adjust your build a lot easier than other games of this type so I’m fine with that…a new challenge, bring it on.

My 7 year old son couldn’t fall asleep last night, he was so eager to get back to playing he just wanted to keep talking about it all night.

That’s just best thing ever! I remember my boys being obsessed with “real” Minecraft and thinking and talking about it constantly. Heck, I remember being that way myself as a kid with my Atari 2600 in the late 70’s. Those memories will last a lifetime.

Well the cauldron boss was … not fun. It was easy to cheese at least though, just took me 20+ minutes running in circles shooting fireworks at him every 30 seconds (I did have the difficulty turned up though 2 levels higher than my level though).

My thoughts echo @Ephraim’s after 40 min with my 6yo. Run around co-op together smashing zombies and skeletons in Minecraft world. He loved it and I get to introduce him to the concept of arpgs. I am surprised there is anyone that really thought this was going to challenge POE or Diablo or Torchlight et al in terms of mechanics or difficulty/skill ceiling.

Runs a bit crappy on Switch, hopefully a patch or two smooths it out.

I wonder why they didn’t add in crossplay… this is the perfect crossplay game… just like Minecraft (and terraria).

I am surprised there is anyone that really thought this was going to challenge POE or Diablo or Torchlight et al in terms of mechanics or difficulty/skill ceiling.

A follow up (of sorts) to a masterpiece in design execution that so elegantly papered over any generational gaps you’d question they were ever there in the first place. Made by a studio with the kind of resources at its disposal that the dreams of kings would seem banal in comparison.

I mean, look at this; 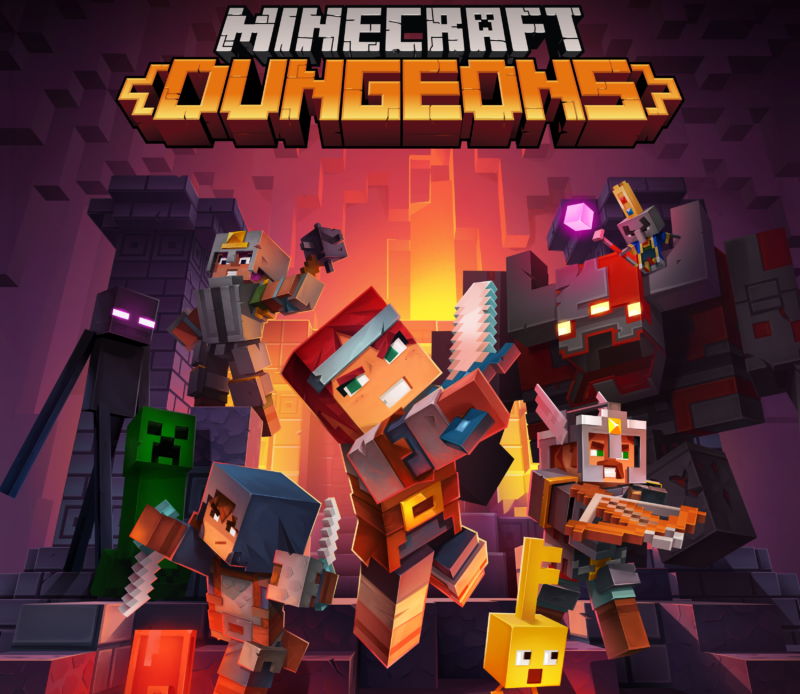 Look at how expressive everything is. It’s still blocky ol’ Minecraft but the eyebrows and other facial features add a whole new dimension to it and it looks awesome! The opening intro even has the same detail, noticeable when one of the characters turns with a wry smile to the camera at the end.

Immediately following that you’re dumped into a really lame ‘pick one of 20 presets with 5 more being paid DLC’ character customisation that doesn’t even hold a candle to what you can do in Minecraft. We’re also back to back to the boring low-detail and expressionless blockfaces we’ve all seen before, all trace of emotion wiped from them as rapidly as was from my own visage upon witnessing this hackneyed implementation.

Sure, it’s not a big deal in and of itself but it’s just emblematic of everything in this game; a minimal effort affair that never musters the courage to do anything genuinely new, unique or interesting despite whatever initial pretensions to be otherwise.

I honestly went into this knowing next to nothing about it, so much so that I was even surprised that it wasn’t in first-person after I’d booted it up. So if this was marketed as being only of interest to six year olds that’d never played an ARPG before, then in all honesty I missed that and yeah, the joke’s on me. At least it was free (but not free).

None of the above should detract from the fact that some of you are enjoying it with your kids. Just imagine how much their little minds are gonna get blown when they get their hands on a half-way decent example of the genre. Ah, to be young again!

A bunch of Microsoft execs attempted to increase the revenue from the Minecraft brand by releasing a bare bone game that copies old concepts and brings nothing new to the table. They have probably been taking notes from Blizzard and their shitty Heroes of the Storm.

This is definitely not for me and I suspect it won’t be a hit with the kids either. They are not playing Minecraft for the art style…

If you give this game to your 6 year old as a kids’ game, they are going on to be in for a shock when they die repeatedly. There is challenge in the game, especially playing solo. It’s a nice one for parents and kids together for sure though.

As for myself, I have a few hundred paragon levels in Diablo 3 and I’ve still been enjoying this one on my own. It’s not a replacement for that game by any means and will not stay near as long in my playlist with the current content. But it’s not a minimum effort product. No jankiness, very responsive and good smart targeting (playing with a controller). It can definitely use more loot and variety. We will see how they improve over time.

It actually felt janky to me trying to play it with mouse/keyboard. The issues with it are mentioned in the video above; blocky terrain at different heights just does not translate well into mouseclicks with that camera angle. Especially coupled with the fact that the game has no shame in obfuscating your character with random foreground objects from time to time. As cardinal a sin as I can think of for this particular genre.

Bummer for you. The kid and I are enjoying it coop quite a bit. As much as we enjoy coop torchlight or far cry. Just stop. $20. Worth it for sure.

I’ve had some fun with it just playing solo. May get to try some co-op later. 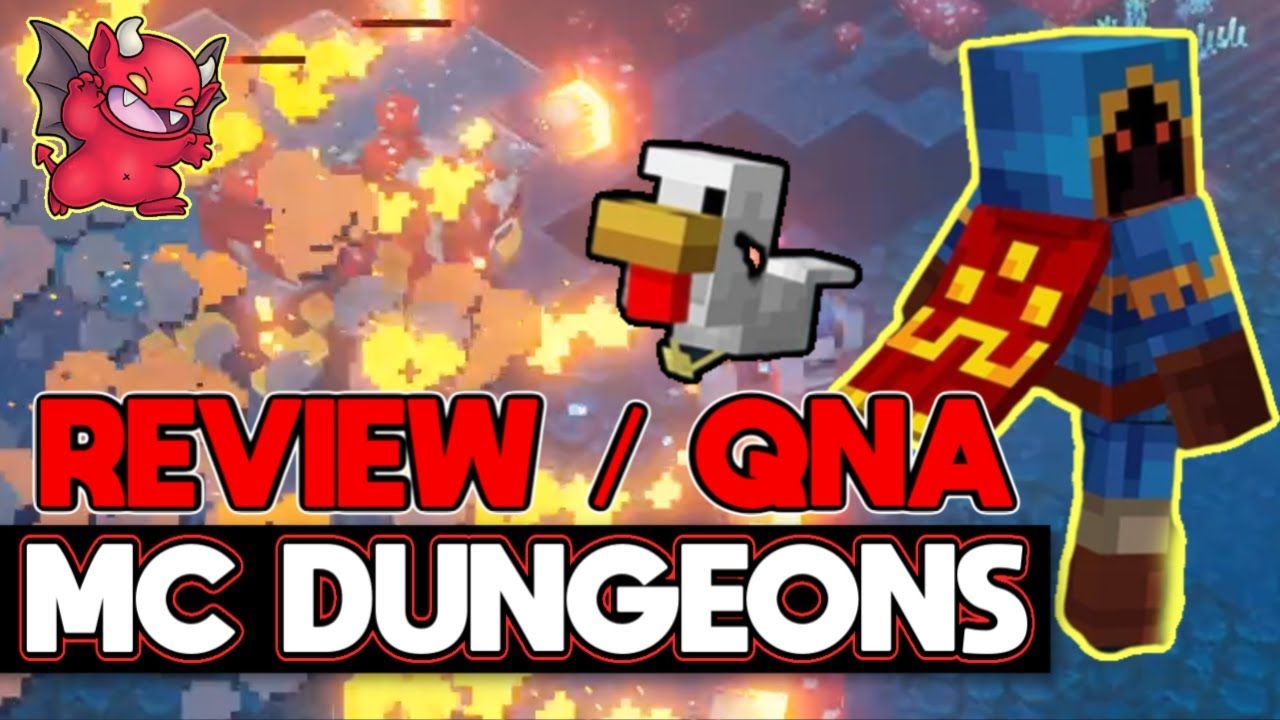 Also discusses “What’s the end game?” The short answer being get ready for future or content (Island Realms) and/or flesh out your gear (upgrade the enchantments for the various builds you use…).

One thing that was helpful to learn, you reclaim the enchantment points you invest in weapons if you deconstruct them. I had been holding off enchanting stuff because I didn’t want to lose the points, oh well.

Definitely. I mentioned that earlier in the thread. You don’t need to worry about inventory space, but it’s need to know you can recover enchantment points.

I am really surprised so little of the environment is not destructible or interactable.

While I agree that this game is definitely a 6 or 7 out of 10 if compared to Diablo (or other similar games), as mentioned above it is great for playing with younger kids. I’ve had a hard time finding a game that is simple enough for my five year old to grasp but also interesting enough for me not to get bored, so I am happy that this game fulfill both those requirements. Also, once my kid has mastered this, then it will open the door to many other more complicated games for us to play.

My biggest complaint is the performance of the Switch version. We experience serious input lag in some areas while playing yesterday. Hopefully, with some patches, this will improve.