So that is where all the retired truck drivers ended up.

Good! I like to see middle aged and old gamers, since I will be/am one.

Apparently I look like a (only slightly younger) retired truck driver. Must mean I need to keep playing!

Its not the years, its the miles! 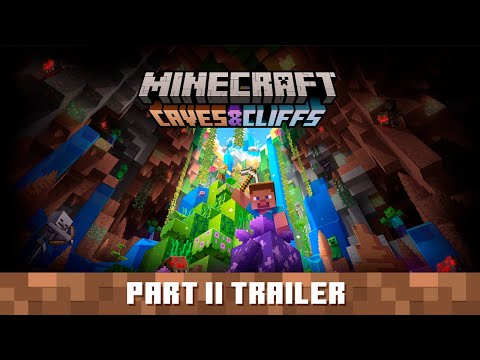 My friend and I have a Mineshafts and Monsters server going right now.

God this modpack blows. We were looking for some sort of exciting questing mods, but this really does feel like some sort of “git gud noob” modpack that is punishing to be “hardcore”. It also is 100% required to do minecolonies and create your own colony to gain “fame” to equip more powerful gear.

It is really weird that a game that expects you to do a lot of questing and monster hunting also requires you to micromanage a minecolonies colony.

I love minecolonies, but coupling it with an uber-hardcore monsters experience is just an odd design choice. Once our colony got attacked by an ice dragon, that took like 20-30 deaths to take down, destroying a good 40% of our colony, we kinda stopped playing.

Also, the rewards are not meted out by the questbook very well, and the trinket drops you get every x number of ticks are completely randomized, so you might not get a super useful trinket at all.

Was hoping for a lot better from this modpack, it is also SUPER resource intensive on the server side, and is prone to a lot of lagging and crashing.

Maybe - hopefully - I’m doing something wrong, but as far as I can tell it’s almost 2022 and you can’t actually play Minecraft with RTX.

Sure, there’s pre-built worlds by nVidia that look nice. But if I want to create a new world that doesn’t look like shit? Nope. Need an RTX Resource Pack. Let me just download one of those aaand… they don’t exist.

There are guides to create my own for some reason. I’m not doing that.

Why is this so hard? I want to be able to create an RTX-enabled world. I also want to be able to join my son’s non-RTX worlds and see RTX stuff on my PC because I don’t want to play a game that looks like it was made for an Atari 2600.

but as far as I can tell it’s almost 2022 and you can’t actually play Minecraft with RTX.

I think you are correct. It seems more a demo, than a feature.

This might not be the right game for you…

I abhorred it when I first started with the modpacks discussion above, and raced out to find 32x/64x packs to make things prettier along with every other tweak/shader under the sun. Ultimately, I came to grips with it and now I’m just using the basic 16x graphics (with an improved font) and no shaders. Takes a little bit to adapt, but it can be done. I know that’s not the answer you want though!

Ultimately, I came to grips with it

I just use default everything and I think it looks great. Especially in VR!

It’s more about the overall picture of the entire world view to me, rather than how any individual block or character looks. It’s a nicely coherent style.

There are guides to create my own for some reason. I’m not doing that.

Why is this so hard?

It’s not quite as bad as all that IMO (but it is fussy). You can do one or both of:

I have a few of the RTX demo worlds installed, but when I try to create a new world and go to Resource Packs it says I have no resource packs.

when I try to create a new world and go to Resource Packs it says I have no resource packs.

Weird. I’m getting that same behavior on the 1.18 series now too (wonder if something changed?)

I usually use the Kelly’s RTX Packs series. But it appears that she removed them from the common web sites recently and moved the content to a Discord server instead. More info here if you want to try that one: https://www.reddit.com/r/minecraftRTX/comments/r8bu6q/where_to_get_latest_kellys_rtx_packs/

Beside the questbook GTCEu should include a tablet in-game that extensively documents all the features. Including process chains and multiblocks. It’s quite impressive, but it might be delayed from the first release.

In other news, the last GTNH dev version re-adds a controversial feature: pollution. And the number of quests climbs to an absurd 2980. But I’m told some of these are used as filters for other quests, so the active quest number may be lower.

I usually use the Kelly’s RTX Packs series. But it appears that she removed them from the common web sites recently and moved the content to a Discord server instead. More info here if you want to try that one: https://www.reddit.com/r/minecraftRTX/comments/r8bu6q/where_to_get_latest_kellys_rtx_packs/

In other news, whoever works in official capacity is still an ass.

An especially severe security vulnerability has been found that affects ALL Minecraft versions. Both official and Forge were fast to update, but Forge decided that going lower than 1.12 isn’t necessary.

“None of this sounds like a no-work quick fix, though, does it? Hence my warning. So why do all that work?”

This is a Forge dev not only dismissing the work, but even discouraging third parties to fix it. The reason is they think no one is playing 1.7.10 and that it’s not worth the effort.

The fun thing? The GTNH devs already patched it before Forge, across all versions: 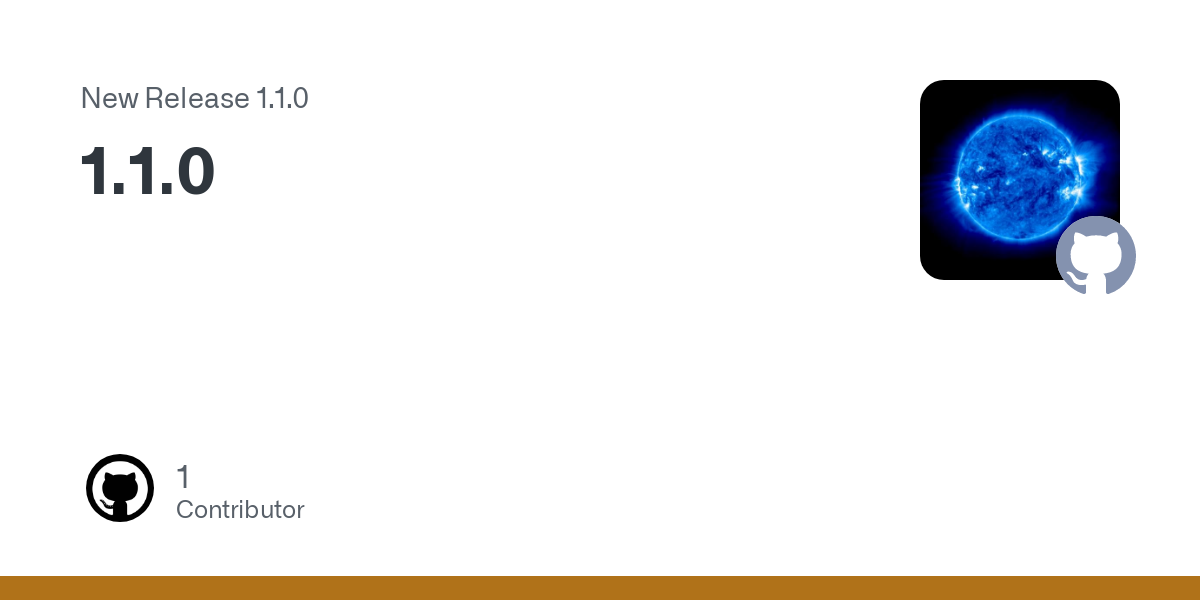 “Why no later minecraft revisions? Ask forge people not me. If they can hold back their hostility towards legacy minecraft mod developers I might consider adding a version for them, or they can copy over stuff and make it their own stuff.”

Forge devs are antagonizing the process so much that the 1.7.10 devs have tried to push a patch and Forge is not approving it.

The fix doesn’t even need a new version of the program, just a relaunch, since it works with metadata. So when you launch again an instance it will be automatically patched live even with an old version of MMC.

As always, it’s unpaid mod devs that carry the torch.

In today’s GTNH adventures, I saw a Blood Moon for the first time. So I’m huddled in a tiny stone house waiting for it to pass. Here’s what my minimap looks like: 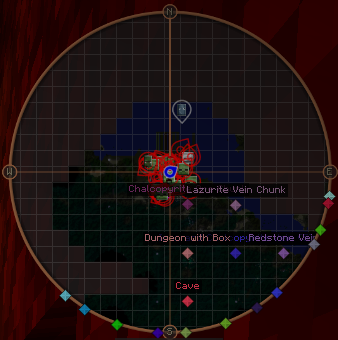 Each red circle/icon is an enemy.

My brother and I played a little GTNH while waiting for FFXIV: Endwalker to launch.

We got a blood moon while we were still in the early stone age. After many, many deaths, we made it to dawn, only to find a… drowning? creeper that promptly exploded in my face, creating a hollow sphere of stone that spawns hordes of legendary silverfish when broken and filling the center with water. I drowned, lost all my items, and then couldn’t get back to my grave between the water currents and stupidly destructive silverfish. To make matters worse, the sphere extended into our base, so that got flooded and taken over by silverfish too.

We ended up restoring a backup and turning mob griefing off. Whoever thought that creeper design was a good idea to include in GTNH is a jerk. 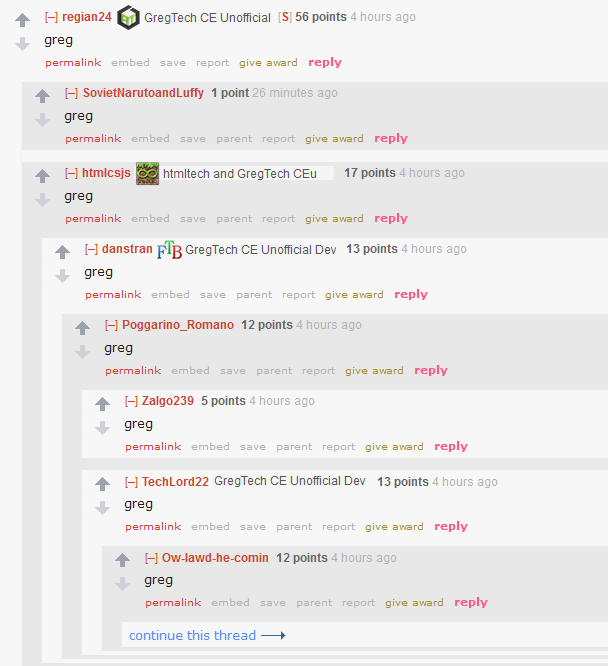 Having played just enough to understand what is being shown, those are some really nice improvements.