My best is 1030 on Berlin. I spent a lot of time trying to get the Berlin achievement for using only one train per line, can’t do it. Now that seems impossible.

Wow, you guys are amazing. I’ll keep trying I guess. I’ve tried about 15 times so far, close to 3 hours. I do like this level the best so far. Every other level hasn’t seemed challenging in a serious way. I have the last two levels still to finish, and then Berlin and Seoul.

Edit:
OK, I finally beat it. But I got lucky. Every week, I got the option of adding a new line, which has never happened before in all my previous tries. So it feels a bit like cheating.

Do you pick and and move trains @Rock8man? That is how I eek out some extra points when things start getting hairy.

I couldn’t stand not being able to play this game when I was away from my computer, so I got it for full price from the Google Play store for my phone.

And I love it! This game really fits a phone well.

Unfortunately, there is one fatal flaw in the phone version of the game. Unlike the PC version, where you can quit any time and then come back and resume your game, when you quit a level in the mobile version, when you come back and select that city again, you start over from the beginning. They don’t save your game. I could maybe understand doing this on PC, but on a phone?!?! Of course there’s going to be cases where I need to stop playing on the phone and do other stuff. Arrgh.

I still love it, but this is a horrible shortcoming. Especially for when you’re aiming for the more complex achievements like using only 3 lines in Paris, or using only one bridge to cross the Thames in London.

Here (on iOS), it saves the progress, but only if you don’t “exit” the level.

If you play, stop the game back to the home screen, do other stuff and launch it again (even purging it out of memory), it will start you over from where you left, directly.

Cool, I’ll give that a try.

Hey nice. I can confirm this works! Very cool.

This is certainly one of the best games of all time, isn’t it? My only real complaint is that I wished for more objectives. I wish I didn’t have to dig into the achievements for objectives. With that said, the achievement objectives are pretty devious and have kept me playing now for a very long time.

It’s not often that I play completely original games anymore. The last one that fit that description was “Papers, Please”.

Really is a great game. The achievements drove me on to keep playing it. I seemed to be pretty good at, going by the leaderboards at the time, but I found most of the high end achievements near impossible. I did get “Square Times”, which few people have.

OK, I finally beat it. But I got lucky.

I definitely think luck is a.major factor in this game. You can perform the same strategy on the same map, but a bad string of upgrade choice or a bad set of symbols and there’s not much you can do to avoid it .

After not playing for a while I played the daily challenge today, so if you want a score to shoot for - there it is! I think it resets in like 5 hours, so not a lot of time I guess.

I’ve never before seen a train game that treats the railroads totally transient. Usually these games are about planning a rail network that’s best suited to the distribution of stuff on the map, and then committing to that network for the long term. And then you either can’t change the track, or replacing it will at least come at such a heavy cost that you’ll have to make some compromises. In Mini Metro you can’t plan at all due to the all the randomness in station placement (not sure that the randomness of passengers is a big deal). So instead every new station (and every end of the week bonus) should be considered a call to rejig the whole network. It’s all tactics, no strategy or sense of commitment.

It’s an odd design, which I really should not like given how consistently it does the opposite of what I usually want in railroad games. But it just works super well, and is such an unique approach that it’s impossible not to appreciate.

I really, really hate the ability just teleport trains around at will. It gives a huge benefit, and seems to be only restricted by the player’s tolerance for tedious micro-management. And since this is at heart a score-chase game, it seems like you’d have to do this to be competitive on the leaderboards. An absolutely insane decision.

There’s a similar problem with building track that is basically used to run one train once, and then deleted and rebuilt elsewhere. But I’m less bothered by that. First, the design intrinsically depends on the railroads being totally malleable; it’s not clear how you’d prevent this. That’s not the case for teleporting trains. Second, these kind of track-removal shenanigans come at a heavy cost since it means you’re playing with one fewer “permanent” lines. And third, it’s not nearly as micro-heavy as optimal reshuffling of trains would be.

I did get “Square Times”, which few people have.

I think Square Times is impossible. I’ve been trying to get that achievement for over 50 hours now and it’s driving me crazy. I just don’t think it can be done anymore, so I’m going to move on to trying to get some others instead.

I just tried Square Times for the first time, and got it. Could be that I was very lucky, or that you’re missing some mechanic or trick.

Track looked like this at the moment of getting the achievement: 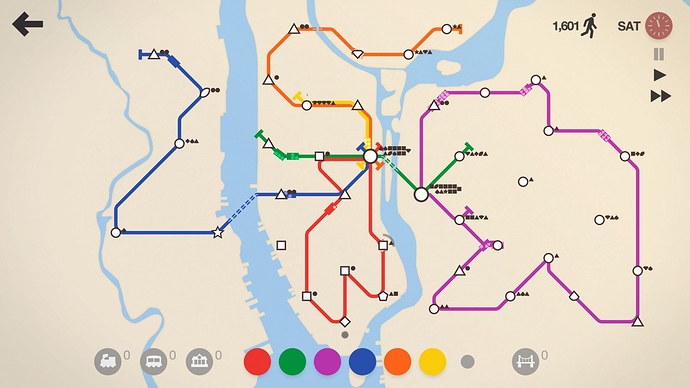 That was with two interchanges. Not sure if that’s normal on the NYC map, but at least one seems absolutely critical (the second one probably didn’t do much). The main funny business I did was teleport the green double carriage train from the square all the way to the eastern interchange if too much junk started piling up. (It was pretty much where half the map’s production had to go through). Probably had to do that around 10 times.

And obviously all those unconnected stations were occasionally part of the network. But the purple line was so obscenely long already that I alternated between two configurations for the eastern half of it rather than try to keep all the stations on the line all the time.

I pretty much agree with everything you said @jsnell about changing tracks and trains at will. At first it bothered me, but I just decided to play it for what it is and it works. I think hard mode doesn’t let you remove any stops, and may not let you move trains around, I can’t remember.

It’s tough to describe what goes wrong because each time it’s something different. 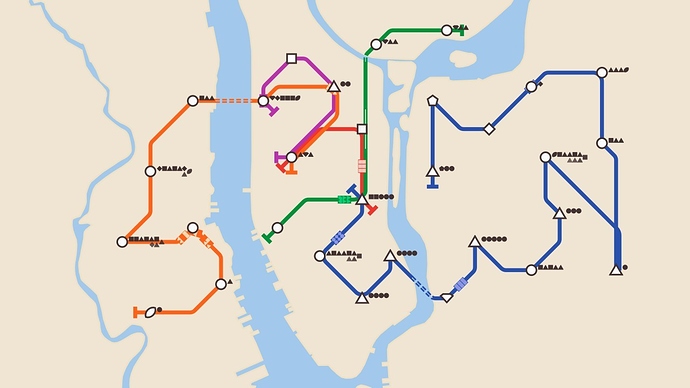 Originally I had the right side island divided up between green and blue tracks, and everything was going great. And then the stations in the north showed up, and I had to use a bridge to get to the north, so I had take the green track to the north and the blue had to take all of the mess that’s the east side. And then another week passed as I was trying to juggle tracks, and once again my only choices were a new line, which doesn’t help with bridges, or a carriage. I took the carriage, which helped me survive an extra few days on the West side, since I originally had pink go to the west side but couldn’t afford to take a bridge to the left anymore because of lack of bridges.

Anyway, so yeah, that was this time, but each time it’s something different.

It’s been awhile since I played, but my first thought is you should probably be completing the circuits. That blue line just seems too long to me without being connected to itself. I believe my goal was to have one linear line going across the map connecting each of the 3 sections. Then each section had its own circuit, with the middle section having the most lines.

There certainly is some luck involved though. Two bridges doesn’t seem enough, but I guess jsnell made it work.

Well, interchanges become more important when you chose not to go for more lines or more bridges. If you want carriages, you’re forgoing lines, but then you really need the interchanges.

In this latest one I went for carriages a couple of times, but never got the option for interchanges, so things quickly got out of control. It would have been fine if the people I had piling up at the main triangle is squares, but sooo many people wanted to go to the Cross. So the Cross congestion is what killed me this time. 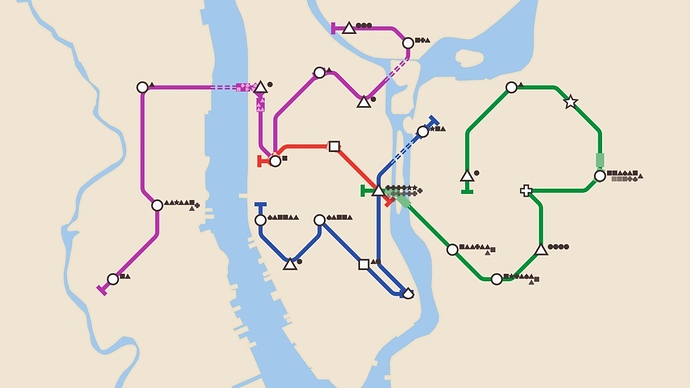 See, I think your green line is too long there. I would have made it a circuit then had the short red line connect it to the mainland. Since the red is so short it could have kept up with whatever the green dropped off at the connection.

Do you never do circuits?

Yes on other maps, I do lots of circuits. Circuits never seemed to work out for me on the New York map. Not without Interchanges anyway, and interchanges are very rare on this map. I know it’s supposed to be random, but I almost never get them on this map.

It also helps a lot if the stations on the left and right of manhattan can be a mixture of circles and triangles, instead of mostly all circles. That helps extend the game a lot.

Edit: For example, in one of my other games: 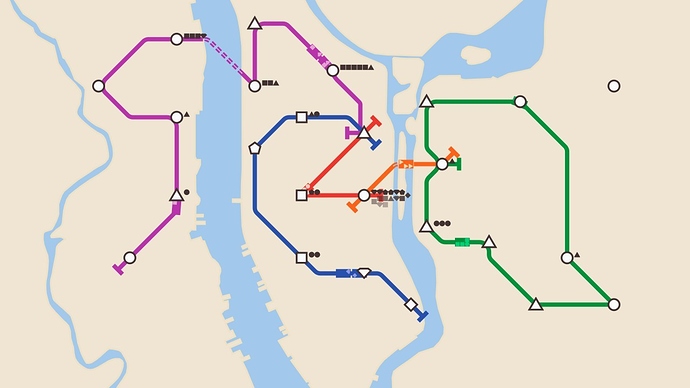