Nope. It’s been a long time since I played. When we moved to Florida the character cards were lost in the shuffle. I should check ebay to see if anyone is selling a set.

The Dino rider guy is from a Master Set: Rise of the Valkyrie that I have somehow.

The first is from the “Swarm of the Marro”, the second, smaller ‘base set’. The second is from the first, the “Rise of the Valkyerie” base set. He’s one of the orcs, or Gruts as they call them in the game. I never did get the “Swarm…” or Castle sets. Ah, well. 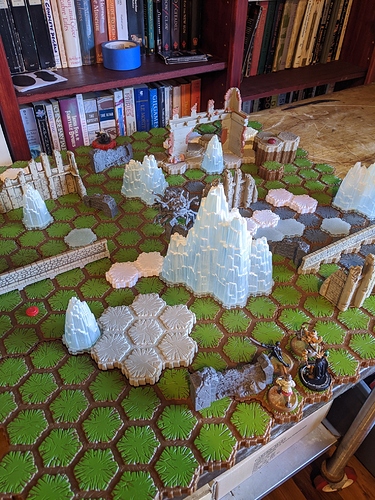 Nope. It’s been a long time since I played. When we moved to Florida the character cards were lost in the shuffle. I should check ebay to see if anyone is selling a set.

They used to have a nice set of smaller cards for all the official figures that you could print out. Easier to actually play with and store than the hex shaped cards that come with the game. Plus it saves the original cards from damage.
It is a brilliant game, and a shame the way it was handled. I did take full advantage when the big box stores were closing it out and have a closet full of HS stuff. I never did get all the expansions though.

Hah! I was a member of heroscapers for a long time. I should check back there.

Ah, here is the direct link:

Not sure what’s cool- the info about the figures you posted, or the pic I posted. So I’ll talk about them both.

If you have a box of random HS stuff that you want to identify, go to the HeroScape Wiki- it’s very comprehensive.

As for the thing I posted, I was talking about it upthread a bit. Frostgrave is a small unit/skirmish fantasy wargame that came out a few years ago (but I didn’t hear about until recently). It is figure-agnostic, though a company does sell specifically-branded figs. One of the micro-supplements expanding the game, Dark Alchemy, included rules and a 3-scenario mini-campaign for playing solo/co-op, which were later expanded in Perilous Dark. I have a ton of plastic fantasy figs and terrain floating around, including most of the HS stuff. So, (as I mentioned in that post) since I’ve grown tired of measuring tapes, I adapted Frostgrave to a hex map, and it worked great.

In that pic is mostly basic HeroScape terrain. The low walls are from the Volcanic set- they are meant to be part of a footbridge. The big wall is from the Marvel Comics HS set. The icebergs are from the Tundra HS set. Some of the other walls were from the PPP Rackham Confrontation set. The figs in the lower right are my warband, mostly HS expansions, but my wizard is WizKids Mage Knight figure. The ‘Alchemical Horror’ (unpainted) in the middle of the table is from the Mansions of Madness game, and the little rat at the top is a PPP D&D miniature- you can pick them up as singles online for pennies. Or at least you could- haven’t looked in a while.

An article came though me Google News feed the other day that said the Frostgrave designer is working on Stargrave, a sci-fi version. The premise and structure basically sound like Warhammer 40K Rogue Trader- the original version from way back in the '80s. Should be out next year. Given that he didn’t do a lot of changes between Frostgrave and Ghost Archipelago (it’s less-magic, more-tropical spinnoff) and Rangers of the Shadow Deep, I’m guessing this’ll be more of the same system with some sci-fi tweaks, which I’m totally on board with. As long as there’s co-op rules, and I get to pull out all my PPP Rackham AT-43 stuff. Woo!

Heroscape is pretty fun. I played it a bit with my older boy when he was younger (have 2x the starter set, which I picked up on sale many years ago) and we had a lot of fun with it. Hope to take it out again someday when my younger son has grown a little more.

It’s legit great. When I was digging all that stuff out, I found this folder of scenarios, including one I wrote up back in the day- a really cool “Battle of 5 Armies” map/army list. Each player got a (balanced? At least point-wise) themed army with a dragon (so many dragons!), and their own ‘home turf’ around a big central volcano in the middle of the map. Someday I’ll get the guys together to play it, I swear. Even if we’re all in the old folks home together by then.

Man, genuinely jealous of that Heroscape stuff. Are there any other games out nowadays that have a similar feel? As much as I love my wargames, most of them are too complicated to play with my kids. Would love something that is simpler and more streamlined, but with miniature war gaming mechanics.

Unfortunately, none that I know of.

That said, the resolution mechanic was literally lifted from HeroQuest- roll dice, skulls are hits, shields are blocks. There was another game published around the time of HQ, BattleMasters- basically the wargame equivalent of that dungeon crawler. It was actually kind of a giant-sized precursor to the Command & Colors game line- hex map, card-driven actions, etc. So any of the C&C games might work well (depending on the age of your kids, of course) Memoir '44, BattleLore (my personal preference), etc.

Edit: of course, you could build your own Battle Masters game. I think about it occasionally. Figs on stands from FFG’s discontinued RuneWars Miniatures Game are cheap. Print your own cards, make a map…

The thing that made HS cool from a kid’s point of view (at least judging from my 3 nephews who played it constantly the time I took a copy of the base game to the family Xmas gathering) is sadly the very thing that keeps it from being reprinted, and the thing that keeps there from being anything really similar out there now… the great big pile of cool plastic figures and terrain. Memoir 44 is close, lots of plastic and fairly easy rules, but lacks the “wow” factor of the HS stuff.

I see the Don came to the same basic conclusion while I was typing ;)

I see copies of the Rise of the Valkyrie Master set on BGG and Ebay every now and then, not cheap, but sometimes you can get one for a reasonable price. And there is a LOT of game in that one box, even without the expansions. Worth keeping an eye out for it.

I just went and looked on the google, and it seems that there are several folks making 3d-printable terrain tiles in the vein of HS- some even compatible with it. Given that, and that fact that the aforementioned heroscapers.com fan community has made stat cards for literally every plastic figure in the world (at least it seems that way…), you could roll your own HS set using whatever you’ve got handy pretty damn easy.

I’d actually say keep an eye on Craigslist or FB Marketplace to pick up HS stuff. People are less likely to know how much it goes for when they’re just cleaning out the old kid’s room…

Battle asters was amazing. I played that A LOT when I was a kid (11 years old or so, I think). But it was soooo big we could only play in my parents bedroom. 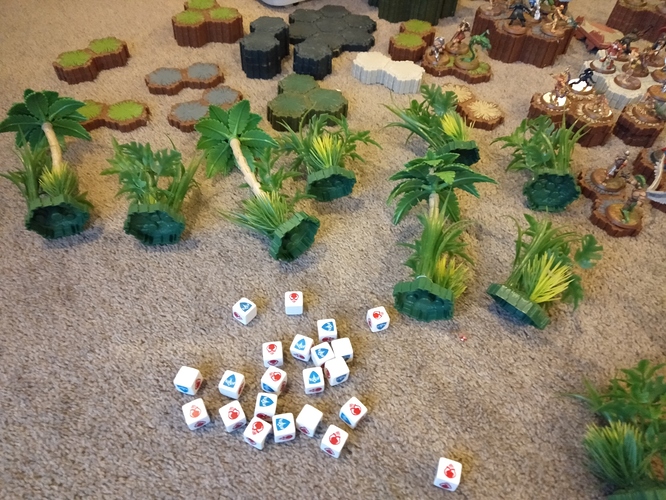