I guess if you weight the teams by population and give all of SoCal to the Dodgers and all of non-Boston New England to the Yankees, and the whole Metroplex to the Nats…maybe?

I’m a Rangers fan. They’re in full rebuild. Which is fine. Better that than pretending to be a contender and sucking with no chance at a good team anytime soon.

But my wife is a Dodgers fan. Thus, so am I. So I’m good on the national league side at least.

The Mariners managed to become a baseball embarrassment after the team president said things that were supposed to never be said publicly, and ended up pissing off the players, the Asian community, and being forced to resign days later.

(And yet it wasn’t the biggest Seattle sports story, because the Seahawks became embroiled in what feels like a mega divorce in the making with its star QB.)

With the Kraken preparing to enter the NHL next season, this sums up the current Seattle sports scene perfectly. 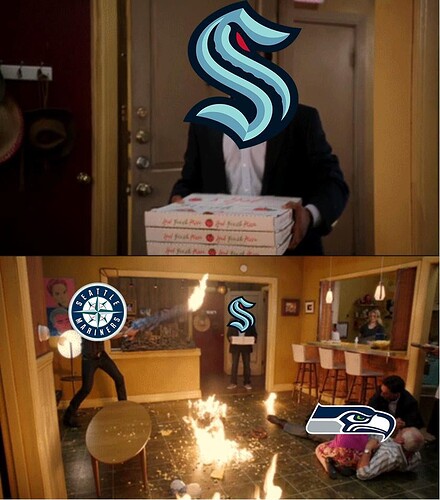 The Cleveland branch of the Dolans care, but not about the same thing fans do. Payroll is set to be around $50m on Opening Day and the team has no financial commitments beyond this year. The paranoid among us would also note that with a rebrand scheduled to complete in 2022 and the team’s stadium lease expiring in 2023 it’s the perfect time for them to sell and/or move the team.

I said it a bunch of times in the 2020 thread, but I would be so unbelievably incensed about everything if I were an Indians fan.

As horrible as naked robber-baron capitalism has made MLB in general, it’s honestly a great time to be a Twins fan – Derek Falvey has taken the occasional success of Terry Ryan’s good-ol-boy grit-n-manliness redass retrograde operation and turned it into a real modern baseball org. Honest to goodness, I love following the team now and Target Field is an absolute joy on a summer afternoon. What can you do?

A question from a discussion with some friends.

Is there a more forgotten mega-superstar baseball player of the last 30 years than Mo Vaughn? For a couple of years in the 1990s, he was simply the most imposing slugger in all of baseball. It was just on the front-end of the start of the steroid era, and by 2002 or 2003 his career was basically over.

I dunno if I can get there for Vaughn. Dude smashed some baseballs, for sure, but a steroid-era slugger on largely forgettable teams who couldn’t play defense?

Not denigrating his accomplishments, but “mega-superstar” to me is like Cal Ripken Jr, Alex Rodriguez, Mike Trout, Randy Johnson type of guys. Vaughn to me is more your garden-variety superstar ;)

We were just trying to name off MVPs of the 90s and aughts. And in the 90s we got them all…except for one AL MVP that decade. And this was with a Red Sox fan.

And all of a sudden it was like “Holy shit, Mo Vaughn.” And we were all thinking “Does anyone remember Mo?”

Do the Nationals care? I dunno, maybe. They seem to be following their strategy of creating a ‘good’ pitching staff and having a pretty terrible offense aside from Juan Soto. Many other teams in the NL East have improved greatly so I suspect they will have a forgettable year.

We were just trying to name off MVPs of the 90s and aughts. And in the 90s we got them all…except for one AL MVP that decade. And this was with a Red Sox fan.

I’m gonna be so happy when I can get fake-heated in conversations like this over a pint again!

(I’m totally keying in on the “mega-superstar” thing, to be fair. I think your larger point about Vaughn being forgotten relative to his accomplishments is perfectly legit.)

Do the Nationals care? I dunno, maybe. They seem to be following their strategy of creating a ‘good’ pitching staff and having a pretty terrible offense aside from Juan Soto. Many other teams in the NL East have improved greatly so I suspect they will have a forgettable year.

They traded for Josh Bell and signed Kyle Schwarber and they’re getting Joe Ross back from opting out last season and a health(ier) Max Scherzer and Stephen Strasburg. Plus they signed Jon Lester.

I’d say they care. The NL East is loaded, but they’ll have a say.

I’m gonna be so happy when I can get fake-heated in conversations like this over a pint again!

Same! We were talking over zoom, and there were beers involved…but not the same. Not the same.

Aside from the obvious, it’s also easier to enforce the no-Google rule in-person ;) “Why spoil a perfectly good argument with facts?” as my brother is fond of saying.

They traded for Josh Bell and signed Kyle Schwarber

I forgot about Schwarber but I’m not a fan of Bell. And when I think of their offence I think about Carter Kieboom at third base.

At this point the Dolans have done this song and dance for long enough the concern is that a sizable portion of the fan base is moving beyond incensed to apathetic.

Totally jealous of what you’ve got going on in MN right now (even though some of it is at our expense). And that ballpark always looks beautiful when I see it on TV.

holy shit the Cardinals actually might Gandalf the Dodgers’ Balrog? Gandalf me, baby, you know I’m the Balrog what the fuck is happening BAIL OUT

The Cardinals look the best in the NL Central to my eyes, but I still think they will be closer to a .500 team vs anything amazing unless they add on pitching and outfielders. Their infield is great but they are banking a ton on a very young outfield and their pitching depth isn’t great.

The Cubs, on the other hand, are innovating baseball. I don’t think I have ever seen a team intentionally sabotage a cost controlled core of talent as an excuse to not extend any of them. They purposefully chose to not fill holes for a few years and then are finishing it off by purposefully creating a bunch more holes just to create an excuse to finish off burning it down to run a clown shoes payroll for who knows how long under the guise of a rebuild that they didn’t actually bother to acquire any talent on the teardown as an excuse for it to last even longer.

Hey, it takes effort to go 108 years between World Series. They have a legacy to live up to.

It’s spring training. Does anyone give a fuck about some dude stealing second in the seventh? 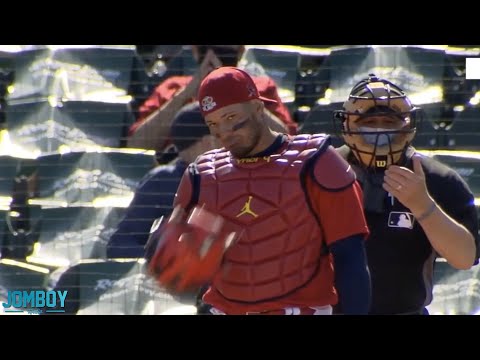 Yadi does. Yadi gives all the fucks, pathologically, every day. Love it.

(Also I am so very amused by Jomboy’s breakdown videos. Just a masterful use of the medium.)

That was indeed a thing of beauty.